Marjorie the Margin Gem and I have been bonding over the last three days. Winter storm Draco hit our area on Wednesday afternoon, causing my drive home from school to be rather scary. Things proceeded to get worse for those who were traveling, but Nancy and I hunkered down and rode out the storm with no difficulties. We had filled both of the woodboxes on Wednesday morning, pumped the cistern full of water, and purchased the groceries which were necessary for our plans. We were set.

The wind blew, and a heavy, wet snow fell during the night, putting our electricity out for a period of two and a half hours.  I love it when the power goes out, but ours rarely does, and I was disappointed that it happened in the middle of the night when I couldn't enjoy it.  However, at 9:30 on Thursday morning our power went out again and remained out until after four o'clock in the afternoon.  Other than the fact that we had to bathe instead of shower (our basement shower uses a sump pump to drain), a snow day without electricity was pretty much the same as a snow day with electricity for us.  I was terribly disappointed when the power came on before nightfall, though, because we weren't forced to use our oil lamps.  Next time maybe.

On Thursday, I checked papers because I honestly thought that we'd be in school on Friday.  We didn't get nearly the amount of snow that was forecast for us, and the sun was shining brightly.  What we couldn't see in our protected little valley was how windy it was everywhere else and what havoc that was playing with the roadways.  Thus, Friday was a snow day also, and while I should have been checking papers, I abandoned that task in favor of beginning to make goodies for Christmas.

I started by making caramels.  I remember when my dad first made these.  When he announced that he was going to be making caramels, I was excited because I love caramel anything (so long as it isn't contaminated with nuts).  I know that I was pretty young when he first did it.  I also suspicion that I was sick because I remember that he handed me the spoon to lick after I woke up from a nap.  I remember being colossally disappointed with that spoon.  You see, when Dad said that he was making caramels, my youthful mind assumed that the result of his efforts would taste exactly like the golden nuggets of goodness that came from Kraft.

Dad was delighted with them, however, and they have been a tradition at Christmas for a number of years now.  I think that they are my brother's favorite Christmas candy.  They are not difficult to make, and they are particularly well-suited to being cooked on a wood cookstove because of their long cooking time.  The recipe comes from the Kitchen Klatter Cookbook, a southwestern Iowa go-to cookbook which is a compilation of recipes from the radio homemaker show and magazine of the same name.  I give more details about the Kitchen Klatter legacy in my post about apricot bars.  I can't say enough good things about this mid-twentieth century cookbook.  It doesn't include a lot of beautiful photographs, and the directions are obviously written for people who have had some experience in the kitchen, but I haven't yet run across a recipe in it that I didn't like.  Many of the recipes have personal notes on them, and, having milked a cow for ten years, I appreciate the fact that they are very conscientious about telling you whether you can use "country sour cream" or "commercial sour cream" in the recipes which call for it.

This recipe appears on p. 457 in the candy section and is simply labeled "Caramels." To make them, you first combine 2 cups of sugar, 1 cup of cream, 1 3/4 cup corn syrup, a dash of salt, and 1 cup butter in a heavy-bottomed pan which has a capacity of at least four quarts.  Bring to a boil directly over the fire.

Once it has come to a boil, move the kettle to a cooler part of the range where it will continue to boil, and let it do so for a half hour.  Stir occasionally to make sure that it isn't scorching.

After the thirty minutes is up, add another cup of cream.  Put the mixture back over the fire until it returns to a boil.

Return the kettle to a cooler part of the range where it will continue to boil until it has reached the consistency you desire. 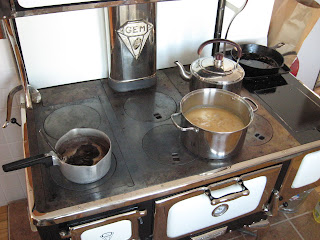 Here is where things get a little interesting.  You can use a candy thermometer to decide when the caramel is done cooking, but I prefer the cold water test because I have better luck with it.  What I do is put very cold tap water (not difficult to come by at this time of year) into a coffee cup.  Then I let a few drops of the candy fall off of the stirring spoon into the cold water.  When it isn't yet done, it makes a beige puddle at the bottom of the cup.


I take these caramels off the stove when they are at the softball stage.  At that point, the drops of caramel in the cold water look like this: 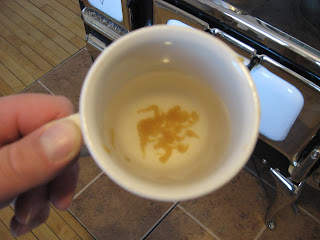 ﻿
When you stick your finger down at the bottom of the cup and stir everything around, the caramel forms a soft ball--hence the "soft ball stage."

If you want your caramels to be a harder finished product, you can cook the caramels longer.  When they are done, pour the caramels into a buttered 9 x 13 pan. 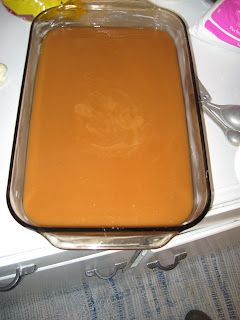 When they are most of the way cooled, cut and wrap.

Here is the way the recipe appeared in the original cookbook:


Caramels
2 cups sugar
2 cups cream
1 3/4 cups corn syrup
1/8 tsp. salt
1 cup butter (may be half margarine)
1 cup chopped nuts
Combine sugar, 1 cup of the cream, corn syrup, sal and butter
or margarine.  Boil 30 minutes.  Then add the second cup of
cream and boil until it makes a firm ball when dropped into
cold water or until it reaches 260﻿ degrees on the candy
thermometer.  Add nuts and pour without beating into well-
buttered pan.  Cut into squares when still slighly warm.
These have an old-fashioned, homemade taste that I hope you'll enjoy.﻿