Optimizing the Hot Water from Our Wood Cookstove

A few Saturdays ago, I was in a hurry to get as much laundry done as quickly as I could because I thought that the potential for rain was going to limit the clothesline drying time.  As I have said before, the range boiler on the Margin Gem has no trouble keeping up with the hot water demands of the high efficiency front loading washing machine. 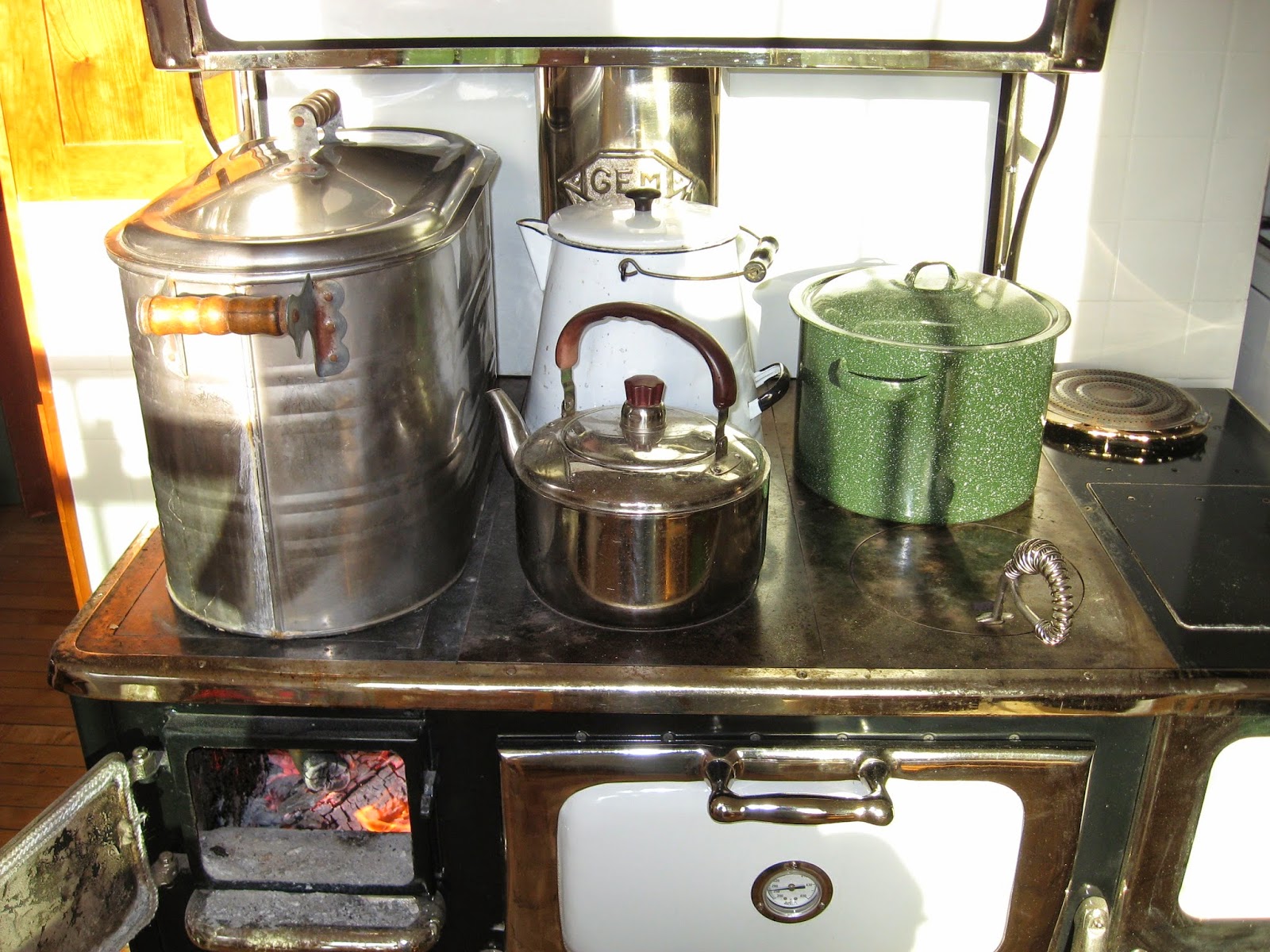 The problem is that cycles on that machine take just short of three years to complete, and I can get a lot of laundry done in very short order with a wringer washer.  Nancy needs her morning shower, though, and I've mentioned before that she is rather passionate about how hot her shower needs to be.  The recovery time on the water jacket/range boiler system is not as quick as on an electric or gas hot water heater, so I pulled out my old wash boiler.

I bought this stainless steel boiler at Walnut, Iowa, over a decade ago.  I chose it because it was in good shape, had a tight fitting lid, and was made of stainless steel.  I haven't used it very often (probably not often enough to make it worth the price I paid for it yet), and this was actually the first time that I used it on the Margin Gem.  Since the Margin Gem has both the reservoir and the hot water jacket, I hadn't felt the need to use it for quite a while.  However, the Qualified range was not equipped with either of these methods for heating water, so the wash boiler used to come in much handier.  One of the reasons that we chose the Margin Gem, though, was because the depth of its cooktop would accommodate this piece of equipment.

The capacity of the wash boiler is approximately ten gallons, so it is about double the size of the water reservoir attached to the right side of the Margin Gem.  I filled it to the top with cold water from the tap.  The water was entering the house at approximately 54 degrees Fahrenheit.  I had built a brisk fire in the stove and put the boiler directly over the firebox.  As you can see from the picture, I also had filled the teakettle and the 40 cup coffee boiler and put them next to the boiler, and the little green water bath canner had some water remaining in it from canning apple juice.  After I topped off the reservoir, I went outside to milk Bonnie, feed the bottle calves, and do the rest of the chores.

When I returned about an hour later, the water in the boiler measured 165 degrees F.  By the time I had my act together and was ready to wash (a few minutes later) the water in the boiler had reached 180.  Of course, in the old days people would actually boil their white clothes in their wash boilers, but in these days of more modern detergents and fabrics, that has been rendered obsolete, so I dipped the water out of the boiler into a bucket and hauled it down to the wringer washer in the basement.  There, I added quite a bit of cold water to get it to the point where it was a more reasonable temperature for washing, even though it was still plenty hot.  I did the same with the water from the other vessels on top of the stove and the water in the reservoir, supplementing with hot water from the tap heated by the water jacket.

CAUTION: Carrying such hot water this way is very dangerous!

I used the high efficiency automatic in tandem with the wringer washer and was able to get everything washed and hung out in time that it all got dry before the rain came.

To date, we haven't turned our electric water heater back on for the summer season.  We turned it off on Sept. 27, 2013, so that means that the Margin Gem has been fired every day since then.  I have a hunch that the warm, humid weather that we are experiencing right now is going to cause us to "go modern" pretty soon, though.

We hope everyone is having a great Memorial Day weekend!