While we have been waiting for the house kitchen to progress far enough that we can install Marjorie the Margin Gem, precious little baking has been done around here since June.  I've mentioned in other posts that we have a couple of 20" propane stoves in the basement that we've been trying to limp along with, and we've learned to do some baking in the electric roaster, but neither of these methods are quite satisfactory, especially since the ovens on both of the stoves are wonky.  The one that I thought was stuck at 350 degrees no matter what seems not to be so attached to 350 as it used to be and has begun to run a little too cool for anything other than roasting or cooking things "en casserole."

Side note: I'm amused at how cooking on a wood burning cookstove gets in your blood and changes your thought processes.  When I began to notice that the oven on the propane stove wasn't hot enough and knew that turning the dial resulted in nothing, I experienced a fleeting moment when my mind was instinctually wondering what small sticks or corn cobs I could put in the broiler drawer to get the oven hotter.  Obviously, I didn't go so far as to try such an outrageous thing, but nonetheless, the thought most certainly crossed my mind before I was jolted back to reality by the cognizance that I could easily burn our house down by doing a thing like that.

At any rate, when Nancy suddenly remembered that she might need a pan of bars for our church's potato bake tomorrow, our only real options for accomplishing such a thing that had any sort of quality were to travel to either her folks' or my folks' houses and bake there or fire up the range in the summer kitchen.  We had already been away from home twice today, so I wasn't too excited about going anywhere and therefore chose to build a fire out in the summer kitchen.

The last time that I cooked on a wood cookstove was for the family reunion in August.  For me, this has been a long, long time.  In fact, this is the longest I've been away from a cookstove in ten years, and I've just got to say that tonight's baking felt good.  I trust that other wood cookstove enthusiasts out there will know exactly what I mean.  Standing next to a wood cookstove that is hot enough to bake in just plain feels right to me.  I probably can't even describe it adequately, but tonight while I was down in the summer kitchen working over the stove, it struck me that I feel like a stove ought to be a presence and a personality rather than a sterile, dead box.  Even in the summer, when the heat of the cookstove literally drives me out of the summer kitchen, it seems like it still subconsciously feels right.

Anyway, enough with this waxing poetic.  On to the recipe and pictures!

Tonight, I decided to make Rosalie's Spice Bars.  Rosalie is a former neighbor and longtime family friend, and she is an excellent cook.  Many recipes in my family's boxes bear her name.  Generally, our family simply calls these "Raisin Bars" because the raisins are really more the star ingredient than the two teaspoons of cinnamon which constitute the only spice in the whole recipe.

I chose this recipe tonight because it makes a large batch of bars, but I consider it a good wood cookstove recipe because you have to parboil the raisins before baking the bars.  I think that any recipe for something that starts with top-of-the-stove cooking but ends with baking is particularly well suited to the wood cookstove because it allows you to utilize the heat that the stove is emitting while you wait for the oven to heat.


Rosalie's Spice Bars
1 and 1/2 cups raisins parboiled
1 cup reserved raisin water
1 cup shortening at room temperature
1 1/2 cup white sugar
2 eggs
1 1/2 tsp. baking soda
1 tsp. vanilla
2 tsp. cinnamon
3 cups all-purpose flour
Start by placing one and a half cups of raisins in a saucepan.  Put enough water over them to cover them.  Place directly over the firebox and bring to a boil.  Once they have boiled, pull them over to the coolest part of the cooktop to steep for bit while you mix the other ingredients.

Cream the shortening and the sugar until fluffy.  Beat in the eggs.  Mix in the soda, vanilla, and cinnamon.  Drain the raisins, reserving the one cup of liquid.  Add the flour alternately with the hot raisin water.  The dough will be kind of fluffy.  Fold in the cooked raisins.  Pour into a greased 12" x 17" jelly roll pan.  Bake in a moderate oven until a fork inserted in the center tests done.  Let cool and frost with caramel frosting or cream cheese frosting.  We always use caramel frosting.  I'll put that recipe in a later post. 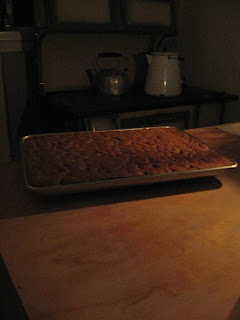 They should be cool enough to frost now, so I'd better go take care of them.  They will be delicious!
Posted by Jim at 8:51 PM No comments:

Email ThisBlogThis!Share to TwitterShare to FacebookShare to Pinterest
Labels: baking in a cookstove, wood cook stove 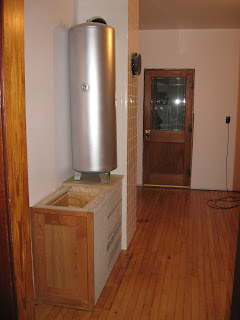 When we got home tonight, we discovered that we are one step closer to having Marjorie the Margin Gem installed in our house kitchen.  Our cabinet builder installed the woodbox/boiler stand that will be behind the cookstove.  The carpenter brought the boiler in (which we spray painted the silver color) from the shed and put it where it will stand so that we could see what it would look like.  The bottom cabinet is a large, deep drawer that will be our woodbox.  The part that is Durock will be covered with tile to match that which is on the chimney (last week's progress).  Many things have to be done before the stove is in, but we can see movement!
Posted by Jim at 6:51 PM 1 comment: