Baking Pies in the Wood Cookstove

Though this post is a couple of months late, I wanted to document baking the Thanksgiving pies for our 2011 Thanksgiving dinner.  Of course, I had wanted to be baking in the house kitchen by November, but that was not to be.  Thus, since Nancy and I were in charge of pies for Thanskgiving, we ended up baking them down in the summer kitchen.

The first thing that I always do when baking pies in a wood cookstove is to build a good, hot fire.
Most double-crusted pie recipes say that you should start baking the pie at 400 degrees or thereabouts for about ten minutes.  Then, you reduce the heat to 350 for the duration of the baking time.  This is to cook the crust first so that it won't be soggy and then cook the filling at the lower temperature until it is done.  Of course, when you are cooking with an electric or gas stove, this temperature change is easily accomplished.  With a wood cookstove, techniques for regulating the oven temperature for pie baking vary.  Here are a few suggestions:

a) Compromise the two temperatures and adjust baking times accordingly.  I have often had great success by maintaining an oven temperature somewhere between 375 and 400 and judging the doneness of the pie by the browness of the crust.  This is the method that I most frequently use.

b) Have your usual, steady wood fire burning on the grate, then heat the oven to 400 by adding very small pieces of kindling, corn cobs, small sticks (what I think of as "biscuit wood"), etc.  These burn quite hot, but do not burn long.  Thus, once the pie is put into the hot oven, a larger log can be added to calm the hot fire created by burning the small fuel, reducing the heat of the oven.

c) Some cooks advocate opening the oven door for awhile when it is time to reduce the oven temperature.  I've done this on occasion, but I don't recommend it because some baked goods are too delicate for this kind of temperature shock.

d) If your cookstove is equipped with a water reservoir which sits next to the oven side, I've read that you can be ready with a bucket of cold water to pour in it when it is time for the oven temperature to be reduced.  The addition of the cold water to the reservoir robs BTUs from the oven.

e) In the book Woodstove Cookery: At Home on the Range by Jane Cooper (a book which I should dedicate a blog entry to), guest contributor Barbara Streeter stated: "Fruit pies are the best in a wood stove.  If you have no thermometer on it--just build the fire real hot, till it's mighty uncomfortable to put your hand in the oven to test it.  Then quick put the pie in the bottom and let the fire die out slowly.  After forty-five minutes, it should be done.  If juice runs over onto the oven, shake some salt onto it and it will burn to a crisp and will easily brush away."

Anyway, the first pie that I assembled was the raisin pie. This pie is one of my favorites; unfortunately, I was the only one who ate a piece of it on Thanksgiving. I remember a family Thanksgiving many years ago when my grandmother on my dad's side made a raisin pie. I had not had raisin pie before that, and it was not until the mid to late 1990's that I finally ran across a recipe for it in a Reminisce magazine.

I always make this pie for our local town's Fourth of July celebration, and I don't think there's ever been a piece left at the end of the afternoon. Because our kitchen was all torn apart this summer, I made our Fourth of July pies at my parents' house and somehow managed to lose the raisin pie recipe between there and here. Thus, I was excited when one of my fellow faculty members at school suggested that I look for the recipe online.  I was easily able to find it here: Raisin Pie Recipe. Don't pay any attention to the negative reviews. I've recently found this same recipe on another very popular recipe site, and all of the reviews are quite positive.

This is a good wood cookstove recipe because while your oven is heating, you take advantage of the hot stovetop to prepare the filling.

Grandma Ford's Pumpkin Pie
1 cup sugar
2 cups pumpkin
1 1/2 cups milk
1/2 cup cream
(if you want to omit the cream, use 1 3/4 cups of milk)
2 tablespoons flour
2 tablespoons molasses
3 well-beaten eggs
1 tsp. salt
1/2 tsp. nutmeg
1/2 tsp. ginger
1/2 tsp. cinnamon
Combine all ingredients.  To ensure even distribution of the spices, mix them into the molasses before adding it to the rest of the custard.  Makes two nine-inch pies.
The recipe says to bake at 400 for ten minutes, then 350 for forty minutes.  I find that it is more reliable to insert a table knife half way between the edge and the center of the pie.  When it comes out clean, the pie is done.  I also notice that once the custard has risen to a uniformly shaped mound, it is ready to come out of the oven.  It will fall almost immediately and look the way we all expect pumpkin pie to appear.
﻿

Things took a turn after that.  I mixed up a pecan pie.  It looked beautiful.  It smelled beautiful.  It was going to taste beautiful.  As you can see from the picture below, however, it didn't look so beautiful on the floor.  While I was taking it out of the oven, I managed to drop it!
The problem was that somehow, during the family reunion back in August, the pics of which are here, the right hinge of the oven door got broken.  Unfortunately, this makes removing baked goods from the oven a two-person affair.  I thought that I could get the pecan pie out without help, but I was wrong.  Balancing the oven door on my knee and removing the pie turned out to be too much, and the pie suffered the consequences.  I started over on the pecan pie, but the second one was not as pretty, so I'm not going to blog about pecan pie here.

The last pie to be made was an apple pie.  It's getting late, and this post is already quite long, so I'll just show you some pictures of the process.  Really, apple pie needs its own blog entry anyway, don't you think? 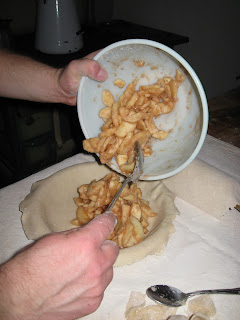 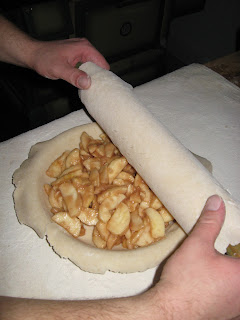 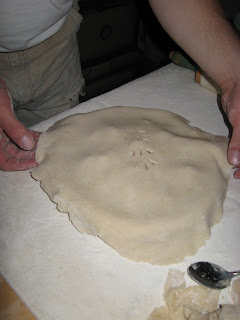 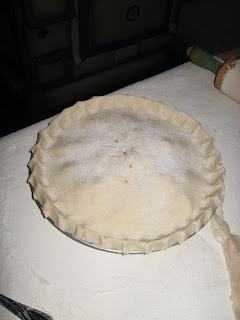 I wish that we had gotten some shots of the finished products, but hindsight is twenty-twenty, you know.  Hopefully, I'll get better at this blogging thing.  At any rate, the pies were delicious, and baking them in the wood cookstove contributed to their excellent flavor.

If you bake in a wood cookstove, please leave a comment and let me know about some of your methods of regulating the temperature.
Posted by Jim at 8:46 PM 8 comments:

Marjorie the Margin Gem Cookstove Is in the Kitchen

In the ongoing saga of our kitchen renovation, we are getting a little closer to the installation of the wood cookstove.  Delays have been numerous, but I don't want to go into that here.  I did want to share a few pictures, though.

Our nephew visited us last week, and as he and I were playing jump around the house (in which he did all of the jumping and I did all of the lifting), he "jumped" into the firebox of the stove as it sat awaiting the plumber to return to finish the job of connecting it to our water supply.  We thought that the picture was too cute to pass up.

At any rate, as we were shopping for our new cookstove online, one of the things that frustrated me was that there seemed to be a deplorable lack of photos of the Margin Gem from all angles.  As the back of our cookstove will be quite visible from the dining room and immediately as you enter the back door of the house, I was very curious to know what the back of the Margin Gem looked like.  The back of the Qualified range sat farther out into the kitchen, and it was quite visible.  Unfortunately, it was also not very attractive.

While we were doing our shopping, we seriously considered the Heartland Oval, but the optional heat shield which can be attached to the rear of that cookstove was not only expensive, but also rather unsightly when compared to the Margin Gem. In the pictures, you see the stove moved out into the kitchen.  Nancy and I moved it this morning in order to facilitate the plumber continuing his work today.


As you can see, progress is being made, but I am having a tough time being patient.  As I write tonight, a howling north wind is making our temperatures plummet, and the forecast high for tomorrow is in the low 20s.  This is the time when having a woodburning cookstove is most ideal, and all we can do is stare at ours.  I wish that we could have re-installed the Qualified while we waited, but Nancy was right when she nixed that idea because it would have been quite an imposition on the male family members who would have been called upon to move it over and over.

All I can say is that I hope that the stove is installed and operating by the end of January and that February brings us several snow days during which I can stay home and cook up a storm.  Fortunately for everyone else, I'm not in charge of the weather.

As we progress with the stove assembly, I'll post more pictures in an effort to provide the internet with a place that shows the details which seem to be missing out there in cyberspace.  If you don't see a view of the Margin Gem that you'd like to see, please post a comment, and I'll try to get a picture that satisfies your curiosity.
Posted by Jim at 7:32 PM No comments: