This is tradition in our family because this is always what my Grandma Marian served on Thanksgiving.  Today, I want to share with you her recipe for "White Salad."  This is my favorite fruit salad, and when Grandma was still cooking, it was hers too.  My mother and aunt were reminiscing about the fact that she used to take it everywhere.  It is delicious, and it was the first leftover to be finished off.  I don't know why I don't make it more often because it's really not difficult either.

Here is what you'll need:

Early in the morning or the night before the meal, you will need to make the first part of the salad dressing.

1. Have your fire hot enough to boil a little bit of water in the bottom of a double boiler.

2. Before putting it over the hot water, lightly beat two eggs in the top part of the double boiler. 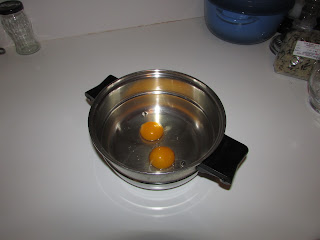 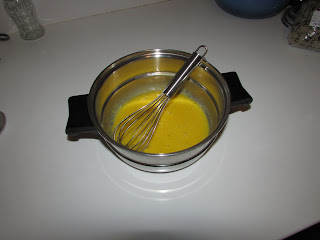 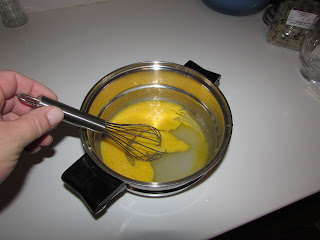 4.  Once thoroughly combined, put the top of the double boiler over the boiling water. 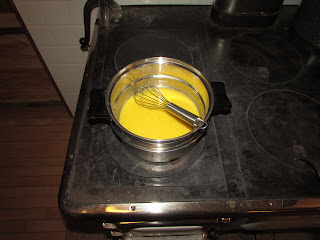 5. Stirring constantly, cook until it has thickened enough that it coats a spoon.


6. Remove from the heat and cool slightly.  Cover, then chill thoroughly in the refrigerator.  (This doesn't take that long because there really isn't that much volume here.)

7. While the dressing is chilling and long before you plan to assemble the salad, wash the grapes and cut them in half.  Place them on paper towels to dry.  Also drain the cans of mandarin oranges and pineapple tidbits.  Let them rest in a colander for quite a while.  You want the fruit to be as dry as possible.

8. Once the cooked part of the dressing is thoroughly chilled, beat the whipped topping or the whipped cream into the custard part.  The directions for the amount of whipped topping literally say "until it looks right" on the recipe that I copied from Grandma.  This was the phrase that she and her mother both used when they tried to tell someone else how they cooked by guess and by golly. 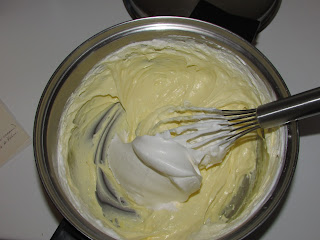 I don't really think you can mess up this part.  If you want to make this salad larger by adding more fruit, you can always add more whipped topping to the custard at this step.  The only thing that will happen is that the sweet and sour flavor of the dressing will tend toward the sweeter side. 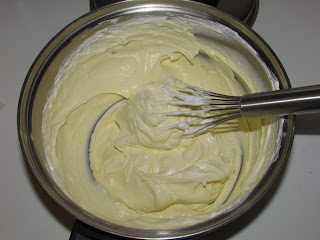 In the pictures here, I would say that I added about one and a half cups of whipped topping.

9. Combine the fruits and then fold in the dressing. 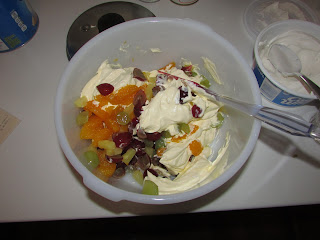 10. Add about a cup of miniature marshmallows.  DON'T SKIP THIS STEP in an effort to cut back on the calories.  The value of the marshmallows is not so much in the flavor as it is in their ability to absorb the juices which will be drawn out of the fruit.  Their primary function is to keep the salad from turning watery. 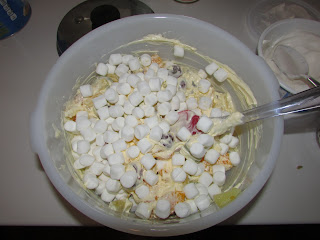 11. If desired, garnish the top of the salad with a red cherry or more.  Refrigerate until serving. 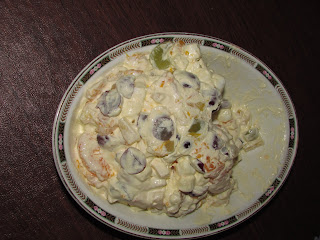 The last picture above didn't get taken until the salad had been passed around the table once.  That's why a chunk of the salad is missing on the right side.

You will note that the salad dressing doesn't appear very white.  That's because my chickens are free range, so their egg yolks are darker than what you would get out of the store.

This is really an excellent fruit salad: tangy, sweet, and colorful.  Bon appetit!

What Does "Back of the Stove" Mean?

Sorry.  I'm excited that this is my 200th blogpost!

In actuality, this phrase even predates the most common designs for woodburning ranges, so we have to go back in history a little to understand it fully.

When household cookery began to move from open fireplaces to cast iron stoves, the stoves were built with very low fireboxes at the front, which then vented toward the rear of the stove beneath an oven, the bottom of which was even with the level of the cooktop, as in the picture below:

This stove design then changed to have the oven be tucked under the cooktop, and the firebox was raised to a more comfortable height. Cookstoves then looked like this:

A door is open on the oven in the picture above, but the photos only show one of the two oven doors on each stove since each of these cookstoves was equipped with an oven which could be accessed from either side.

This type of cookstove was usually installed with the firebox side toward the room as in the first picture above.

Thus, the firebox side was literally the front of the stove, and the cooler, rear part was at the back.  The phrase "back of the stove" meant the cooler part of the cooktop.

As with so many things in the human experience, our tools changed before our terminology did.  More recent stove designs put the firebox on the left (only rarely on the right), and the cooler part of the range top is now on the side of the stove instead of the back.

In the pictures below, you can see the firebox on the left side of the Margin Gem, and in the second picture you see a saucepan and our teakettle "on the back of the stove." 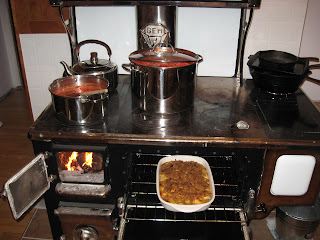 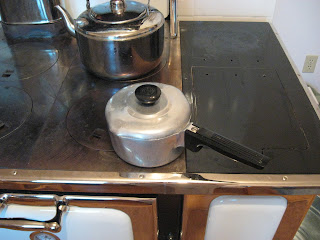 Basically, the phrase "back of the stove" means the coolest part of the cooktop even though it is no longer necessarily at the stove's back.  The phrase indicates an area used for slow cooking and keeping things warm while still having direct heat.

I hope that clears things up for everyone who might have been wondering!