I had a request for more information and pics of our summer kitchen, so I thought I'd write a quick post about it.  Our summer kitchen is just a Tuff Shed that we purchased in July of 2009.  Originally, we were thinking about having a farm store/bakery at the end of our driveway.  We spent Saturdays of the fall of 2009 baking breads, pies, and cinnamon rolls in the Riverside Bakewell cookstove down there.  We opened for a few Saturdays in 2010, but we decided that for various reasons the reality of having a farm store/bakery was not what we had envisioned it to be.  Thus, the building is now just called "the summer kitchen" or "the shed" and is used occasionally for canning and cooking, but mainly just for storage.  If we ever get our dilapidated garage torn down, I would like to move the summer kitchen up closer to the house where I'm sure that it would get more use.

We wanted to be as economical as possible, so we chose a 10'x12' shed because that was the largest building that we could erect without having to go through the difficulties of county permits.  We painted its exterior to match the paint scheme of our house, and we hung drywall and pegboard on the inside, finishing with trim around the windows and door and baseboard.  The following pictures were taken last November. 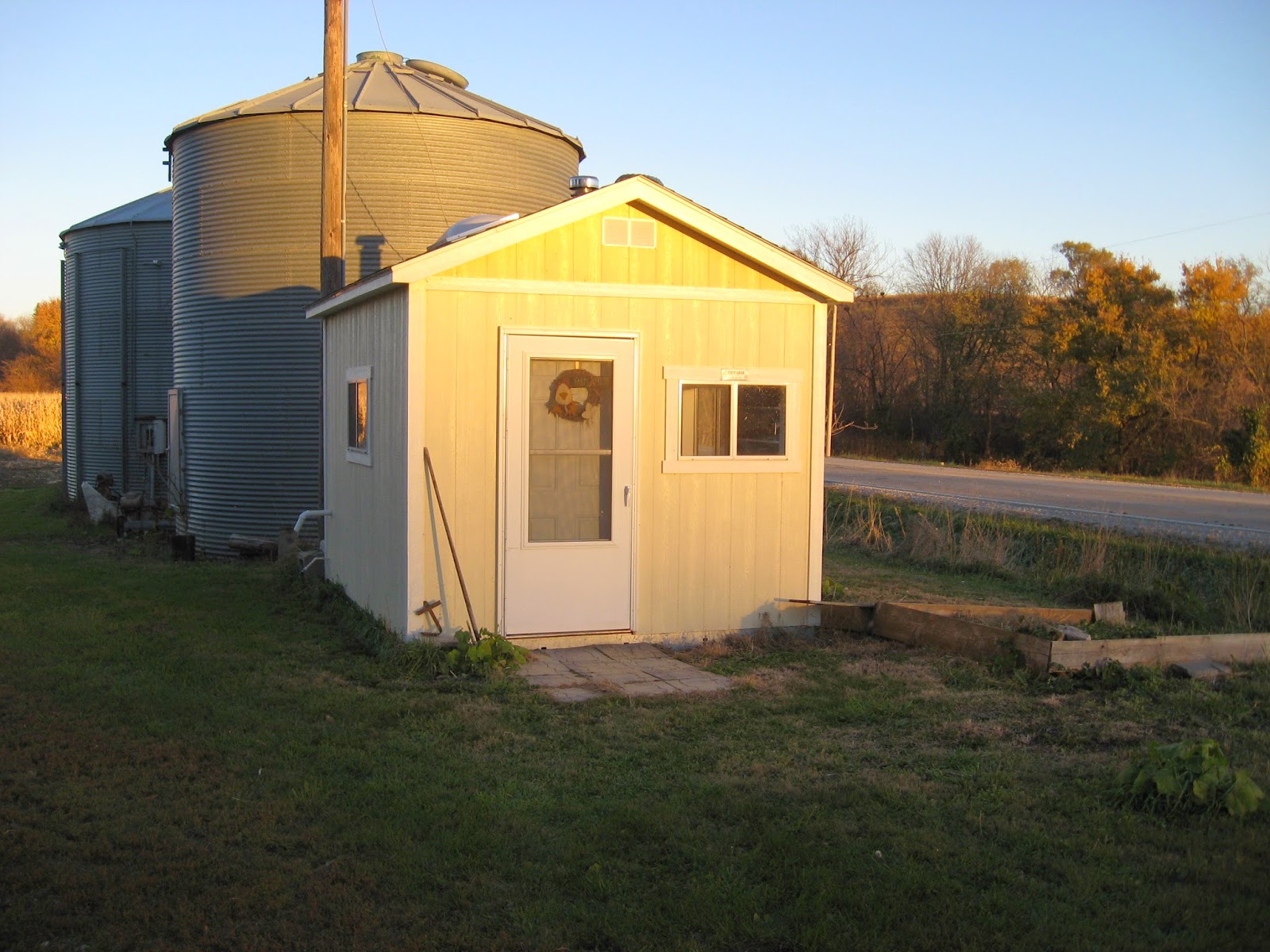 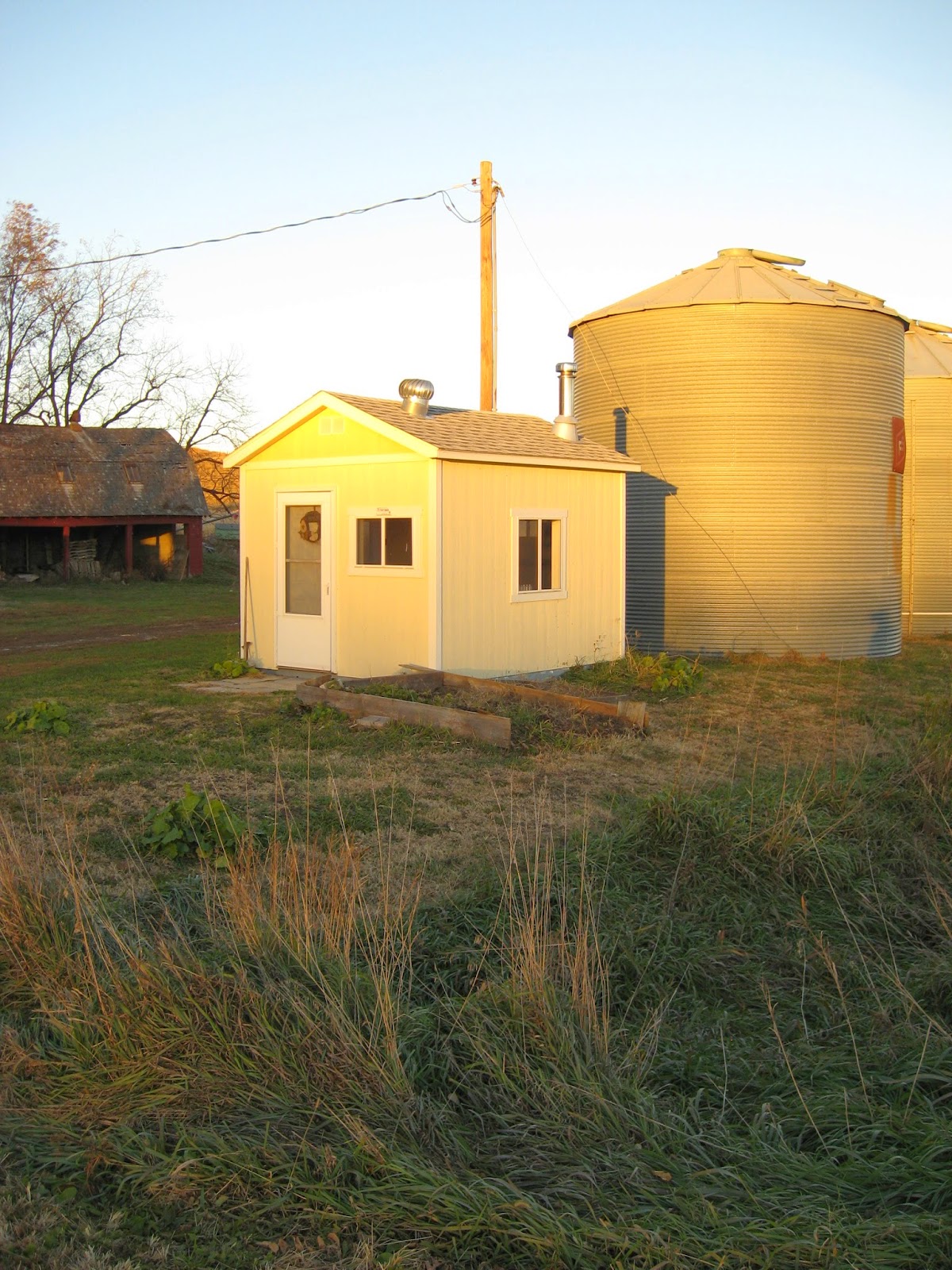 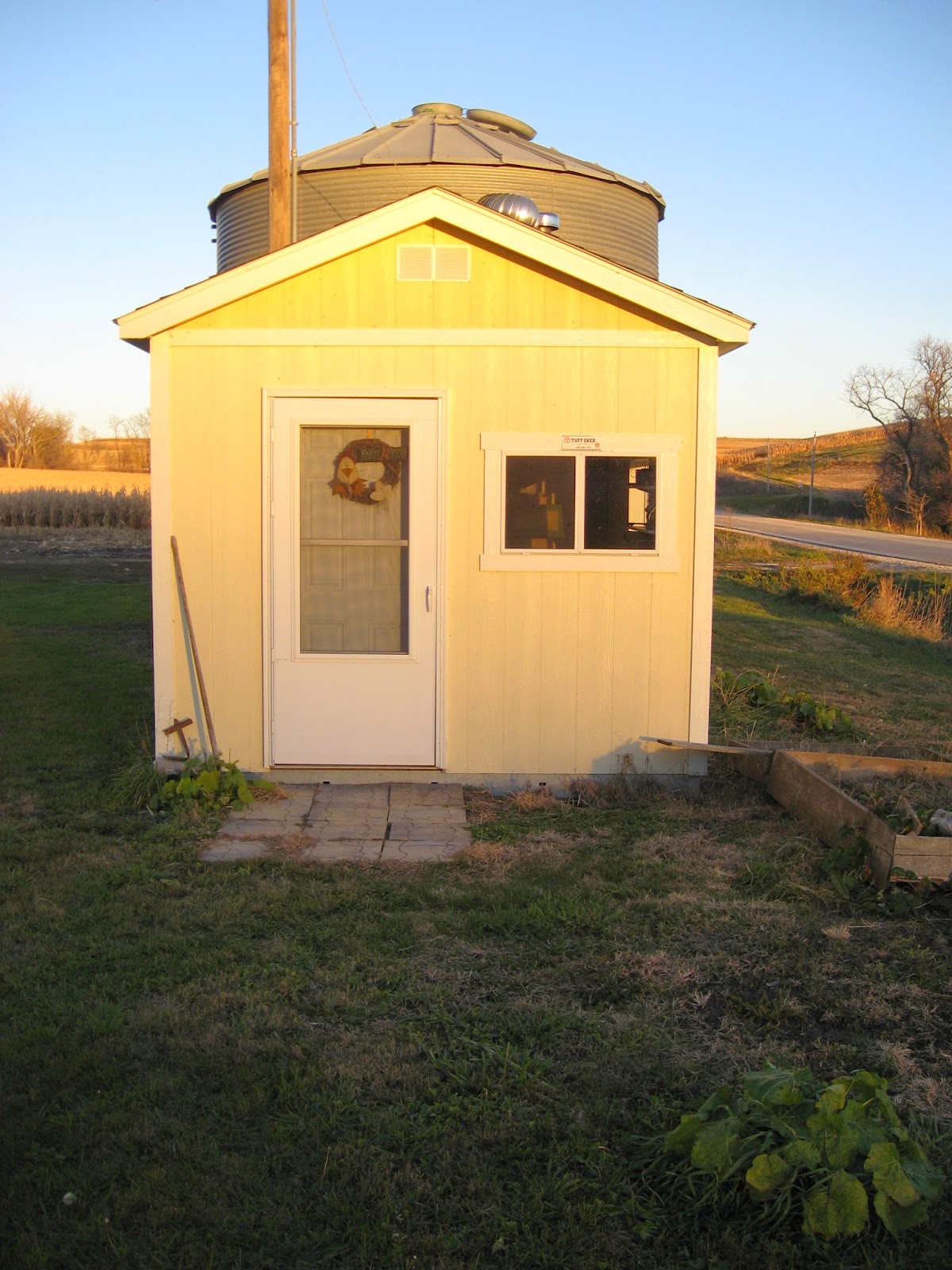 The first thing that catches your eye when you walk in is the green and cream Riverside Bakewell cookstove.  I purchased this stove at an estate auction in McClelland for either $240 or $260--I can't remember which.  The fellow who owned the estate had refurbished the stove so by putting a new oven box in it.

As the pictures show, the chimney situation for the stove is not great.  When you buy a Tuff Shed, you order your shed according to the specifications that you request from your salesman.  Then Tuff Shed sends an installation crew out to assemble your shed on your property.  I had negotiated with my salesman to have the Tuff Shed people install the chimney for the stove since they would be assembling and shingling the roof.  Unfortunately, the message about the chimney did not make it from the sales desk to the crew foreman's clipboard, so while I was able to convince the crew to install the chimney, the situation was not good and the chimney did not end up being installed correctly.

This made for some extra difficulties in attaching the stove pipe to the chimney, and my extremely poor sheet metal working skills were no help (hence the two ninety-degree elbows just above the warming oven).  After reading some things from Woody Chain about stovepipe and chimney installations, I think I'm going to endeavor to at least partially rectify this situation.

This seems a good time to point out that we do not carry insurance on our summer kitchen building.  I don't know of any insurance company who would insure a building with a stove that is connected to an improperly installed chimney.  Furthermore, because of the limited space in the shed, the stove is installed WAY TOO CLOSE to the walls.  You can see that the rear wall of the shed is protected by sheets of quarter inch concrete board which are fastened to the studs using electric fence insulators.  These prevent the heat of the stove from burning down the summer kitchen, but I'm only comfortable with this arrangement because of the fact that while the stove is in use, we are always right there with it (and our bedroom is not above it!).


To the left of the stove is the sink.  This cast iron beauty was rescued from an Omaha dumpster by my uncle.  We had the sink refinished by Nebraska Permaglaze, and now it is my second favorite feature in the summer kitchen.  Naturally, it only has a cold water spigot which is fed by about seventy-five feet of hose attached to one of the farm's hydrants up the hill.  The drain is connected to pipe which goes out of the side of the summer kitchen and angles down toward a five gallon bucket.  Waste water is then used to water the lawn around the shed.  The pipes for the sink are visible on the left side of the first picture above.﻿
The view below is looking from the sink to the south side of the room.  You can see that the stove sits on a prefabricated stove pad purchased at Menards.  We painted the floor with Dutchboy porch floor paint, and I have been very impressed with how well it has held up.  The counter top is made of cheap pieces of plywood, cut to fit over old metal Youngstown kitchen cupboards.  These cupboards were installed in our house's kitchen by my grandparents in the early 1950s.  They took them out in the late 1970s and put them in the basement.  Then, when the basement was redone, the cupboards went to the garage.  I removed the handles, cleaned them up, spray painted them, put the handles back on, and they are now back in commission. 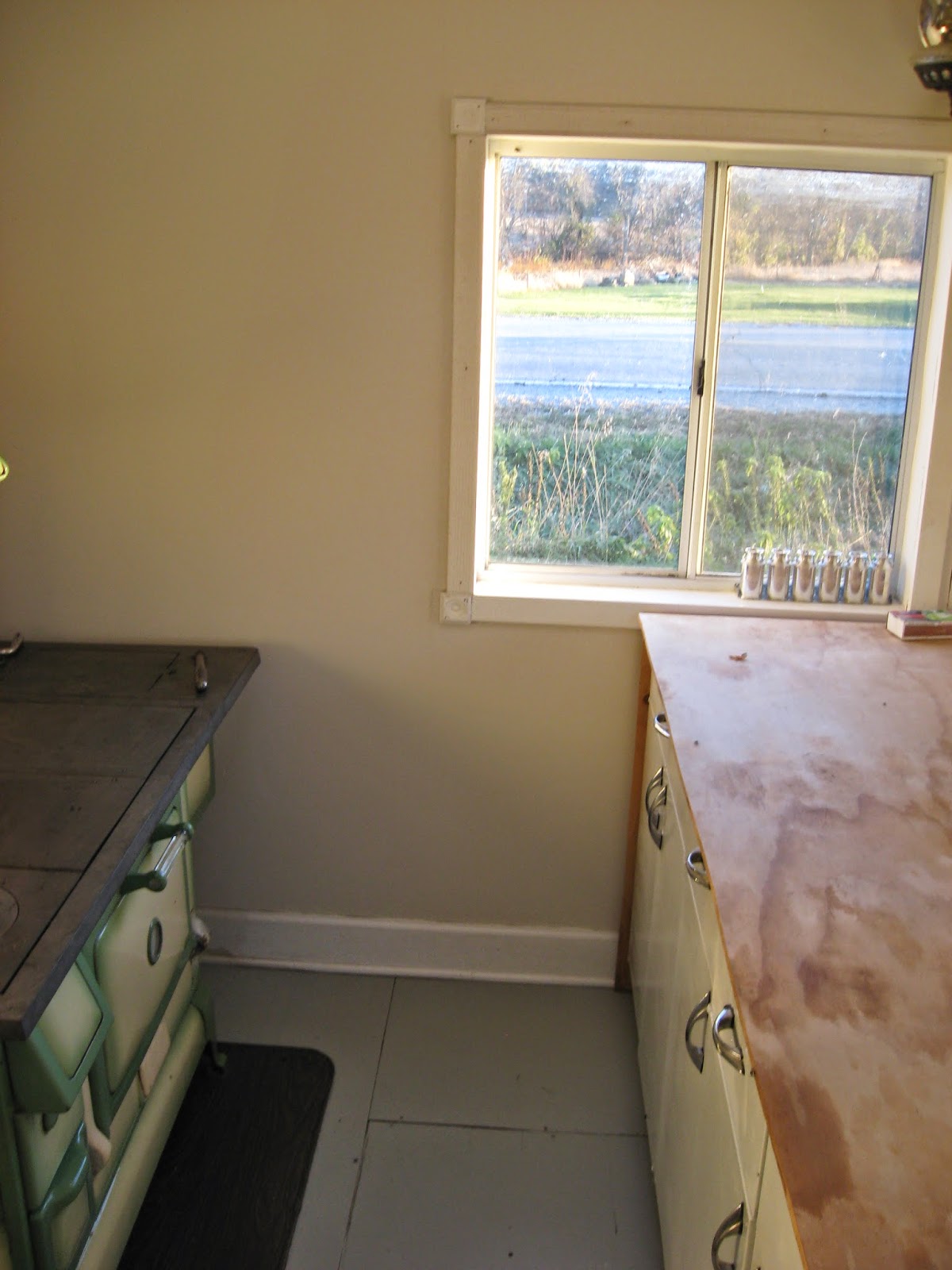 The next picture is taken from the same spot as the previous picture, but the view is turned toward the door.  We hung peg board and shelving in this corner because this was where we originally displayed our baked goods, cards, and needlework that was for sale.  Now we use the shelves for storage. 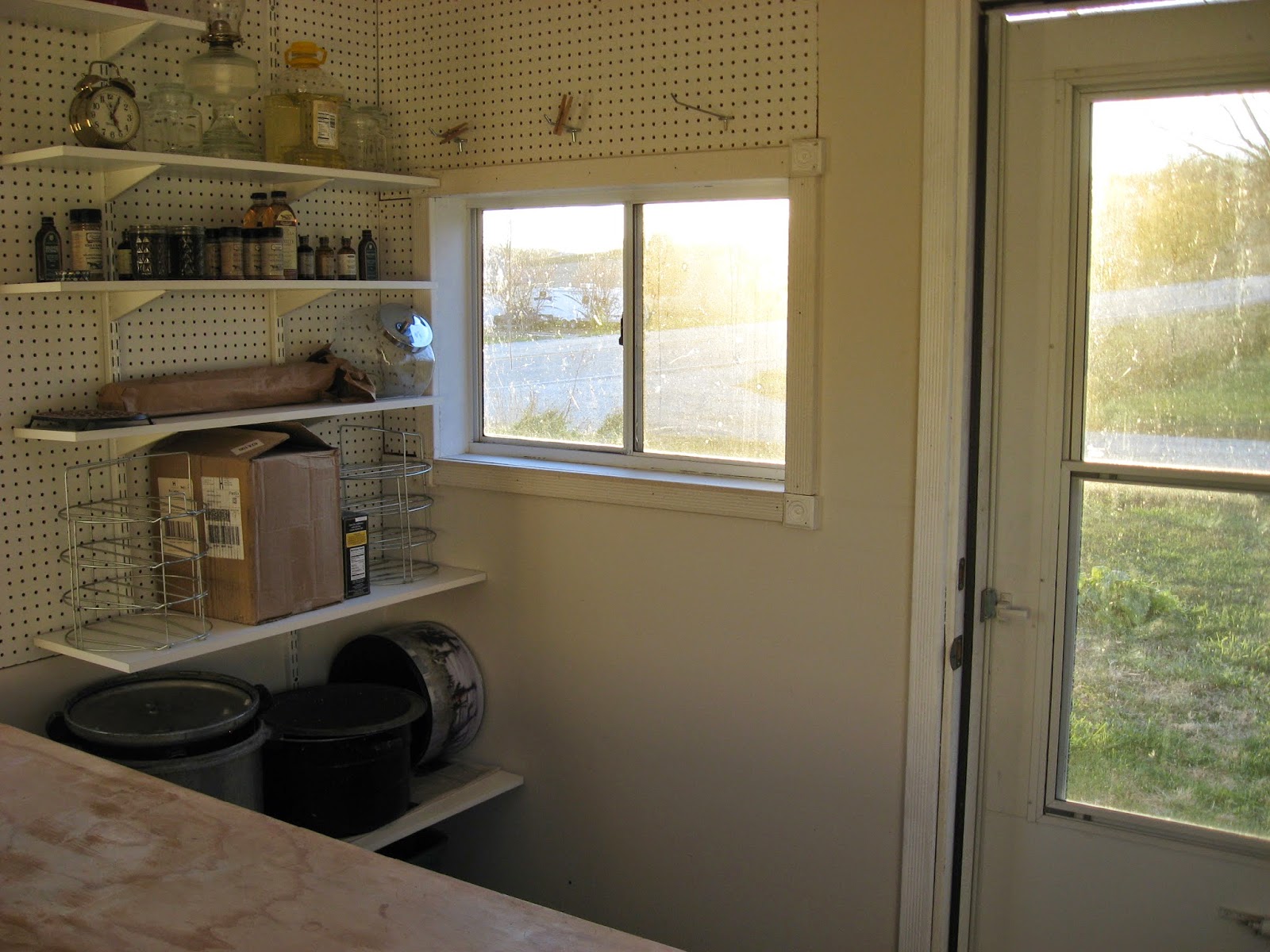 The view to the north while standing between the stove and the counter. 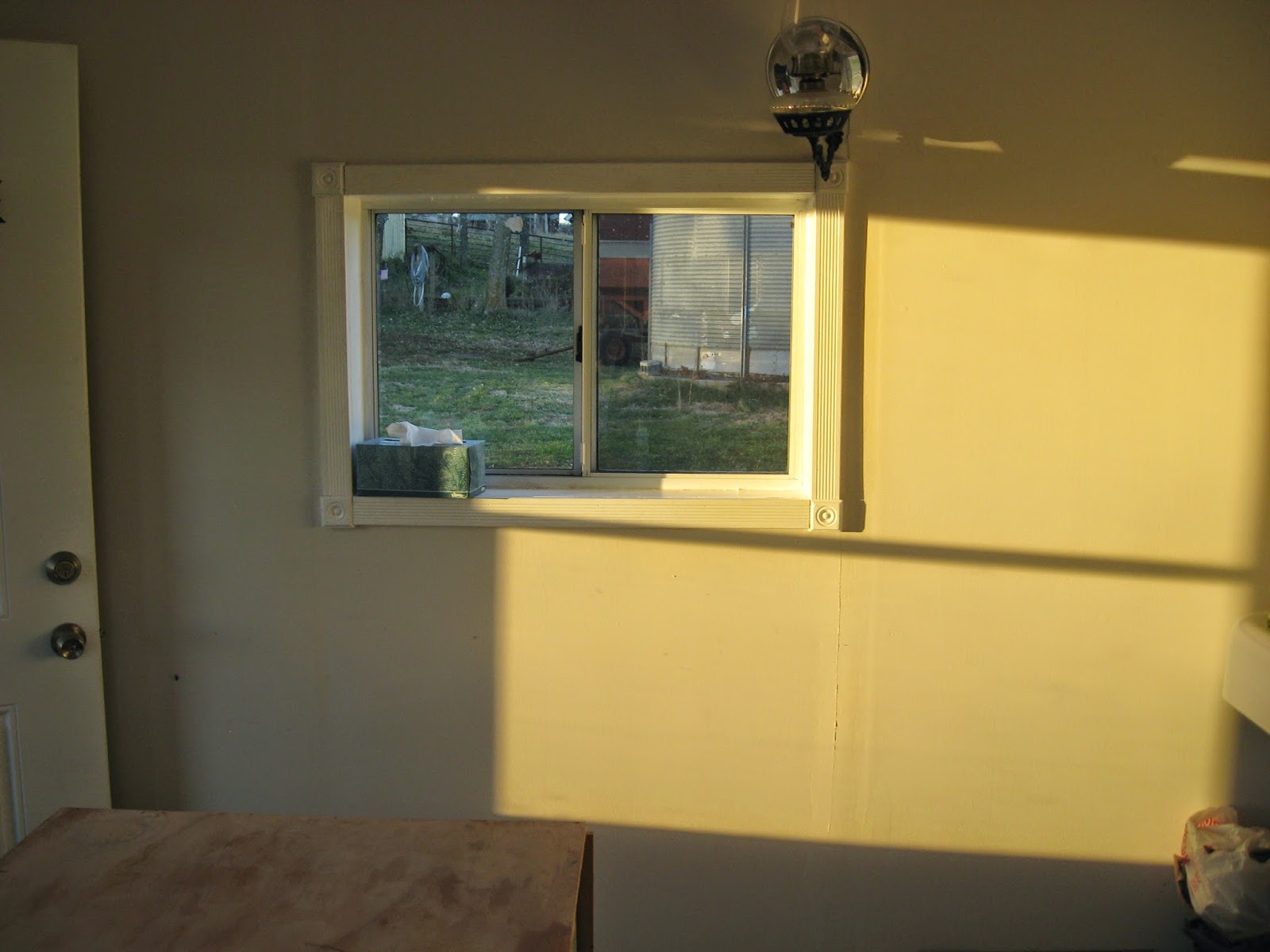 The summer kitchen is not equipped with electricity.  Again, we didn't want to have to go to all the trouble of permits and what have you.  Therefore, we did opt for the skylight, and this makes it so that the shed is a wonderfully bright place to work during the day.  At night, the oil lamps that you see in the pictures are employed.

Also note the register that you see at the peak of the ceiling.  We opted for one of these on both the east and west sides as well as the rotating roof vent that you can see in the second exterior picture above.  Our idea was to make it so that the heat could circulate out of the shed as easily as possible.  An unfortunate side effect of this arrangement is that with the poor chimney situation, the shed itself almost has as much draw as the chimney, so refueling the fire can sometimes be a smoky affair. 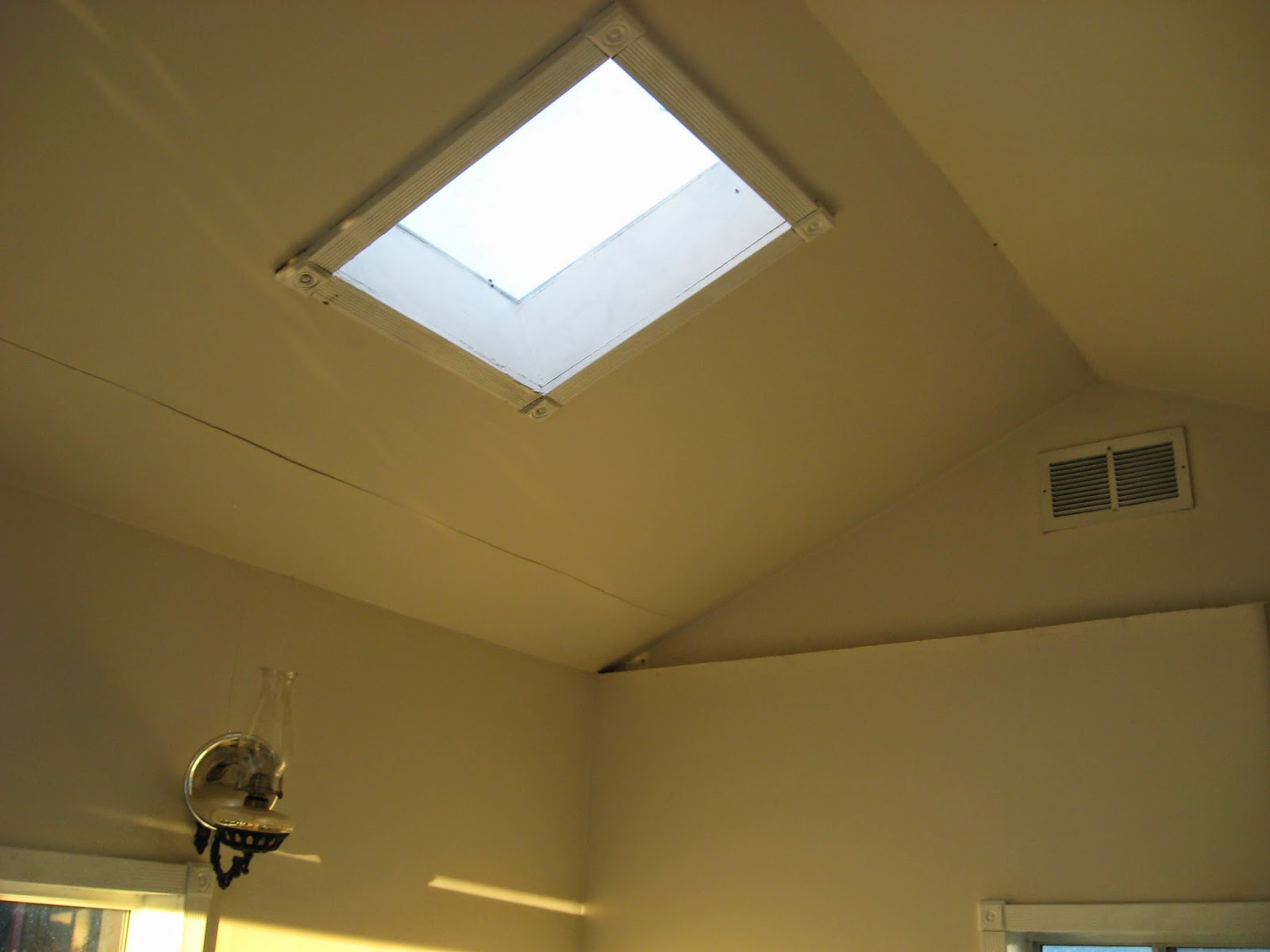 Besides the wonky chimney, one thing that I really want to change about the shed is the arrangement of the counter.  As it is, while you are working at the counter, your back is very close to the range.  In the winter, this doesn't feel too bad, but in the summer it is hot.  In reality, the whole shed can get quite hot in the summer.  We have a thermometer inside it, and its maximum temperature is 125 degrees Fahrenheit.  The thermometer has been completely red, and I suspicion that the temperature was actually closer to 140 degrees on the worst days.  That's plenty hot!﻿