One of the things I really enjoy about maintaining this blog is the opportunities to converse with other wood cookstove cooks.  One such cook is Nancy from west central Missouri.  I feel I have a special bond with her because her wood cookstove is a Qualified Range, the same make as the first cookstove that I purchased back in January of 1997.  The only differences are that hers is black instead of white, and her stove is equipped with a water reservoir.

I asked Nancy if she would be willing to have a Reader's Cookstove Post written about her Qualified, and she has generously agreed.  I sent her my standard questions, and her replies are below with nice pictures of her stove.

1. What was the reason you purchased this particular make and model of cookstove?

"I’ve wanted a wood cookstove ever since I first laid eyes on one many years ago. I’d always been interested in things that were old-fashioned and in time came to feel that it made sense to have one.

"We made many moves over the years, so I wasn’t able to pursue finding one. About ten years ago we moved to a place where we felt we would be staying for a while so I began thinking about one again. The house we lived in was small but we planned to build a summer kitchen and put it in there. Our budget was small, too, so I looked for a used one.

"One day, we were with some friends at an Amish general store. Our friends knew the owner and knew I’d been looking for one, so they suggested that I ask if he knew of a stove for sale. He said, yes, he had one in the storage shed behind his house. We took a look, asked the price, and said we’d get back to him. It was a Qualified range. They had purchased a new airtight stove to replace it. We went home and thought about it for a while and decided to go ahead and get it even though we didn’t have a place for it yet. It sat in our brooder house for a while until we moved to a different farm where the house had two chimneys with the opening going into one of them in the kitchen. We were finally able to set it up!"

I asked Nancy how long "a while" was that the stove sat in the brooder house.  She said that they had the stove for two years, and then they moved to their present home where the stove sat in the kitchen for another couple of years before they were able to complete their installation.  God has blessed Nancy with amazing patience!

2. Nancy's favorite feature of her range is its spacious cooktop with four lids and a blank plate.  I would have to agree with her there.  The cooktops on Qualified Ranges have more depth than many other models, so they accommodate large pots and pans easily.

3. When asked what she might change about her stove, Nancy mentioned the oven size.

"Even though the oven is good-sized, when I first saw it, it appeared small. I was used to large conventional ovens [like in a modern 30-inch range]. When I thought about it, I realized that it would be a rare occasion when the space in a conventional oven would be filled up. (Like when our home-raised turkeys dress out at 36 lbs.😀) Its usually just more area to have to heat."

Nancy's assessment of the oven situation is correct.  As the ovens on more recent models of wood cookstoves go, the Qualified's oven is not small.  Before purchasing mine, I measured all of my largest baking pans and roasters, and everything I had would fit.  When considering a wood cookstove, it is also important to remember that much of the size of a modern oven is in its height.  This is actually the least important dimension; width and depth are what really make an oven have more usable space.

4. How much of your home heating does your wood cookstove do?

"Other than when the power has gone out, we have only supplemented our forced-air heat with it. (How great it was when the power was out!) Because of our floor plan we are unable to heat the whole house with it. It does heat the large kitchen area very well, and we so appreciate the good warmth it gives when we come in from doing chores. It really warms you in a way that other heat just can’t." 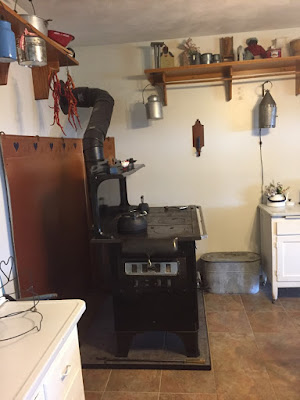 Nancy went on to say the following:

"Not knowing a lot about the different stoves, and nothing about Qualifieds, I wasn’t sure what we had. It seems to be a well-made stove and I’ve read favorable comments about them. While I always envisioned a more ornate old-fashioned looking stove, my husband really likes the looks of it."

I second Nancy's comment about the workmanship on the Qualified ranges.  Mine was purchased from Lehman Hardware via mail order in 1997.  I had not had a chance to look at any new cookstoves in person before it arrived.  In the fall of 2000, I took a short vacation to visit Lehman Hardware in person and spent hours in the stove department very thoroughly examining all of the ranges that I had only read about, and the more I saw, the more pleased I was with the Qualified at home.

I hope Nancy and her husband get to enjoy their Qualified range for many years to come and that she will feel free to comment frequently on this blog.  She finished her e-mail with the words below, which echo the sentiments of so many wood cookstove users!

"It has been a big blessing for us and a long-time dream come true. Wood cook stoves really are the 'Queens of the Kitchen.'"

A Single Sentence about Cookstoves

Today I am substituting as the media specialist at the school where I used to teach full-time.  I truly enjoy substituting for the media specialist, but my love of books is a complete handicap to any speed I might develop when it comes to managing circulation.  One of the students asked me how my day was going this afternoon, and I had to honestly admit that I'm kind of exhausted because I'm trying to read as many books as possible.  Today I may have actually mastered the art of speed reading/skimming a novel--a talent I have developed about 25 years too late for it to be as useful as it would have been when I was in college.

Then while I was dusting shelves in the high school library, I ran across the 1970 history book which was written to honor Shelby, Iowa's centennial.  I student-taught in Shelby over twenty years ago, and I have always enjoyed the town, so I pulled the book off the shelf and thumbed through it.

Smack in the middle of the book, I ran across a picture of a lady standing at a woodburning cookstove.  I think it is a stock picture that I've seen before, but the text that goes with it is fun.  It is entitled "LONGEST SENTENCE IN THE BOOK."  And I quote:

"The old cook stove was the most versatile of all household possessions, for it cooked our food; baked our bread; heated water for washing, butchering, dishes, family baths and general cleaning; heated our flat irons; rendered our lard; made our soap; canned our meat, fruit and vegetables; made jams and jellies in season; heated the kitchen; dried the clothes; warmed up new born pigs; dried off baby chickens caught in the rain; warmed a chilled foot or two; popped our corn; made our candy; kept the teakettle boiling to humidify the house; burned our trash and utilized cobs and wood raised on the farm." 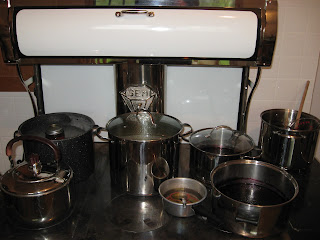 Will Somebody Please Explain This One?

All right.  First, let me just remind you that I spend WAY TOO MUCH TIME trolling about on Craigslist and eBay keeping track of the wood and coal cookstoves that are for sale.  Truly, I'm kind of embarrassed by this habit, but I learn a lot this way, too.  Not only do I get to see some really interesting vintage ranges, but I also am fascinated by the occasional glimpse at the way other people have incorporated a woodburning cookstove into their kitchen design.

However, I ran across something this week that has me scratching my head.  You all saw the picture of the Hayes-Custer stove that I acquired a few weeks ago:

Now check out this stove near Iron River, Wisconsin, near Eau Claire, that I found at this link:

The text with the ad says that this is a Marshall-Wells stove, but you can clearly see that the design is exactly the same as the Hayes-Custer.  This one is equipped with the warming oven, and instead of a large blank plate to the right of the firebox, this cooktop has four additional lids, but these were usually features that buyers could opt for if they wished to spend a little more money.

So what happened here?

At the Rochelle Gridley website entitled "100 Years Ago in the Pantagraph," where I found some of my information for my last post, the following sentence appears:

"After the 1929 fire the Association of Commerce gave some aid to help the company get on its feet again, but in 1936 the Hayes Custer Company accepted a contract with a mail order company that turned out to be a very bad deal for Hayes Custer and the contract was abrogated by a court, ending the company's operations outside the bankruptcy court."

Was Marshall-Wells that mail order company?

Can anyone clear this up for me?  I'm really curious now.
Posted by Jim at 1:20 PM No comments: