It's been a quite a while since I've posted a book review on this blog, but I recently read a cookbook that has been in my collection for perhaps a couple of years: A Prepper's Cookbook: Twenty Years of Cooking in the Woods by Deborah D. Moore.  I don't remember where I found this little gem, but it is available from retailers online.  Originally, I purchased this because the advertisement I saw said that it contained information on how to cook on a woodburning cookstove.  It does indeed.

Situated in Michigan's Upper Peninsula, Ms. Moore's home is remote, and she has to be ready to be snowed in for days at a time.  Thus, she keeps a very well-stocked pantry that is a combination of home-preserved and store-bought foods.  Ms. Moore has also cooked on her Enterprise King wood cookstove for more than twenty years, so she definitely qualifies as an expert on prepper cooking.  For me, though, the best thing about this cookbook is that it is a modern collection of recipes that have all been regularly prepared on a woodburning range. 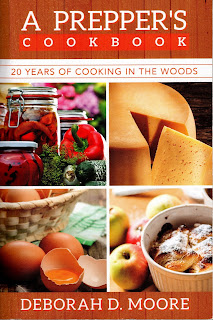 Ms. Moore has included a very wide variety of recipes in her cookbook.  With Harvest Chowder on page 19 and Pecan Chicken on page 165, she's got literally everything from soup to nuts.  The recipes vary greatly in their difficulty levels too: some are a lot of work; others are simple, but all are made with ingredients that could easily be a part of any well-stocked pantry and freezer.

Before each section of the cookbook, Ms. Moore has placed brief essays on many different subjects.  This is where she includes five pages of information about cooking on a woodburning cookstove.  In such a short space, Ms. Moore does an excellent job of giving the basics.  The only thing she says that I would disagree with is that she advises cleaning all of the ashes off the top of the oven box.  I'm sure that on her stove that gives her the best baking results.  However, in both the Qualified Range and the Margin Gem, I have found that leaving at least a half inch of ash on top of the oven box is beneficial.  See, in these models of cookstove, the oven basically heats from the top down, so to create the most even heating, it is important to keep the flue on the bottom of the oven clean, but a layer of insulation on the top is good.  Other than that, Ms. Moore and I are largely in agreement about these wondrous appliances.

On a side note, I read a negative review of this cookbook online from a reader who said she was disappointed because the information about cooking on a woodburning range was so short.  I wish I could get a hold of her and direct her to my blog!

My only negative criticisms are that there was some kind of a printing error on one of the recipes, making it obviously incomplete.  I also did not enjoy some of the essays at the beginning of the different sections of the cookbook.  These are generally small, though, so they aren't a big problem for me.

When I read this book in the late summer, one of the recipes that really caught my eye was the one for "Canned Cole Slaw."  I did not grow any cabbage in my garden this summer, but I had everything else the recipe called for, and the idea of having cole slaw in a jar was intriguing.  I tried it, following the recipe to the letter. 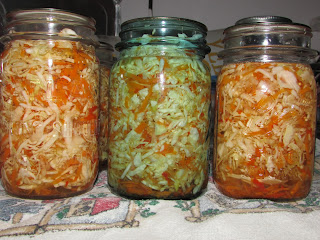 On Sunday, October 18th, I opened a pint of it to see what it tastes like.  Following Ms. Moore's advice, I rinsed the slaw twice.  This allowed much of the sugar, vinegar, and celery seed to come off.  I then mixed some sugar and a little pepper into some mayonnaise and folded that into the slaw.  The end product was good, if a bit krauty, but even Ms. Moore says in her narrative that the recipe is not meant to be a substitute for fresh cole slaw, rather a close second during the long winter months when fresh produce is harder to come by.

I'm looking forward to trying other recipes from this cookbook in the future.

Well, Marjorie the Margin Gem's complete Thanksgiving meal count is now officially two.  Last year, I blogged about the first entire Thanksgiving meal that was cooked on her.  This year, because of Covid-19 gathering size restrictions, Nancy and I elected to celebrate Thanksgiving at home.  Nancy's parents had elected to do the same, and since we were going to cook a full dinner anyway, we called them when the meal was ready.  We plated enough for them and slid it all into the back of their van so they could take it home to eat.  Thus, we cooked Thanksgiving dinner for only four people so we didn't have to use the stovetop oven like last year.  Though you can't see all four dishes in the oven, here is a shot of the cookstove with all of the food ready:

The recipe that I want to share today is for my great-grandma Ruth's escalloped corn.  This is a very simple and economical old-fashioned dish that has been a staple on my family's dinner tables since my grandfather was a boy.  I'm sure my great-grandmother originally made this in her woodburning cookstove, and it cooks beautifully in mine every time, too.  What's also nice is that it seems to bake equally well on the floor of the oven or up on the middle rack, making it particularly easy to cook with other things in the oven at the same time.

For a single batch, start by beating two eggs. 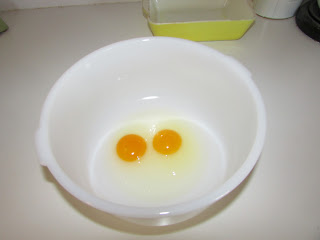 To the eggs, add 2 Tablespoons of sugar, a 1/2 teaspoon of salt, and a dash of pepper. 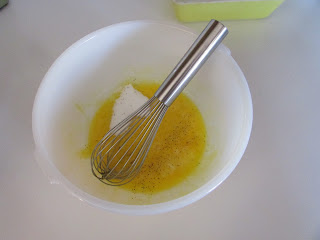 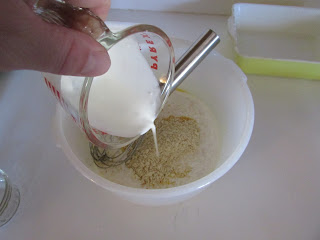 Lastly, add one can of cream style corn.  Mix well and pour into a greased casserole dish. 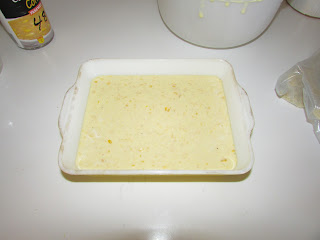 Bake in a moderate oven for 30 - 45 minutes.  During the last ten minutes of baking, sprinkle buttered cracker crumbs over the top. 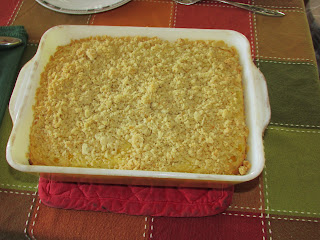 A century and a half ago, it was not uncommon for residents of America's Great Plains to use cow or buffalo dung as fuel in their cookstoves.  Trees were limited on the prairie, and often wood would have to be hauled from quite a distance to the kitchen range.  Thus, corncobs, "cats" of twisted grass, sunflower stalks, and animal dung became familiar fuels to our pioneer ancestors.

We don't have any shortage of wood on our farm, and we don't have a shortage of cow chips either.  For the sake of this blog and for the learning experience, I collected some cow chips late in the summer and burned them in the Margin Gem.  Below are several photographs of the cow chips during combustion along with some of my general observations about their performance.

Cow Chip Selection
Just as one might evaluate different pieces of firewood for their heating potential, one will want to be selective about which cow chips are chosen for the stove.  I don't want to be too indelicate, but...well...not all cow chips are created equal.  The best chips for fuel purposes will come from cows which have had plenty of dry roughage in their diets.  This creates the driest, most fibrous chip which will remain cohesive during handling and will provide the most heat potential too.  The buffalo chips on the prairie were such good fuel because the bison would have only had prairie grass and other fibrous vegetation to eat.  The more grain in the bovine diet, the poorer quality fuel the chips will be.

The quality of cow chips is also seasonal.  Pasture grass in the spring and early summer tends to be richer in moisture and other nutrients, causing cattle's bowels to be pretty loose.  The nature of cattle's output during this time makes finding anything that resembles a "chip" pretty difficult.  Later in the season, as the rains slack off and both the grass and the weather tend to be drier, what the bovine produces is more likely to be deposited in the "cow pie" form and is thus more easily collected.

Once the cow chip has been manufactured, the weather will be what determines when it can actually be used for fuel because sufficient time and sunshine must elapse in order for the dung to become firm enough to be handled and dry enough to burn.  Basically, when you pick up the chip, you don't want to see any evidence of moisture in it.  Because it was so much dryer than normal around here in late August and the very earliest part of September, that is when I collected the fuel that you see burning in the pictures.
One must also keep in mind that a cow chip can be quite dry on the top, but very moist on the bottom side.  Therefore, to make the chips burnable, they may need to be inverted in good, warm sunshine for a while.

To use cow chips for fuel, one must first start the fire using kindling wood or corncobs in the normal fashion.  Once the fire is burning well enough that it would be ready for split pieces of wood, one can add the dry cow chips.  The drafts should be open so that plenty of oxygen is available to aid in the ignition of the fuel.  Once the first chips are burning, add additional chips as frequently as you would if you were burning lightweight firewood such as poplar or cottonwood, leaving the drafts and stovepipe damper open enough to keep the flue gases exiting the house at a pretty good clip.  Trust me when I say that no one wants this kind of smoke escaping into the house.

As the cow chips burn, they put out a good, hot heat.  They also will form relatively short-lived coals that are similar to those of lightweight wood or corncobs, but they are coals nonetheless. 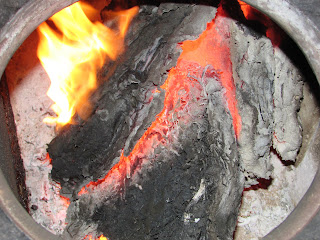 Additional Considerations
Despite the availability of cow chips, I'm going to stick with wood as my primary cooking fuel.  I find the smoke from burning cow chips has a disagreeable odor, and they are more susceptible to taking on moisture than wood, too.  Furthermore, it would take an awful lot of cow chips to create the same amount of heat that a pickup load of wood would yield.
That said, the most important takeaway here is that--unlike an electric or gas range which can only utilize one type of energy source--a wood cookstove has quite a range of fuel versatility.
If you have any personal experience or historic stories about cooking and heating with cow chips as fuel, please share in the comments!
Posted by Jim at 7:22 PM 4 comments: