I am not dead.

I can understand why my faithful readers may have thought so over the few months since there has been radio silence from me on this blog since July.  To sum up the events which have happened since then, we hosted a family reunion in early August (such a privilege to be able to do that), I returned to full-time teaching later that month (nobody's more surprised than I am), both Nancy and I contracted Covid-19 (despite being vaccinated), and I feel like I've been chasing my tail ever since.

As a matter of record keeping, we didn't start daily firing of the wood cook stove until the latter half of October of this year.  We'd had a few fires here and there as temperatures in the house and our cooking needs dictated, but it wasn't until the weather became regularly chilly that we made the commitment to shutting off the electric water heater and having a wood fire every day.  That was a full month and a half later than it was in 2020.

From then until a couple of days ago, Marjorie the Margin Gem was embarrassingly filthy, and she would not have stood to have her picture taken for blogging.  She finally got her long-overdue bath last Tuesday and with the exception of the interior of her oven, she is ready to pose for the camera once more.

With the extremely busy schedule we've been keeping, I haven't cooked anything very interesting or that hasn't already landed on this blog in some way or another.  We were invited to supper at my best-friend-since-second-grade's house last night, though, and when I asked what we could bring, "Dessert" was the answer.  Thus, I pulled out an ancient recipe that I haven't made for at least eighteen years because Nancy had never had it: Grandma Ruth's Gingerbread.

I think it is interesting how certain members of the family will always be known for the special foods they make.  My dad, for example, will be forever known as the creator of the "Super Duper" a microwaved sandwich whose genesis in the early 1980s went completely unnoticed in the culinary world, but whose presence on our supper plates during that decade was a fairly regular occurrence.  Mom was the family donut maker, and Granny's mashed potatoes were the smoothest and fluffiest (she credited them to her powerful arms which she swore were the result of milking cows for so many years).  Meme was known for her cinnamon rolls, her old-fashioned candies, and the endless flow of cookies that came from her oven.

My grandma Marian was probably the best all-around cook in my family, but she would always say that her mother-in-law, Grandma Ruth, was who taught her to cook.  Born in 1897, Grandma Ruth was the second of nine children in a prosperous farming family south of Council Bluffs, Iowa.  Her older sister Olive preferred to work outside in the barns or garden, so Grandma Ruth was employed in the kitchen with her mother and a hired girl named Olga.

With eleven members of the family, Olga, and at least two hired men, preparing all of the food for fourteen every day caused Grandma Ruth to become a good cook in short order.  I consider Grandma Ruth our family's first "foodie."  Once she had her own kitchen, my grandpa remembered her as a person who often tried new recipes.  However, she didn't like making food that she considered sub-par.  Grandpa specifically remembered her making a new recipe for some kind of fruity ice cream that he and his father just loved.  "But she didn't like it, and we never saw it again," Grandpa lamented.

Grandma Ruth was known for her cakes and pies.  One of the recipes that I associate with Grandma Ruth is gingerbread.  Her gingerbread is of the cake variety, not the cookie type.  In today's world, it seems like desserts run toward chocolate more often than anything with fruits being a close second, but in years past, spices were what cooks relied on to keep things interesting, and brown sugar and molasses were more affordable sweeteners than white sugar.  The age of this recipe is shown by its use of these ingredients along with its half cup of boiling water from the wood cookstove's ever-present teakettle.  In addition to the boiling water, here is what is needed to make this old-fashioned dessert: 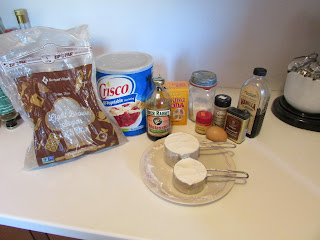 1/3 cup brown sugar
1/3 cup shortening
1 egg
1/3 cup molasses (I think mild flavored is best for this.)
3/4 teaspoon nutmeg
3/4 teaspoon cloves (I scant this)
1/4 teaspoon ginger
dash vanilla
3/4 teaspoon baking powder
3/4 teaspoon baking soda
1 1/2 cups sifted flour
Of course, as is so often the case with Grandma Ruth's recipes, the instructions for this recipe are sparse.  They simply say, "If mixing by hand, be sure to alternate flour and water."  I'll be a little more specific than that for all of you.
If baking this in a wood cookstove, build your fire such that you will have a moderate oven (350ºF).  Grease an 8" x 8" square cake pan.
1. Cream the brown sugar and shortening. 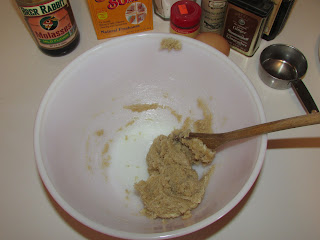 2. Add the egg and molasses and beat them in.
3. Add the nutmeg, cloves, ginger, and vanilla. 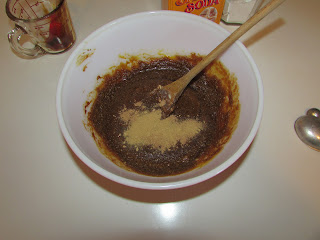 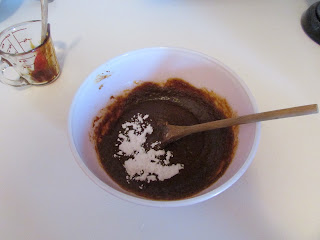 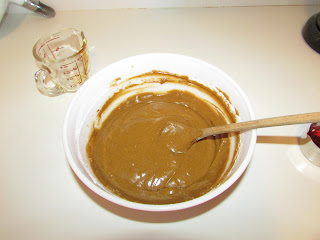 6. Pour the batter into your prepared pan and bake in a moderate oven until it tests done.  Mine took 23 minutes. 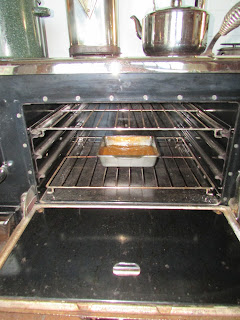 7. In my family, gingerbread is always served with sweetened whipped cream on top. 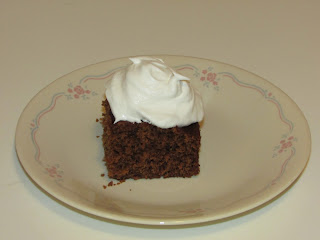 This recipe has what I would call "old world flavor."  The molasses and spices hearken back to a time when people's tastes in desserts were entirely different from what we are used to now, and with each forkful my imagination runs wild with what my great-great grandparents might have been thinking as they enjoyed this same recipe over a century ago.