This recipe is an old favorite in our area.  Our recipe card says that our family got it from Ruth Anne Huff, who is a really sweet lady and a retired school cook.  She lived between my aunt and uncle and my great-great-aunt and uncle while I was growing up.  I'm pretty sure, though, that the recipe is also the same one that the Hazel Dell Extension Club used to make as a fundraiser when they would provide the concessions for a local sale.  Either way, it is an oldie but a goodie.

Just a fair warning up front: I wouldn't recommend trying this alone.  I've never made them by myself, and I have no desire to.  When you get to the point where you are cutting out the donuts, frying them, and glazing them, an extra pair of hands or two is most welcome.

Special note for my fellow wood cookstove cooks: Have PLENTY of smaller sticks and split pieces of wood ready.  In both of the wood cookstoves that I have fried donuts on, it takes a LOT of fuel to keep the oil hot enough to fry all of these properly!

Other food ingredients:
Oil or other fat for frying (I'd plan on a half gallon.)
sugar for rolling--OR--powdered sugar, vanilla, and a little butter for glazing

Our recipe did not come with directions, but here is what we do:

1. Scald the milk.  I do this in a heavy bottomed saucepan directly over the firebox.  You know it is scalded when tiny bubbles form around the edge of the pan or a scum forms across the top.  Remove from the fire. 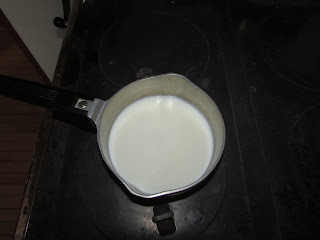 2. While the milk is on the stove, dissolve the yeast in the 1/2 cup of warm water in your largest mixing bowl.  Don't mess around with any little bowl here; I'm not even sure that a half batch would fit in a standard mixer bowl.

3. Usually, I use leftover mashed potatoes that have been refrigerated. Since I don't want the cold potatoes to lower the temperature of the dough and thereby make the rising process longer, I like to put the cold mashed potatoes into the hot milk.  This cools the milk quickly and speeds the whole process along.  If the butter is cold, I put it in the milk too.  Leave this aside for a moment.

4. Sprinkle the 1/2 cup sugar over the yeast and water mixture.

5. Add the salt and stir a little.

6. Stir the milk, potatoes, butter, and beaten eggs into the yeast mixture. Be careful to get any large lumps of potatoes out now because it will be difficult later. 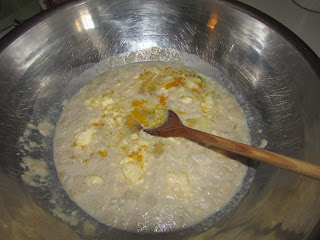 7. Begin stirring in flour.  You are shooting for a dough that is still a little sticky.  It should be less sticky than cinnamon roll dough, but more sticky than bread dough. 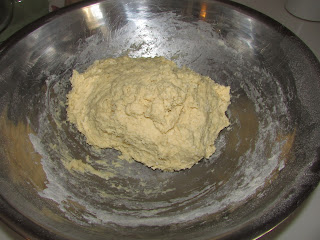 8. Cover and let rise until double in bulk. 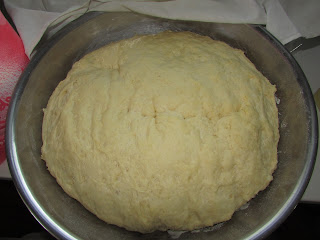 While the dough is rising the first time, you need to do the following:

a) Prepare a place to roll out and cut the dough.

b) Have at least four of your largest cookie sheets or jelly roll pans ready to hold the rising donuts.

c) Put paper towels on two or three of your largest dinner plates because this is where you'll drain the donuts after frying them.

d) Prepare a place for the donuts to drain once they are glazed, or to continue cooling once they are sugared.  We use our broiler pan for the initial drainage spot and then transfer to a cooling rack that has been placed in yet another of our largest jelly roll pans.  This way, we can easily scrape up any glaze that drips off and recycle it in the glazing bowl.  I've seen pictures of Amish people sliding the donuts onto the handles of wooden spoons to drain, but you'd have to have a whole lot of wooden spoons for this recipe, and it won't work for the holes.

e) Prepare your dipping sugar or your glaze.  We always glaze because I think frosting of any kind makes the world go 'round.  We mix a couple of tablespoons of butter, some vanilla, water, and powdered sugar together to make our glaze.  For a single batch of donuts, you'll need at least two pounds of powdered sugar if you glaze them. 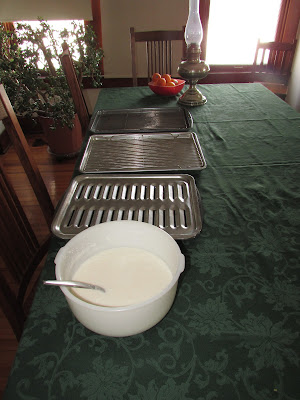 When the dough has risen sufficiently, punch it all down and roll out a fifth to a quarter of it at a time.  Roll it out to no thinner than a half inch.  Cut donuts out.  We have several donut cutters, most of which have removable center pieces that cut the donut holes.  I find that the most effective cutting method is to press down and then twist the cutter.  I know the twist is forbidden in biscuit cutting because it makes a lop-sided biscuit, but I have noticed no such effect on donuts.  Place each donut on a cookie sheet to rise again, leaving space between them for this to happen. 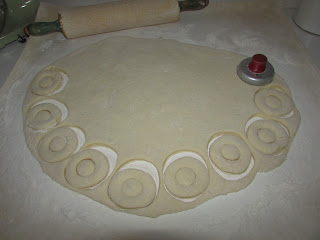 Because we like donut holes better than the regular donuts, I remove the center part of the donut cutter and cut holes out of any of the leftover spaces in the dough.  Once everything that was usable has been cut, knead the scraps together and add them to another hunk of dough to be re-rolled.

Here is where it gets tricky.  In my experience, the first donuts you have cut will be ready to be fried before you are finished rolling and cutting all of the dough.  Thus, while you are still cutting, you need to begin heating up your oil.  Mom used a Fry Daddy for donut making when I was little, but we have used cast-iron pans for the last many years.  My favorite pan to fry in is my cast-iron chicken fryer.  It is deeper than a regular frying pan, which helps reduce splatters--especially helpful on the wood cookstove. 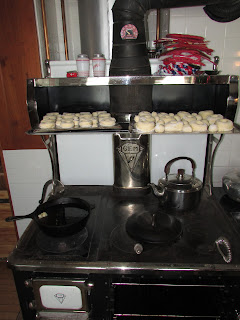 We use canola oil to fry the donuts.  Mom used to use white Crisco.  I would like to try frying them in lard someday, but I haven't been brave enough to do it yet.

For the wood cookstove, I like to remove the front lid over the firebox and put my pan directly over the flames.  On a gas or electric stove, medium-high heat is needed.  I never put a thermometer in the oil to know how hot it is.  Here is how I tell whether the oil is at the right temperature:

Fry the donuts a few at a time until they are nicely browned on either side. Only turn them once!  Turning them multiple times will make them greasier than they need to be.  Don't fill the surface of the oil completely full of donuts because they will rise a little more while they are frying, and they can become very difficult and a bit dangerous to turn if they are too crowded.  The donut holes may not allow you to turn them, or sometimes they will roll over themselves.  If they don't get fried on both sides, it will be all right.  They are small enough to get cooked through if only one side ever sits in the oil.  Truthfully, I think they are better that way. 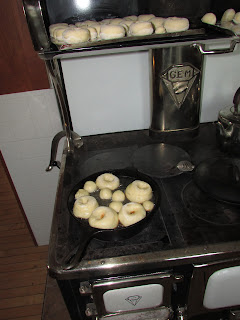 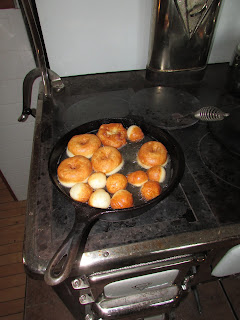 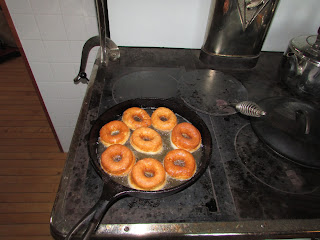 Remove from the hot oil to drain on the paper-towel-covered plates.  While they are still hot, roll in sugar or glaze.  Cool on the broiler pan or racks. 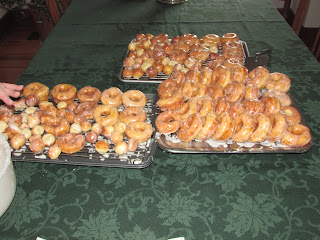 Hints:
Historical note: My great-great-aunt Meme told me that when they had threshers, they always made them donuts for their 3:00 lunch break.  This was after a humongous noon dinner, so you can imagine how much energy those men needed to do their work!

As with any recipe, I'm sure there are as many ways to make these as there are people who do it, but the above is what we've found works best for us.
Posted by Jim at 10:14 AM No comments: