I've been remiss in my blog posting over the last few months, and for that I apologize.  I should have actually written this post back in March when the pictures were snapped, but I guess that life got in the way.

The recipe that I'm going to share here is one that I "devised" back in late January or early February and is really much more of a cold weather, stick-to-your-ribs kind of dish than what I would be interested in making this time of year.  Maybe "devised" isn't quite the right word.  I got the idea for this dish from the dinner at my cousin's wedding a few years ago.  The catering company was not about to share their recipe, of course, so I looked at recipes for Asiago sauce online and studied them a little.  A couple weeks later I struck out on my own, and this was the result of my endeavor.  It was a hit with my family, and we ended up using it as the entree at our church's Valentine Dinner.

The pictures that you will see below are from when we did an encore meal with some good friends of ours and their twin daughters.  We served this meal with homemade noodles, so the first picture is of the noodle dough being mixed; however, I think rice or potatoes would be equally good starchy accompaniments. 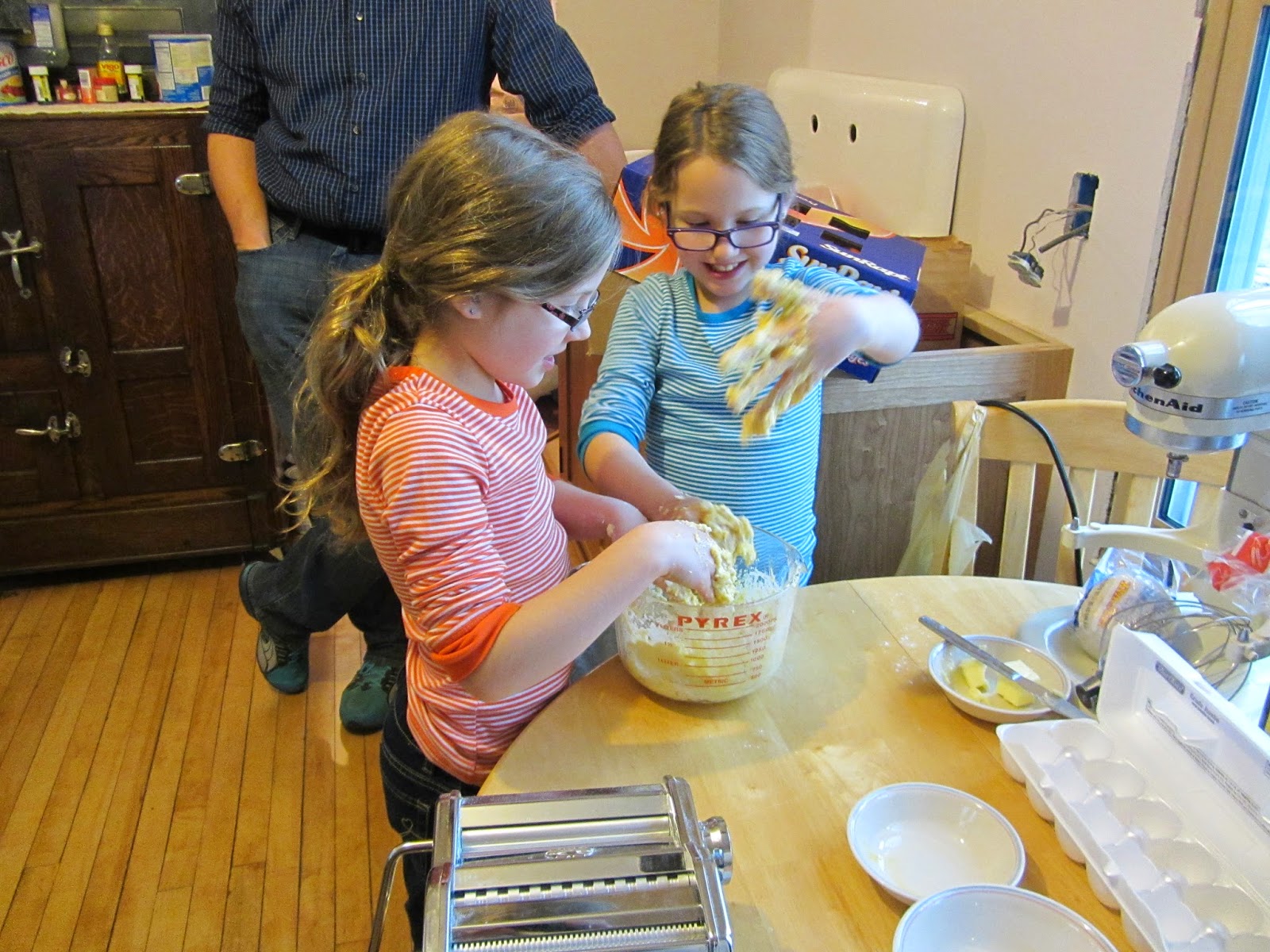 Step one for the actual Asiago Chicken is to pound out five or six chicken breasts (I think there's actually enough sauce for more like ten of them).

Once the chicken breasts are flattened, roll two slices of dried beef into a single cylinder (this is sold as "deli smoked beef" in our local Fareway store.  Don't get the stuff in the vacuum pack from the nationally known packing house; it tastes like dog food).  Then wrap the chicken breast around the dried beef cylinder.  Wrap two slices of bacon around the chicken/dried beef crosswise.  If necessary, you can secure the whole thing with a centrally located toothpick.


Pop the meat into a moderate oven for about an hour, or until the chicken is cooked thoroughly.

While the meat is in the oven, it is time to work on the Asiago sauce.  Melt 3 tablespoons of butter in a deep skillet.  I like to use our Magnalite chicken fryer because of its nice tall edges.  In the butter, brown seven minced cloves of garlic.  As you can see, this is done directly over the firebox.


Now, I am ordinarily not a person who cooks with wine.  I just have never really tasted wine that I liked.  However, I do pour perhaps a 1/4 cup of white wine into the garlic and butter in order to deglaze the pan.  This is best done directly over the fire in order to cook away as much of the alcohol as possible.

Add a splash of dried parsley for color and flavor, a dash of salt and pepper, and some garlic salt if you want.

Bring the mixture to a boil over the fire, stirring pretty much constantly.

Mix 1/4 cup of sifted all-purpose flour in a half cup of milk until smooth while you are waiting for the boil to be reached.

Once you've reached the boiling point, add the flour and milk mixture for thickening along with a generous tablespoon of sour cream.
Then add a 1/4 pound of grated Asiago cheese, stirring constantly until the cheese is completely melted and the sauce has thickened a little.

Once the sauce is cooked, put the whole pan on a trivet or simmering pad as far away from the fire as you can.  You just want the sauce to stay warm.


The young ladies in the first picture above had charge of the camera for awhile, and they caught a couple of cool pictures of the fire as I was stirring and refueling.  I thought their height created an angle into the firebox that I would not ordinarily have caught. 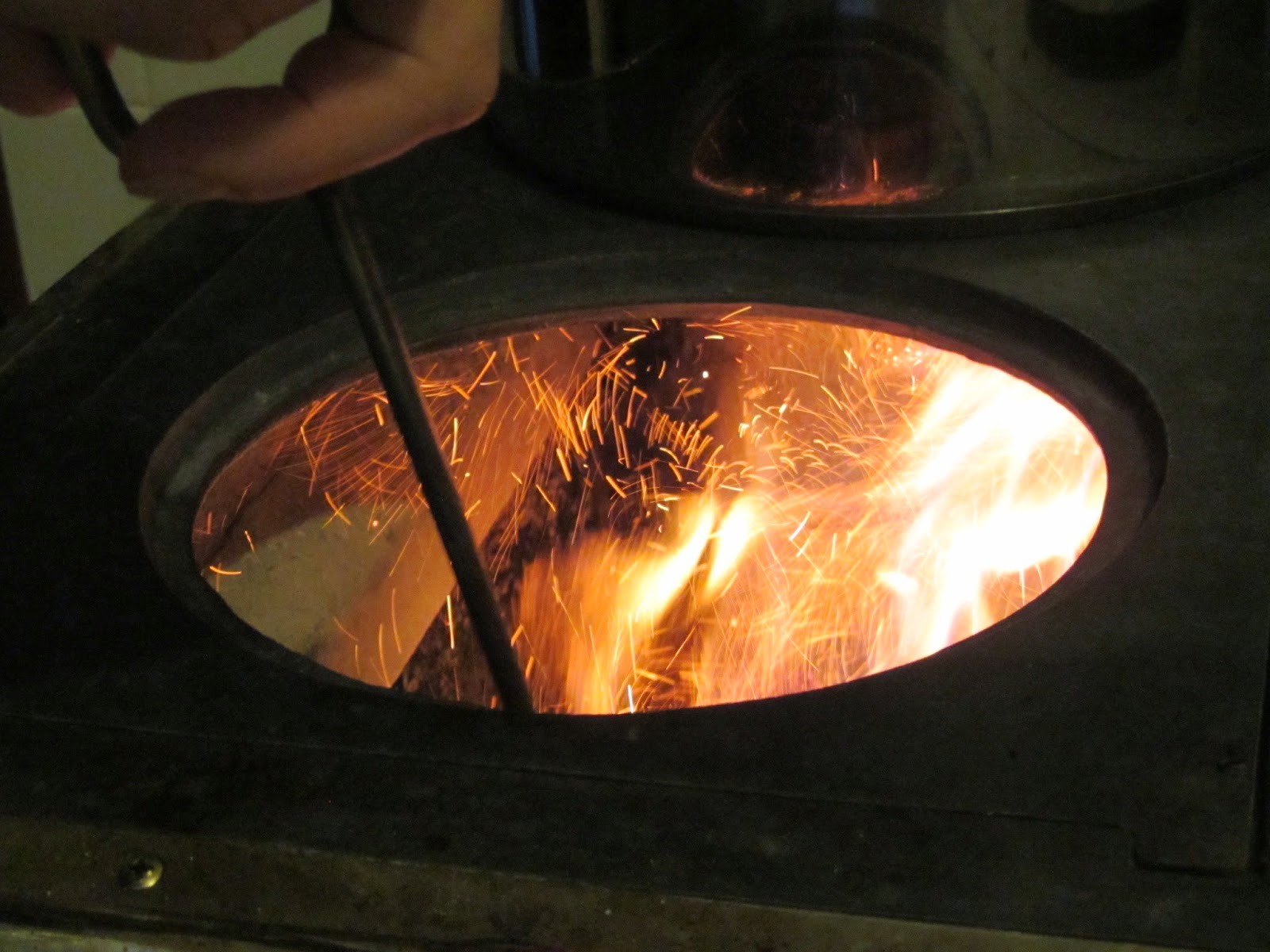 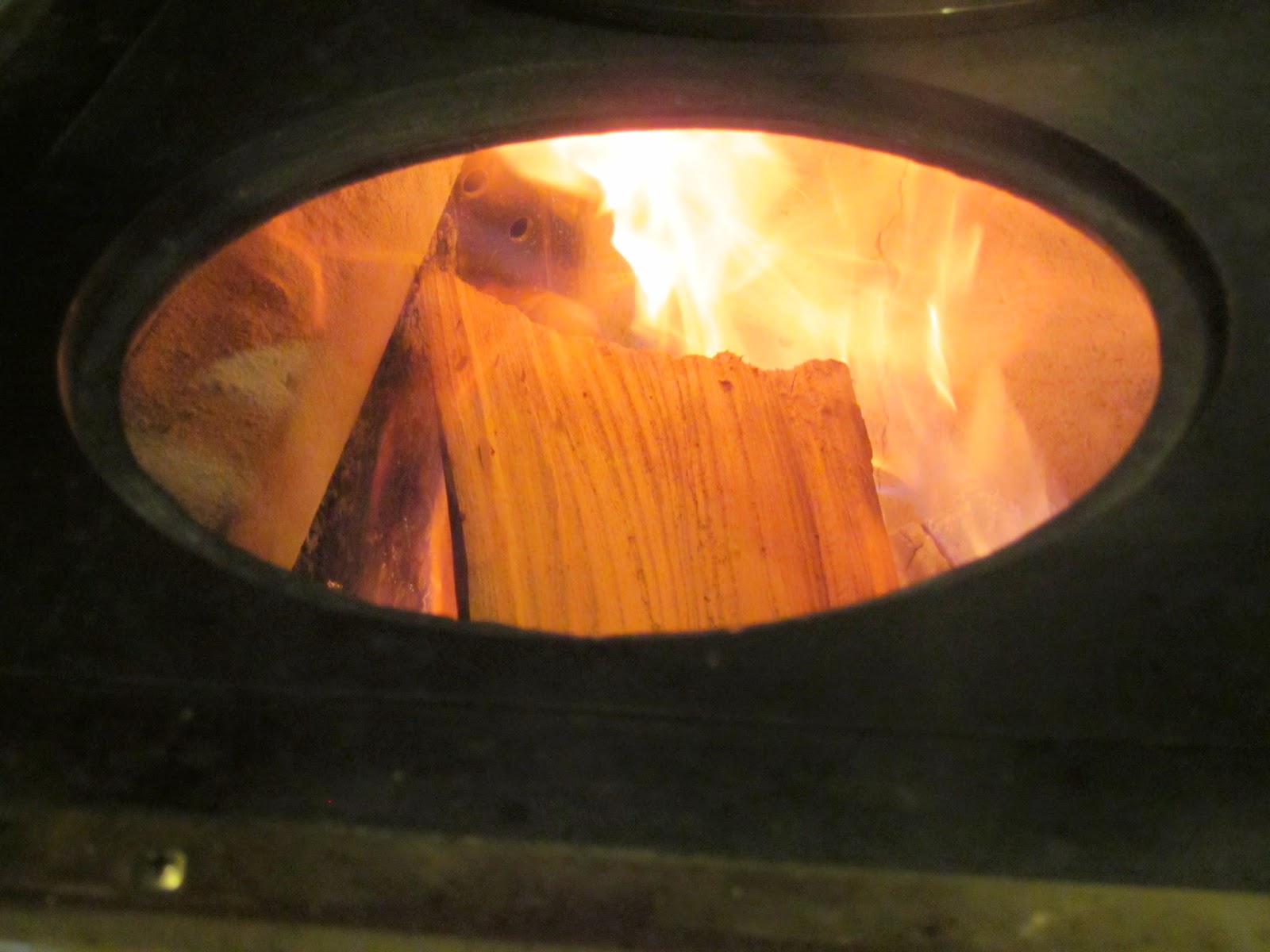 Remove the meat from the oven when it is thoroughly cooked (no pink in the chicken, juices running clear). 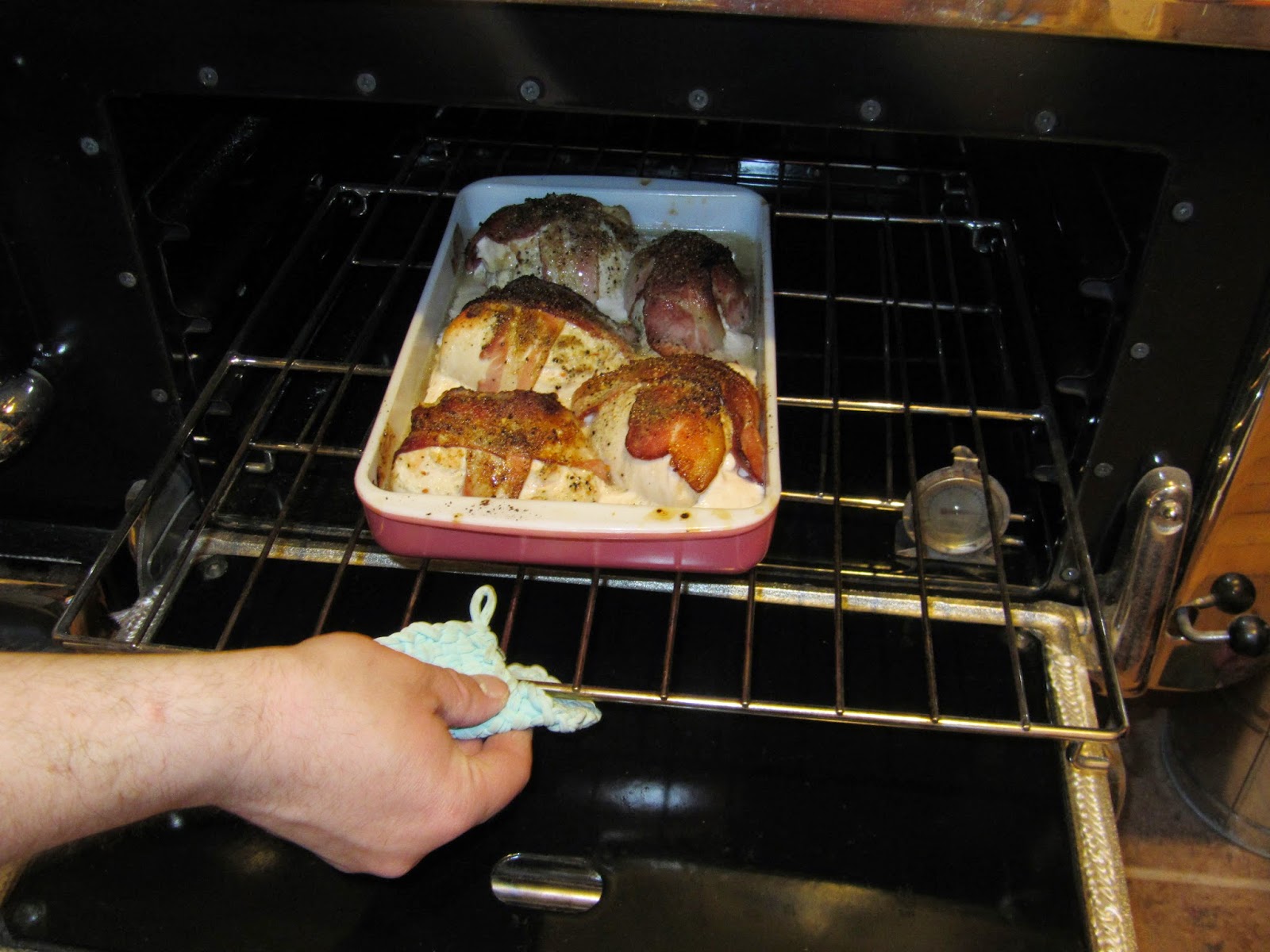 Pour the sauce over the chicken (and the pasta, potatoes, rice, or whatever else you want--people generally seem to want to put it on everything) and serve. 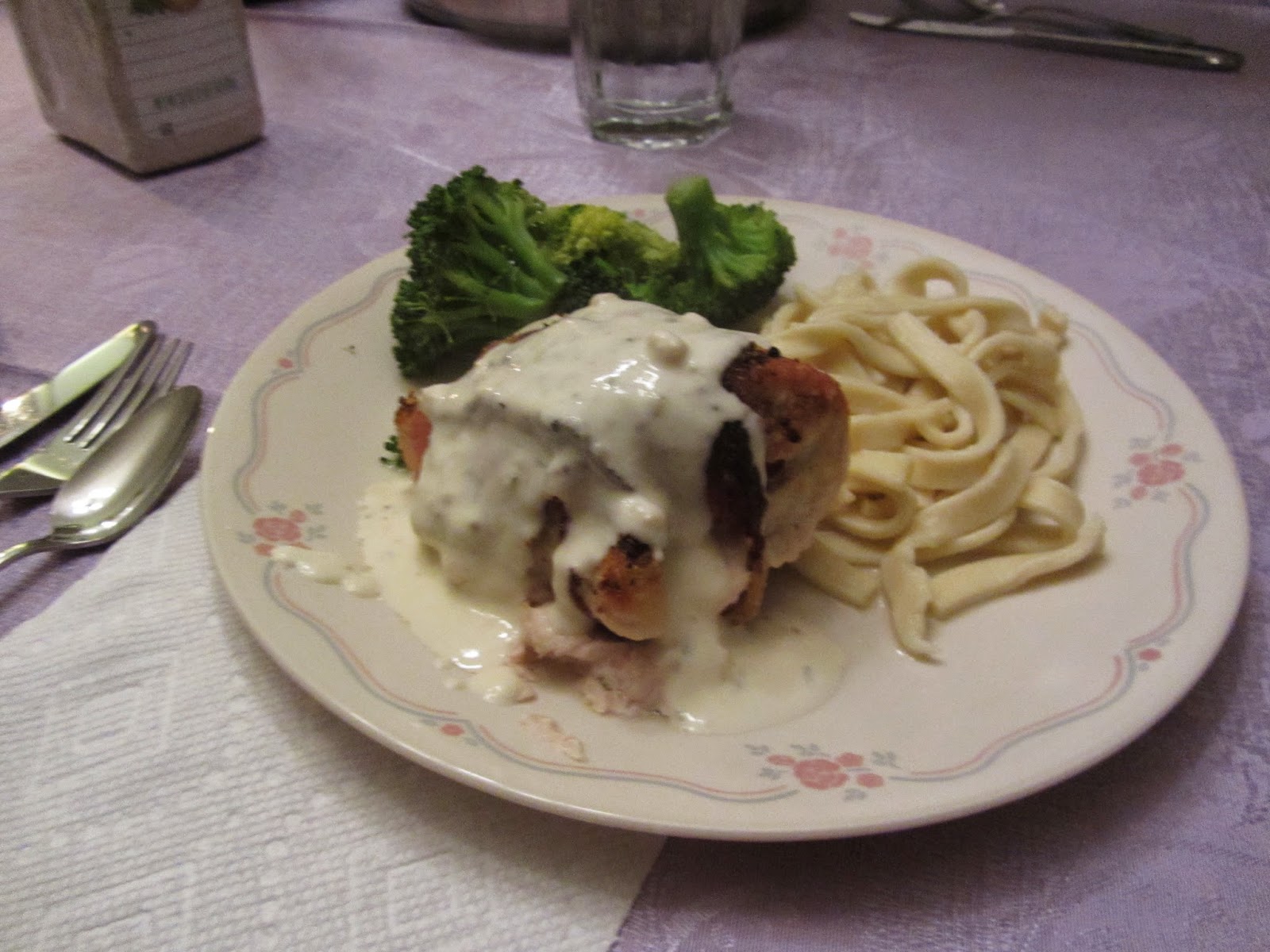 I hope you enjoy this as much as we do!

Here's the recipe in a little more accessible fashion:

1. In a tall skillet, saute garlic in butter over fire until brown.
2. Add the white wine to the garlic and butter mixture to deglaze the pan.
3. Add cream, parsley flakes, salt, and pepper.
4. Bring mixture to boil, stirring almost constantly.
5. Stir sifted flour into cold milk until smooth.
6. Once cream and garlic mixture boils, add flour and milk mixture and sour cream.
7. Add grated Asiago cheese.
8. Stir until thickened and cheese is completely incorporated.
9. Set aside on simmering pad or trivet away from fire until meat is cooked.
10.  Serve by pouring sauce over chicken wraps.


P.S.  I forgot to mention that one of those beautiful girls in the first photo--I don't know which--said this after observing the cooktop with the sauce, the noodles, the broccoli, the teakettle, and a pot of pancake syrup on it while we were cooking:

"I know why you like cooking on a wood stove: you have room to cook so many things at once!"