The following recipe is one I copied out of the Anita, Iowa, Centennial Cookbook.  This is a very old-fashioned recipe with a very old-fashioned flavor.  It is too warm for soup, and we have used all of our home-grown potatoes, so I made them the "artificial potatoes" way in the lower half of the recipe.

This is the way the recipe appeared in the cookbook:

Grandma (Mrs. Wilbur) Heckman's Dumplings
(Copied just as she wrote it to her granddaughter)
I used one egg and 1/2 cup of milk, a pinch of salt, about a cup of flour with one teaspoon baking powder, stir good, have your soup broth deep enough to an inch or more above other ingredients and boiling.  Now drop by teaspoonful but have your spoon dipped first in hot broth.  Place lid on for five minutes, or until they look done, or porous on top.  But, don't peek at them until 5 minutes are up.  When we were short of potatoes in the spring, I would feed the family by doubling the recipe, have several inches of salted water boiling and drop by tablespoons in water, let cook, then take those out onto a platter and drop more in.  I would have butter browning with bread crumbs and onions and cover each layer of dumplings with that.
Mighty good!  The boys (she had seven sons) called them artificial potatoes--easy and filling.
Vesta Bailey Duensing
Here is what the dumpling batter looks like when it is all mixed up.  I put perhaps an extra tablespoon of flour in them. 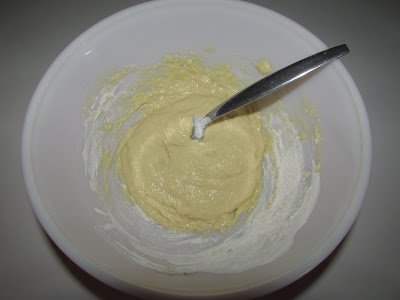 I browned onions and bread crumbs in butter just like she suggested.  If I make these again, I'm going to forego the bread crumbs. They were unnecessary and added kind of a sandy texture to the outside of the dumplings. 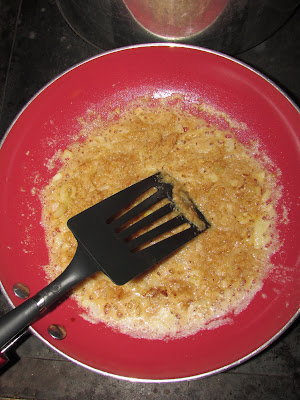 I couldn't take a photograph and spoon the dumplings into the boiling water, so you'll have to settle for a picture of what they looked like when I removed the lid after the five minutes of boiling time had elapsed. 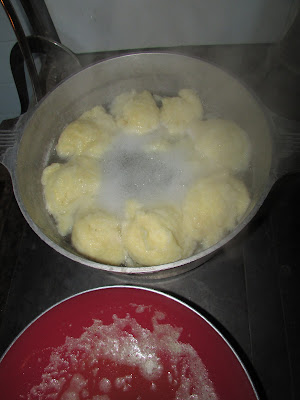 I scooped them into a frying pan of hot browned butter and then added the browned onions and bread crumbs.
The dumplings were faintly like boiled potatoes, and they certainly weren't bad.  I ate them with a lettuce and cabbage salad and hamburgers that I had canned last summer on the Hayes-Custer. 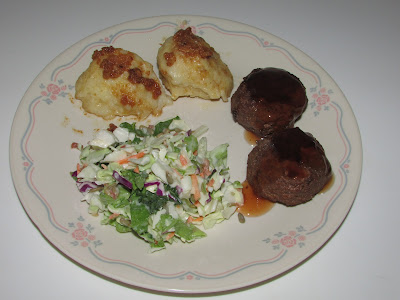 In these days of heightened awareness about carbohydrate consumption, I don't suppose these will enjoy renewed popularity.  However, back in the day when farming involved constant physical labor, you can see where these little balls of energy would be welcome on the noon dinner plate if the potato bin was empty.
Posted by Jim at 4:47 PM No comments:

I want to share another fun piece of cookstove media from my collection.  The scans below are from an oversized booklet showing the ranges which were being manufactured by the Majestic Manufacturing Company of St. Louis, Missouri, in the late 1910s.  Because of the size of the pages, I had a difficult time getting full-sized scans.

As with so much of the wood cookstove ephemera I have, no publishing date is present anywhere in the booklet.  Thus, we use various clues to arrive at an approximate date, and the first clues appear on the front cover. 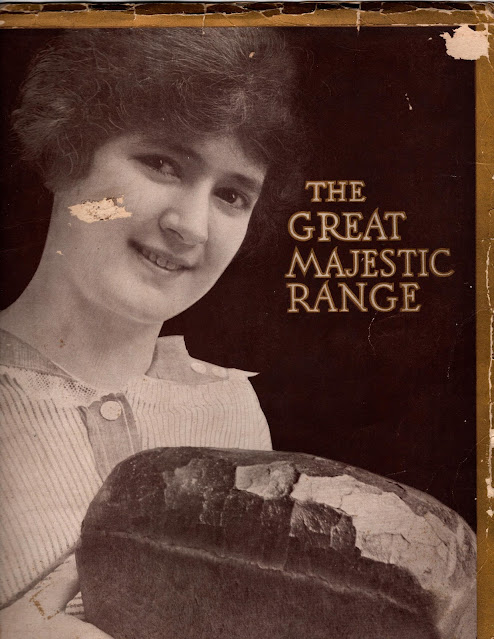 The woman's hairstyle in the photograph above screams 1915-1919.  The style of her blouse also is appropriate for that time period.
Our next clue comes from the inside cover, which states that the Great Majestic Range is "The Range with a Reputation" because it won a gold medal, the highest award given at the Panama-Pacific International Exposition in San Francisco, California.  More commonly known as the San Francisco World's Fair, this event opened on February 20, 1915, and did not close until December 4 of that same year.
Another indicator of the date is the fact that none of the stoves in the booklet have any porcelain enamel on them.  As I understand it, the capability of using porcelain enamel on stoves was developed right around the turn of the twentieth century, but it wasn't until the 1920s that it became widely popular. 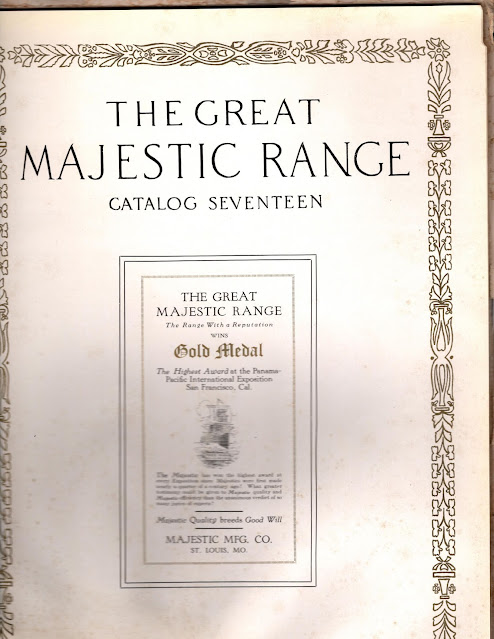 The Majestic Manufacturing Company, sometimes called the Majestic Stove Company, produced about two million ranges between the 1880s and the 1940s and was one of the ten largest stove producers in the United States prior to World War II.  Many of their ranges are still in use today, and they are very commonly found in stove restoration shops. 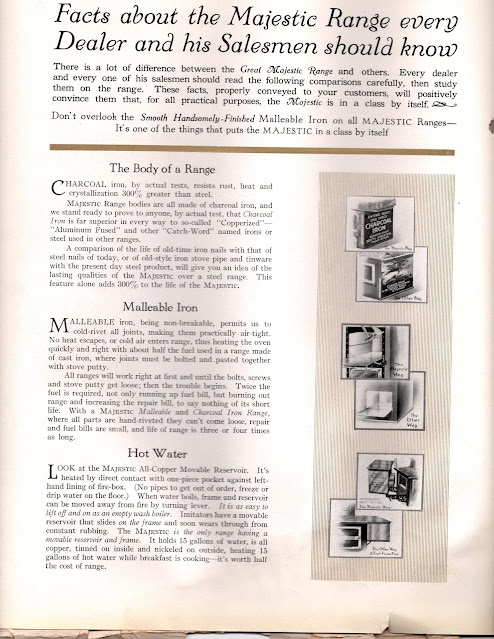 The section about malleable iron on the above page is interesting.  It touts the superiority of malleable iron over cast iron, saying in part that the life of a Majestic Range is three or four times as long as an all casti-iron range.  I would be interested to hear what modern-day stove restorers have to say about that.  It is my understanding that the all-cast-iron ranges built in the Northeast are far easier to restore, and from the looks of what is on the internet, a lot of them have lasted pretty well.  I invite those who are much more knowledgeable than I to put their two cents worth in the comments section at the bottom of this post.
The information about the "Pin Extension Malleable Iron Water Front" on the next page explains how the Majestic waterfront provides more hot water than any other design.  The Majestic waterjacket design was certainly unique.  It had a series of circular "pins" that protruded from the top right side, thus vastly increasing the surface area where water could be heated.  Majestic used this design for many years.  I think it probably worked very well.
I would have to say, however, that in the range where I saw one installed, I think the pins would have been in the way when trying to put larger chunks of wood in the fire.  You can sort of see the front pin sticking out over the piece of wood burning in the firebox in the photograph below.  This range was at Mill Creek Antiques in Paxico, Kansas.
Following that, is the obligatory information about how wonderful the oven is.  I have yet to run across any stove brochure, flyer, or advertisement that doesn't advertise how wonderfully the oven bakes--and always on so little fuel! 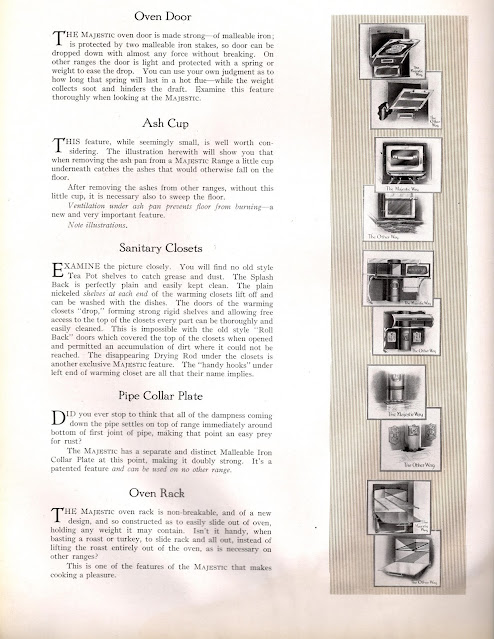 The page below talks about the warming closet below the baking oven.  This was a feature that some New England ranges had, but in Midwestern ranges I believe it was unique to Home Comfort and the cabinet-style Majestics.  They advertise that you can dry wood and shoes down there. 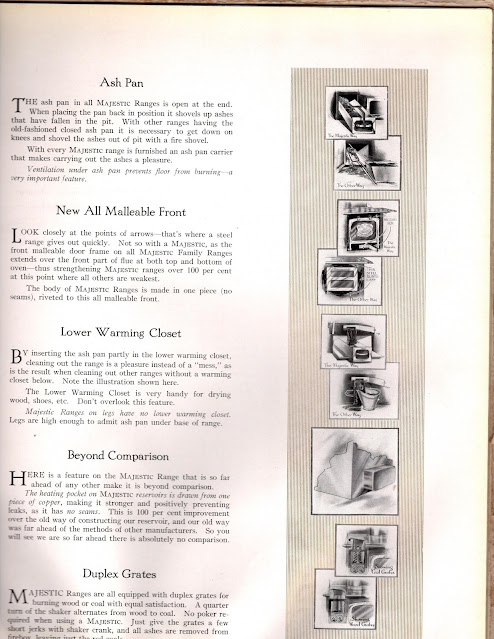 And now for the pictures of the stoves!
In the text boxes at the top right of each picture, you can see the different sizes that each model range came in. 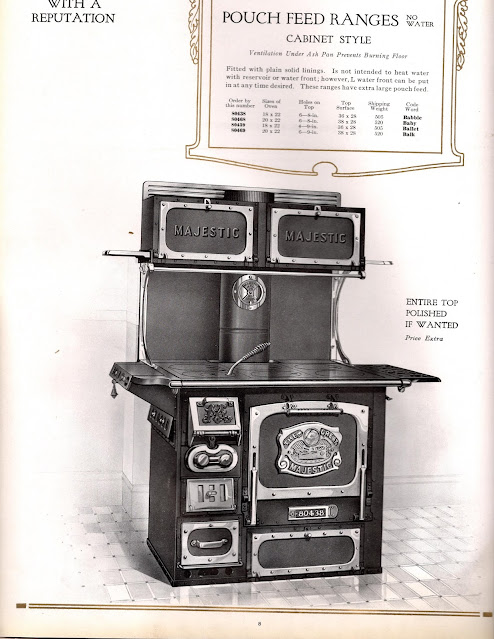 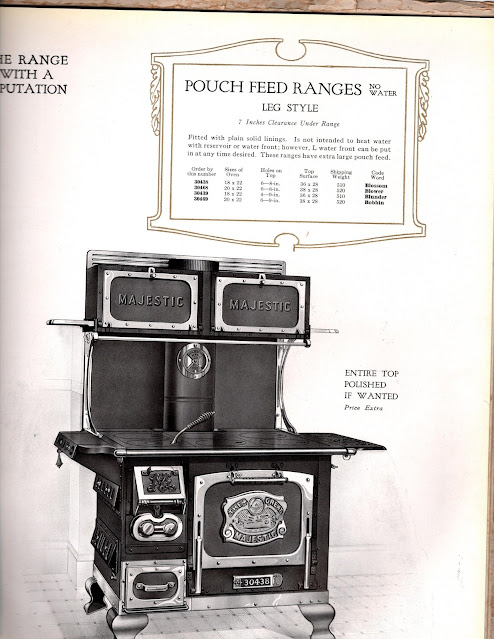 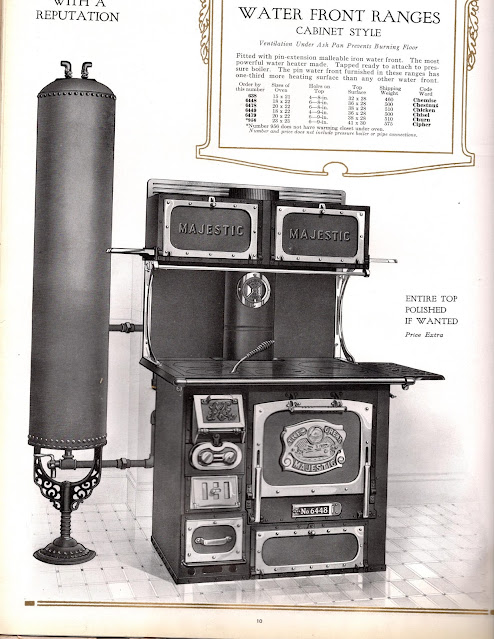 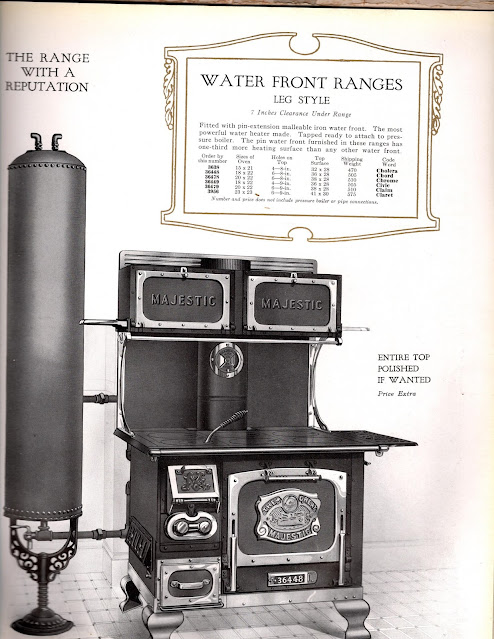 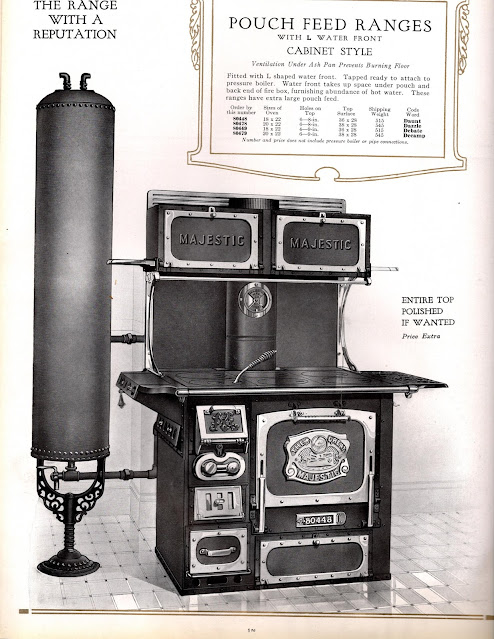 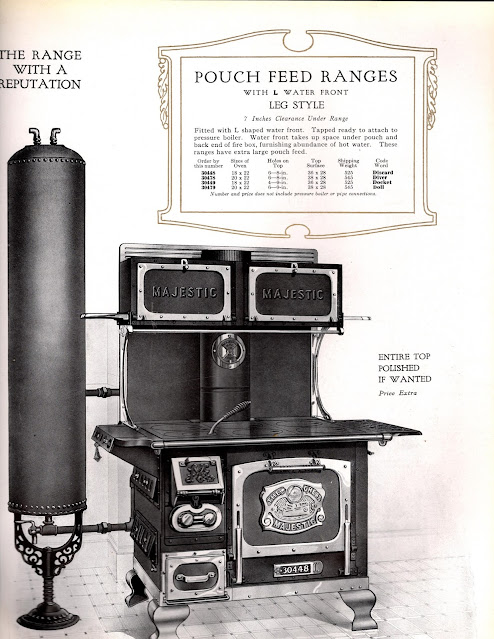 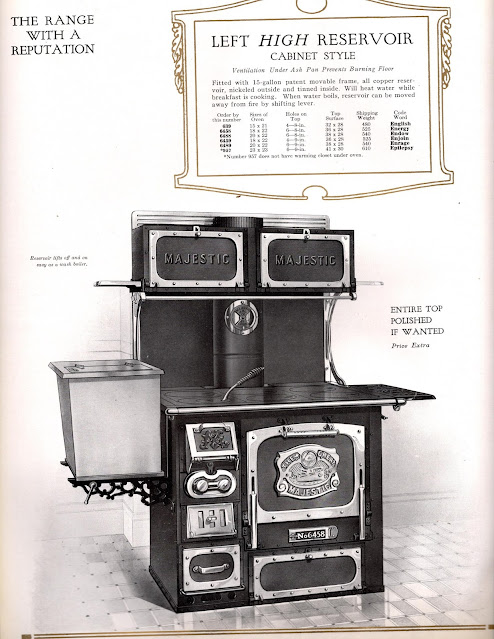 I wonder how well the range in the picture below actually sold.  To me, it looks very inconvenient to operate because the only draft is located below that whole reservoir assembly! 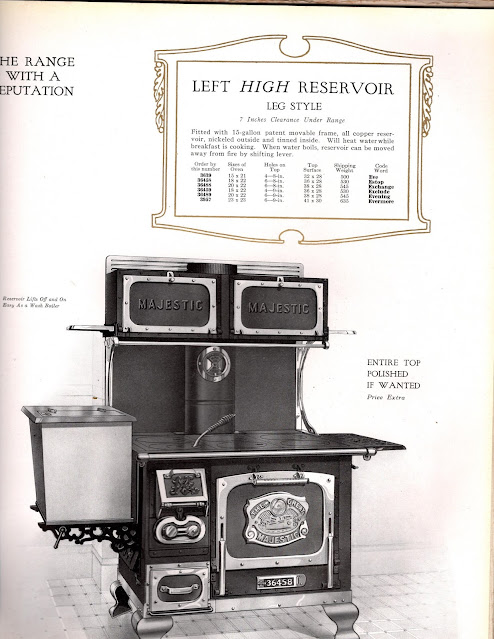 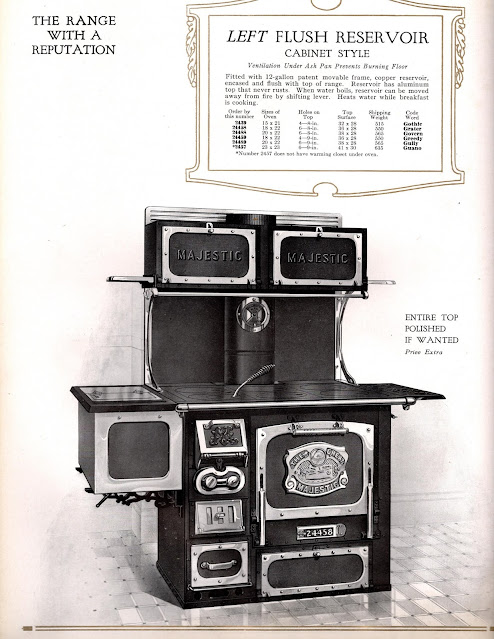 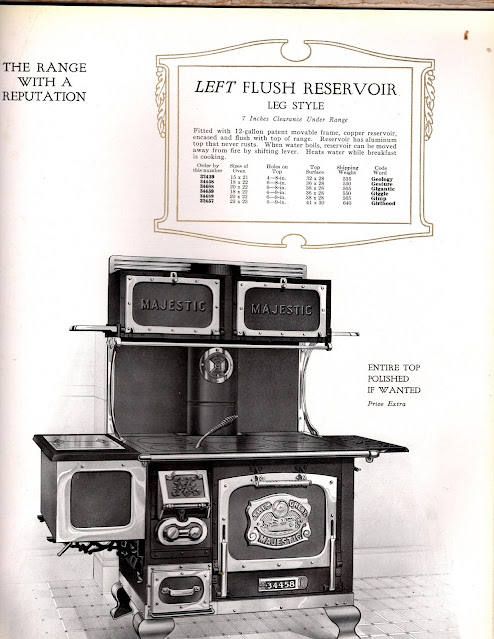 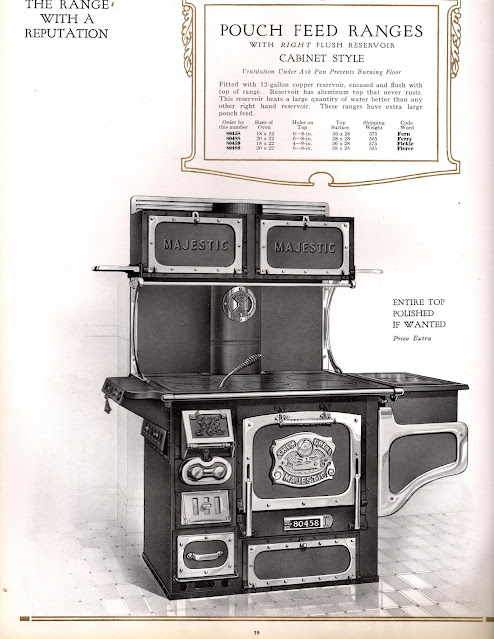 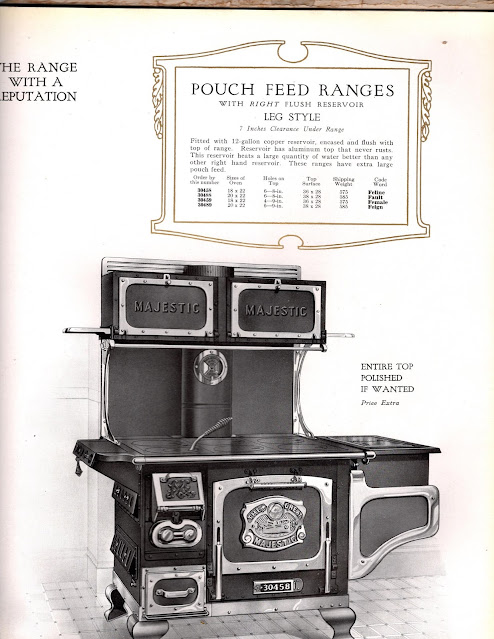 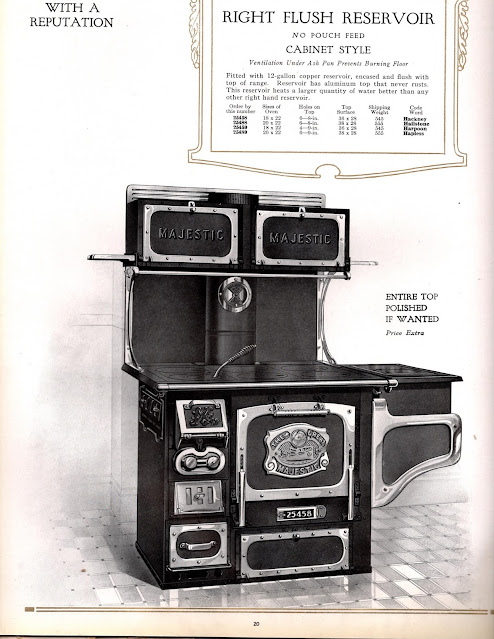 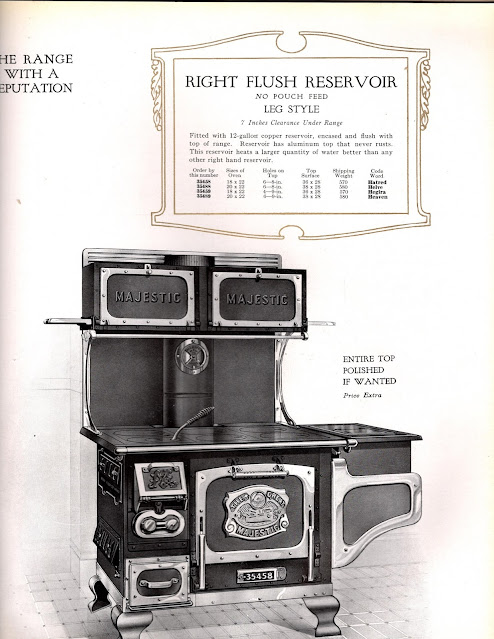 A very similar stove to the one above is currently for sale on Ebay.  You can see it here:
https://www.ebay.com/itm/The-Great-Majestic-Stove-functional-and-new-chrome/303742237307?hash=item46b872ba7b:g:MdkAAOSwYvNfl5Wf
Ranges that were equipped with both a water reservoir and a waterfront and boiler were quite common in houses where running water had been installed.  The reservoir was most often used to heat rainwater, which was collected from the roofs of houses in cisterns.  It was valued for washing dishes, clothing, and hair because it was "soft."  In other words, it didn't have all the minerals of well water and therefore cooperated with soap better and provided better cleaning.
The waterfront and range boiler were usually connected to water systems providing well water or city water, which would be under pressure so that it could be piped throughout the home. 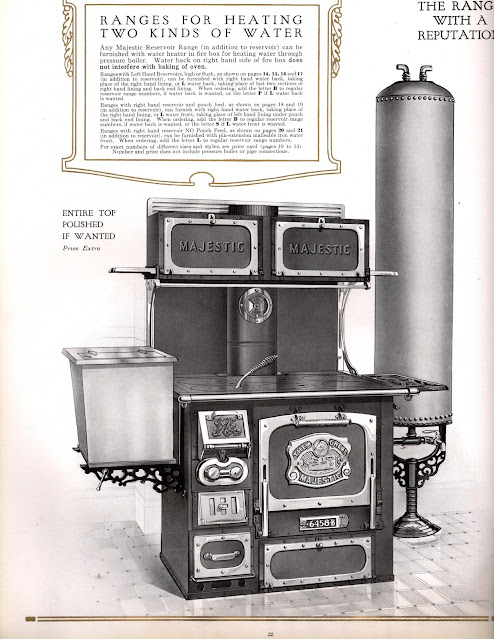 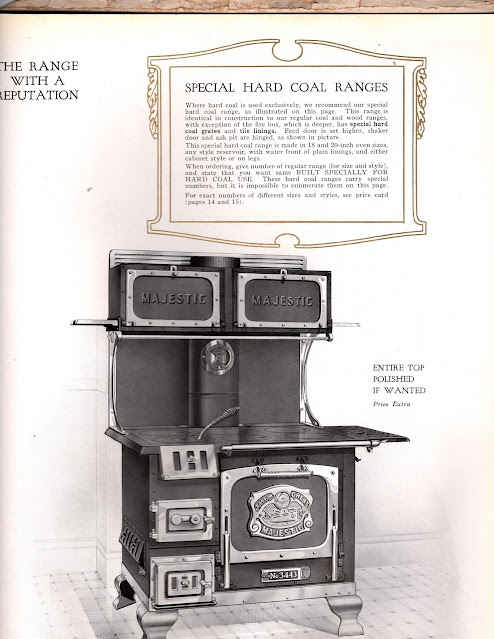 Combination ranges were coming into fashion during this time.  The gas side was used during warmer weather when the ability to shut the heat off as soon as cooking was finished kept the kitchen much cooler. 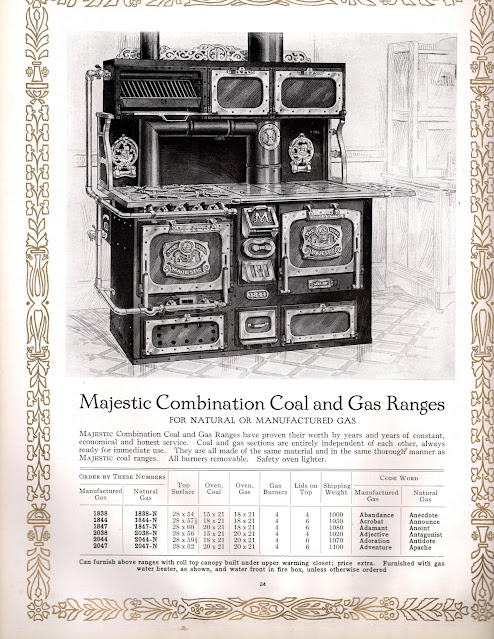 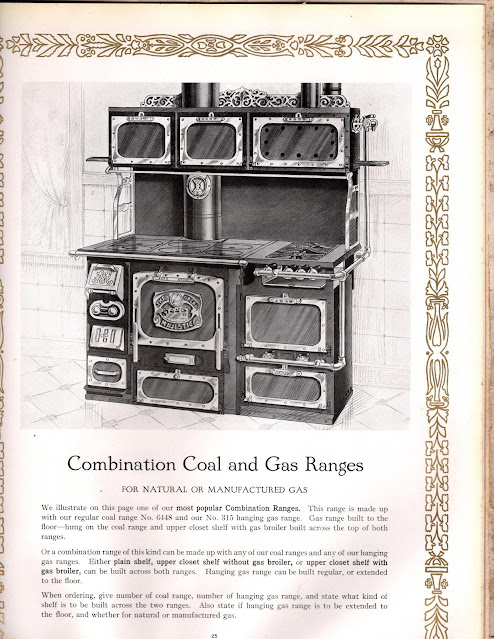 And now for the pie´ces de re´sistance:
Someday...someday I hope to get a chance to cook on a stove like one of these!

I would love to know how the flues in the range above were designed because the description says "One fire box will heat one, two, or three ovens, as needed, or entire top can be heated without heating the ovens."  How did that work? 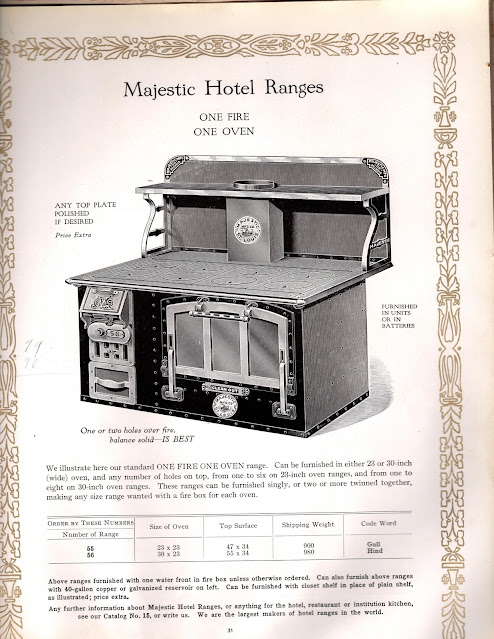 According to the information here, Majestic was the largest manufacturer of hotel ranges in the world.  These ranges could be "twinned" with as many of them as were desired, thus making the long, multi-ovened beasts you see in historic photographs of places like the White House kitchen.  Man!  Cooking on one of these looks like so much fun! 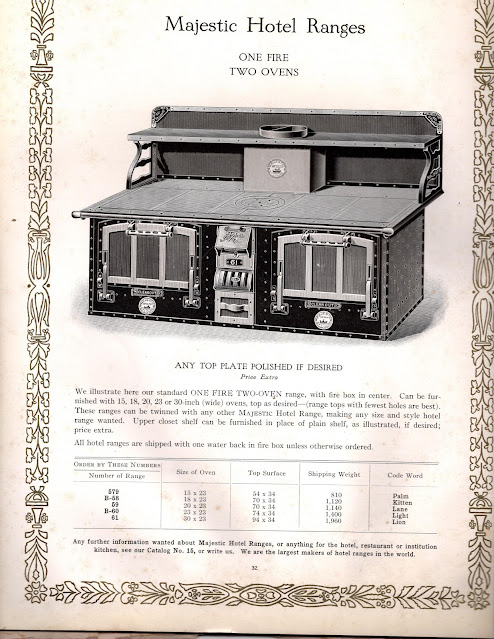 So, are any of you dear readers cooking on a Great Majestic?  If so, tell us all what you think of it in the comments below.
Posted by Jim at 1:31 PM 3 comments:

Request for Help from a Flameview Owner

Yesterday, a comment was placed on this post about the Flameview that I feel needs a little more attention than it will probably get in its original location.  The comment is below.  If any of you Flameview owners can help this fellow wood cookstove owner out, that would be great.

Help!  I have a Flameview wood stove with warming shelf and am in need of the manual. Can't find the sucker anywhere.  Can someone on here email it to me, please?   djmontowski@gmail.com  Thanks in advance!