This is the first time that I've ever posted a recipe on my blog that involves deep-fat frying on the wood cookstove.  We don't deep-fat fry often at all, but I'd like to.  I have to admit that I enjoy fried foods.  I always say that if someone deep-fat fried rocks, I'd eat them.

Historically, wood cookstove cooks were very willing to deep-fat fry foods (especially breads) because it is easier to manage the temperature of the cooking oil than the temperature of the oven.  Now, please don't read the last sentence and believe that it is difficult to bake in a wood cookstove. We do have to consider, however, the fact some stove designs are better than others; and no matter what design the stove is, stovetop cooking is easier than baking.  Of course, people also didn't consider fried foods as unhealthy as they do now.

So, for my first post about deep-fat frying on a wood cookstove, I'd like to share with you my method for making homemade chicken nuggets.  You might find it odd that I called chicken nuggets a meat stretcher, and I can assure you that I was very surprised to find out that this was so.  Here's how it works: If Nancy and I were going to have Poor Man's Chicken Monterey, I would cook two chicken breasts.  However, if we were going to have homemade chicken nuggets, one chicken breast would be more than sufficient.  Thus, you can stretch a small amount of chicken over quite a few people by using this method of preparing it.

Here is what you need:


Cornstarch
Buttermilk
Baking Powder
Eggs
Pepper and Seasoned Salt (or whatever seasonings you want)
Chicken (We use either boneless breasts or thighs.) 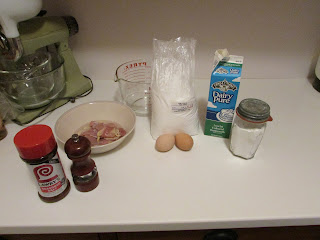 Now, the first thing to do is to build a hot fire in the wood cookstove. Whenever you deep-fat fry, you  need a very hot fire.

Second, put an inch of oil in the bottom of some kind of pan with tall sides. I like to deep-fat fry in a cast iron chicken fryer.  You want something with tall sides so that the hot oil doesn't slosh or splatter out onto the cooktop of the stove.  Place the pan of oil on the hottest part of the cooktop to begin heating.  It goes without saying that whenever you have oil heating for deep-fat frying, you want to keep an eye on it.  This is especially true when you are heating oil on any kind of stove where the heat beneath the oil is not under thermostatic control.

The third thing to do is cut the chicken up into small pieces.  Usually, I try to cut the pieces into 1" x 2" pieces that are about 3/8" thick.  You can make them as large as you want, but the smaller they are, the quicker they will cook and the further you can stretch the meat.


Next, beat two eggs in a medium to large mixing bowl.  (I prefer to use a bowl that has a fairly flat bottom to make coating the chicken easier, so I usually use our 8-cup glass Pyrex measuring cup.)

Add 1 cup of cornstarch, about 3/4 tsp. baking powder, pepper and seasoned salt to taste, and enough buttermilk to make a batter that is a little thicker than pancake and waffle batter.  Using cornstarch instead of flour is what makes this recipe gluten-free, and it also allows the batter to cling to the chicken better.

Dip the chicken pieces into the batter, being sure to coat them on all sides. Place them in the hot oil and begin frying them on one side. 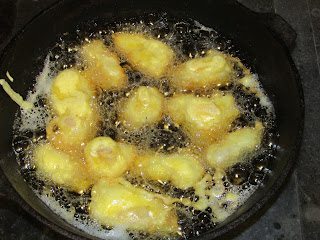 Fry them until they are a deep golden brown on the bottom side.  The fire should be kept very hot during the entire time that the nuggets are frying.


Turn the nuggets over with a fork so that they can fry on the other side.  As long as the size of the chicken pieces has been kept fairly thin, there won't be any trouble with the chicken being thoroughly cooked in the same amount of time it takes for the outside of them to become a nice golden brown. 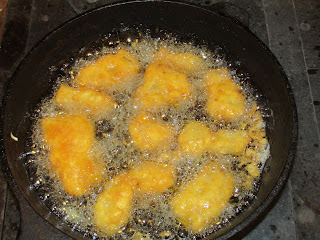 Remove the chicken nuggets to a paper-towel-covered plate to drain and cool a little before they are eaten.

I like to dip my chicken nuggets in sweet and sour sauce, whereas Nancy prefers barbecue sauce or ranch dressing.  Either way, these are cheap and quick.

Some words of caution about deep-fat frying on a wood cookstove:

1. Oil spilled on the cooktop can easily ignite.  At the very least, it will smoke horribly, so be careful to prevent that.

2. In order to adjust the heat beneath the frying oil, you may need to move the pan around on the stovetop.  This can be dangerous, so be careful!

3. As soon as you are done frying, you'll need to remove the pan of hot oil from the stove.  This also can be dangerous, so plan accordingly.

In order to get the oil for deep-fat frying hot enough, I sometimes have had to remove one of the lids over the fire and place the pan directly above the flames.  This does perhaps elevate the level of danger, but I'm not sure that it would be any worse than deep-fat frying over a gas flame.

I hope to eventually share a few more deep-fat fried recipes, but even though I enjoy fried foods, I don't make them at home very often.

As a record-keeping side note, we operated the Margin Gem daily from September 21, 2018, to May 14, 2019.  I would have liked to continue using the stove daily well after the fourteenth of May, but though we haven't been affected at all by the local flooding, we have had a very wet spring, and we just plain ran out of dry fuel.  We have run the stove a couple of times in the month of June, too, since it's been pretty cool a lot of the summer.