I love popovers!  I haven't made them in quite some time, but I decided to throw them together tonight since our chickens have been keeping us very well-supplied with eggs.

I wish I could remember where I got this recipe.  When I worked for the bank, sometimes I would be sent to work in the Avoca office.  I enjoyed substituting there because they had a break room where I could eat my lunch, and in that break room, they always had a stack of cookbooks that I would sit and peruse while I waited for my lunch hour to be over.  Thus, I know that I copied this recipe out of one of their cookbooks, but I didn't write down which one.

Popovers are extremely easy and fun to bake, and if you are a homesteader or farmer with your own chickens and dairy cow, you can produce most of the ingredients that you need by yourself.  Here is what you will need:


Popovers Fontaine
3 Tblsp. melted butter
3 eggs
1 cup milk
1 cup flour
1/2 tsp. salt
First, build your fire so that you will have a hot oven.  You're shooting for about 400 degrees.  Then, put the butter in a dish in the warming oven or on top of the reservoir (or wherever) of the range to melt.


Grease 8 five-ounce custard cups and place them on a baking pan with edges.  I know that some people bake popovers in muffin tins, but I've never had very good luck with that, and using custard cups has never failed me.  You MUST put the cups on a pan.  Most of the shortening that you use to grease the cups will come out and dribble down the sides of the cups onto the pan.  You don't want that mess on the bottom of your oven! 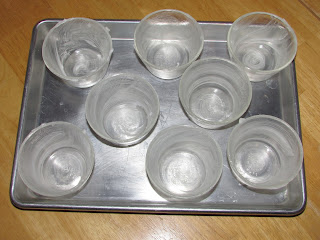 Beat the rest of the ingredients together with a whisk.  Add the melted butter last.  The batter may look a little lumpy.
Fill custard cups half full of the batter.  Place in the oven until they puff up and are golden brown.  The recipe originally stated that they needed to be baked from 45-50 minutes.  I find that amount of time to be way too long. 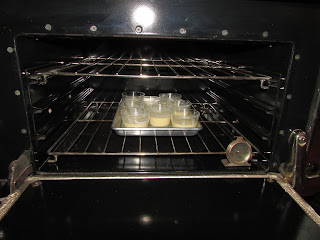 I love to watch popovers bake.  You never can predict how they are going to look when they come out of the oven. 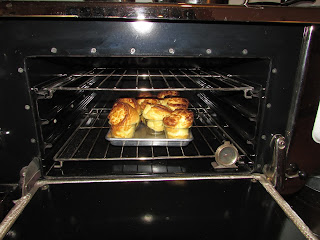 I always eat these with a little homemade pancake syrup, but I think that they would be good dusted with a little powdered sugar, too.  Fruit makes a great accompaniment for popovers. 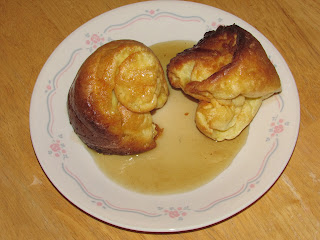 My favorite memory surrounding this recipe is from the day Nancy and I were married.  My aunt and uncle stayed overnight here with me on the night before we were married, and so I baked popovers in the Qualified Range for our breakfast.  Just as we were sitting down to eat, my brother and my sister both arrived separately, so I ended up serving an impromptu breakfast for five that morning.  If you have unexpected company, these are an easy but novel go-to food.  I hope you enjoy them!
﻿
Posted by Jim at 8:48 PM 2 comments:

Email ThisBlogThis!Share to TwitterShare to FacebookShare to Pinterest
Labels: baking in a cookstove, eggs

Chinese Cooking: Taking Your Wood Cookstove for a "Wok"

Nancy and I love Chinese food.  We both savor every bite of crab rangoon, but she prefers cashew or sesame chicken, while I have a deep and abiding affection for sweet and sour.  I had never eaten Chinese food at all until I went to college at Ames, and I don't even remember what prompted me to wander into my first Chinese restaurant there on Welch Avenue in Campustown, but I'm surely glad that I did.

Long ago, before the shopping mall that is closest to our home became a virtual ghost town, there was a fairly decent Chinese restaurant in the food court there.  The restaurant was designed so that you could watch the cooks prepare your food while you waited, and I'll admit to being fascinated by the fast-paced, fiery spectacle that Chinese cooking presented.  Thus, when I saw an out-of-the-ordinary wok on clearance in Atlantic, I snatched it up.

The wok is out of the ordinary because, instead of having a completely rounded base, it has a base that fits down inside the "eye" of the cooktop. 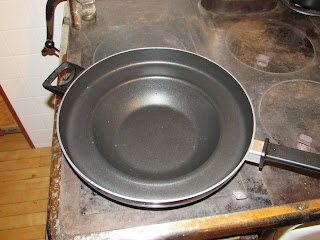 The directions that were attached to the wok at purchase stated that the shelf around the perimeter of the wok is to be used as a place where you can put cooked food to stay hot while other food is cooked down at the center base.

It may be kind of weird, but I always associate woodburning cookstoves with distinctly American cooking, but it turns out that they are surprisingly well suited to Chinese cooking.  In the photos below, you can see what I mean.  I'm not going to share any recipe in this post because I'm very new to the homemade-Chinese-cooking experience, and I'm not completely happy with the things that I have created yet--tasty though they were.
The first thing that I did was cook the sauce for our entrée.  As soon as it was finished, it was removed to a trivet at the back of the stove.  Then I made the fried rice.﻿
Wok cooking is usually done for a very short time at a very high heat.  Thus, building a hot fire and then putting the wok down in one of the eyes above the firebox creates the ideal wok cooking scenario.
Once the fried rice is finished, it can be put into the warming oven so that it stays hot while the meat is cooked.
Since the base of the wok is so small, only a little of the meat can be cooked at a time.  As the meat (in this case chicken) cooked, I removed it from the wok to drain on a paper towel-covered plate in the warming oven.
﻿﻿

Once the meat is finished frying and has all had a chance to drain, the oil is discarded from the wok and then the meat and sauce are combined and cooked in it for a very short time.  Everything is then served over the fried rice.
Of course, one wouldn't have to have a wok as unique as mine to make Chinese on a wood cookstove.  In fact, one wouldn't need a wok at all to make the Chinese dishes that I've been experimenting with, but it certainly goes a long way to making my concoctions feel authentic.  Either way, the wood cookstove is great for cooking Chinese!
Posted by Jim at 9:05 PM 6 comments: