A Vintage Piece of Advice

As we are getting ready for the family reunion which will be held at our house in early July, we've been having discussions about the menu.  My brother's most recent suggestion is to have a vintage menu from 1887, which is when our great-great-great-grandparents purchased the farm where Nancy and I live.  This prompted me to do some research last night because I have the hand written cookbook that my great-grandmother (the first of the family to live on this farm) started before she was married.

The book includes a few clippings from an unidentified newspaper which were written by Faith Felgar.    You can learn more about her here.  I'm including it on this blog because it does mention the use of a woodburning range and because sometimes I take for granted how easy baking bread has become in this day of reliable yeast and consistently milled flour.  For that matter, in today's world where so many households never have any from-scratch cooking occurring in them, this article is a good reminder of what our ancestors went through in order to just have a slice of bread.  There is no date on the clipping, but it was pasted between pages with recipes dated January 1914 and February 1914, so it is a safe bet that this column is just over 100 years old.

"Dear Faith Felgar,
Why is it my bread gets so dark and holy [sic] when baked?  I knead it for half an hour the first time, then work it down, but it inclines to flatten and be sticky to the hands.  I would give so much to always be sure of the outcome with the bread.  We buy the highest-priced flour and we all like good bread, but mine is never very nice, so I'm quite discouraged.  I will be grateful for any help you are able to give.
IRENE
As nights grow cooler the making of a really good loaf requires a bit more care, and though it is not difficult, it must not be neglected, for on such little things as temperature and heating depends our success or failure.
Follow this to the letter just once and report:
Any young housewife that has bother with bread will be pleased with the result and if it helps you, help me be saying so:
Into a teacup put one cake of dry yeast (this is for large batch), a half cake for four or six small loaves, and allow enough warm water to cover.  New milk is a good guide for temperature where there is no thermometer.  When soft and tiny sparkling bubbles appear in the liquid it shows that the germs are active.  Now beat in enough flour to make a stiff batter; cover cup with inverted saucer and keep in warm place.  In the warming closet of a range is usually suitable, but if firing heavily it may be too hot. When light, beat it down and let it rise again.  I have never had bad results if this had to be attended to several times before 8 p.m., but this time of year there is little bother with rapid growth.  Three medium white potatoes boiled in their jackets, peeled and mashed while hot.  Do not use the water they were boiled in.  Ordinarily I use just some mashed potatoes and the liquid drained from them, as it is less bother, but when I want to find if it is the yeast, the miller or I, I use the potatoes cooked without paring.
To these three potatoes add half a gallon of water for small batch.  Remember to have it the right heat and warm the flour by stirring it over the fire.  Be gentle with the heat and stir well or it will become full of hard lumps.  Add the cup of sponge, then beat in the flour.  Do not beat a certain number of minutes, but count the strokes--150 is none too many--and the spoon must be brought from the bottom upward in and over and over motion.  Never stir round and round.  Put on the lid (no slang intended) and wrap the vessel, which should be not over one-third full, in a clean cloth, and over this throw any heavy rug--ironing blanket or what not--to keep the temperature uniform.
In the morning warm another pan of flour and work this in until the bread becomes elastic and will not stick to the board.
Add the salt and sugar if you wish and a bit of lard when you stiffen the sponge.  The first is all I use for light, delicious bread.
Dip a cloth in melted lard and run over the mass; return to vessel to become light.  Never neglect it till it has spent its energy or it will not be so good.  When it doubles, work down.  Next time make into loaves, covering each lightly with melted fat.  Keep from draft.
Loaves made so will rise straight up, be white and flaky--no coarse holes--and sweet to the taste.  In the oven it will continue to rise, not run, and should brown slightly in fifteen minutes.
Leave in oven until the loaves shrink a little.  It is then done entirely to the center."

I might try this method sometime, but for now, I'll stick to my usual. 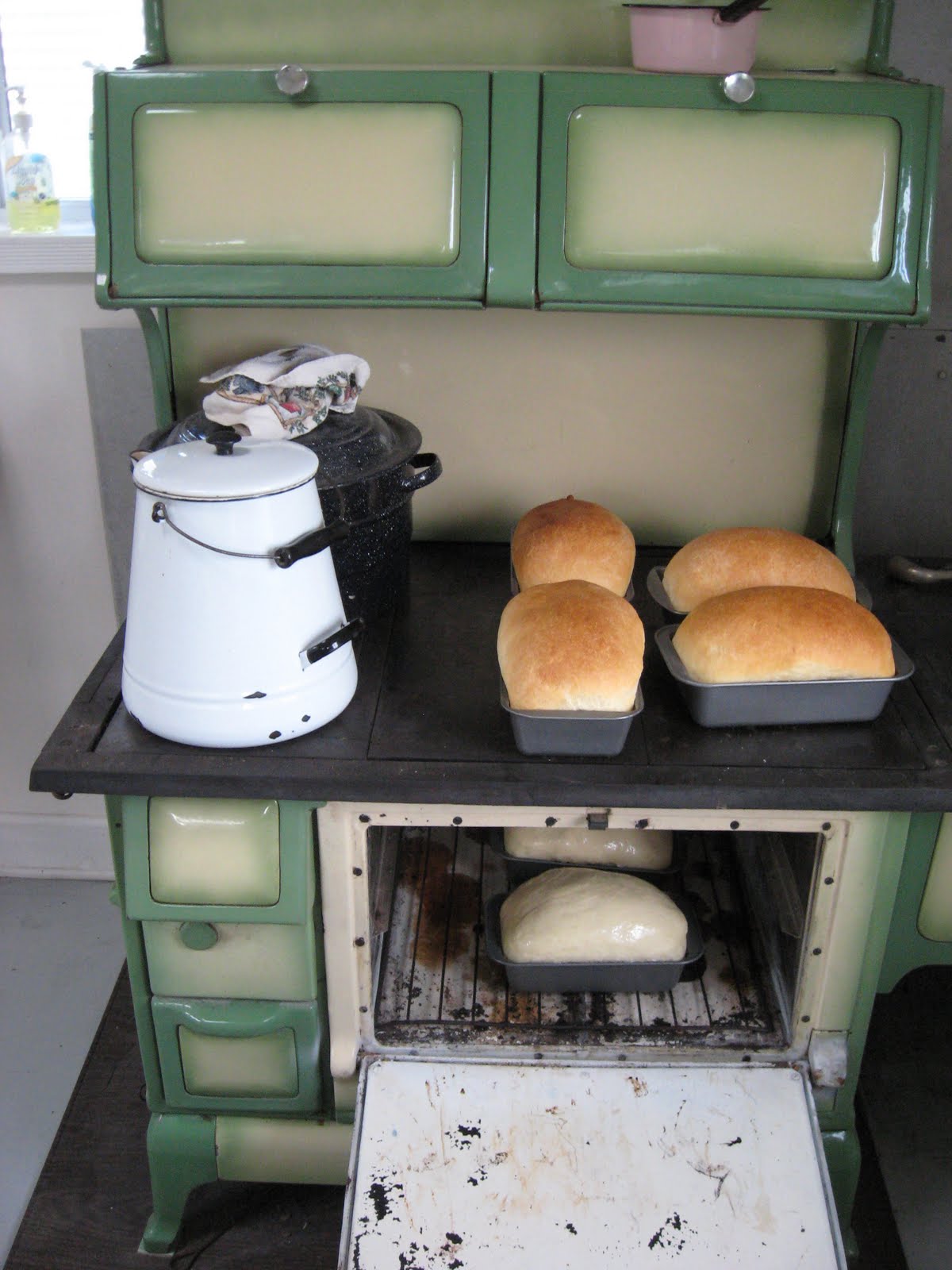