I continually troll about on eBay looking at the woodburning cookstoves that are for sale there, and I ran across a surprise the other day: the exact same model cookstove that Nancy's grandparents started keeping house with when they were first married in 1938.  Rue and Ruth purchased this stove with some of the money that Ruth had saved from her four years as a country school teacher.  They purchased this stove from Montgomery Ward's, and it was their sole means of cooking until sometime in the early 1950s.

Rue and Ruth's stove is now in our possession.  It is not in quite as good a shape as the one in the picture, but I think it is more complete because the handle on the front left door is still connected.  We hope to have it restored someday.

The stove in the picture can be seen here.  The eBay description says that it was still in regular use this year.  Pretty good record, I'd say.

I want to transfer the other pictures to this blog post to keep as a record. 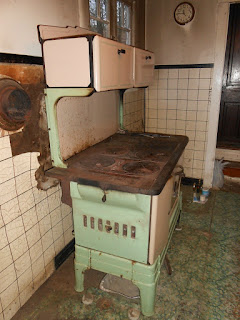 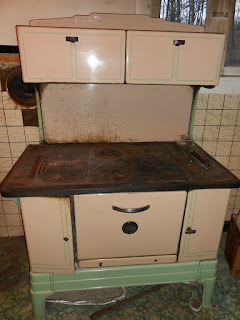 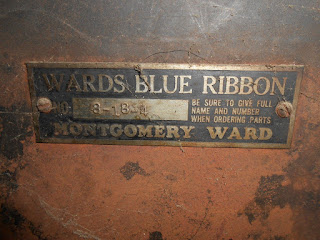 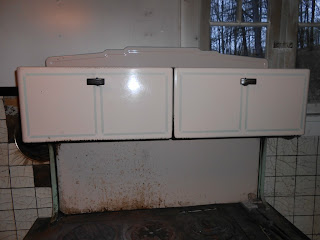 The weather has been pretty wet in our part of Iowa over the last several weeks.  After last year's drought, most everyone around here is quite thankful, though it would be nice if it would be dry long enough to finish planting.

At any rate, our strawberry beds have been really enjoying the abundant moisture, and it looks like we'll have a nice little strawberry crop if everything continues as it has been.  I've mentioned before that homegrown, vine-ripened strawberries were quite abundant in my childhood.  During that glorious first month of summer vacation, it seemed like they were everywhere, and many family members got together to pick and preserve them.  Each year, there were also strawberry pies.  I can remember Grandma Marian, Meme, and Mom all making them, but theirs were always the fresh-strawberry kind with a cooked gelatin/cornstarch glaze poured over the top--certainly very tasty in their own right.

I, however, have a weakness for cooked fruit, and when I saw the historians serving a double-crusted strawberry pie on the 1900 Farm at Living History Farms in Urbandale one summer, I set out to find a recipe.  I looked through my recipe boxes.  I looked through my recipe clippings.  I looked through my cookbooks (if you saw the embarrassingly large collection of cookbooks around here, you'd know how impressive this undertaking really was), and found nothing.  Nothing!  Well, that's not quite true; a vague recipe for "Berry Pie" appeared in one of the vintage cookbooks, but it seemed far more suited to raspberries and the like rather than strawberries.  So, I finally had to turn to the Internet.

I know, I know.  Many of you reading this will think that I should have started with the World Wide Web, but you have to understand me.  I live in a world with rotary phones, for goodness' sake!  When it comes to food, my first instinct is not to turn to the Internet yet; it is still to begin poring through pages of real, hold-it-in-your-hand paper.

The Internet came through for me, however.  I found this recipe at allrecipes.com, and it fit the bill.  I changed it slightly for what I was looking for, and I am happy with the results.  I saw strawberries on sale at a nearby supermarket for $.99 per pound and couldn't wait for our own strawberries to make this pie again, so on Monday (Memorial Day) I threw one together.

When I bake a pie with fresh fruit, I always start by mixing the crust.  You can see how I make pie crust by looking at the recent post about apple pie.  I mix the crust first because I don't want the filling mixture to sit too long so that a lot of the juice is pulled out of the fruit before the pie is in the oven.

The first time I made this pie, I used the flour as the filling thickener as the recipe says.  However, it resulted in a cloudy and somewhat runny filling that wasn't quite what I had envisioned.  I had read somewhere that cornstarch has twice the thickening power as flour, and that is what I have used in place of the flour ever since.

I also scanted the sugar and the cinnamon.  I really don't think that the 1 1/4 cups of sugar is too sweet, but as I stated before, one of the para-educators at school is inspiring me to be a little more health conscious.  I scanted the cinnamon just because I like to taste the fruit in a fruit pie rather than the spices.  Altogether then, the changes to the filling recipe are as follows:

Instead of 1/3 cup all-purpose flour, 1 1/4 cups sugar, and 1/2 tsp. cinnamon, I used 1/3 cup cornstarch, 1 cup sugar, and cinnamon to taste.  Oh, and I omitted the butter, too.  I don't have anything against butter, but I haven't been able to tell the difference in the flavor of the filling with or without it, so I figure I don't need the extra fat.  Aren't you proud of me, Mrs. B.?

After that, I assembled the pie as you see me do in other posts and baked it in a hot oven until the crust was nicely browned and I could see that the filling was boiling nicely.  With the fire that we had going on Monday, that took somewhere between forty-five minutes and an hour.

I like baking this pie in the woodburning cookstove because it feels old-fashioned.  I'm sure that this, along with strawberry-rhubarb pies, was one of the first fruit pies of the summer season for our ancestors who lived in the days before readily available strawberry gelatin changed the Midwestern dinner table forever.  I hope you enjoy it as much as I do!

Email ThisBlogThis!Share to TwitterShare to FacebookShare to Pinterest
Labels: baking in a cookstove, baking pies, strawberries

Off the Grid News.com published a nice article about wood cookstoves today.  The article has a link to our blog, so it showed up in our traffic sources this evening.  I'm just returning the favor and publishing a link to their article.  It is a good read.

Egg sandwiches cooked on the cookstove were our supper tonight.  I've got many things to tell you all, but I need to spend time wrapping up the school year.  Be patient with me.

Hope everyone is doing well!
Posted by Jim at 7:50 PM 4 comments: