When people ask me what my favorite Christmas memory is, I have to say that Christmas 2002 was my favorite.  My grandparents on my dad's side passed away within a week of each other in June of 2001.  At the time of their deaths, they owned the farm where I live now.  I was raised here; my dad was raised here, and my grandfather was raised here.  I had been living in our house since 1998, but as the farm passed from my grandparents' ownership into their estate, unfortunate circumstances beyond my control dictated that I leave the farm while it was sold.

To make a long and emotionally exhausting story very short, in early 2002 my brother and I were able to buy our farm from my grandparents' estate with the incredibly generous help of my parents.  I would just like to take this opportunity to publicly admit that at the time, I was so caught up in the turmoil of the year's events that I did not even begin to realize how great a sacrifice that my parents--escpecially my dad--made for us.  A decade later, I'm still only beginning to realize the magnitude of what he did, and, though I would find it awkward to tell him face-to-face, I've got to say that I stand in awe of my dad's colossal charity toward his children, and I am totally humbled by it.

Needless to say, Christmas 2001 was a stressful one, and I was feeling the loss of our family home quite keenly.  So when Christmas 2002 was approaching and I was back at home and the farm was still in the family, I asked to host Christmas for my immediate family so that we could be back celebrating in the house where everyone except my mom had grown up.  I was celebrating the birth of my Savior that Christmas, but I was also celebrating being home for Christmas.

Preparations began right after Thanksgiving.  Every day after I got home from the bank where I worked at the time, I cleaned, decorated, planned, or cooked something in preparation for the big day.  At the bank, my co-workers asked every morning about the progress that had been made the night before and kept tabs on my activities.  Susan, the teller, was quite interested in the dietary aspects of the whole prospect and brought in her favorite holiday cookbook.  It was a vintage Ideals publication with beautiful 1960s-style photographs of various foods made from the recipes within, and it further spurred me on.

I dug out old family recipes and pored over cookbooks after I had gotten too tired for physical labor in the evenings.  It has always been my family's tradition to have a large breakfast together on Christmas morning, so I was making decisions for both meals, trying to seek the right blend of familiar traditions and appropriate new additions to the Christmas menus.  In the days immediately preceding Christmas, the Qualified Range was busy with boiling candies and baking various sweets.  For the main Christmas dinner, I had carefully selected foods and pans that could all fit in the Qualified's oven because the oven on the electric stove that I had then was on the blink.

I used a couple of the recipes from Susan's cookbook, but I used its recipe for pork loin roast as a launch point for my own creation that turned out surprisingly good.  This recipe was such a hit that we used it for our church's annual Valentine's Dinner in February of 2003, and I made it again last Sunday for dinner.

First, prepare an approximately eight-pound pork loin by rubbing it with a combination of 1 tsp. allspice and 2 tsp. salt.  Place the loin in a covered roaster with about a 1/4 c. of water, and roast it in whatever combination of time and temperature you prefer.  I had to cut the loin in half so that it would fit in our large enamel roaster. 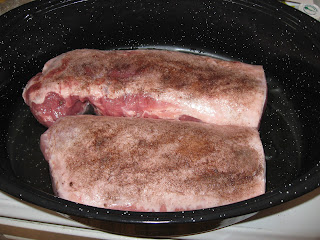 I took advantage of the Margin Gem's ability to hold a constant fire while we are gone to church, and cooked the loin "automatically" by filling the firebox with as much wood as I could and then dampering it down.  When we got home, the internal temperature of the meat registered one hundred seventy-two degrees--done! 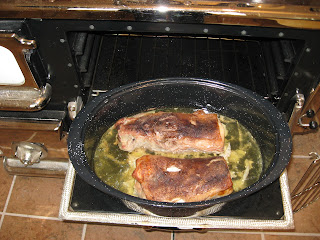 I still needed to make and add the glaze, but since the pork was already cooked, I put the lid back on the roaster and slid the whole thing back in the oven, leaving the oven door open.

To make the glaze, I combined 3/4 c. boiled cider, 1 c. red plum jam (or you could use currant jelly), 1/2 tsp. allspice, and 3 TBLS. ketchup (I used some of our homemade).  Bring to a boil and simmer two minutes.  I spread part of this glaze on the loin, covered it again, and put it back in the oven with the door closed while I finished mashing the potatoes and making the other last minute meal preparations.  The rest of the glaze was moved to the coolest part of the cooktop to remain warm so that it could be served at the table.

Unfortunately, in the rush of getting the other foods finished and to the table at the same time for the ten of us who were eating together, I forgot to take pictures of the pork loin once it was glazed and of the glaze itself.  Sorry.  As a consolation, I will show you the picture that I did manage to take of the honey-kissed carrots which had baked alongside the pork loin in the oven while we were gone. 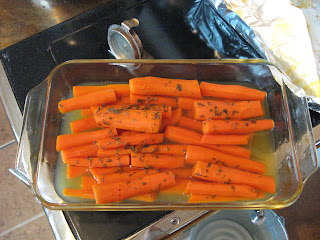 Here is the recipe in a more accessible form:


Boiled Cider Glazed Pork Loin
8 lb. pork loin
Rub with:
1 tsp. allspice
2 tsp. salt
Roast pork loin using your preferred method.
During last half hour of cooking time, glaze
with the following:
3/4 c. thick boiled cider
1 c. red plum jam (or currant jelly)
1/2 tsp. allspice
3 Tblsp. ketchup
Simmer glaze ingredients for two minutes.  Pour
about half of the glaze on the pork loin during the
last half hour of the cooking time, reserving the rest
to be served at the table.
I mentioned my earthly father's sacrifices for his children earlier.  As we prepare for the Christmas season, I urge you to remember that the reason that we celebrate Christmas is because of the sacrifice that our Heavenly Father made when He sent His Son to become one of us, to die for us, and to offer us the gift of eternal life with Him.  Hope you are having a blessed Christmas season!﻿
﻿
Posted by Jim at 9:44 AM

Email ThisBlogThis!Share to TwitterShare to FacebookShare to Pinterest
Labels: cooking on a wood cookstove, pork recipes