A Fat-Free Vintage Candy Perfect for the Wood Cookstove

My great-great aunt Meme, who is mentioned in the "About Me" section to the left, had a copy of the 1926 West Pottawattamie County Farm Bureau Women's Cookbook to which she and her sister and cousins had been contributors.  When I was young, it was old and yellowed and tattered and falling apart.  I've inherited it now, and it is still old and yellowed and tattered and falling apart.  It is filled with recipes that take one back to when diets were limited by what you could grow yourself, what you could catch and kill, and what few exotics came by train to rural Iowa's tiny grocery stores.

My family has lived in West Pottawattamie County for over one hundred and fifty years, so it is fun to read over the recipes which were contributed by family members whom I've only heard about or seen in ancient black and white photographs.  However, some of the names in the cookbook also belong to people that I knew in my childhood, people of the generation born in the late 1890s who had been considered elderly for a score of years before I came along.  I'm sure that I would recognize even more of the names, except that in 1926 the women had the habit of calling themselves "Mrs. Geo. Galloway" or "Mrs. S. S. Wymore."  What was Mrs. Galloway's first name?  For that matter, what did Mr. Wymore's "S. S." stand for?

In addition to the challenges with the names, the recipes themselves are challenging at times.  They assume quite a lot, and you definitely have to have been cooking a wide variety of foods for quite awhile before you can even begin to make sense of some of the directions.  They are all also clearly written for people who were cooking on wood or coal-fired ranges.  In fact, in our area of Iowa, most rural cooks (and many in small towns) did not part with their wood cookstoves until after World War II when, after so many years of scraping by, the push for upgrading and buying everything new was at its peak.

While Nancy and I have been home getting ready for Christmas, I decided to branch out a little this year and make a few things that weren't on our traditional lists.  Mrs. S. S. Wymore's recipe for "Orange Squares" caught my eye (p. 274).  These are certainly a different sort of candy than what is standard fare around here, but I like them.  An additional benefit is that they are fat free, and they certainly would add a new dimension to a tray of homemade goodies.  They are also a recipe that took advantage of the cookstove's features.

To make them, you first soften 2 Tbsp. granulated Knox gelatin (this worked out to be three envelopes) in 4 Tbsp. of cold water for 10 minutes.

Then, you pour 3/4 c. of boiling water over this.  There's that use of the teakettle again.  Add 1 pound of sugar and 1/8 tsp. salt.  Then bring it to a boil and boil for ten minutes. 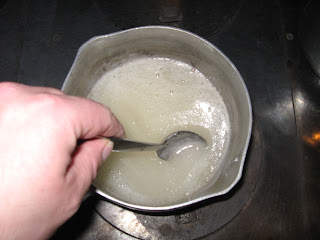 As it is boiling, it looks like egg whites that have been beaten for just a couple of seconds. 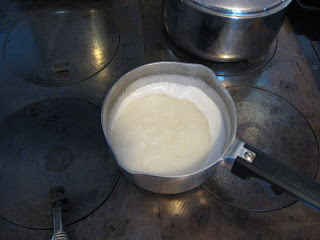 Remove from the fire, partly cool, then stir in 1/2 tsp. orange extract and the grated rind of one orange.  Pour into a shallow pan that has been dipped in cold water.  Later in her directions, Mrs. Wymore says that you can add coconut and chopped nuts, so we did that. 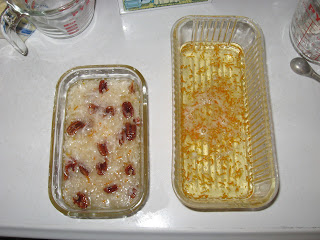 These need to be set aside overnight to congeal.  Then the interesting and challenging part comes because you have to cut them and get them out of the dishes.  Though Mrs. Wymore didn't say so, here is what you have to do: dip your sharp paring knife into cold water and dip the pans into the hot water of the reservoir in order to soften the candy around the edges and bottom.

Cut into squares and roll in sifted powdered sugar.

﻿
These have been met with mixed reviews at our house.  My mom disliked the texture, saying that they felt like "eyeballs."  Really, they're very similar to finger Jello but they have a much more natural taste.  I'm not a nut or coconut lover, but I think that the pan with the coconut and pecans is probably the better quality candy.  They're novel if nothing else.
Here is the way the recipe originally appeared in 1926:
Orange Squares
Mrs. S. S. Wymore
2 Tbsp. granulated gelatine [sic]
4 Tbsp. cold water
3/4 c. boiling water
1 orange rind grated
1 lb. sugar
1/8 tsp. salt
1/2 tsp. orange extract
Soften the gelatine by allowing it to tand for ten minutes in the cold water, then pour the boiling water over it.  Add sugar and salt, bring to a boiling point and boil for 10 minutes.  Remove from fire, partly cool, then stir in orange rind and flavoring.  Pour in a shallow pan that has been dipped in cold water.  Set aside over night, cut in squares and roll in powdered sugar.  If desired pour half in small pan and to remaining half add chopped nuts and cocoanut [sic].
﻿

As homemade candies go, this one is light and refreshing.  Give it a try!
Posted by Jim at 12:38 PM