Not too many years ago, Nancy, her mother, and I had all gone down to Clearfield, Iowa, to visit Nancy's grandparents.  Nancy's grandma Ruth, an avid cook in her day and still a food aficionada at age 97, had apparently been rummaging through old cookbooks and had decided to send a couple home with Nancy's mom.  I was not the driver on the two-hour return trip, so I sat in the back seat and read the cookbooks.  One of them was the 1915 Clearfield Presbyterian Church Cookbook.  The Clearfield Presbyterian Church is long gone, but a recipe that caught my eye needs to be carried into the future.

The recipe was simply labeled "Beef Loaf," but what made me pay attention to it was the ingredient list.  Most meatloaf recipes are fairly similar in nature: meat, meat stretcher, an egg or two, some moisture, and your seasonings.  What caught my eye about the ingredients was that this recipe included ground bacon.  Now, I'm an unashamed meatloaf lover, and I've had meatloaf that was draped in bacon, but the idea of grinding bacon and including it inside the meatloaf was intriguing to me.  Furthermore, with not nearly enough shame, I will admit that I believe the following verse: "Bacon and butter make everything better."  Thus, I definitely had to try this recipe!

The first try was a success; the second try earned me an "I sure wish I could make a meatloaf like you" at a church dinner.  Thus, this recipe has now become one of my "go to" recipes when cooking for a potluck, so I pulled it out for the Nightingale Circle Christmas Potluck which we hosted at our house last Wednesday evening.  Here is what you do: 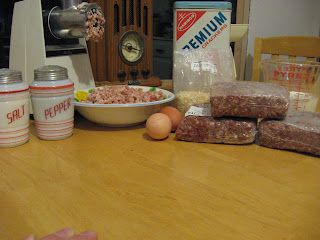 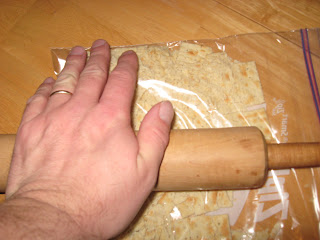 2. Grind one pound of bacon and set aside. 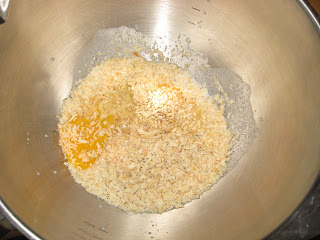 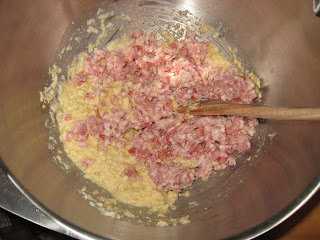 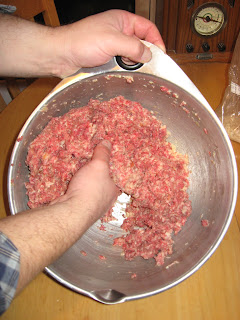 6. Shape into a loaf and put into a baking dish.

7. Bake in a moderate oven for approximately 1 1/2 hours.


8. During the last ten minutes, I like to glaze it with two cups of homemade ketchup, about 3/4 of a cup of brown sugar, and two teaspoons of dry mustard. 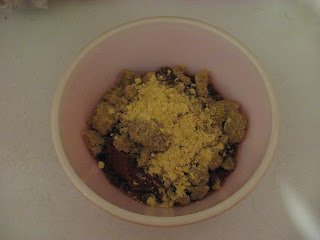 Mix all of that together until it is smooth and poor over the top of the meatloaf.

a) At first glance, one might think that this meatloaf is bound to be greasy since it has a pound of bacon in it.  Surprisingly, most of the bacon fat cooks out during baking, and there is no greasy texture or taste.

b) Because the bacon fat cooks out, the hot fat tends to sputter a lot in the oven, so be prepared to run a damp cloth over the inside of the oven after it has cooled down to being just warm.

c) The original recipe did not call for the dried onion or the glaze, but it was quite bland without them.  The original recipe also called for a tablespoon of butter.  Despite my mantra above, I leave that out because it seems superfluous even to me.


I hope you enjoy this one as much as I do.