I am just old enough to remember the time when microwave ovens came into popular use.  My parents bought theirs shortly after I was born, but I distinctly remember when both sets of my grandparents bought theirs, and I was near to junior high age when my aunt Meme began to use one.  No one in our family did much cooking in their microwaves; their primary service was to re-heat leftovers, and I think (with a few exceptions) that is how most of us still use them.

Eventually, I'd like to do a series of posts about how to use a woodburning cookstove to re-warm leftovers because one of the purposes of this blog is to show people what a flexible appliance wood cookstoves are.  Another purpose of the blog is to show that older methods of cooking can still be viable in today's world.

Now, I'm not sure that the recipe that I'm about to share even really qualifies as cooking because it is so easy--"food preparation" yes, but "cooking" not so much.  This is because the heat is only applied to some ingredients to melt them, not to change their chemical composition.  (Some may say that a comment like that makes me into a cooking snob.  Guilty as charged, I guess.)  However, the end product is delicious, and you can't make this dessert without using some heat-producing device or other.

This recipe came from cooks.com, which appears to have somewhere around three billion recipes for grasshopper pie.  I had printed it off many years ago and pasted it into my binder of dessert recipe clippings.  A short search to try to find it again online so that I could provide link to it was unsuccessful, so just know that I'm not taking any credit for this one at all.

1. The first thing to do is to melt the pound of marshmallows with the 1/2 c. of milk.  My copy of the recipe even says right on it "can be done in microwave," but I decided to do this the old-fashioned way and melt them in the top of a double-boiler.  I can remember my mom and Meme doing this when they made Rice Krispie Treats®.  I started them directly over the fire, but ended up moving them to a cooler spot to just keep the water at a simmer rather than a rolling boil.  The marshmallows may begin to stick a little if the water below them is boiling too hard. 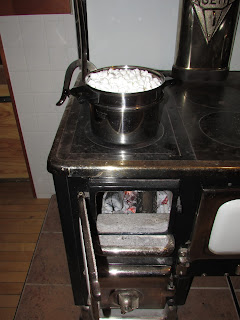 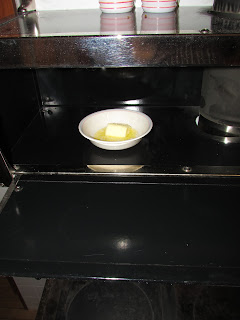 3. As the marshmallows melt, stir them occasionally to speed the process and to mix in the milk. 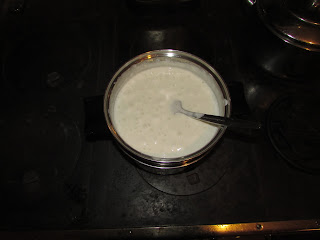 4. When you can no longer see any marshmallow lumps, remove the top part of the double boiler to a trivet to cool completely.

5. At about the time the marshmallows are melted, the butter should be melted too.  Crush the Oreo® cookies using either a rolling pin or a food processor.  I was in a hurry, so I used the food processor, and I have to admit that I think that machine is great.  Mix the 3 Tbsp. melted butter into the cookie crumbs and pour them into a nine-inch pie plate. 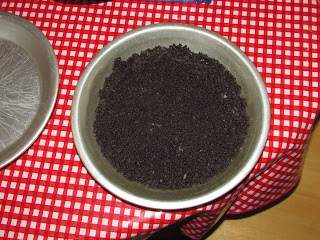 6. I used another pie plate that was the same size to quickly press the crumbs into a crust. 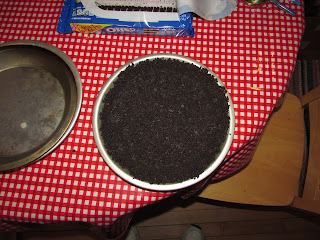 7. Once the crust is ready, the next step is to whip the cup and a half of cream until it is stiff.


8. Add the cooled melted marshmallow/milk mixture to the whipped cream.   Add the liqueurs and mix thoroughly.


9. Pour the mixture into the prepared crust.  Then decorate with Andes Mint® shavings and put the whole thing in the freezer. 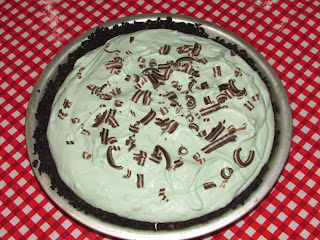 10.  Just before serving, melt the rest of the Andes Mints® with a little cream and butter to make a chocolate mint sauce.  If you have a steady fire burning in the range when you do this, be sure to keep the pot as far away from the fire as possible.  You want to have only a gentle heat for melting chocolate. 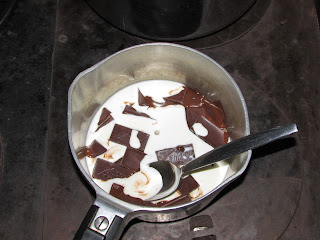 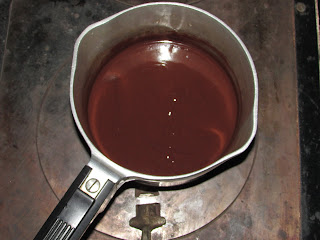 11. When serving, drizzle a little of the melted chocolate mixture over each piece of the grasshopper pie. 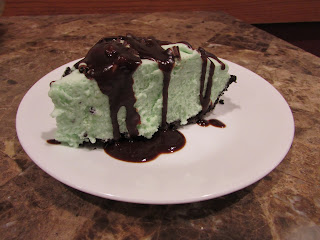 Just an FYI: When I made the pie in the pictures above, I actually made two pies, and used the microwave to melt the marshmallows for the other one.  I don't know why, but the marshmallows melted in the double boiler were much fluffier and gave the nice volume to the filling that you see above.  Those melted in the microwave were runny, and the pie was consequently a little less attractive.  Of course, flavor was not affected at all.

This is one of Nancy's favorite desserts, and I hope you all enjoy it!

Email ThisBlogThis!Share to TwitterShare to FacebookShare to Pinterest
Labels: cooking on a wood cookstove