Well, after having a fire in the Margin Gem every day since Sept. 27, 2017, which was when we turned the electric hot water heater off for the season, we finally decided to tie a bow on the 2017-2018 wood heating season this morning.

I know several of you just gasped and shook your head at the discovery that over the last few days we had still been using the wood cookstove daily when our temperatures have been soaring into the upper nineties, even reaching 100 on Saturday.  Other readers who know me just had their suspicions regarding my sanity confirmed with this revelation.

To use the cookstove exclusively for hot water from Sept. 27 - May 27th ties our record which was set during the 2013-2014 heating season. During this time, not only was all hot water heated with wood, but I think all but about five of the meals which were cooked at home were also cooked over wood heat.  One of those five meals was a regular meal a couple of days ago.  The others were just boiled eggs or frozen pizza.

Some of you may be wondering how we were able to use the stove for so long in such warm weather without suffering too much.  Many factors contributed to our endurance:

1) Our century-old farmhouse was designed to have a woodburning cookstove in the kitchen.  This is a major factor in our ability to use the stove in warm weather.  The kitchen has six doors that open into other areas of the house, but all of these except for the pantry doorway can be closed in order to keep the heat out of the rest of the house.  The large east windows are double-hung, so the top sashes can be lowered in order to facilitate heat escape.


Also, since it is a two-story house and the stairway opens into the kitchen, we can open the upstairs door and let a great deal of the heat escape up the stairs where a fan was positioned in a window at the top of the stairs blowing hot air out of the house.

When our kitchen re-model is finished, yet another way to exhaust heat from the stove will be restored, so stay tuned for another blog post about that.

2) Our house is surrounded by large old shade trees.  Our shade is not as dense as it once was, but we still have a lot of it, and this makes our house stay much cooler in general.

3) We don't have to have a long-running fire in order to have sufficient hot water to meet our needs.  A fire which burns briskly for less than an hour creates more than enough hot water for a good shower in the morning. This also means that I used small pieces of wood which burned hot but not long.

4) We closed the "hyper-heat" reservoir damper and often opened the oven damper so that the stove itself wasn't radiating so much heat into the kitchen.


5) I would also fill the teakettle and our 40-cup coffee pot and put them directly over the firebox while the fire was burning.  These, coupled with the water in the reservoir, supplemented the hot water in the boiler and provided enough hot water to wash dishes and do a little laundry when necessary.  Of course, water in the kettles and the reservoir was used in the wringer washer and in hand washed laundry only.  It would have been difficult to get it into the high-efficiency front-loader. Anyway, heating water in this way absorbed the majority of the BTU's which would have emanated into the house from the cooktop. 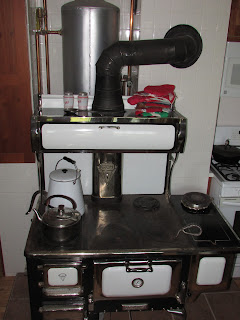 6) Though we had some extremely warm days, the nights were still getting cool, so we could pull all of the heat out of the house during the night. Then we would shut the windows in the morning before the outdoor temperature got warmer than the indoor temperature.

7) The weather we have been having has been extremely dry.  This is not a bit good for any of our crops, but it made it so that the high temperatures were more bearable than they usually are in our area of the country.

Q. So what changed between yesterday and today?

A. Last night the outdoor temperature did not fall as low as it has been.  It was 67º outside when I woke up a little before 6:30 a.m.  The living room temperature was still at 77º.  This was only four degrees lower than the high temperature that we observed yesterday afternoon.  I always kind of figure that 70º is roughly our breaking point for comfort.  If the outdoor temperature doesn't dip sufficiently below that during the night,  we are uncomfortable.

Thus, after draining the electric water heater and flushing it out (the water in it always sours), we are back to paying for hot water, and I even broke down and turned on the air conditioning.  I'm feeling pretty weak today, but I'm comfortable!

Now, don't think I won't have anything to blog about over the next few months.  My goal is to get the summer kitchen moved from the end of the driveway up to the north side of the house within the month (we'll see if that happens), and I have a raft of wood cookstove literature to review, too, so check in frequently.  We'll be in touch!
Posted by Jim at 1:13 PM