Using a Grill Roaster on a Wood Cookstove 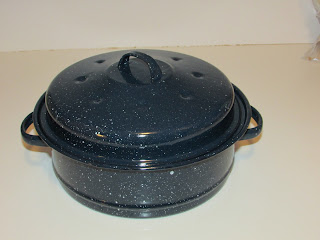 What makes it a "grill roaster" is the fact that the bottom is perforated. 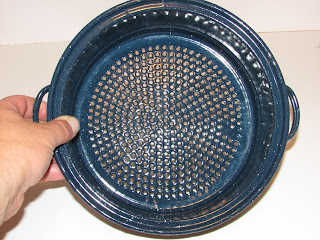 I bought it expressly for using on a wood cookstove because it looked like the round shape would fit perfectly in an eye over the firebox of the Qualified Range.  I think perhaps it is truly meant for roasting vegetables on the grill, but from the beginning I wanted to try cooking a beef roast in it. I don't know why, but I wasn't ready to try it right away when I bought it, so I relegated it to a shelf in the fruit room in the basement.  And there it sat until Friday when I brought it out, washed it, and finally got around to trying it.

The roaster does fit neatly over the eyes of the Qualified, the Hayes-Custer, and the Margin Gem.  Bingo!

For Friday night's supper, I seasoned a beef roast with seasoned salt and Mrs. Dash and put it in the grill roaster, the inside bottom of which I had coated with non-stick cooking spray.

My fire that night was fueled by a combination of mulberry, elm, and pear wood, and I didn't manage it any differently than I would have under ordinary circumstances--mostly because I was also cooking corn on the cob, fresh green beans, and frying angel hair nests.  (The fried angel hair nests sounded like a much better idea than they turned out to be.  Going to have to work on that one.)

I put the roaster over the rear opening above the firebox, removing the lid so that it was directly over the flames. 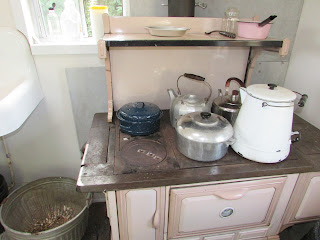 The juices that the meat dropped into the fire were burned immediately, and the summer kitchen (and the air outside the summer kitchen) smelled like I was grilling.  I could tell from the aroma early on that the roast was cooking pretty quickly, so I turned it not long after I had put it on to cook. 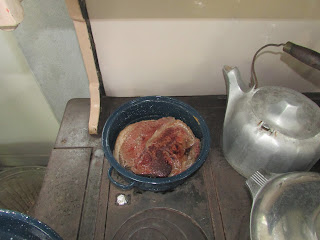 For the size roast it was, it didn't take long for it to cook at all.  I had to turn it frequently to make sure that neither side was burning, and it smelled awesome the whole time it was cooking. 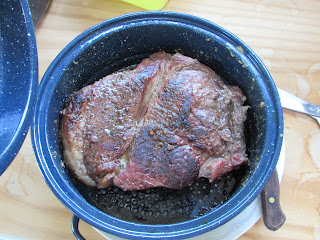 The flavor of the roast was outstanding--exactly like grilled steak.  You would have thought I had used charcoal.  It was tough, however, but I do not attribute that to the cooking method or speed.  I knew from the start that the particular cut I had bought would never be tender.  It was not what I would ordinarily have bought for a beef roast, but it was cheap.  I'll do better next time, and there will be a next time.

Overall, I was very pleased with the way the grill roaster worked on the wood cookstove.  There was no noticeable difference in the firebox or ash pan due to the juices dropping into the fire, either.  We will certainly be trying other foods cooked in this manner.
Posted by Jim at 10:20 AM