I don't think I'm an alarmist, and I really wouldn't even consider myself a prepper, BUT...

I'll admit that when everything fell apart in practically the blink of an eye back in March, we were thankful that a) we had a well-stocked fruit room, pantry, and freezer, b) that for years now we have made it a practice to have more than enough toilet paper on hand at all times, c) we had kept a complete year's worth of garden seed (hadn't planned that intentionally--just a happy accident this time), and d) we had more than enough work, projects, puzzles, board games, and other activities to keep us so busy at home that there has been no time for boredom.

I don't have a crystal ball that lets me see into the future, and I think I'm like the vast majority of people who, if they are being truly honest, don't know which "experts" to believe regarding what the coming months of the continuing Covid Saga will look like.  And so, while most things are readily available again, we are slowly replenishing our stockpiles of a few things "just in case."

When we were at our local Sam's Club a few days ago, they had 25 lb. bags of long-grain white rice for under $10.00.  I don't know that we even eat five pounds of rice in a year, but we do like it, and in some kind of major catastrophe, it could be a welcome thing to have on hand.  As a regular habit, we keep rice in the freezer for a while and then transfer it to an antique two-quart canning jar that we use it out of.  However, we are in the season where our garden is steadily contributing to the contents of our already-full freezer, so we didn't want to sacrifice the real estate there to a large bag of rice.

I remembered reading an article in the May/June 2012 issue of Countryside & Small Stock Journal about oven canning dry goods.  I hunted up that article and reread it; then I did some further online research about oven canning flour, rice, beans, and such.  In a nutshell, the idea is that you heat the dry goods inside open canning jars for a length of time and at a temperature sufficient to kill any of the insect larvae that are inherently present in such foods.  The temperature needs to be low enough that you don't toast the food, of course.  Then, you put a hot canning lid on the hot jars of hot food, and the canning lids seal as a vacuum is created while everything cools.  This would allow us to store the rice on a shelf in the fruit room rather than in the precious space of the chest freezer, and it would be safe from both pests and environmental issues (aside from earthquakes).

However, another discovery that I made in my research was that there are no hard and fast rules for dry canning.  Each video I watched instructed me to use different times and temperatures ranging from a half-hour to an hour and a half at anywhere from 215-250ºF.

Initially, I thought I'd probably do this job in one of our modern stoves because I've never tried to maintain such a low oven temperature in a wood cookstove.  Being able to digitally set an exact temperature on our newer Frigidaire gas range was particularly enticing.  I wasn't excited about turning on one of the ovens in the air-conditioned house, though, and--truth be told--it seemed pretty hypocritical when I'm always saying that you can do anything on a wood cookstove that you can do with a modern gas or electric stove.

Then I remembered another truth that the modern appliance companies don't want to talk about much: oven temperatures in modern ovens are really not all that steady--especially in gas ovens.  I know this for a fact because when our gas oven is first turned on, it gives a reading of what the current oven temperature is.  Sometimes, I've accidentally turned it off and then had to turn it back on right away, and I can assure you that when you are choosing an oven temperature on a modern oven, you are choosing an average temperature.  Thus, I figured that oven canning in a wood cookstove was certainly possible and struck out on a new adventure with the Hayes-Custer out in the summer kitchen.

The first thing I did was wash a bunch of one-quart canning jars.  Then, to make sure that they were completely dry inside, I put them on a jelly roll pan in a slow oven for fifteen minutes. 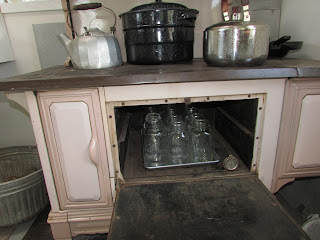 After that, I removed them from the oven and filled them with the dry rice.

It seems important to note here that one of the jars in this first batch had a regular mouth on it and the Atlas insignia on the bottom, though it didn't have the traditional "Atlas Strong Shoulder Mason" embossed on the side. We have used it for wet canning before, so I thought it would be fine for this application.  Not so.  The empty jar came out of the oven with fine lines that looked like crazing on the inside.  I ran my finger against the inside of the jar, and it came out with shiny glass powder on it. Obviously, the jar's useful life is over.  I know that there were lots of regular mouth glass jars which were used to package coffee, salad dressing, and other foodstuffs years ago, and many of them have been successfully used for home-canning against the advice of the jar companies and the USDA for a long time.  However, it appears that oven canning may be particularly hard on this type of jar, so I would advise strictly using canning jars.

Once the jars were full, everything went back into the oven.  I'm not going to share the time and temperature that I used (I'm not throwing my hat into that ring!), but I will tell you about regulating the oven temperature:

Longtime blog readers will no doubt be tired of me preaching the value of using little pieces of wood for building hot fires for high oven temperatures, but the same is true for maintaining the temperature of a slow oven.  The difference is that you just don't put so many pieces on the fire at once. Instead, let each piece burn down quite a bit before you add another.

Actually, there is another method for maintaining a slow oven, too: once you have a well-established bed of coals but before the oven is very hot, add a single large piece of wood which is dense and will burn slowly for a long time.  I used this method with a piece of black walnut on the second batch of jars, and it worked great, too.

As a side note, I think it would be rather difficult to do much other cooking while simultaneously oven canning just because you are keeping such a cool fire.  The fire might be perfect for stews and the like, though. 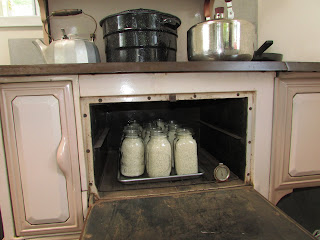 Place the lids and rings that you are going to use in a shallow baking pan. During the last fifteen minutes of the time that the jars of dry goods are in the oven, put the pan of lids and rings in the oven to heat up as well.  A nice feature of oven canning dry goods is that you can use canning lids that have already been used once.  I used half new lids and half used lids to see how it would go, and everything sealed just fine.  Tattler lids are not recommended for this application.

When the jars are ready to be sealed, take one jar out of the oven at a time.  Fix the lid and ring on the top and place the jar in a draft-free place to cool and seal. 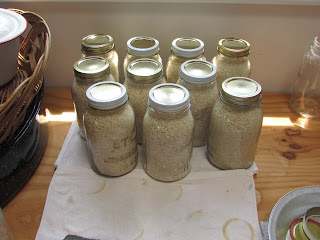 In case you are curious and for my own record-keeping, 25 lbs. of rice fills 15 quart jars.

On that same day, I also canned our first small picking of green beans (on the right in the picture below), and then I tried something new and canned hamburger patties.  I've canned meat on a wood cookstove several times, but I've never canned hamburgers.  The idea came from Linda at the Youtube channel "First Coffee Then Life Sustainably Off Grid & Happy." We'll see what we think when we open them.

Everything I have read about oven canning dry goods tells me that the shelf life of foods stored in this way is anywhere from 20 - 30 years.  I know it won't take us that long to use this rice!  Another advantage is that as long as you've got plenty of jars (we do), have kept a few used canning lids and your firewood is free, storing rice in this manner costs only your time.