I didn't have school a week ago Friday because we had had parent-teacher conferences during the week.  On Friday morning, I traveled to a farm between Elkhorn and Marne, Iowa, to purchase a flock of seven ducks.  It has been over a decade since I've had ducks here on the farm, and I've missed them.  They are so much fun to watch and listen to.


Nancy and I occasionally purchase a duck to roast because we both prefer dark meat, and since all of the meat on a duck is dark meat, it's a win-win situation for both of us.  I'm hoping that these ducks will be our breeding stock to hatch several more ducklings next year, but in the meantime, I'm enjoying having duck eggs in the refrigerator again.

The Internet has all kinds of information on the nutritional content of duck eggs, and I encourage you to investigate it all for yourself.  In the days before the internet, though, we relied on what our elders told us, so what I will tell you is that Granny (my grandmother on my dad's side) always said that duck eggs were too rich to eat plain, but they made great baked goods. Furthermore, one of our elderly farmer neighbor ladies, who has always been a great poultry woman, says that all of the best bakeries in Europe use duck eggs.  What I know from experience is that I really like to bake with them.

When we first had ducks when I was young, Meme was still baking, and she would use our duck eggs when there were enough to share.  Even though duck eggs tend to be a little larger than chicken eggs, she would use them in an even 1:1 exchange, so that is always what I have done.  Sometimes I add a little more flour to make up for the extra moisture.  So far, the only thing that I have not been able to bake with duck eggs is a from-scratch angel food cake.  Both times I tried it, the cakes fell out of the pan while they were inverted to cool.  This is an unbelievably discouraging event, so I have never tried to bake an angel food cake out of duck eggs again.

One of my favorite recipes to use duck eggs is Meme's brownies.  As near as I can tell, Meme's recipe comes from Baker's Chocolate.  It was cut out of either a magazine or a food package, and she kept it on the underside of the lid for the jar in which she kept her squares of unsweetened chocolate.  If I remember correctly, the recipe originally called for twice the amount of chocolate that she always put in it, but this was Meme's way.  She was a notorious chocolate lover, but she halved the chocolate in nearly every recipe she baked.  I don't know whether this was from motives of economy or personal preference, but because everything that we had from her kitchen was baked in that way while I was growing up, that is now my personal preference.

To make these brownies, here is what you do:

1. You'll need a moderate oven to bake these, so build your fire accordingly.

3. Combine 1/3 cup butter (Meme always used Crisco, but I think butter gives a better flavor and is cheaper when we are milking) with one ounce of unsweetened chocolate in a small sauce pan.  Place this on the stove away from the fire to slowly melt.

Soapbox Moment: I really DO NOT LIKE the new packaging on the Baker's Chocolate bars.  I want the individually wrapped ounces back.  I cannot get the bar to break along the lines!

4. While the chocolate and butter are melting, combine 1 cup sugar and two eggs.  Stir together, but don't beat too much air into it. 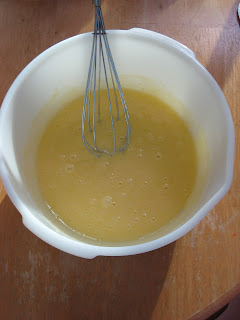 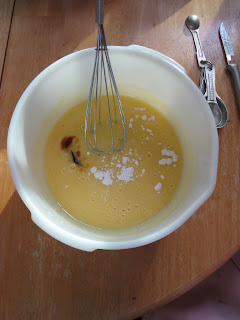 6. Pour melted butter and chocolate into egg and sugar mixture, being careful that the melted ingredients are not allowed to cook your eggs. 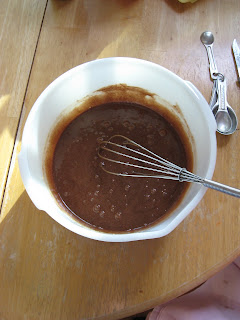 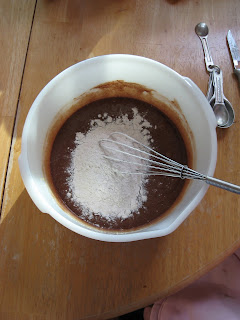 8. Pour into prepared pan and bake in a moderate oven until a toothpick inserted in the center comes out just about clean.  This can take anywhere from about twenty minutes to a half hour, depending on how hot your oven is.  Brownies are pretty forgiving of a slightly cooler oven, but if your oven is running hot, that can be more of a problem.  Remove from oven and cool. 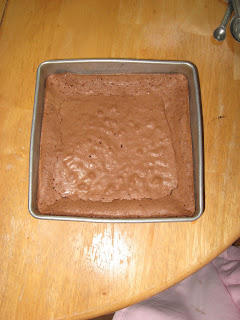 You could stop here, of course, and Nancy wishes that I would.  However, Meme always frosted her brownies, and I am of the opinion that frosting makes the world go 'round.  More than once, I have gotten funny looks from people when I fall into a glucose-induced trance, wax poetic, and murmur "Frosting is the lubricant of the world!"

Meme always made regular powdered sugar frosting with a heaping teaspoon of unsweetened cocoa in it (again, not very chocolaty) and spread it over the brownies, and that is what I do too.


There are many, many recipes for brownies floating about, and I've used several different recipes for different occasions.  I would have to admit that I've run across very few that I didn't like, but I think these are my favorite.  The texture is especially rich and chewy when they've been made with duck eggs.

Email ThisBlogThis!Share to TwitterShare to FacebookShare to Pinterest
Labels: baking in a cookstove