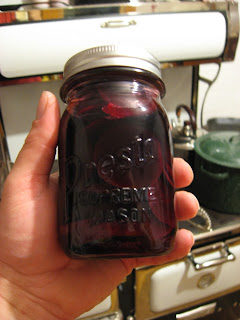 Sometimes it is just hard for me to spend large amounts of electricity or propane on cooking jobs that I know can be put off until I can do them on the wood cookstove.  I'm such a skinflint!

Pickling beets is one of those jobs that I have put off this year.  Besides the pots of hot water that are inherently a part of the canning process, some canning recipes have extended pre-cooking times that also take a fair amount of energy.  Therefore, they are perfect for the wood cookstove, so I save them for as late in the season as possible.

Pickled beets are a food that make me think of my mom's side of the family.  I remember both sides of her father's family making these delectable treats, and it is one of those foods that I associate with dinners at my grandma's house when I was very young.  That is not to say that I enjoyed them when I was very young, however.  For me, pickled beets--and beets in general--are an acquired taste, and even now, my relationship with them is kind of strange.  At the beginning of this last summer, for example, I was really longing for fresh beets to cook, but couldn't find any, and those in our garden were growing extremely slowly this year.  I found a jar of pickled beets on a shelf in the fruit room and savored them, stretching them out over several meals.  Now that autumn is here, I have no desire to eat beets, but I know that this will change again when I least expect it.

At any rate, pickled beets are kind of fun to make because of their vivid color, and they are really pretty easy as pickles go.  This recipe for pickled beets is the one that my mom's side of the family has used for many years, and so I have no idea where it originated.  It may not be as exciting as what some people have in mind when they think of pickled beets (it has no onion or visible spices in the final product, for example), but it provides exactly the flavor that I want when I bite into a dark red slice of deliciousness.

This was the first year in several that I have managed to grow a beet crop to maturity.  The multitudinous colony of rabbits here have an affinity for beet greens, and they and I have been having an annual battle about who owns the beets that I plant.  I won this year, but not without a fight.  Unfortunately, the beets were of widely varying sizes.  I'm a gardener, but not a good one, so I have no idea why this was.  The one thing I know is that it was not due to them needing to be thinned.  I decided to can the small beets whole, and slice and pickle the larger ones.

The first step for both processes is the same: wash the beets and boil them for about fifteen minutes.  This allows them to be peeled easily.


Once the time is up, fish the beets out of the boiling water with a slotted spoon and plunge them into a basin of cold water so that they will be cool enough to handle.  Slice the tops off the beets as well as the roots, then slip the skins off.

Oh, side note: I carried the cooking water out to the driveway and dumped it there.  I didn't put it down any of our sinks because I didn't want it to stain anything.  When I dumped it out, it looked like I had just committed some kind of heinous murder because it was a bright blood-red.

At this point, we took the large beets out and cut them horizontally in slices about a quarter-inch thick.  The small beets were put into pint jars to be pressure canned.

Now you must make a spice bag.  We use a 4" square cut out of one of my old undershirts.  Onto this square of cloth, place 1 tsp. allspice, 1 tsp. cinnamon, 1 tsp. cloves.  Pull up the edges of the cloth, give them a little twist, and tie them with some cotton cooking twine.

Place this spice bag into a clean kettle and add 2 cups white vinegar, 2 cups water, and 2 cups sugar.  Bring all of this to a boil and add the beet slices.  Bring everything back to a boil; then move the kettle away from the fire so that it can simmer for 15 minutes.

Once the beets have simmered for fifteen minutes, they need to be packed into jars for canning.  I can remember my mom and other women in the family using the open-kettle method for canning pickles.  I'm not scared of it, but I don't like having to mess with sterilizing jars and then handling them hot, and then I've never had very good luck with them sealing, so I opt to water bath these.  I process them for ten minutes in a boiling water bath, but you do the research and find out what you think is safe.

I use the green sweet corn kettle that you see over the back of the firebox in the picture above for small batches of water bath canning.  I've put a rack in the bottom of it to keep the jars from resting directly on the bottom of the kettle because that can cause jars to break.  It works really well.

Once the jars come out of the canner, rest them on a towel that you don't care about because if any beet juice escapes, it will cause a fantastic stain.  Then wait for that ever-rewarding pinging sound of jars sealing.

During every family canning or freezing event, Meme would always say, "Oh, these will taste so good when the snow flies," and she was always right.  These are definitely summer in a jar.

Email ThisBlogThis!Share to TwitterShare to FacebookShare to Pinterest
Labels: canning on a cookstove, canning on a wood stove, pickles, vegetable recipes