When you are using a wood cookstove to cook all of your meals, you will likely have a hot oven at each mealtime.  When the cookstove is being fired constantly for home heating, you can have a baking-temperature oven in just a few minutes at any time of the day.  This adds an element of flexibility to the menu that one does not have with a modern range.

That may sound strange, I know, but hear me out.  Now, obviously we only use our gas range in the summer months, but if we used it year 'round, I'm such a skinflint that it would bother me to turn on the gas oven for short, optional baking, so I would think twice when planning meals so as to avoid using the energy.  However, the fire that heats the cooktop of the wood burning range is also the fire that heats the oven, so no extra energy cost (or at least very little) is accrued by heating the oven--hence the extra flexibility.  Therefore, the recipe and method that I'm going to share in this post is one that I would never use in the manner that I'm going to show you if I were confined to using a modern range.

Some time ago, I received a reproduction copy of the 1950 edition of Betty Crocker's Picture Cookbook (Wiley Publishing, Inc. and General Mills, Inc.). I think that it was a Christmas gift.  I haven't used it as much as I would like, but the prose centering around one recipe for refrigerator dough caught my eye.  I'm convinced that this is the precursor to the various canned bread doughs that we now see lined up so neatly in the dairy case at the grocery store.  Every cook knows that a meal is kicked up a notch when there is fresh yeast bread to be served with it, but sometimes schedules don't allow going to the trouble of mixing and proofing dough while making other food preparations.  This is the perfect recipe to help ease that process.

Of course, I rarely follow recipes exactly, so I've made some adaptations.  Here is what I did:

On an evening when we had mashed potatoes as part of our supper (I could have mashed potatoes every day and never get tired of them), I saved the water that they were cooked in.  It turned out to be almost exactly a cup and a half of potato water.  After we had eaten supper, that water was still warm, but no longer hot, and I started mixing the roll dough.

To the potato water, I added a tablespoon of yeast, then two-thirds cup of sugar, and a bit more than a teaspoon of salt. 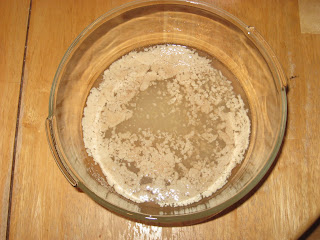 To that, I added two eggs (I used duck eggs), 2/3 c. of room-temperature shortening, and about a cup of leftover mashed potatoes. 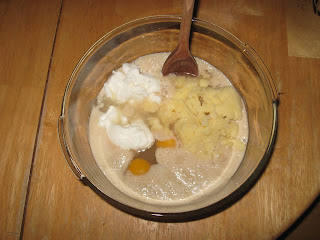 Then, I started mixing in All Trumps bread flour.  After I had added three cups of flour, I beat the dough very briskly with my spoon in order to get the gluten activated and the lumps of mashed potatoes broken down. 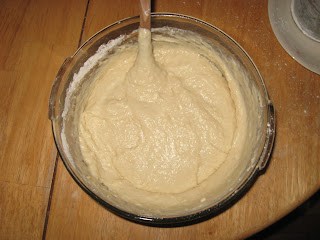 I stirred in approximately another three cups of flour and then turned the dough out onto a floured board and began to knead just enough flour into it that it stopped sticking to my hands.  It was still a pretty soft dough, though. 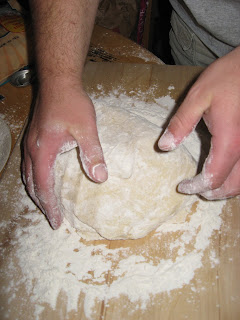 I put the dough into a clean bowl and coated it with thin layer of shortening. 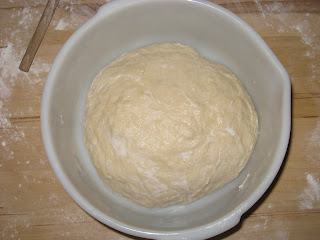 After tightly covering the bowl with plastic wrap, the whole thing went into the refrigerator.

The key to keeping this dough in good condition is to keep it refrigerated and to be sure that you punch it down regularly.  I have kept it in the fridge for as long as six days.  I mixed this batch on Tuesday evening.  The picture below shows what it looked like on Wednesday morning just before I punched it down for the first time. 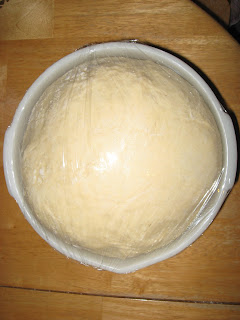 Of course, you could make all of the dough into whatever kind of roll you want and bake it all at once, but that would be a LOT of rolls, and really, the beauty of this recipe is that you can have so much flexibility and variety.  Here is what I did with this batch:

On Wednesday evening, I made cinnamon rolls.  Usually, I open the door of the warming oven on the Margin Gem, spread an old towel on it, and let loaves of bread and pans of rolls rise there.  I don't close the warming oven door because it gets too hot for the dough.

However, because this dough is so cold after having been in the refrigerator, the closed warming oven is the perfect place to put these rolls to rise.  I put a hot pad on the floor of the warming oven and place the pan of rolls on that so that the pan is not conducting too much heat, though. 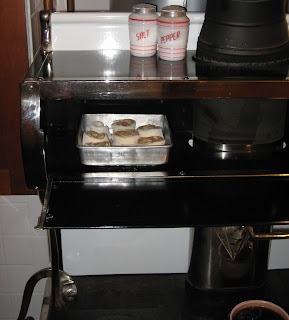 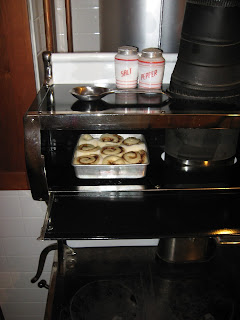 I baked these rolls in a moderate oven for about 20 minutes.  Remember, baking times are relative in a wood cookstove. 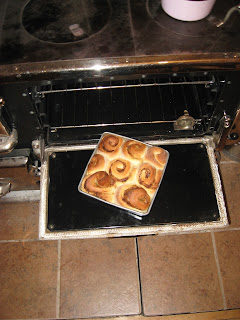 Now, because I had used a shiny pan, I knew that the bottom of the rolls would not be done enough, so I placed them on the middle of the cooktop for a few minutes. 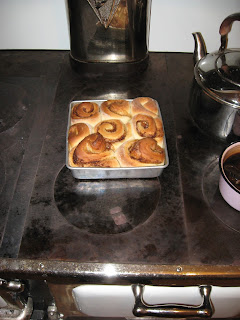 That did the trick, and they were perfect.  After turning them out of the pan onto a rack to cool, I returned them to the pan and frosted them. 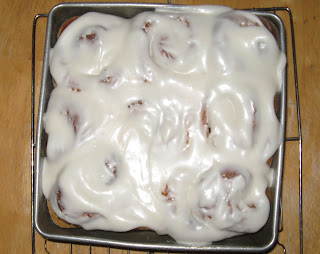 As I said in the previous post, I love frosting, but I have to tell you that I put too much frosting on these rolls.  This recipe makes a really rich dough, so I should have been more sparing.  When I ate these, I had to scrape some of the frosting off, and I NEVER do that!

On Thursday evening, I made plain dinner rolls to go with our roast beef supper. 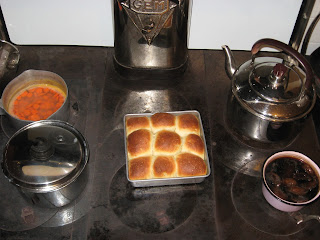 Then, this morning, Nancy and I made the last of the dough into cinnamon twists. 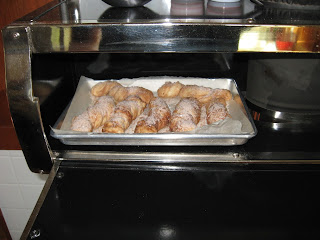 This was the first time I had ever made cinnamon twists.  I talked to Janet L., who was a school cook when Nancy and I were still eating school lunch, and asked her how they made the delicious from-scratch cinnamon twists that we used to eat.  She told me to simply roll small pieces of dough between my hands like little kids do with Play-Doh to make "snakes."  Dip them into melted butter, then a cinnamon-sugar mixture.  Twist a few times and put them on the pan to rise.  It worked like a charm. 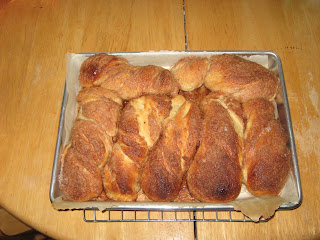 These were plenty large, so I'll try to make them smaller next time, but they were a big hit.

I'm going to continue to experiment with different kinds and shapes of these rolls, and I will continue to add pictures to this post to show the many possibilities that this recipe has.  I'm thinking that it would be very easy to coat them with some herbs and parmesan to make savory rolls, for example.  What would be your suggestions?  Let me know in the comments section below.
Posted by Jim at 9:06 PM