Making Waffles on a Woodburning Cookstove 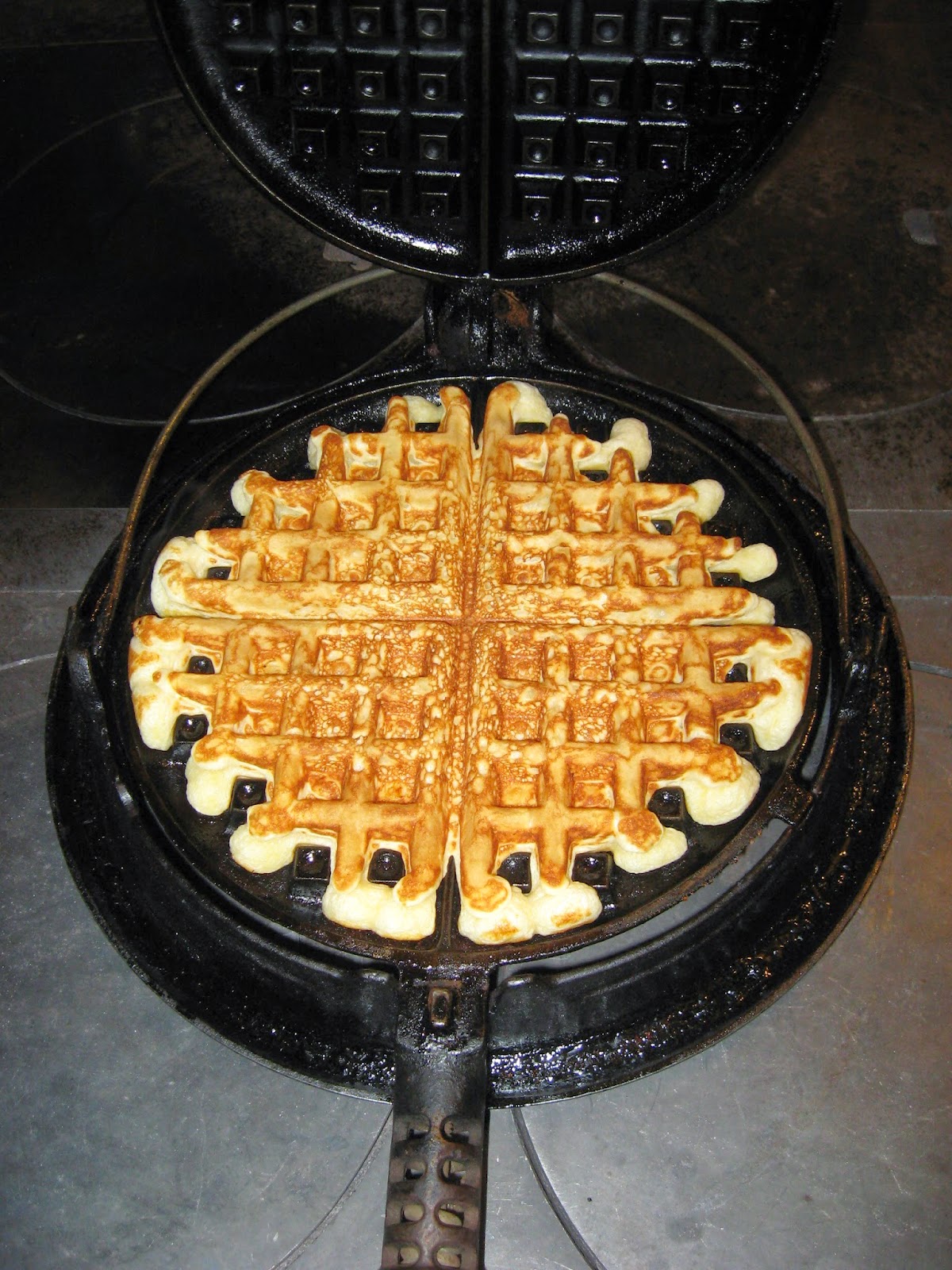 Nancy and I both enjoy a good waffle, and I enjoy waffles made from scratch a whole lot better than those made from a mix.  I still have and use the first electric waffle iron that my mother's side of the family owned.  It belonged to my great-great grandparents and then made it to my aunt Meme's possession.  It is a unique (and a bit scary) looking contraption, but it still turns out a good waffle.  I also have a 1950s waffle iron that I bought on a household auction several years ago, which makes waffles which are in the shape of a half oval.

Several Christmases ago, my sister and sister-in-law got into cahoots and purchased me a new Belgian waffle iron.  At the time, my wife was a bit dubious about this purchase because she knew that I was not about to give up my antique waffle irons, but I really like this new Belgian waffle iron, too.  It is constructed so that you pour the waffle batter in one side, shut it, and then flip it so that the waffle that you just poured is now baking upside down.  It makes a great waffle and is fun to use.

Now, of course, these waffle irons are all very well and good, but they are all electric, and I obviously like to have non-electric options when it comes to cooking.  Thus, I purchased an antique stovetop waffle iron several years ago when I was in college.  I tried it out on the Qualified range a few times, but I could never get it to work right.  The problem that I had was that no matter what I did, the waffle would be undercooked between the pegs.  Finally, after several failures, I examined the waffle iron more closely and noticed that the pegs seemed to be farther apart on this waffle iron than on others.  I sold that waffle iron and began the hunt for a replacement with pegs which were a more standard distance apart.

I finally found one at Carstens Farm Days in September of this year, but it wasn't until last month that I finally was able to take the time to re-season it and begin experimenting.  I'm pleased to report that a successful waffle was no real trouble once I got the hang of things.

The first thing that one must do to bake a waffle on a woodburning cookstove is to build a hot fire.  I find that the fire has to be very hot.  Below, you can see a picture of one of the blazing fires that I used to make waffles. 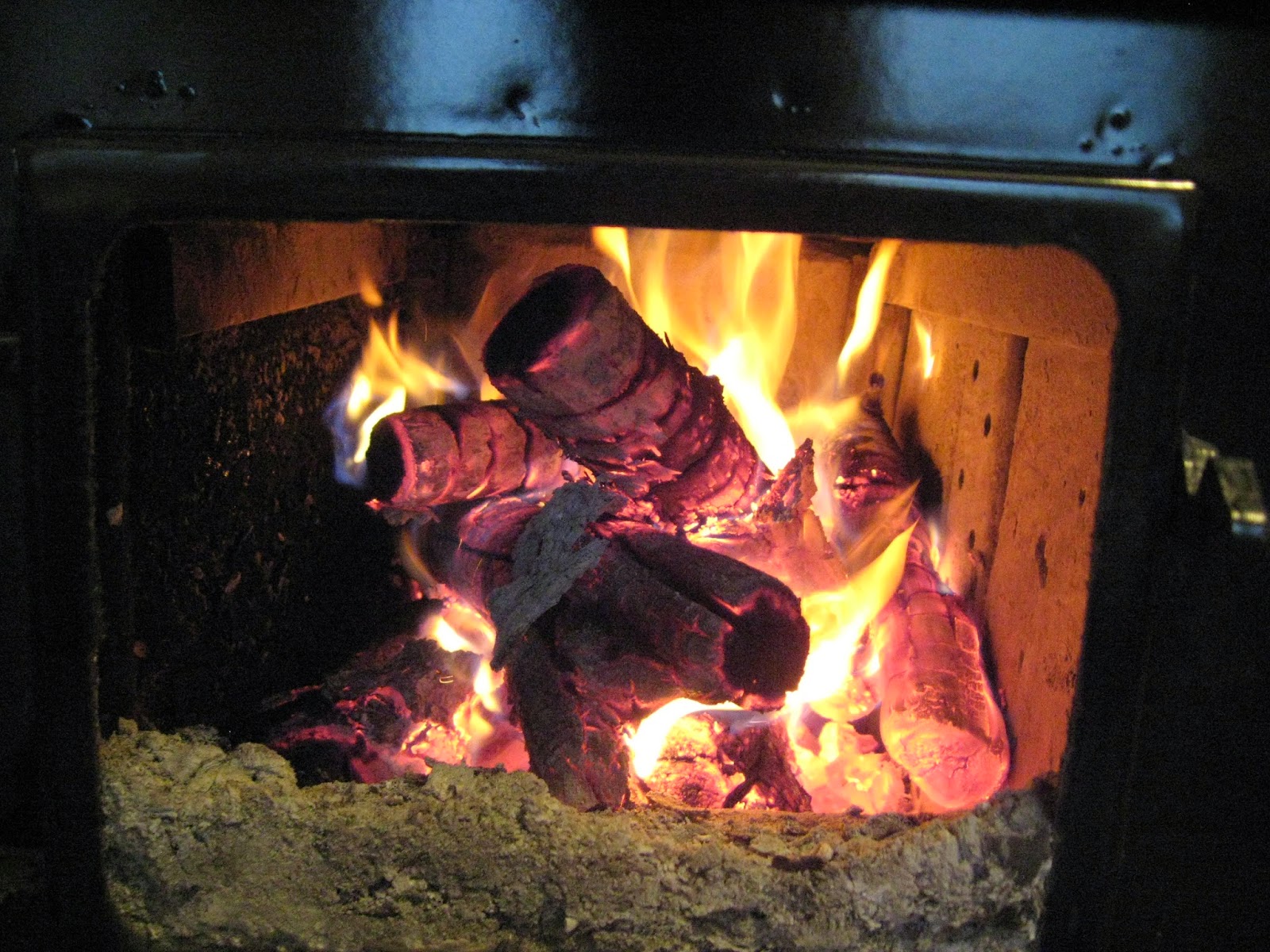 You can see that I like to use small pieces of wood in order to make a really hot fire.  I find that doing so affords more control.  This is perhaps a bit difficult to explain, but here goes.  When you build a hot fire with large logs or split pieces, it takes a long time to reach the fire's peak heat; furthermore, you don't have much control over the temperature at that point until the wood burns down quite a bit.  When using small pieces to create a very hot fire, you can increase the heat by adding even more small pieces.  If you get the fire too hot, though, it won't take as long for the small pieces to burn away and thus cool the fire.

Notice also in the above picture that in the middle of the right-hand wall of the firebox is a perforated metal bar that extends vertically from below the grate.  These are part of the Margin Gem's air-jet re-burn design.  The reason that I mention these is because the air-jets on the middle right side of the firebox are the ones that seem to get the most air--and consequently create the most heat--so the hottest part of the Margin Gem's cooktop is usually in the area indicated by the red circle in the photograph below. 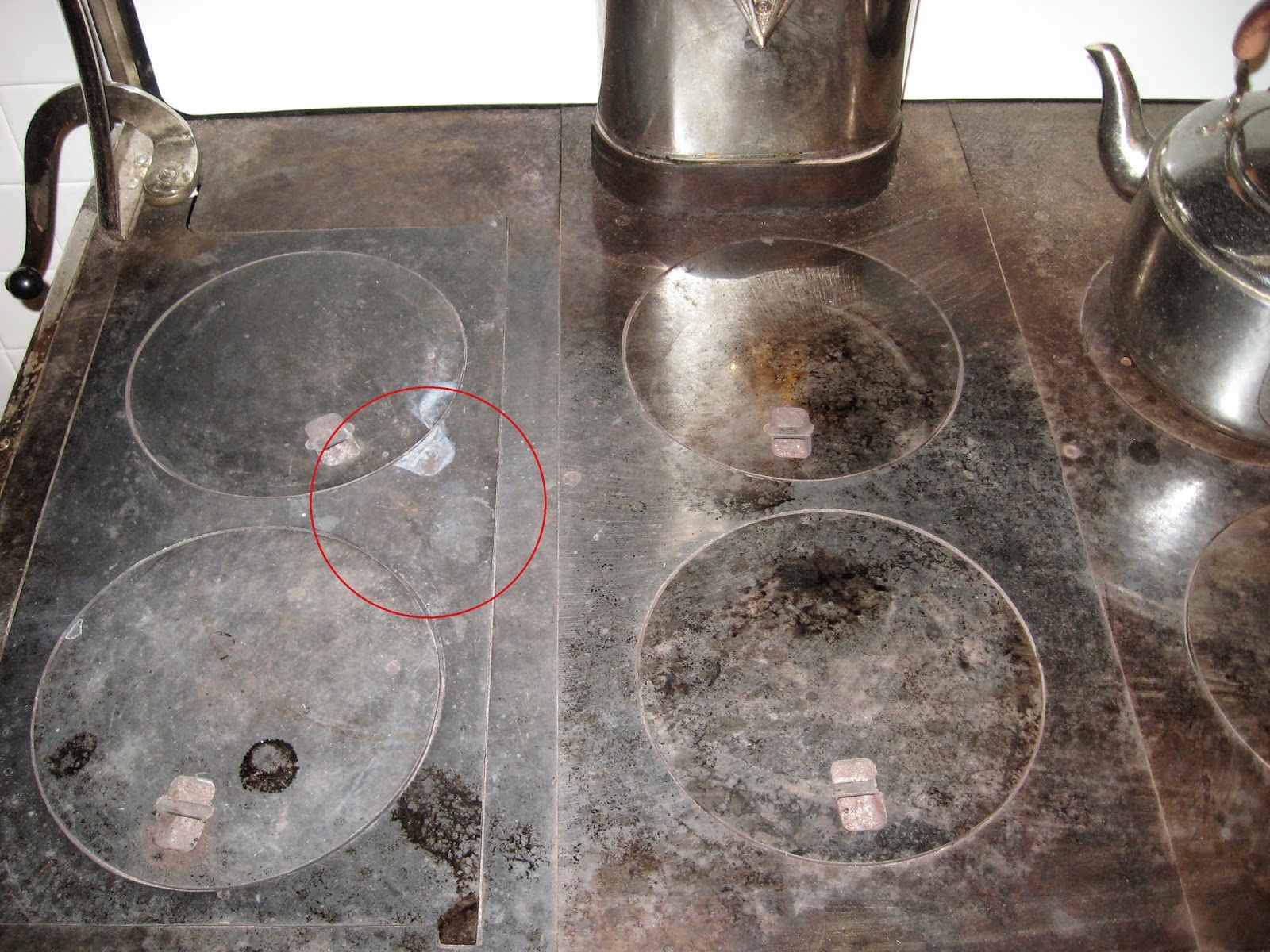 I usually place the waffle iron there, as seen in the picture below.

I also have had success removing a stove lid over the fire, putting the waffle iron over an open "eye" above the firebox like so.

Each placement of the waffle iron has its advantages and disadvantages.  In the case of putting the waffle iron on the closed cooktop, it heats more evenly because cold room air is not rushing through the gap between the irons and their base to get to the fire.  However, if you fill the waffle iron too full, the batter will run out onto the cooktop and burn there, creating pretty acrid smoke.  Also, you have to lift the irons to turn them.

If you put the waffle iron over an open eye above the fire, the edges of the waffle do not brown as nicely as the center because of the air rushing by, but any extra batter that jumps out of the waffle iron merely lands in the fire, and the smoke which results is just carried out the chimney.  If the eye of your stove is large enough, you can simply rotate the irons without lifting them, since the edge makes an arc below the surface of the cooktop.

Anyway, once you put the waffle iron on to heat its first side, you need to start mixing your waffle batter.

The waffle recipe that I like to use belonged to my great-grandma Ruth.  I've mentioned her here on the blog before.  When I was home on Christmas break from Iowa State University some twenty years ago, I decided to copy all of the recipes from my mom's and grandmothers' boxes that I figured I would want.  I didn't copy many recipes from Granny, my dad's mother, because she was very much a by-guess-and-by-golly cook--and, by golly, she was a good cook when she wasn't trying to substitute for ingredients that she didn't have.

Grandma Marian, my mom's mother, was a much more precise cook in her day, and she had two boxes worth of recipes for me to look over.  After I picked out the recipes that I wanted, she volunteered to copy them for me, and to tell the truth, that was one of the most meaningful things she could have ever done for me because they are in her handwriting and because she took the time to leave little notes on many of the recipes for me.  Some of the recipes have extra directions or advice, some have opinions, and some have memories attached.  On one recipe, she wrote "This is from the days when we milked," meaning that it was a recipe that was used when every Iowa farm still had at least one dairy cow.

Well, the 21st of this month will mark the fourteenth year that I have kept a dairy cow of my own, and so I feel that I have some understanding of how ample milk and cream can affect one's cooking.  Grandma Ruth's waffle recipe is one such recipe. 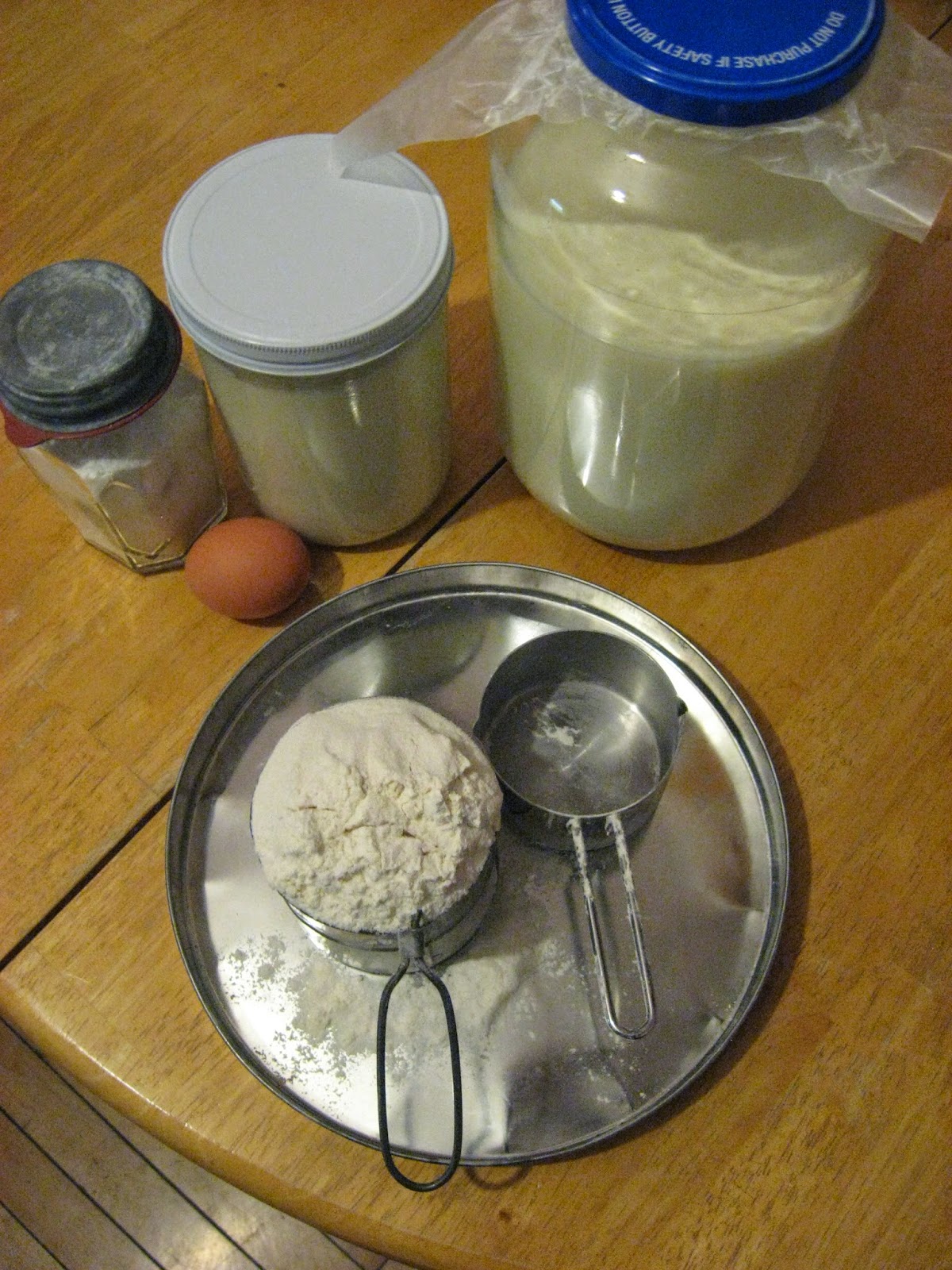 Here is what you need:

Note that the cream is the only fat in the recipe.

Put all of these ingredients into a small mixing bowl (I prefer to use my 8-cup Pyrex measuring cup as a batter bowl because of its handy pouring spout).  Whisk until smooth, but try not to beat.  Depending on the size of your egg and the thickness of your cream, you may need to add a little more flour.  I usually just put in a sprinkle of salt from the range shaker rather than a whole half teaspoon, and I scant the baking powder by at least a teaspoon too, but you can do what you want to. 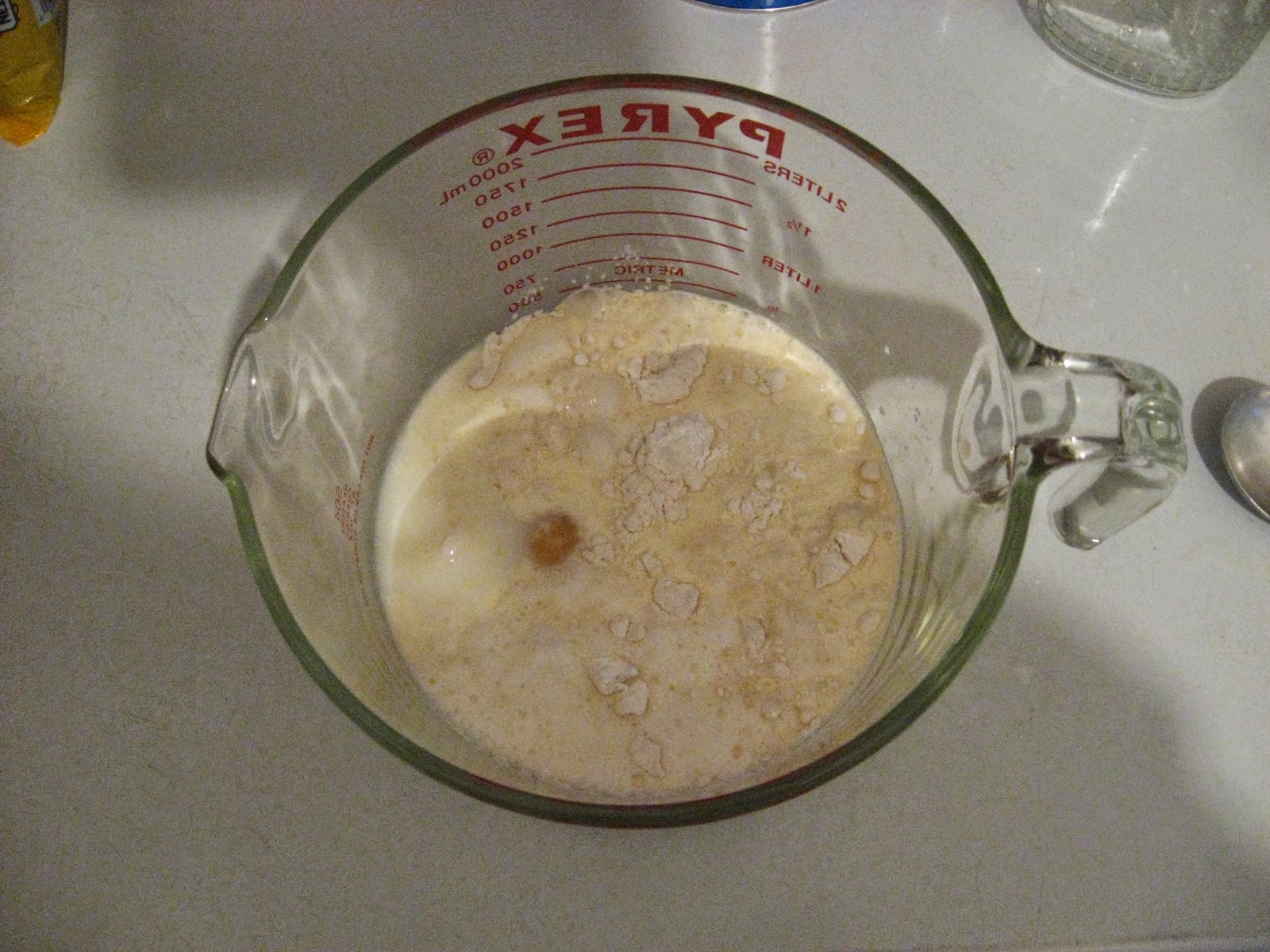 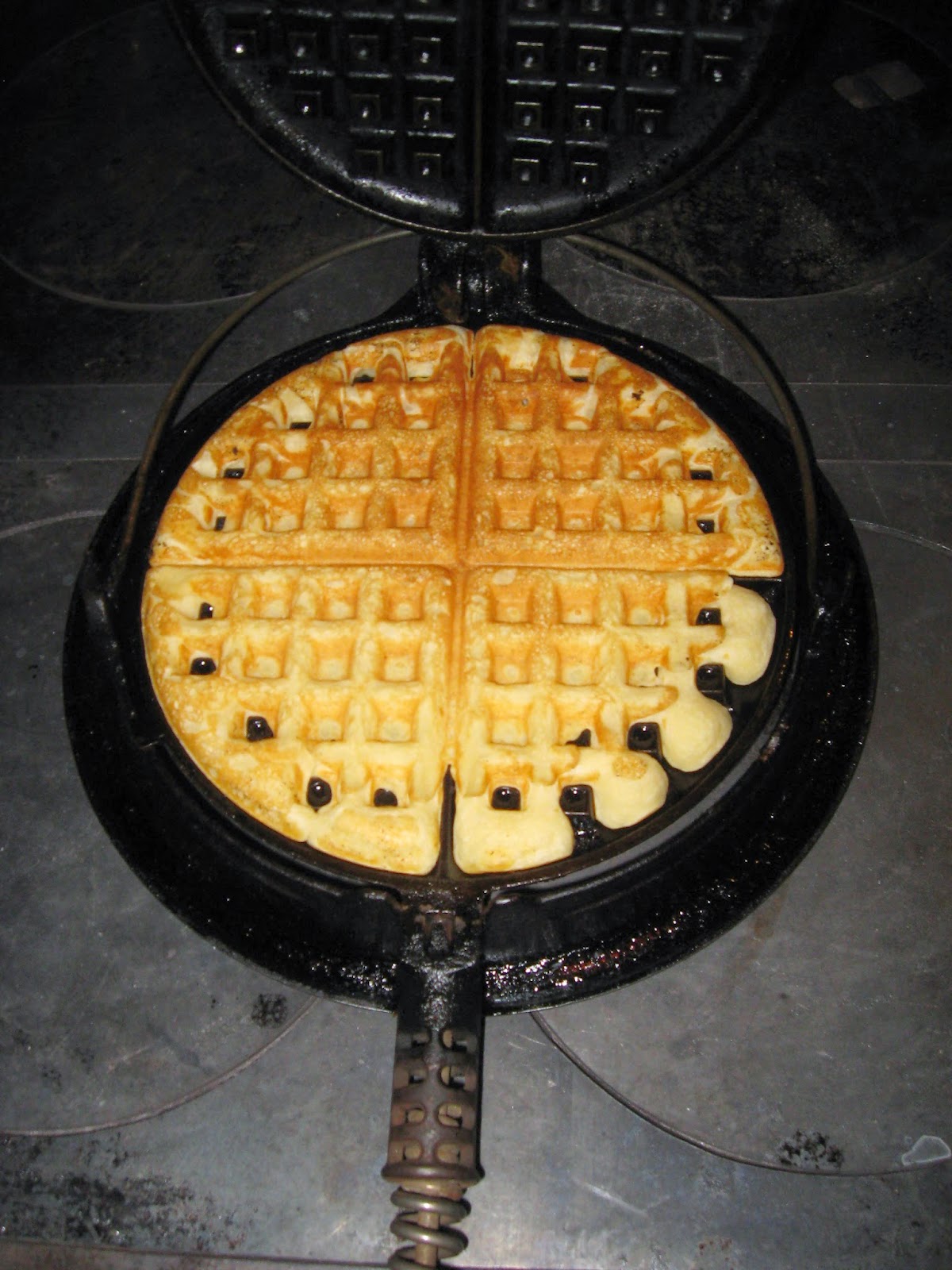 To bake the next waffle, I spray the waffle iron again, pour in the batter, and then immediately turn the iron again.

These waffles served with our homemade syrup are wonderful, and I'm glad that in the event of a power outage, we'll still be able to have them on the menu.