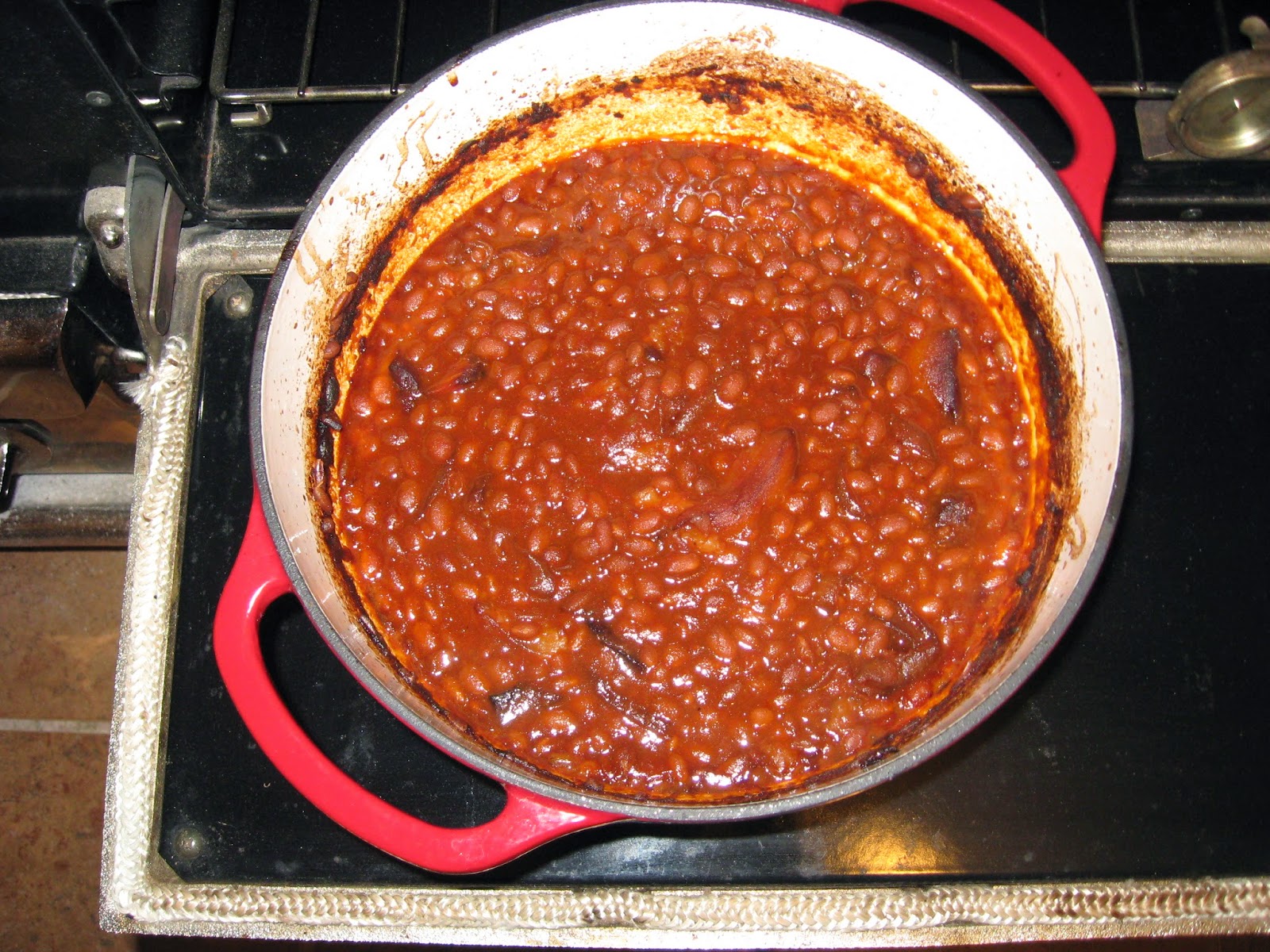 Due to poor weather conditions, Nancy and I were able to spend the whole day at home yesterday and today.  Neither of us even crossed the road to get the mail yesterday.  These are my favorite days!

I took advantage of the day at home yesterday by embarking on a new adventure: making from-scratch baked beans.  I love Van Camp's pork and beans (doctored up, of course), so I've never tried baking beans from scratch before.  However, after having read several recipes for baked beans in old cookbooks, I decided that I wanted to try it.  Homemade baked beans have a total cooking time of about ten hours, so they are a dish that is well suited to the woodburning cookstove.

I started by re-reading several recipes.  I first looked at the 1907 Malleable Range cookbook.  This was an antique store find several years ago. 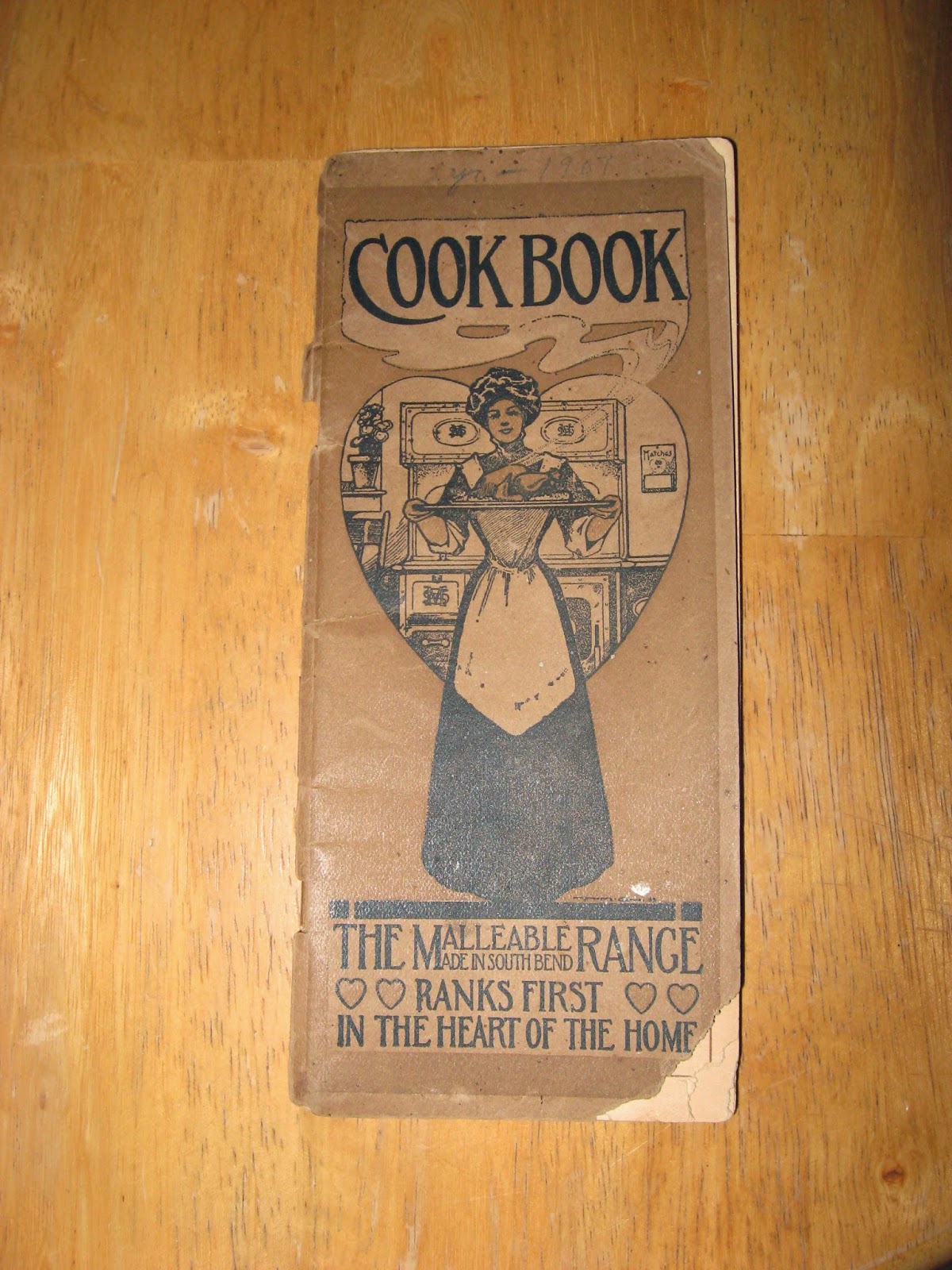 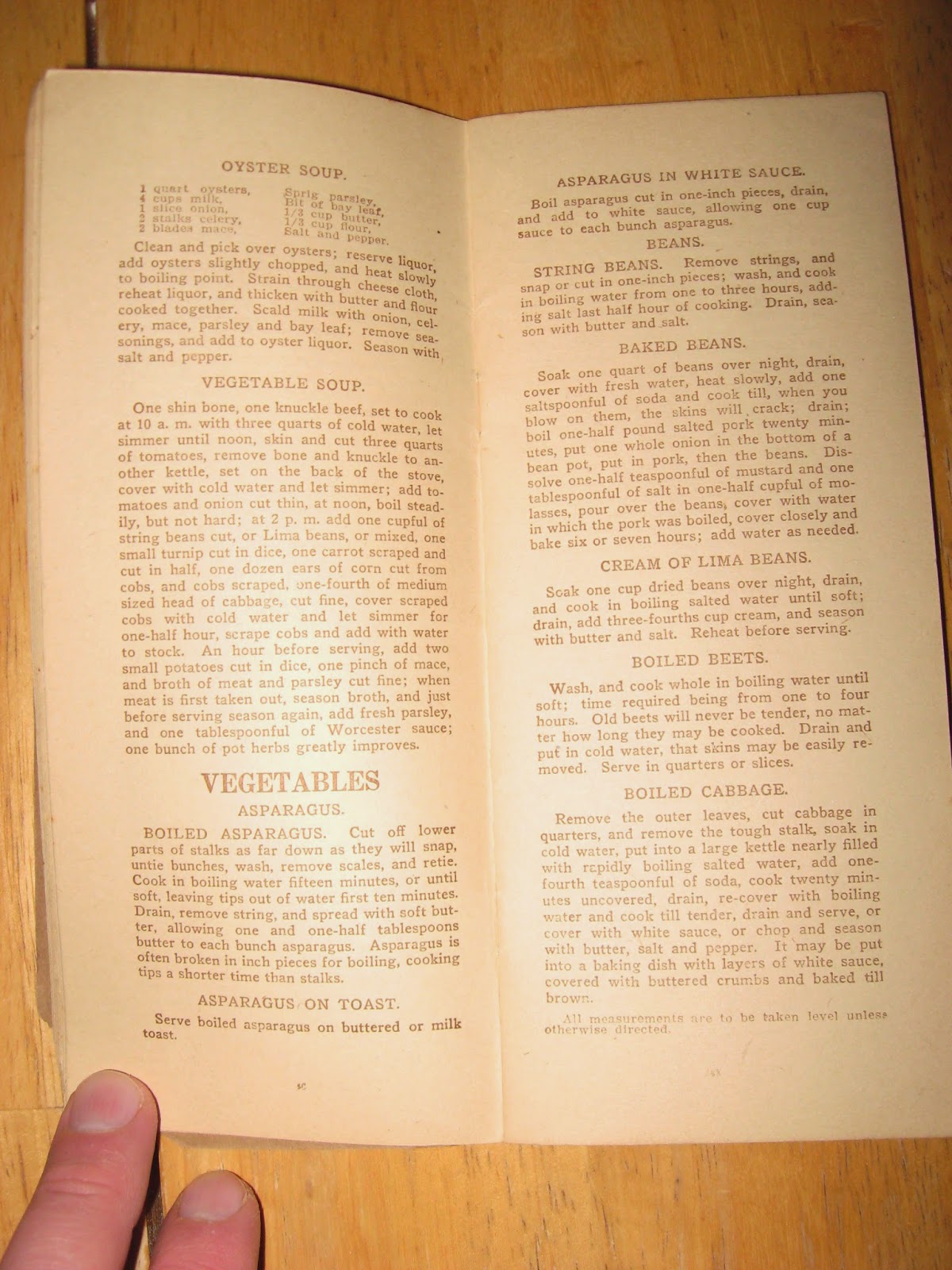 The recipe for baked beans in this cook book reads as follows:


Baked Beans
Soak one quart of beans over night, drain, cover with fresh water, heat slowly, add one saltspoonful of soda and cook till, when you blow on them, the skins will crack; drain; boil one-half pound salted pork twent minutes, put one whole onion in the bottom of a bean pot, put in pork, then the beans.  Dissolve one-half teaspoonful of mustard and one tablespoonful of salt in one-half cupful of molasses, pour over the beans, cover with water in which the pork was boiled, cover closely and bake six or seven hours; add water as needed.

I then looked at the Majestic Cook Book.  This was a recent purchase on eBay, where the seller had advertised it as having come from the 1920s.  Judging from both the pictures of the ranges and the ladies' fashions exhibited in the cookbook, it is a good decade older than that.  ﻿ 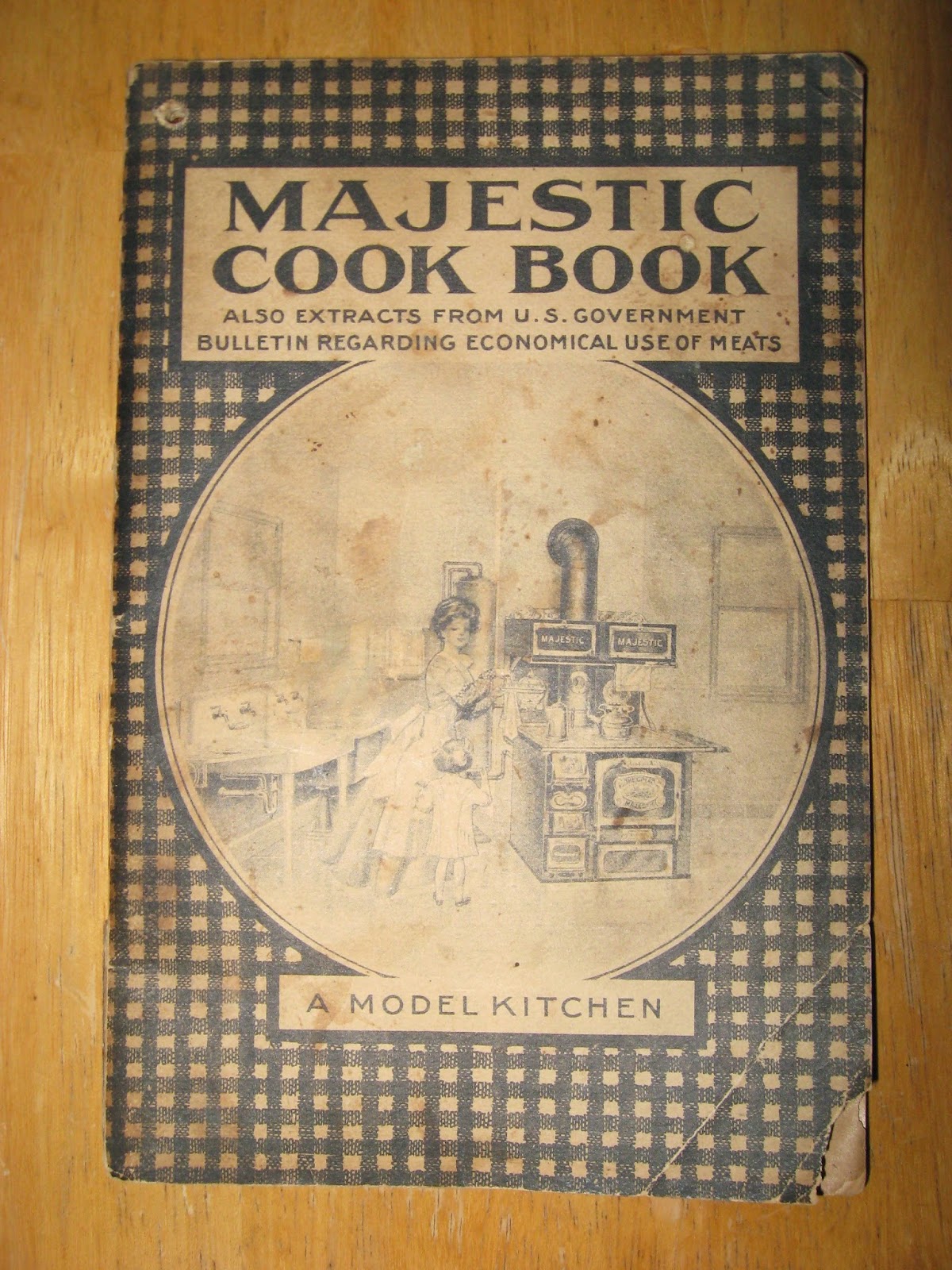 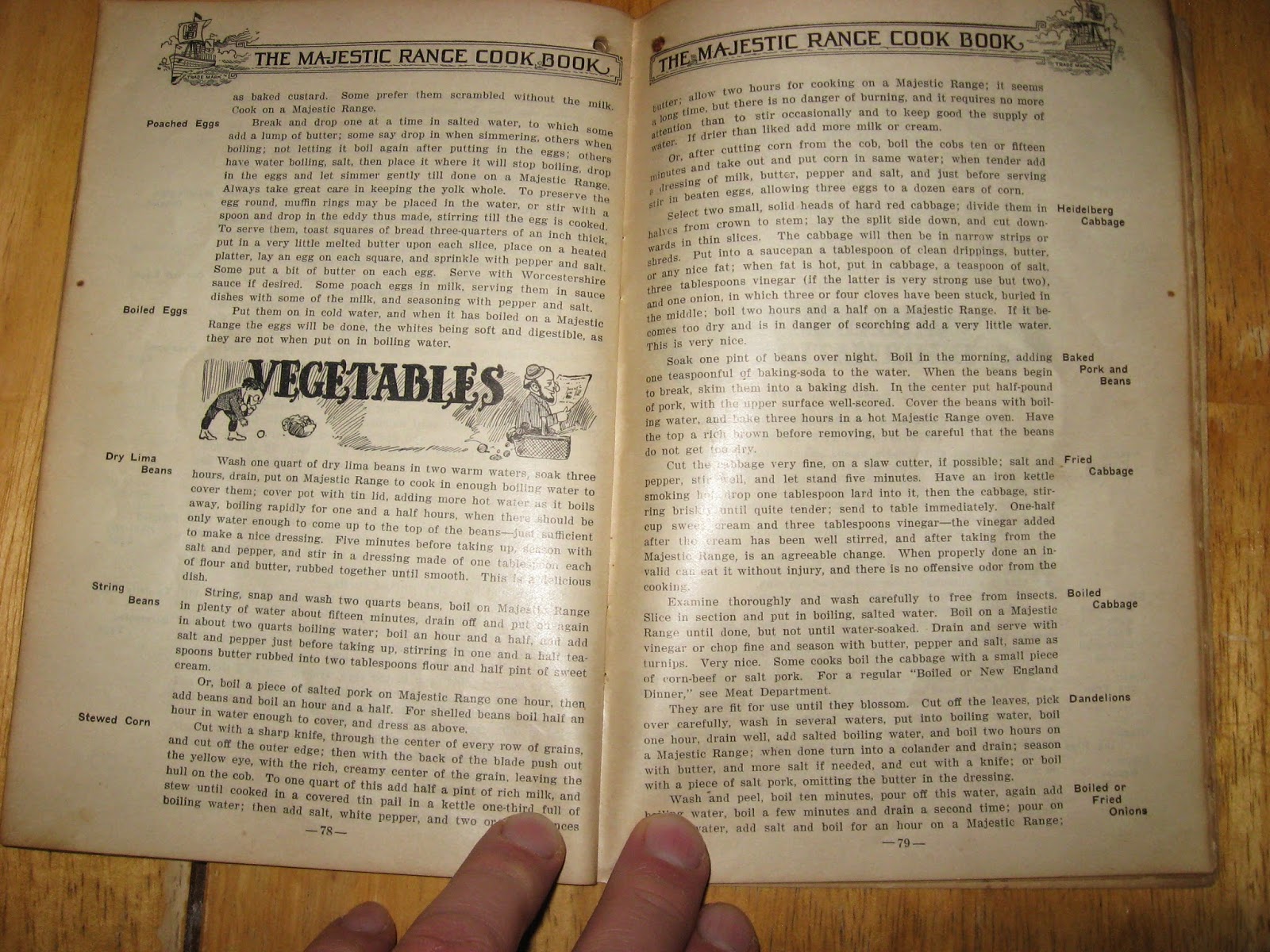 Page 79 of this book has a recipe for "Baked Pork and Beans."


Soak one pint of beans over night.  Boil in the morning, adding one teaspoonful of baking-soda to the water.  When the beans begin to break, skim them into a baking dish.  In the center put half-pound or pork, with the upper surface well-scored.  Cover the beans with boiling water, and bake three hours in a hot Majestic Range oven.  Have the top a rich brown before removing, but be careful that the beans do not get too dry.

Next, I looked at the Sunshine Cook Book that blog reader Gary sent me a little over a year ago.  You can see his Ideal Sunshine range here. 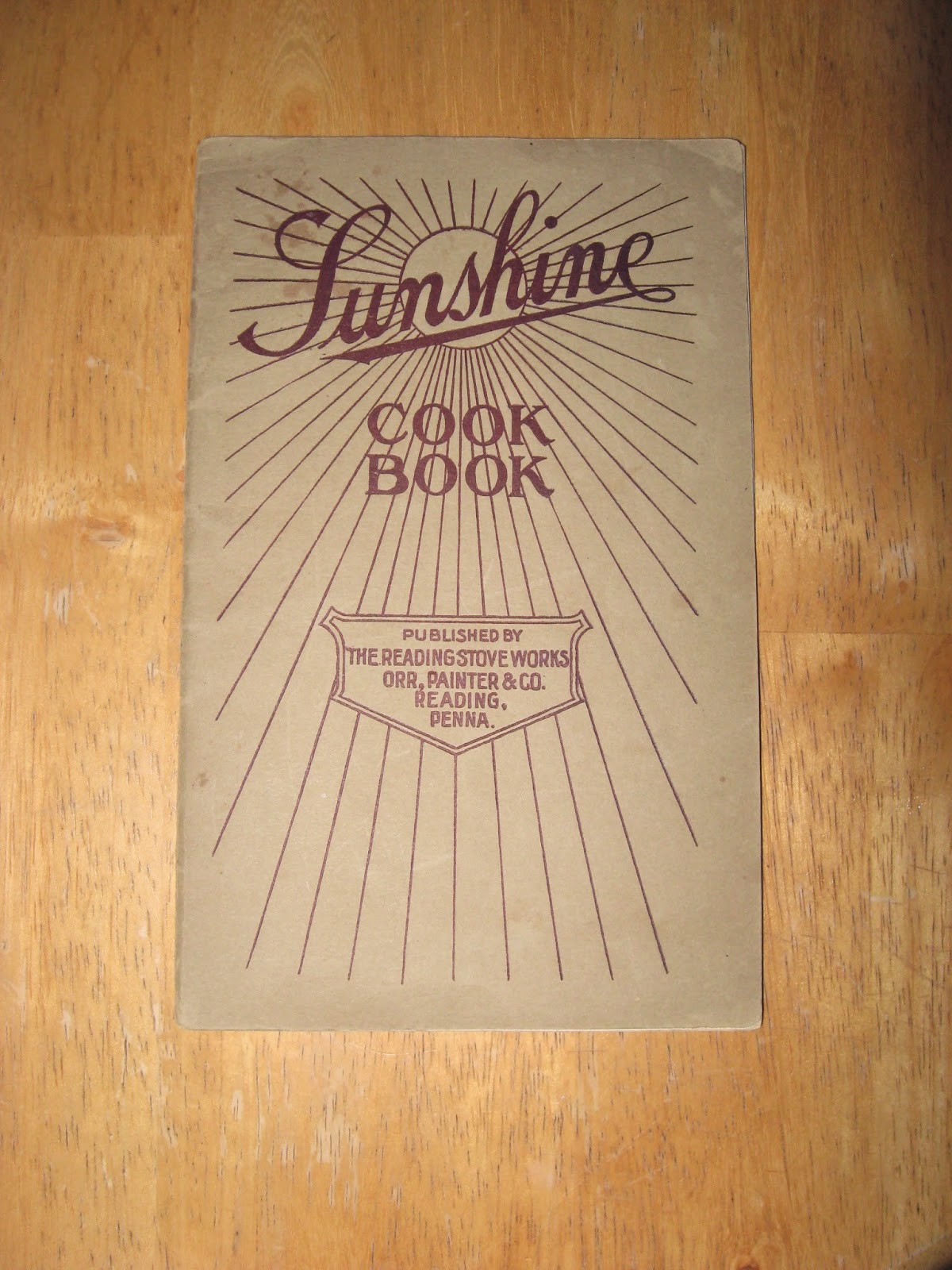 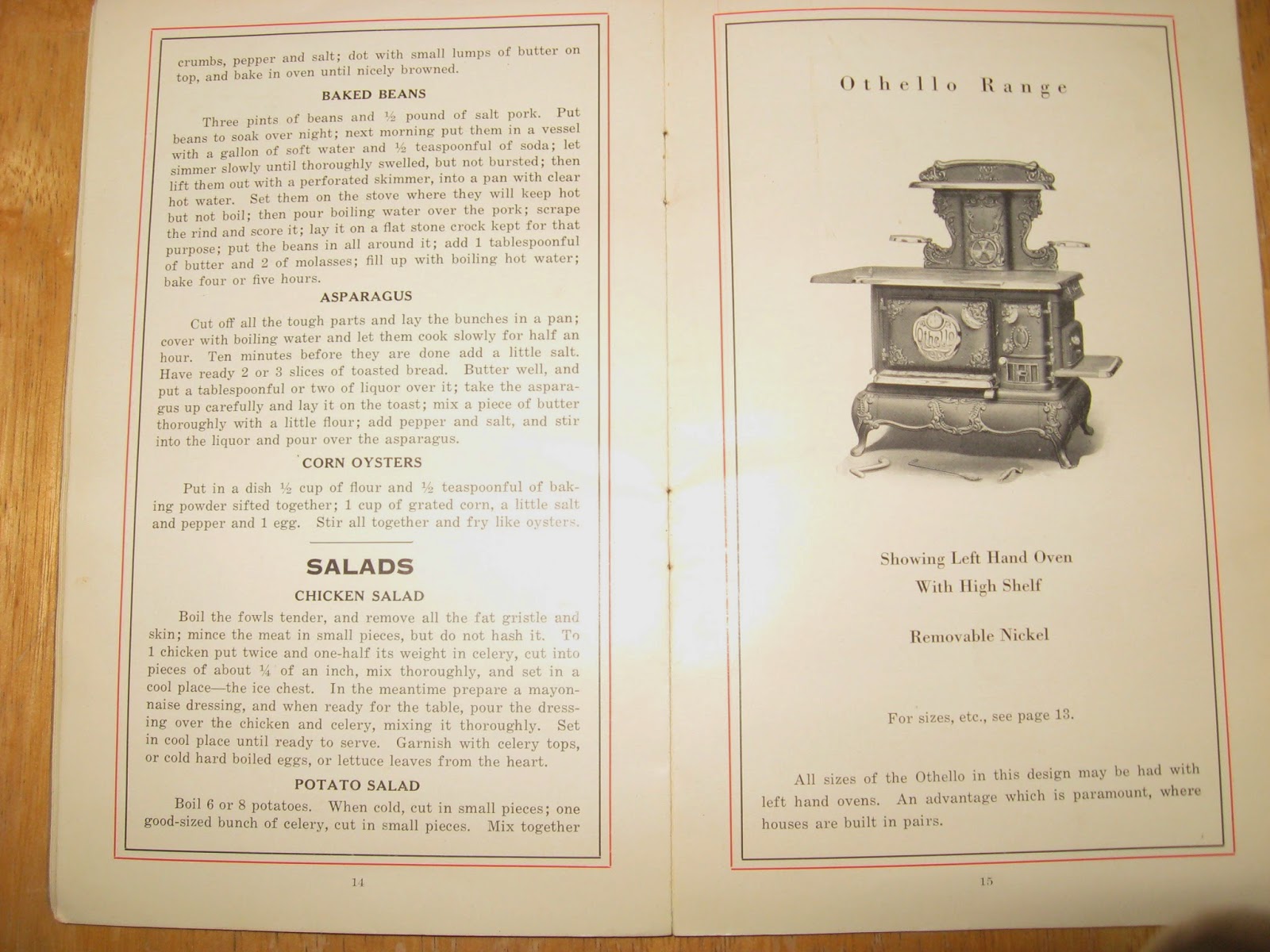 ﻿
The recipe for "Baked Beans" appears on page 14 of this nifty little book.  It reads as follows:
Three pints of beans and 1/2 pound of salt pork.  Put beans to soak over night; next morning put them in a vessel with a gallon of soft water and 1/2 teaspoonful of soda; let simmer slowly until thoroughly swelled, but not bursted [sic]; then lift them out with a perforated skimmer, into a pan with clear hot water.  Set them on the stove where they will keep hot but not boil; then pour boiling water over the pork; scrape the rind and score it; lay it on a flat stone crock kept for that purpose; put the beans in all around it; add 1 tablespoonful of butter and 2 of molasses; fill up with boiling hot water; bake four or five hours.

My reprint of the 1933 Home Comfort cook book, available online at Lehman's Hardware here, has three recipes for baked beans.  The one that I enjoyed reading the most was a poem:

"Take beans not too old, and without imperfection,
Immerse in cold water to stand through a night;
Then boil in a moderate way, 'till inspection
Shall find them in touch and taste tender and right.
Now transfer for baking, your condiments adding--
﻿
Don't leave out the pork!  Such omission were strange--
And last, to conclude the important proceeding,
Let them bake slow and sure in a "Home Comfort" Range.

I remembered that I had seen an old recipe for baked beans in a cookbook that I believe that we received from Nancy's grandma. 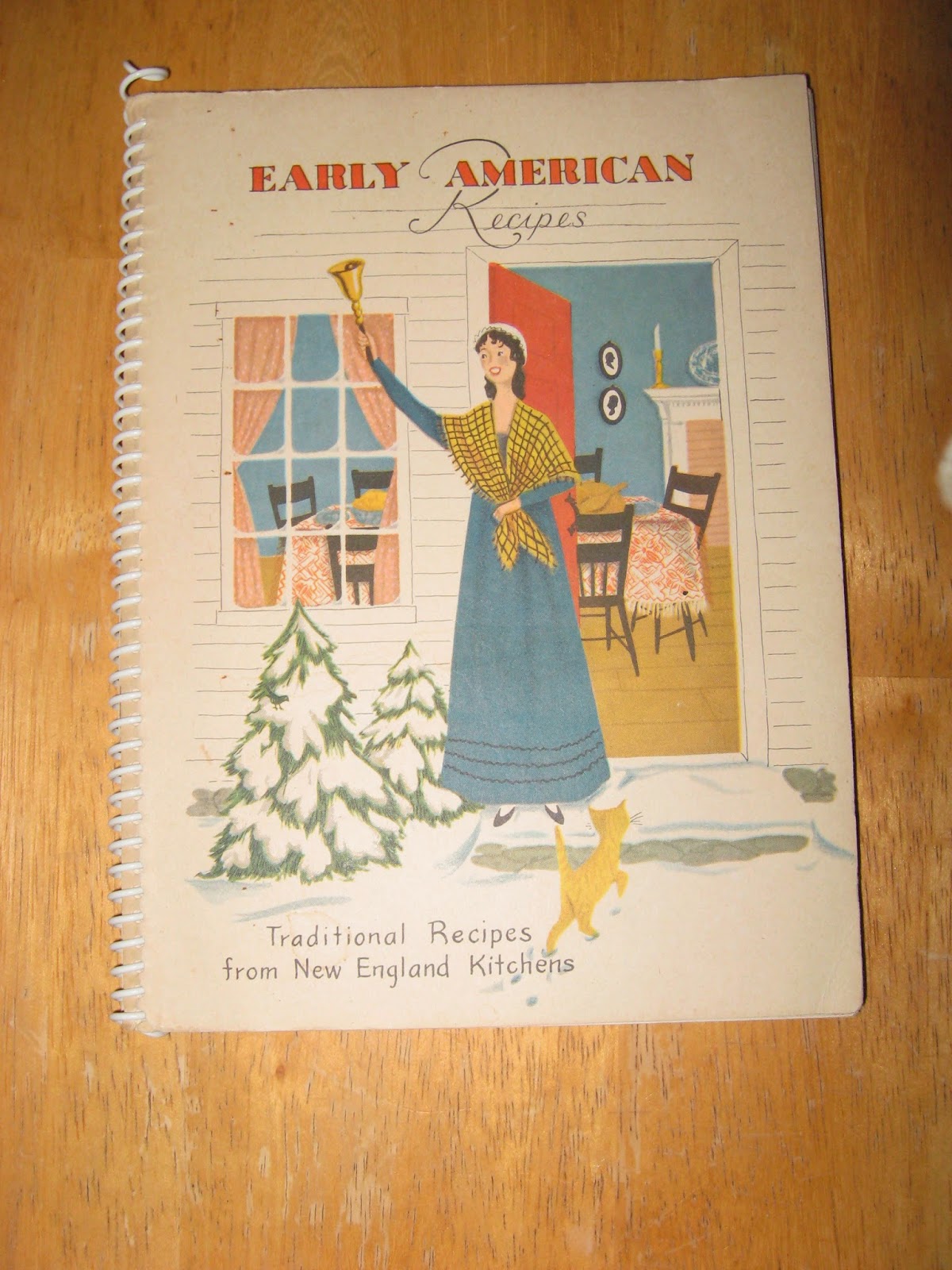 Entitled Early American Recipes, this cookbook was published in 1953.  The bottom of the cover page says "Traditional Recipes from New England Kitchens," and the recipes certainly do reflect the flavors of that geographic area. 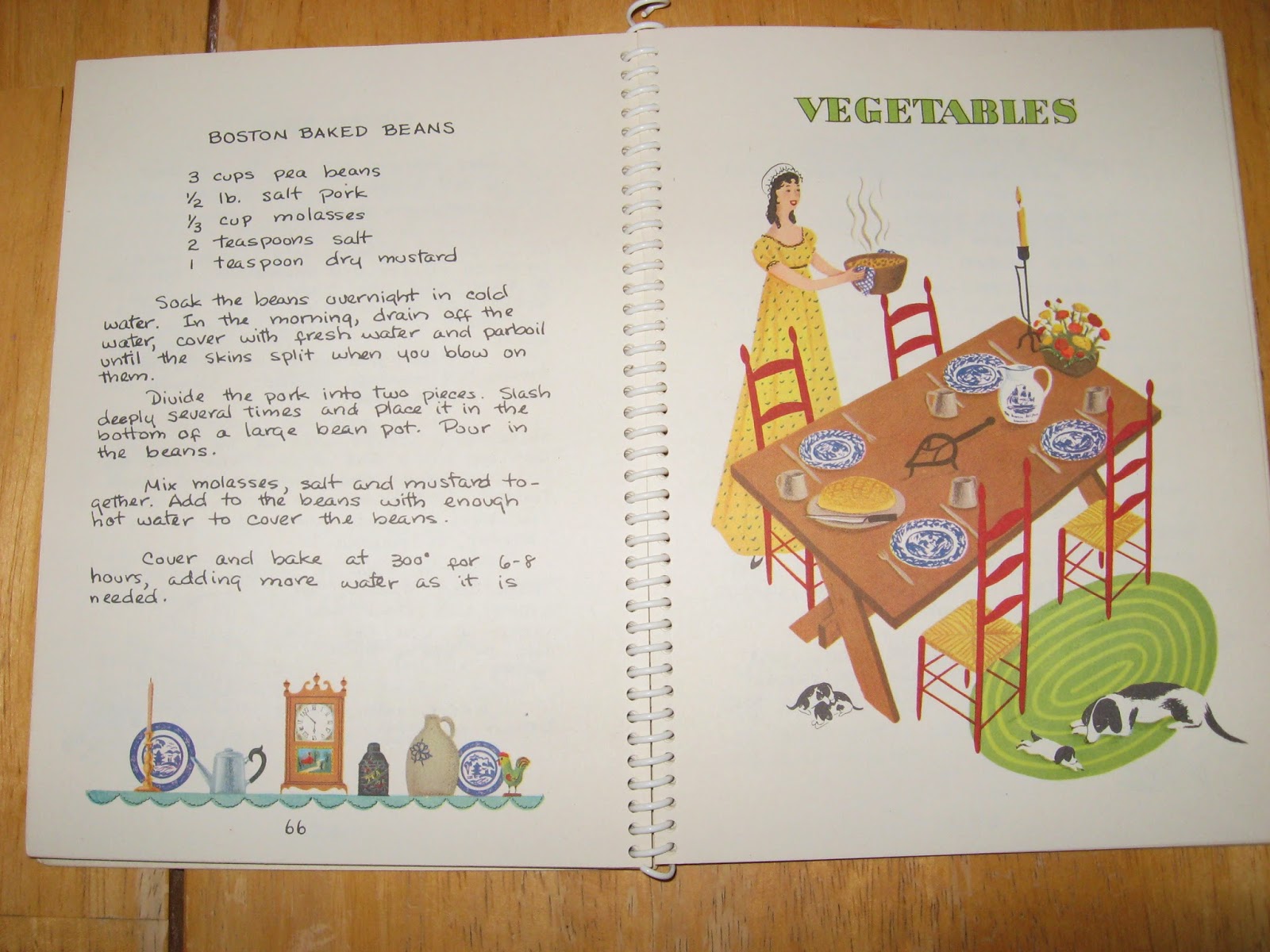 I think you can read the recipe from this cookbook if you click on the picture to enlarge it.  It's basically the same as the others. 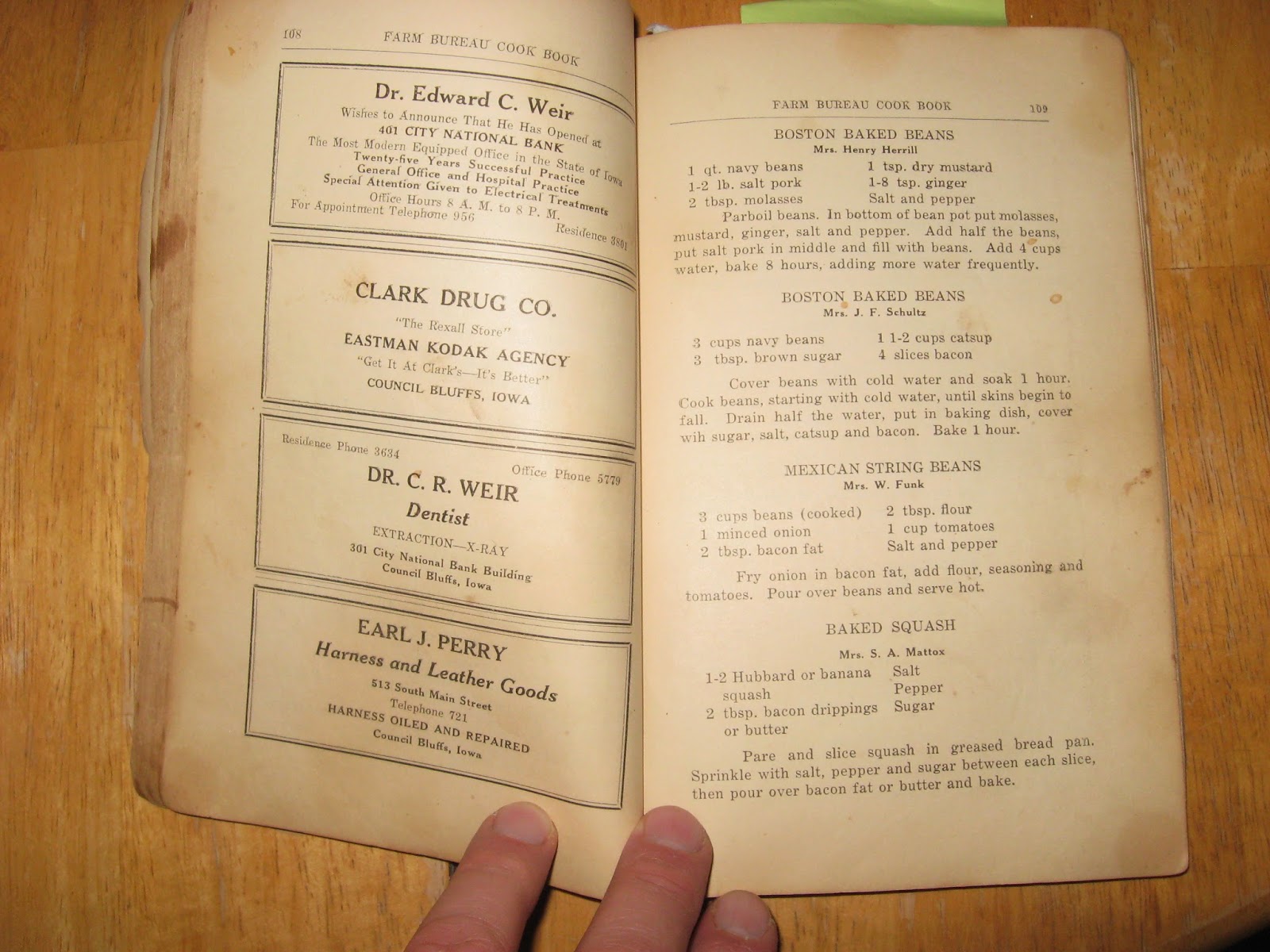 On page 109, two recipes for Boston Baked Beans appear.  The first one from Mrs. Henry Herrill reads as follows:

For good measure, I consulted my trusty Kitchen Klatter cookbook too.  It pretty much fell in line with everything that I have documented here.﻿
﻿
Thus armed with information, I set out on my adventure.  The first thing that I discovered was that one pound of navy beans is equal to three cups.  I washed the beans and sorted through them to pick out any undesirable ones.  I covered them with water and soaked them overnight.

In the morning, I put them on to boil in the water in which they had soaked.  When they needed some more water, I put a quart of home-canned tomato juice which had been a by-product of making homemade Heinz ketchup.  After a couple of hours of gentle boiling, the skins did indeed break when I blew on them.  I put them into my Lodge enameled cast iron soup kettle.  I added some molasses, some brown sugar, a little dry mustard, a dash of ginger, two slices of onion, and a piece of salt pork.  I stirred it all together and put it into a slow oven where it stayed for the next six hours.  I had to add water a couple of times and stir it.  Toward the end of the cooking time, I added some homemade ketchup too.
I had thought that these beans were going to be a good winter cookstove recipe because of their long cooking time.  However, it was a bit chilly here yesterday, so having only a low fire in the stove in order to keep just a slow oven going, as well as having the oven door closed all day, made it so that we didn't get to enjoy as much heat from the cookstove as we might have.  This leads me to believe that baking beans might be a better fall or spring dish.

The results of my first baked-beans-from-scratch experiment were good.  They didn't get to bake for the full eight hours, which I think would have been good, because they were still a bit too firm for my taste.  I still prefer Van Camp's, but I think that I will try to experiment some more and see if I can get closer to what I have in mind.  The beans, with a slice of fresh-baked brown bread, an orange, and a glass of milk from our own cow made my supper last night.﻿ 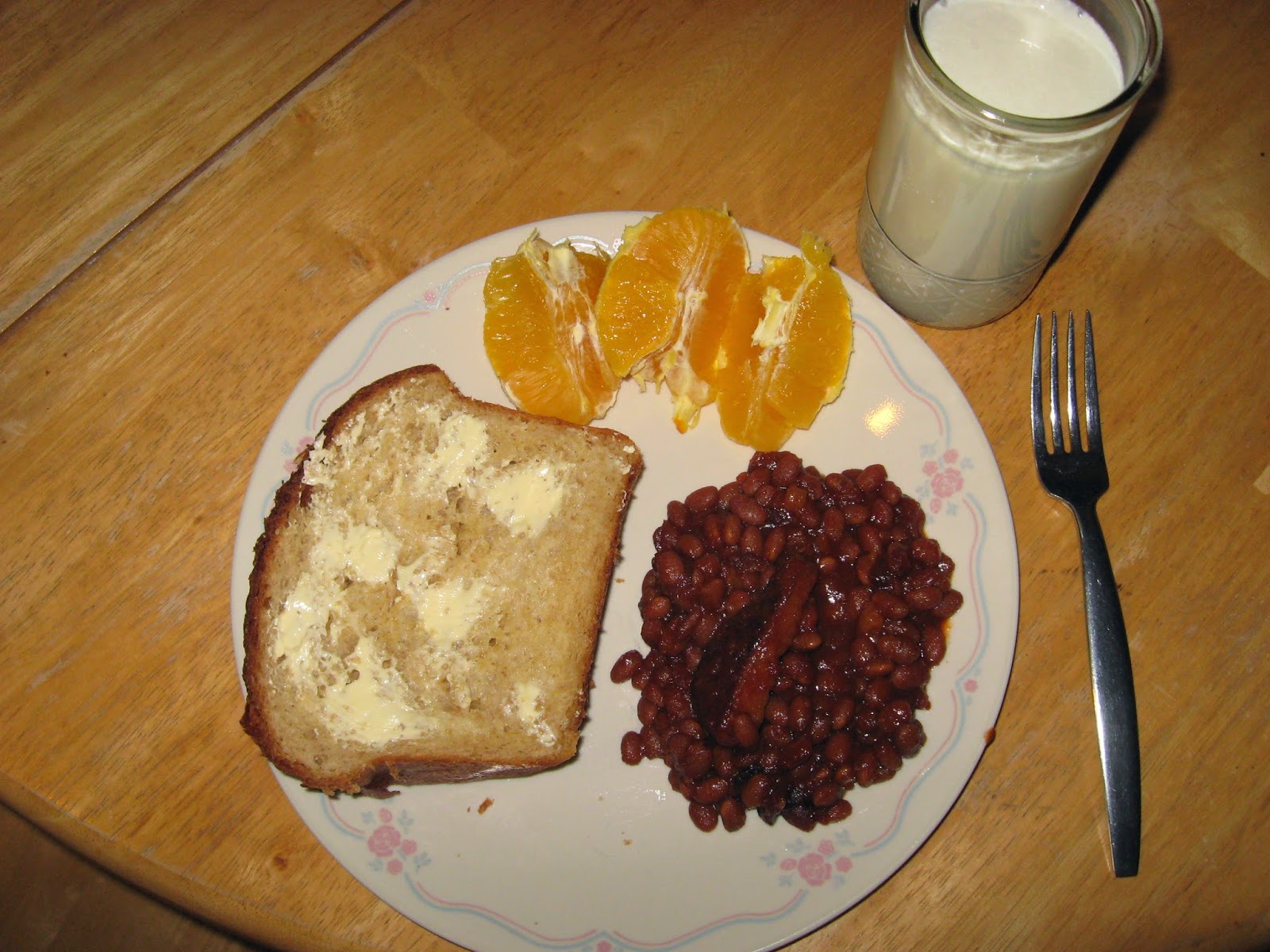 If you have a recipe for homemade baked beans that you favor, please feel free to share it in the comments section below.  I'd love to see what other people think.
Posted by Jim at 7:45 PM