This post was requested by one of The Ivers Girls.  The Ivers Girls grew up as neighbors to my maternal grandparents, but to call them simply neighbors or family friends doesn't begin to describe the relationship that our two families share.  For well over fifty years, our lives have intertwined in so many ways that I'm not even able to number them all.  Over that half century, many, many recipes have been exchanged between the two families, so when the youngest of The Ivers Girls mentioned to me earlier this fall that she wished she had my grandma Marian's sugar cookie recipe, I was surprised.

"You mean Grandma never gave that to you?" I asked.

"Whenever I asked about it, all Marian would say was that there was 'nothing special in it,'" she responded.

This is very surprising to me because my Grandma was not one to keep any recipe a secret, especially one like this that she used so frequently.  When I was young, these cookies would show up about once per month from October to April.  In October, they were cut in the shapes of pumpkins and leaves and were frosted with orange tinted icing.  Come November, they appeared in the shapes of turkeys with orange or brown frosting.  Of course, in December they were cut in all sorts of Christmas shapes, and the frosting would be white, pink, and pastel green.  (Grandma didn't believe in darkly colored frosting; she said that you shouldn't have to taste the color.)  In late December, Grandma would make another batch and cut them all into bells to "ring in the new year."  These always had white frosting and usually a cinnamon candy for the clapper.  In February, they appeared as pink frosted hearts; in March, green-frosted shamrocks.  Finally, in April dozens of eggs, crosses, and churches would be cut out.

My mother's favorite story about these cookies is from the Christmas season that was most likely my freshman year of high school.  She had just returned to teaching full-time, and we were extremely busy with activities, too.  Mom had mixed a batch of these and put the dough to chill on our enclosed north porch, which often serves as a walk-in cooler in the winter months.  She always covered the mixer bowl with a luncheon plate, making it easy to access.  As we kids walked in and out of the kitchen door, it was too easy to just lift the plate and grab a bite of cookie dough.  None of that batch of dough actually made it to the oven.  While I would feel terribly irresponsible if I recommended eating cookie dough with raw eggs and flour in it, I will admit that this dough is really good!

My grandma actually sold these cookies for a short time in the 1990s, and while most people associate this recipe with her, she got the recipe from her paternal aunt, and she forever referred to them as Auntie Freda's Sour Cream Cookies--hence the title of this post.

So, without further ado, here is the big "secret."  Here are the ingredients:

1 cup sour cream (commercial or country, but not too sour if using country)

And here is the method:


Now, here is the first real "secret" to getting these to turn out like Grandma Marian's.  When you roll these cookies out, you can choose what you like best.  My mom likes to roll them wafer thin because she likes them thin and crispy.  If you want a really thick cookie, these will work for that too.  However, Grandma always rolled them out to about a quarter of an inch, maybe less.
The next secret to getting them just like Grandma's is in the baking.  These need to be baked in a moderate oven, but here again, the length of time they are baked depends on your personal preference.  Mom likes them best when they are brown all over.  They are good that way, too, but just be aware that the flavor is completely different than if you bake them just until the edges begin to show that they are turning a light brown.  Grandma was adamant about this.  I can still see her standing at her wall oven watching these cookies like a hawk.  As soon as the first hint of brownness began to appear at the edges, she whipped them out of the oven.  Depending on the heat of your oven, eight minutes may even be too long for these cookies to bake.
A word to my fellow wood cookstove users about baking cookies in a woodburning cookstove:
Remember that when you are baking cookies, you'll need to build your fire a little hotter than what you ordinarily would for the desired baking temperature.  Basically, if you need a 350ºF oven, build your fire in whatever way would give you a 375ºF oven.  The reason for this is that with cookie baking, you will be opening the oven door far more frequently than you would if you were baking a pie or a cake, for example, and a wood cookstove oven doesn't recover its heat as quickly as a modern one does.
Once the cookies have baked, immediately remove them from the cookie sheet to either a cooling rack for crispier cookies or a paper towel-covered countertop for a softer cookie.  You can tell what my preference is by looking below.

The last and biggest secret to getting these cookies to taste exactly like Grandma's is in the frosting.  She would always just mix up a buttercream icing with powdered sugar, butter, water, and vanilla, BUT she would also add just a hint of almond flavoring--not so much that you would be able to immediately identify it, but enough that you can definitely taste it.  This little dab of almond flavoring really sets these cookies off. 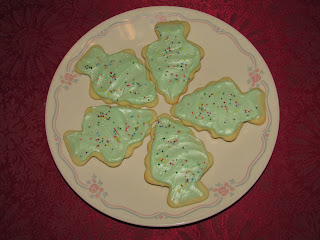 Once the frosting has set enough to handle, pack these cookies into airtight containers, putting waxed paper between the layers to prevent the frosting from gluing them all together.  The frosting will soften the cookies over the next few hours, and the end product is deliciously addictive.

I wish I could give you an estimated yield, but I had put this dough out on the aforementioned north porch and did a poor job of resisting the temptation to snitch from it here and there.  Keep in mind, though, that with 5 1/2 cups of flour, this recipe makes a lot of cookies.  Enjoy!