An Egg Coddling Party around the Wood Cookstove

When my parents were married back in 1971, they were given a pair of egg coddlers for a wedding gift.  I only remember one or two times that Mom and Dad made coddled eggs while the three of us kids were at home, but that is understandable since they only had two egg coddlers.
My brother Kevin and I have taken to buying these little beauties whenever we see them, so between the two of us, we have now amassed enough of a fleet that we could have an egg coddling party. 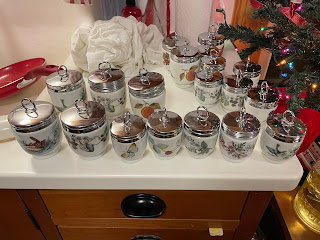 Thus, last night my sister and her family, my brother and his family, my parents, and my aunt all came to our house and we coddled eggs and made Aebleskiver.
In the photo below, I'm beginning to fry Aebleskiver while Janet and Kevin work on preparing the accessories to the coddled eggs.  Mom commented that it was rare to see all three of us working over the same stove, but I think that has only never happened because no other stove besides a woodburning range would be big enough to accommodate all of us.  I will write a whole post about making Aebleskiver later, I promise. 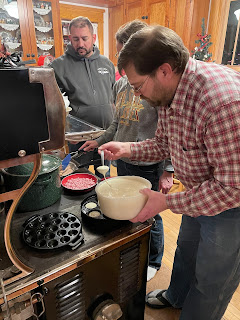 The egg coddlers are little porcelain jars with stainless steel screw-top lids.  They are made by Royal Worcester and come with the following instructions:
"Lightly butter the inside of the cup.  Break egg into it.  Add butter, salt and pepper for flavor.  Screw on lid.  Cook six minutes in enough boiling water to cover coddler.  Lift cup from water by metal ring.  When you unscrew the top, grasp the whole cover.  If the egg is not cooked enough, replace the lid and return the coddler to the boiling water.
For variety, add flaked fish, cheese, herbs, chopped ham, mushrooms, etc. to the egg.  Coddlers are also ideal for heating baby foods."
What Kevin and Janet were working on in the picture above was sautéing mushrooms and cooking two different kinds of sausage as well as warming some diced ham.  We also had some chopped bell peppers and onions. 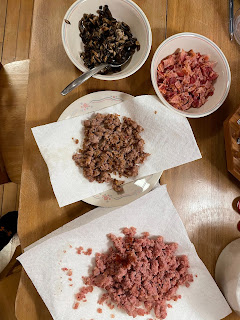 We beat a bunch of eggs together, poured a little into each coddler,  and mixed whatever other things we wanted into them and basically cooked our own individual egg casseroles.  My brother and brother-in-law wish that we had left the eggs whole, but we'll have to wait until next time to do it that way again.
The next picture is actually from the last egg coddling party that we had a couple of years ago.  You can see both the green enamel sweet corn kettle that we used again last night and my five-quart Magnalite Dutch oven.  The Dutch oven was nice because it was more shallow and therefore made it easier to retrieve the coddlers from the boiling water. 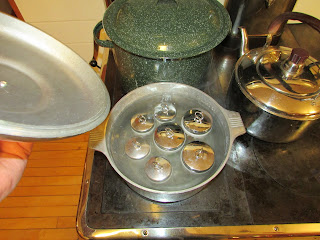 This time, we only used the green sweet corn kettle because I wanted to be able to remove the lid of the cookstove beneath it in order to facilitate the fastest boil possible.  This made it difficult to get the egg coddlers out of the water, though.  Thus, Kevin and Jason created a new kitchen tool out of a wire clothes hanger: 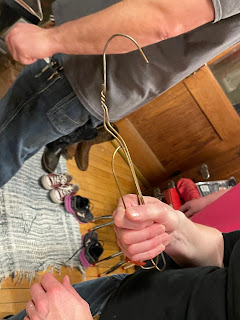 It worked like a charm, and I have been instructed to save it until the next egg coddling party. 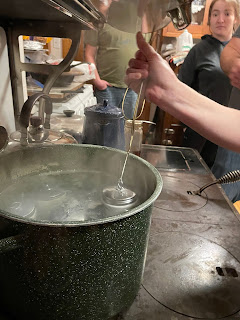 We've found that six minutes is not quite long enough to suit our general taste, especially since we put so many coddlers down into the water at once, thereby reducing the water temperature below the boiling point for a while.  You can also see from the picture above that we have some coddlers that are larger than others; they naturally need some more time.  In general, we were cooking them for ten to twelve minutes.
Once the time has elapsed, unscrewing the lids is a process that needs caution and two hot pads. 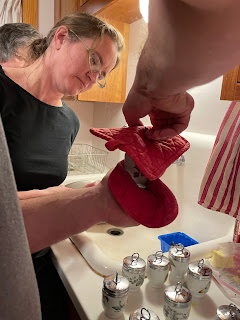 When the eggs are cooked, they come out in little bell shapes. 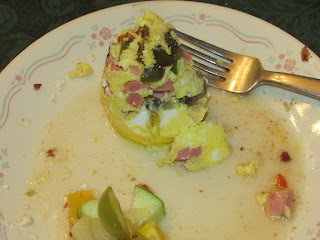 Coddling eggs is a very labor-intensive and time-consuming way to prepare them for large groups of people, but getting together was the main point of last night's gathering.  Though we all live within an eleven mile radius, because of Covid-19, we have only been together twice since March: once on Mothers' Day and then again on Christmas.  We figured since we were already exposed to each other on Christmas, we might as well get together once more, and I really enjoyed having Janet and Kevin and their families back here with me in the house where we grew up.