One of the things I've been doing during the Covid-19 stay-at-home time is trying recipes from my entirely-too-large collection of cookbooks and recipe boxes.  In our daily meals, I've tried not to duplicate dishes very often.  At one point, Nancy actually asked, "Couldn't we just have tried-and-true foods during this time?"  We've had a lot of that too, but I'm having a great time experimenting.  Several times, I've found recipes that are excellent, but there have been some not-so-good ones too.

A recipe that I'm really pleased with comes from my 1926 West Pottawattamie County Farm Bureau Women's Cookbook.  Longtime blog readers will remember me mentioning this cookbook before in this post. I've been making sure that we have always had some kind of home-baked sweet on hand during our extended stay-at-home time.  Neither of us needs the extra calories, but if a nice homemade cookie or piece of cake isn't available, we have a bad habit of eating even worse things in order to satisfy the sweet tooth we both have.

I'm excited to bring you this recipe because it has truly lived up to its name, and it is simple and fast but also quite flexible.  For those readers who are off-grid, it's very easy to mix this cake by hand, and it's made of things that are readily found in most kitchens.  The only thing that some people may not always have on hand is the sour cream.  However, that is a staple in our refrigerator.

This recipe was contributed to the cookbook by a Mrs. Belle Sharp, and she attached this note: "This is an excellent cake recipe for a busy farmer's wife who wants a hurry-up cake."

Here are the required ingredients:

The procedure is as follows: 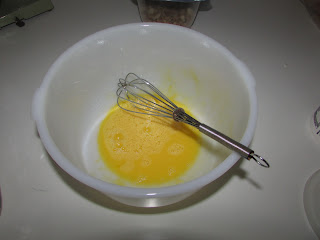 b) Beat in the sugar.

c) Beat in the sour cream. 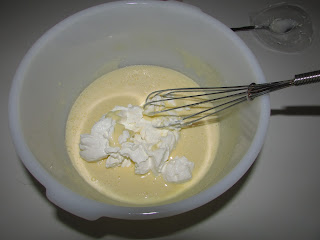 d) Add the remaining dry ingredients and the flavoring.  Beating for only a little while after the flour has been added.

I used cake flour (a tad more than 1 1/2 cups) instead of all-purpose for this plain yellow cake version, and I added about a 1/2 tsp. vanilla, a 1/2 teaspoon lemon flavoring, and a 1/2 tsp. almond extract.  I know that sounds like an odd combination, but that is what my great-grandma Ruth used to flavor yellow cakes, and, trust me, it is surprisingly delicious. 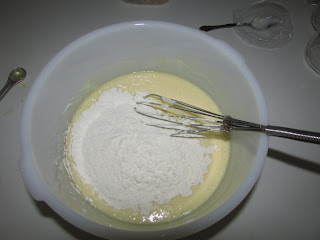 e) There were no instructions on how large a cake pan to use, but judging from the amount of batter I had, I greased a 9" square baking tin, and it was perfect. 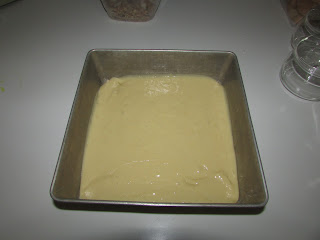 Now, the pictures that you see here are actually of the second time that I baked this cake, and it so happened that this was during the week that my brother's Ward's Economy Cookstove was here in our summer kitchen in early June.  Thus, you see it baking in that stove in the pictures below. 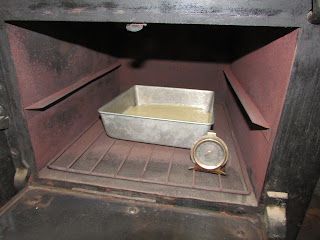 There were no instructions for how long to bake this cake, but cake baking is pretty straightforward stuff.  If you blow up the picture above, you can see that the oven thermometer is registering 350ºF.  A moderate oven until the cake tested done did the job beautifully. 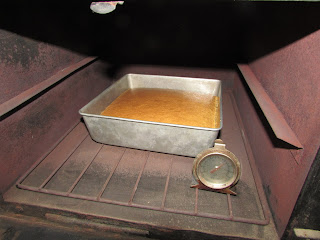 I frosted this one with a white buttercream icing that was flavored with vanilla and almond.
For the Spice Cake Version:
The original directions on this recipe say, "If wanted, add 1/2 cup raisins, 1/2 teaspoon each cinnamon, cloves, and nutmeg."  I confessed above that the pictures you just saw were of the second time I baked this cake.  The first time I baked it, I added the raisins and spices, and then I frosted it with browned butter frosting.  I should confess that I didn't add a whole half teaspoon of cloves; it was more like a quarter teaspoon.  My Grandma Marian taught me to be cautious about cloves because they are so powerful.  The cake was very good, but I took no pictures.
I used all purpose flour in this version of the cake, and the texture was nearly identical to the yellow cake version above that was actually made second.  This cake was baked in the Margin Gem back in May.
To Make a Chocolate Cake:
With two successes under my belt, I thought, "You know, I bet this could be made as a chocolate cake."  I was right!  I reduced the flour to 1 and 1/4 cups (plus a little more since I used cake flour) and added a 1/4 cup unsweetened baking cocoa.  I still put a little vanilla flavoring in, too.  Frosted with a little chocolate frosting, it was superb.

Now, each of the three cakes listed above were good.  They were all eaten with no problems and no complaints, and we shared them with others, too.  To be completely honest, though, I felt like their texture was just slightly chewy.
As I was preparing to write this post back in June, I was reflecting on the age of the recipe and figured that especially with the note that was attached to it about being a great recipe for "a busy farmwife," this was probably originally made with "country" sour cream.  "Country" sour cream is an old-timey cookbook term which denoted cream which had soured naturally.  It is an entirely different product from "commercial" sour cream, which is the cultured dairy product that is sold in the plastic tubs.  The Kitchen Klatter Cookbook that I have frequently mentioned on this blog is always careful to denote which kind of sour cream is used in its recipes, for example.
During the ten-plus years that I kept a family cow (How I wish my dairy cow had freshened this year!), it seemed like I could never keep up with the churning, and I always had "country" sour cream in the fridge.  Truthfully, I am embarrassed by the amount of sour cream I just plain threw out during those years.  I figured farmwives in the 1920s would have been much more likely to have "country" sour cream and decided to try it.
Well, I had to wait a long time before my pasteurized, store-bought cream soured.  I know I could have hastened the process with some vinegar, but I wanted to hold out for the naturally occurring product.  It was well worth the wait!  Again, I apologize for the lack of pictures--you'll just have to take my word for it--but this cake was perfect in volume and texture.  It was not a bit chewy but was exactly what we all think of when we hear the word "cake."  I attribute this to the higher fat content of "country" sour cream.
What was strange about it, though, was that each time I opened the cellophane that covered it, I got a definite whiff of "country" sour cream.  I could never taste that, though.  I only mention it because I know it may turn some people off.  If that is the case, I would recommend making the spice cake or chocolate versions.  If you have cream that has soured, this cake is a perfect way to keep from wasting it.
You can see that this recipe has truly never failed in the four different times and different ways (and three different cookstoves) I have made it.  It is extremely easy to mix, is made with common ingredients, and comes together quickly.  Try it, and I know you'll want to add it to your recipe box.
Update 10/3/20:
I've now made this cake two more times and wanted to add that souring heavy whipping cream with a little lemon juice has worked very well, too.  The last two times, I've made the spice cake version, and I really like the combination of 1/2 tsp. cinnamon, 1/2 tsp. nutmeg, and 1/4 tsp. ground cloves.  This is perfect with browned butter frosting.
Posted by Jim at 9:41 PM