A couple weeks ago I learned about a stove manufacturing company that I'd never heard of before.  This doesn't happen to me very often anymore, and it certainly piques my interest when it does.

In today's world, you could walk into an appliance store in Maine, Florida, Iowa, California, or Washington and pretty much count on the fact that the brands of ranges represented in each area of the country will all be the same.  You will see General Electric, Whirlpool, Maytag, Kenmore, LG, and Frigidaire pretty much everywhere.  However, in earlier days, the brands of stoves available for retail sale varied by the different geographic areas of the country.

Of course, mail order houses such as Sears Roebuck and Montgomery Ward, as well as Kalamazoo, whose motto was "A Kalamazoo - Direct to You," shipped their stoves all over the nation.  The Glenwoods, Clarions, and Crawfords that are so popular in the New England states only migrated west in later years and are still almost unheard of here.

Woodburning cookstoves found most frequently in our area of the country include Majestic, Copper Clad, Monarch, Riverside, and Home Comfort.  The Majestic Manufacturing Company was located in St. Louis, Missouri, which was also home to the Wrought Iron Range Company, who made Home Comfort cookstoves.  Riverside stoves were made by the Rock Island Stove Company of Rock Island, Illinois.

After much research, I would like someone smarter than I to clarify whether the Copper Clad and Monarch cookstoves were made by the same company.  I know that Monarch ranges were made by the Malleable Iron Range Company in Beaver Dam, Wisconsin.  Further, from what I have been able to learn, the Copper Clad ranges were made by the Malleable Range Company, but some sources indicate that the two companies were the same.  Can anyone tell me whether that is true?  The stoves seem radically different to me, so I'm having difficulty believing that the two stove manufacturers were really the same.

At any rate, I had never heard of the Hayes-Custer Stove Company of Bloomington, Illinois, until finding their name on the firebox door of the cookstove that I had gone to look at from a Craigslist ad.  This prompted me to do a little research.

I have been unable to determine exactly when the Hayes-Custer Stove Company came into being.  It was in business for sure in 1928 when a March 6th issue of The Pantograph spoke about the company's assets being raised from $100,000 to $150,000.  At that time the president of the company was John W. Hayes, the vice-president was Charles Custer, and the Hayes family rounded out the company's officers with Paul W. Hayes and Louis A. Hayes serving as secretary and treasurer respectively.

Unfortunately, the company did not make it through the Great Depression, closing its doors in 1937 and being auctioned off in 1940.

Hunting for images of the Hayes-Custer Stove Company yielded the following photographs.

This picture got me to thinking about another wood cookstove that I have written about on this blog.  It was one we saw in Seymour, Iowa, while on vacation near there on a visit to my sister-in-law.  At the time I wrote that post, I said that I had looked this stove all over for a brand name.  I'd say that mystery is solved! 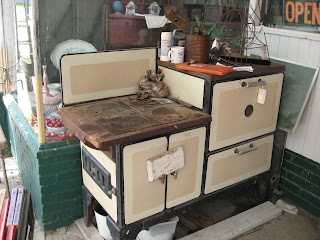 I am still completely fascinated by this cookstove design with the high oven.  I hope someday I will get the chance to try cooking on one of them.  I wonder if this stove is still in existence somewhere.  For now, I'm extremely glad to have figured out the brand name for the stove above and am looking forward to getting the Hayes-Custer that I now have up and running.