It Can Be Done: Using Two Pressure Canners Simultaneously on a Wood Cookstove

I had plotted and planned.

I had reasoned and pondered.

But I did not know whether it would work.

I'm here now to tell you that it can be done.  You can can  (see what I did there?) in two different pressure canners at the same time on a wood cookstove!

You might be wondering why this is a big deal, especially since one could easily can in two different pressure canners on most modern ranges and since it is not difficult to pressure can with a single canner on a wood cookstove.  (See my initial post about that here.)  To understand the significance of my discovery, you have to remember that to adjust the heat when you are cooking on a woodburning range, you move your cooking vessel closer to or away from the fire.  It is not as simple as turning a pair of dials.  Furthermore, as soon as a pressure canner has reached the necessary pressure, you must reduce the heat in order to maintain the adequate pressure without having it continue to climb.  Thus, I wasn't sure that it would be possible to move two very large canners across the top of the stove in order to accurately maintain the pressure in both of them.  But it worked!  Let me tell you how it went.

First, you need to know that one of the canners that I was using is a weighted gauge canner, and the other has a dial gauge.  This is very important.  I'm not going to go into all the details about the difference between the two types of canners here because you can find that information in many other places on the Internet.  However, it is important to know that a weighted gauge canner releases any extra pressure from the inside of the canner, while a dial gauge canner does not.

Always at the beginning of the pressure canning process, I have a raging fire going.  This is particularly easy to do when you are using summer fuel.  To retain as much of the nutrient value of the food being canned as well as the physical quality of the food, you want to keep the total time that the food is in the canner to a minimum.  Thus, you want the raging fire so that the canner reaches the desired pressure as quickly as possible.

Now, a big teakettle is an integral part of the canning process because you need boiling water to pour over the food inside the jars.  For that reason, when your fire is first started, the teakettle is perched directly over the firebox.  A small saucepan with your canning lids covered by hot water is placed far away from the firebox so that they stay hot but do not boil.  I put the kettle portion of the canner with the necessary water inside it on the middle part of the cooktop to heat the water.  This way, you reduce the risk of jars breaking if a hot jar of food and boiling water makes contact with cold water in the bottom of the canner.

Once the weighted gauge canner was loaded, I put the lid on it, and it was moved so that it sat directly over the firebox to begin building pressure.  More water was put into the teakettle, and it was also put over the firebox so that it could come back to a boil in order to fill the jars in the second canner (Sorry!  I forgot to get a picture of these first steps.)  The second canner was also put on the middle of the stovetop so that it could begin getting hot.

﻿
Once the dial gauge canner reached the desired pressure, "the dance" began.  I call it a dance because you have to move the canner around until you find that sweet spot that maintains the correct pressure.  You can see that I moved the weighted gauge canner back over the firebox, but I offset it quite a ways so that it wasn't receiving the full heat of the fire.  The dial gauge canner took a trip to the far right. 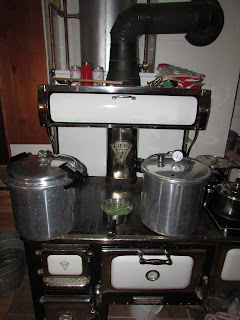 At this point in the process on this particular evening, I quit adding fuel to the fire because I knew I was not going to can anything more.  So, in the next two pictures, you will see the dial gauge canner slowly migrating closer to the firebox in order to maintain its pressure.  The weighted gauge canner was quite happy to stay right where it was for the duration of the canning time.  Its weight jiggled more than three to four times a minute, but that is all right.  It didn't jiggle constantly, and because of the way that the weighted gauge canner works, it was maintaining the correct pressure on its own. 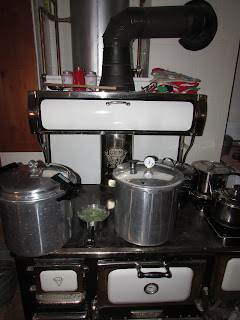 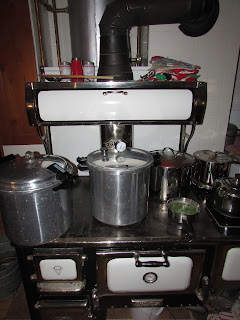 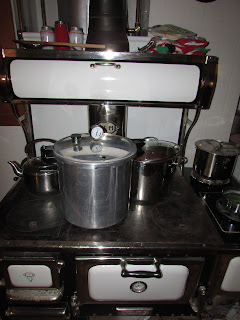 I was extremely pleased at how easily this worked, and I'm looking forward to doing it again sometime.  It certainly increases the efficiency of the canning process when one fire can do so much!
Posted by Jim at 8:52 PM

Email ThisBlogThis!Share to TwitterShare to FacebookShare to Pinterest
Labels: canning on a cookstove, canning on a wood stove