Cheating with Your Wood Cookstove: Creamed Chicken over Biscuits

I don't remember exactly when my mom started making creamed chicken over biscuits, but I remember that I was not a little kid anymore, that it was an instant hit, and that I wondered why she hadn't tried it on us earlier.  Of course, maybe it was all very strategic.  If she had served it to us too early, our palates wouldn't have been developed well enough to fully appreciate the pleasure of this stick-to-your ribs dish, and we might have summarily rejected it as we did with several more "grown up" foods that she tried on us.  She likes to tell people how long her list of recipes-to-try-again-when-the-kids-are-gone was when we were young.

At any rate, it was Mom who initially got me hooked on this entree.  My mother-in-law also has her family hooked on her version of Creamed Chicken over Biscuits, but her method for making it is entirely different.  Both recipes are delicious, but in this post I'm going to share my mom's version.

You can see from the labels on this post, that this is a dish made from leftovers.  Therefore, prior to this meal, you need to have roasted a chicken (to read about one way to do that in a wood cookstove click here) and made gravy from the drippings.  We had several people in my family as guests for a Sunday dinner back in August and served a roasted chicken with all the trimmings.  After the meal, Nancy picked the leftover chicken off the bones, and we saved the leftover gravy too.  A few days later, we made Creamed Chicken over Biscuits.

The first thing to do is to build a really hot fire.  Biscuits bake best in a quick oven, and so I always use a lot of little sticks, or "biscuit wood," to accomplish this.

To make biscuits, I used to always cut the shortening into the flour, but I've taken to a different method of incorporating shortening that my friend Leah told me about.  Now, while the oven is heating, I melt my shortening on the stove.  Sometimes I use the warming oven, other times the lid of the reservoir--wherever I think the heat will be sufficient.  This time I used a very small saucepan on the top of the stove.  I melted perhaps a 1/3 cup of Crisco. 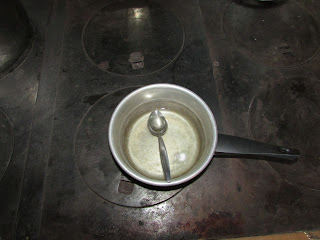 While the shortening is melting, sift two cups of flour into a mixing bowl and add around a tablespoon of baking powder to it.  At this point you might sprinkle a little salt in too if you wish.  Mix all the dry ingredients together.

Once the shortening has melted, pour it into a heat-proof measuring cup. Then add enough cold milk or buttermilk to make one cup altogether while stirring constantly.  The coldness of the liquid causes the shortening to congeal again, thus allowing it to be evenly incorporated into your flour. Brilliant!  (I hate washing the pastry blender.) 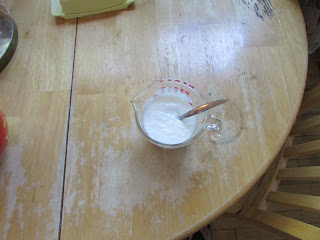 Pour the buttermilk/shortening mixture over the flour mixture and toss lightly to mix.  Don't work the dough too hard as that will make for tough biscuits later! 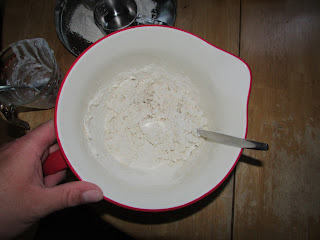 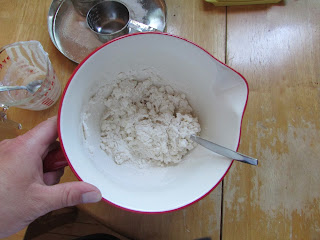 Turn the dough out onto a floured board. 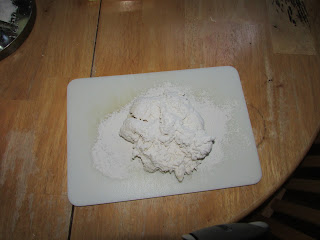 Knead the dough a few times, then pat out until it is about an inch thick. 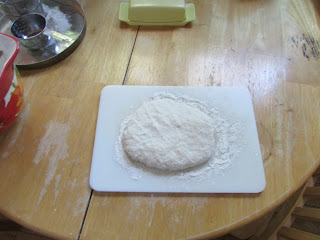 Cut the biscuits in the shape and size you desire.  For many years I cut biscuits with an old metal drinking glass that Gramps kept by the utility room sink when our house was still his home.  The problem was that cutting the biscuits resulted in compressing the air in the glass, and sometimes it would "burp," causing the biscuit to become misshapen.  Last year, one of the fundraisers at school had a set of biscuit cutters on it, and I'm very pleased with my four various sized biscuit cutters.


Let the biscuits rest for at least five minutes.  The baking powder will cause them to rise a little, and they will be nice and light.

The next step is to put together the creamed chicken.  Here is where this recipe really qualifies as what I would call "cheating."  To whatever leftover gravy you have from the roast chicken dinner, add a can of cream of chicken soup.  Add whatever leftover chicken you have to the gravy/soup mixture. 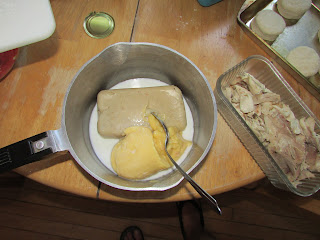 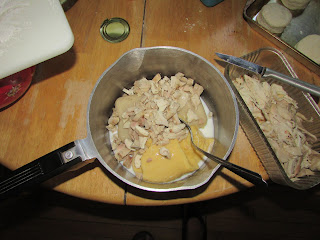 Pop the biscuits into the hot oven now. 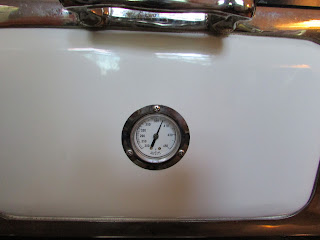 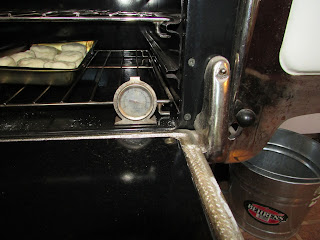 Put the chicken/gravy/soup mixture on the stove to come to a boil.  You probably won't want to put this right over the firebox since your fire will be so hot for baking the biscuits.  You can see in the picture below that mine was closer to the reservoir than to the fire.

If the gravy was quite thick, you may need to add a little water or milk. Don't do this until you've had a chance to warm the gravy/soup mixture, though, because leftover gravy congeals in the refrigerator and may look deceptively thick until it is heated through.


Once the creamed chicken has come to a good boil, move it to a place where it can be kept hot while your biscuits finish baking.

To serve, pour the creamed chicken over the biscuits and enjoy.  I like to drizzle a bit of honey over the top of it all.

Notes:
1. You could make your own white sauce instead of using the can of cream of chicken soup.  Then this recipe is no longer cheating.
2. My favorite side dish for this is peas, which I like to mix into the creamed chicken mixture.  Peas are not Nancy's favorite side dish, though, so you don't see them in the picture.
3. As with most chicken recipes, turkey can be substituted in this dish, and this is one of our family's favorite post-Thanksgiving meals.﻿

Email ThisBlogThis!Share to TwitterShare to FacebookShare to Pinterest
Labels: cheating with your cookstove, leftovers, poultry recipes