Operating the Drafts of a Wood Cookstove: The Point of Diminishing Return

When we first installed the Margin Gem, one of the aspects of operating the stove that was significantly different than the Qualified Range was the amount of time needed for the wood to ignite when adding wood to an established fire.  Then, once the fuel ignited, it didn't seem to burn like it would have in the Qualified.  Thus, I would open the drafts of the Margin Gem until I felt like the fire was burning the way I thought it should.

Well, I'm embarrassed to admit that basically, I spent the first three years of operating the Margin Gem quite inefficiently.  I remember telling my mom that I thought the Margin Gem was a real wood eater.  What I've come to understand in the last couple of years is that the Gem shouldn't have nearly the amount of air that I was giving it in order to reach peak heat output.

With the Qualified Range, once the fire was established, I would operate the stove with all drafts completely closed unless I was having trouble keeping the fire burning because of wet wood or something like that.  Our kitchen chimney draws extremely well, and the Qualified, though a very well made stove, was not airtight, so plenty of air was constantly being pulled in to the fire even with the drafts tightly shut.  Thus, fires always seemed to burn brightly in that stove.

The Margin Gem cookstove is equipped with two drafts.  The primary or direct draft is located in the ash cleanout door below the firebox. 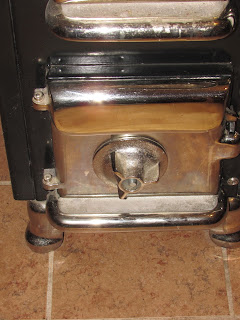 The secondary air-jet re-burn draft is on the left side of the stove.  For more information about this draft, see this post. 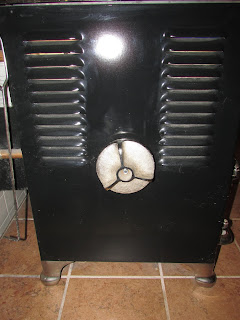 When I first start the stove, I usually open both drafts widely.  However, the secondary draft can usually be sufficient by itself, so sometimes I only open it.  As the fire catches and begins to burn hot, I always shut the direct draft completely and then just operate the stove by adjusting the secondary draft.

Thus, during the first couple of years of using the Margin Gem, I would often leave the secondary draft open as much as a quarter of an inch, trying to get the fire to behave the way that I was accustomed to seeing it in the Qualified.  My thinking was that since the Qualified was not airtight, it must have been permitting a lot of oxygen to get to the fire even when the drafts were completely closed.

What I've come to believe is that the Margin Gem actually operates at peak efficiency when the secondary draft is opened enough to let air in but not enough so that you can see any gap between the knob and the air intake shaft.  Once the fuel has caught fire, this seems to allow sufficient air for combustion, but it keeps the stove very hot and the fuel is not consumed so quickly.

The Point of Diminishing Return-

You might be questioning my use of the phrase "the point of diminishing return" in the title of this post by now.  You see, conventional wisdom would lead one to believe that the more oxygen that is allowed to get to the fire the faster it would burn and, therefore, produce more heat.  (I believe that this is indeed the way a coal fire would operate, but someone should confirm that in the comments below.)  However, what I've come to understand is that if the drafts are open too wide--past the point of diminishing return--the abundance of room temperature air that is allowed to flow through the stove actually cools everything down.  This results in having to burn quite a bit more fuel in order to provide enough heat for cooking and baking.

This "point of diminishing return" will potentially be different for every stove, every chimney, every type of wood, and even every weather condition, so it is the job of the wood cookstove cook to constantly be observing and evaluating the way the stove and fire are behaving in order operate the wood cookstove at peak efficiency.

In any event, I no longer think that the Margin Gem is devouring more fuel than necessary in proportion to the amount of heat that she puts out.

What methods for operating the drafts of your wood cookstove do you use?  Let us know in the comments below.