Sometimes one person's misfortune ends up being another person's gain.  Nancy and I were on the "gain" side of that equation when one of my brother and sister-in-law's freezers quit a couple days ago.  Sara caught the food before it spoiled, but they brought a cooler of various kinds of meat and fish that needed to be used in a hurry to our family's Mother's Day dinner, and we were on the receiving end of two prime halibut steaks.

Now, I am not a huge fish eater.  This land-locked Iowa boy prefers meat and poultry over sea-dwelling creatures most any time.  However, my sister shared a recipe for baked halibut several years ago that is out of this world.  Of course, it is a recipe that has managed to make fish--a usually healthy entree on its own--into an artery-clogging joy that may indeed manage to send you out of this world into the next, but you might as well die happy, right?  Besides, I've only made it twice, and those two times have been five years apart.

The last time I made this was in the Qualified range, and we took that out of the kitchen in 2011.  Kevin and Sara had graciously shared some of the halibut that Kevin had caught on a fishing excursion with Sara's dad then, too.  After getting a taste of halibut prepared this way, I was hooked, so we looked for halibut in the grocery store and decided that it was definitely not in our grocery budget.  Therefore, you can kind of understand why I was excited to receive these beautiful halibut steaks. 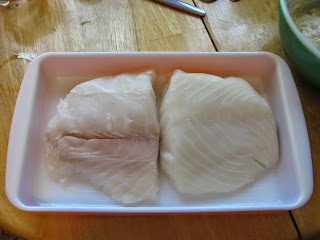 You can find the recipe that my sister gave us here Taste of Home's website.


After putting the sour cream mixture atop the fish and covering it, I slid it into the oven of the Margin Gem.  The oven was quite hot (probably around 450) because I had gotten a little over-zealous with small pieces of wood, trying to get the oven hot in a hurry.  The extra heat in the oven was no problem since our halibut steaks were much thicker than the one-inch ones listed in the recipe and because I think this recipe is pretty forgiving of a higher oven temperature.

Once again I don't have a photograph of the finished product, but when it is finished, it doesn't look any different than what you see in the last photo, which was taken as it was uncovered before the last fifteen minutes of baking.  I'm sorry for my lack of a photo, but we were in a hurry because we had to get to a meeting.

I hope you enjoy this one.  You know I wouldn't have shared it if I didn't think it was delicious!

Email ThisBlogThis!Share to TwitterShare to FacebookShare to Pinterest
Labels: baking in a cookstove, seafood