As is mentioned in the "About Me" section on the left, my great-great-aunt Meme is the person who taught me to cook.  She was also the one who unwittingly instilled in me a love for the woodburning cookstove.  She would be so embarrassed if she knew that I credited her with this aspect of my life, but it is true nonetheless.

Meme was the candy maker in our family for many years, and she taught me to make fudge and divinity.  I blogged about her fudge recipe last December, and in doing so mentioned penuche.  Penuche is basically a caramel fudge.  Meme had ceased making penuche before I began assisting her with the candy making in 1985, but she occasionally would talk about it.  She and her sister Pearl made all of their candy on the 1920s Monarch range that they had in the "big house" on the farm where my first cousin and his wife now have a new home (the old house having been destroyed by fire in the early 1960s).

It wasn't until the late 1990s that I finally got to taste penuche, and I fell in love with it immediately.  I looked up Meme's recipe for it and tried making it, but it was a complete failure--for the first many years that I made it.  Part of the problem was the recipe.  It read just as follows:

That was it.  Meme's recipes are just like many of those that belonged to great, experienced, from-scratch cooks: they didn't include any directions.  At first, I figured it was just me.  The next time I made it, I figured there was something that I didn't know.  I looked up other penuche recipes and found a variety of directions, but none of the recipes were exactly like Meme's either.

Fortunately, I have Meme's recipes (complete with the ancient panty-hose elastic that she used to keep them together in fifty-year-old shoeboxes), and I was digging through them for a different recipe when I found Meme's penuche recipe complete with directions.  What a find!

At this point, it seems fair to tell you that even though I've found directions, that doesn't mean that I've had success every time I've made this recipe.  Penuche, in my opinion, is tricky stuff to make, but it is so delicious that I haven't given up.

Here is what you do: 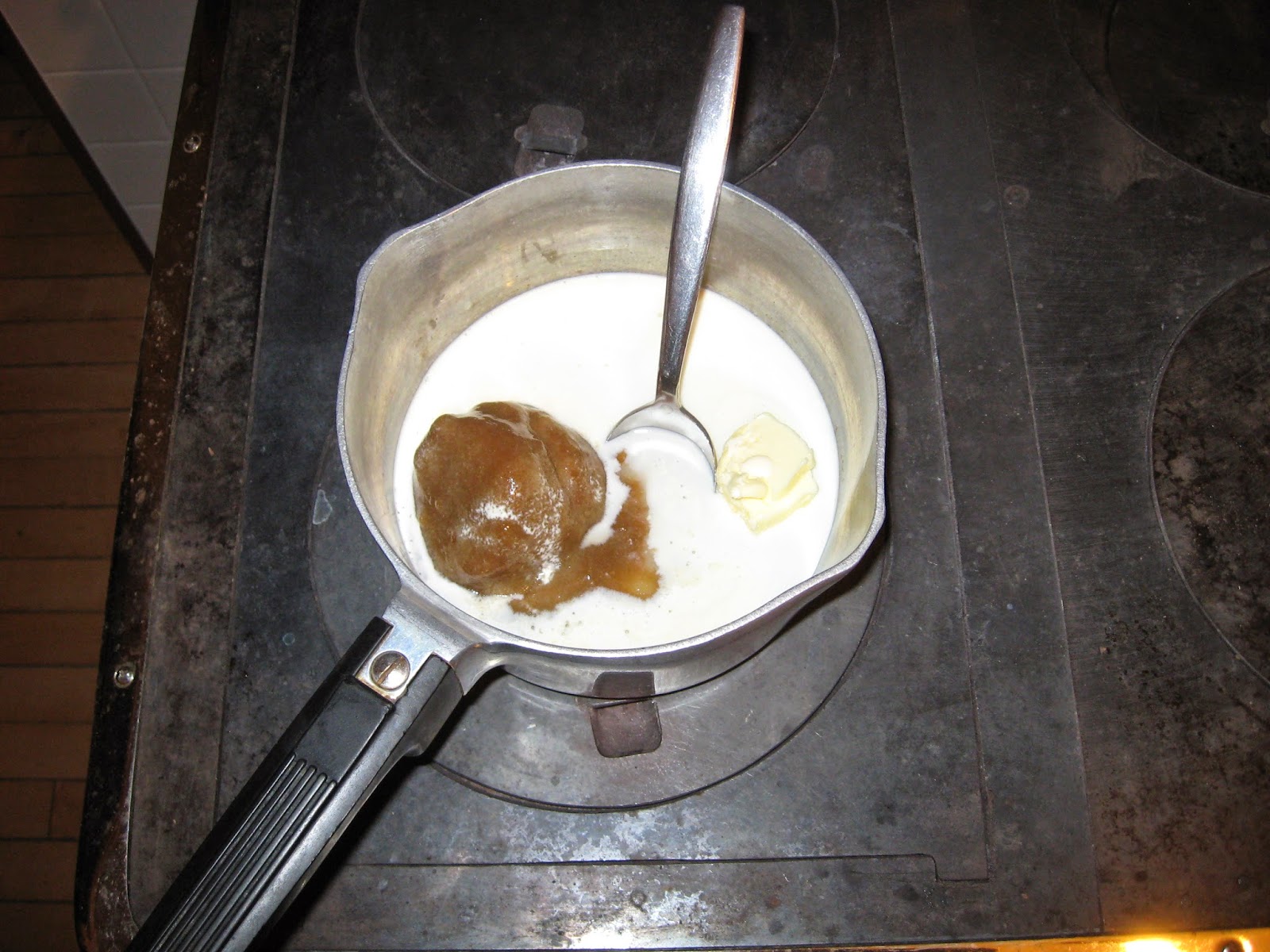 2. Bring to a boil over the firebox, but then move the pan to a cooler part of the stove so that the boiling continues but not quite so briskly. 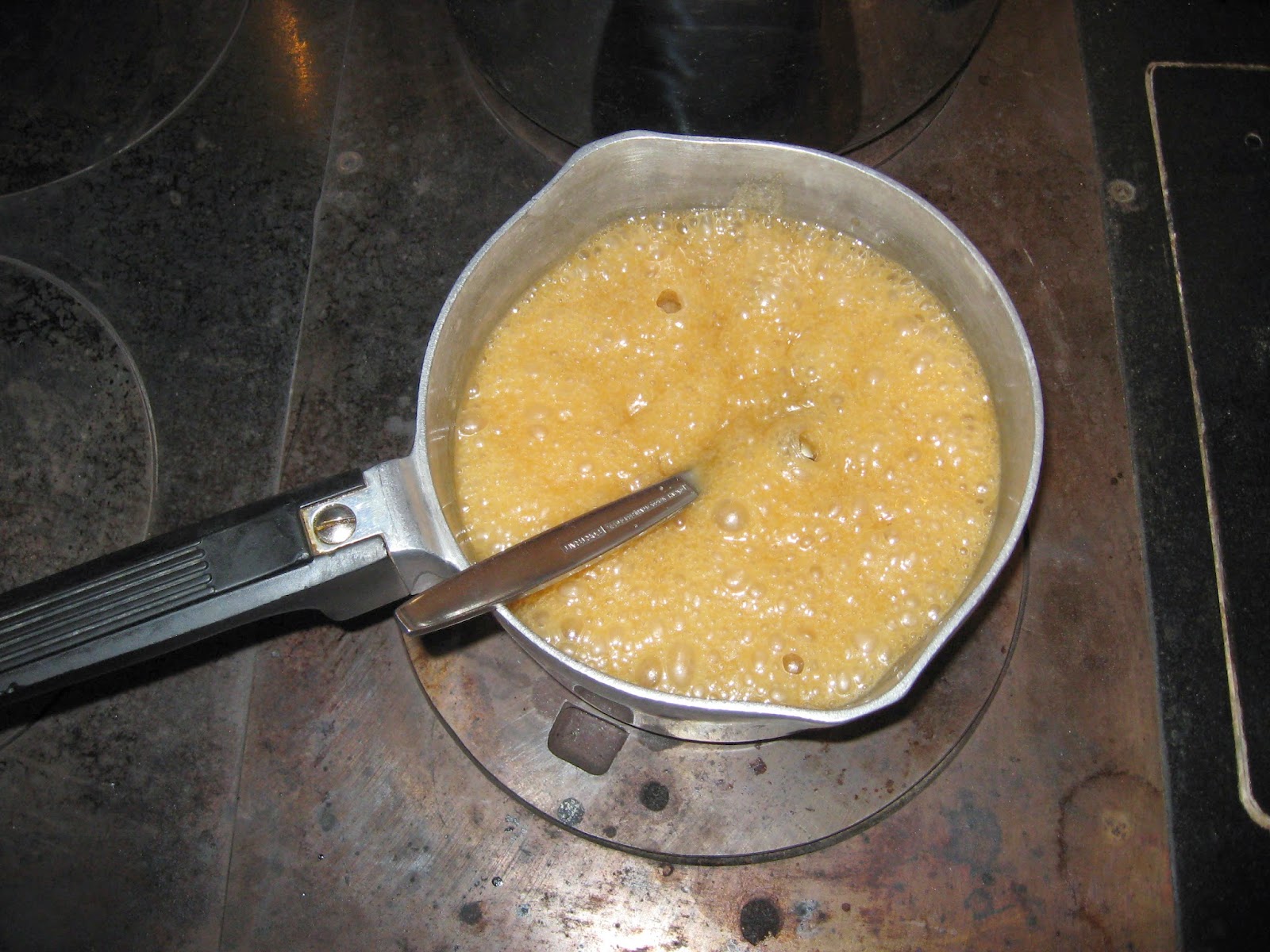 3. Cook to softball stage (238 degrees on a candy thermometer); don't take it off the fire a moment before, and don't leave it on the fire a moment longer!  I prefer to use the cold water test.  When you allow a few drops of the cooking mixture to fall from your spoon into a teacup of cold tap water, stir it around with your finger, and it forms a soft, chewy ball of candy, you have reached the soft ball stage.  Remove from the fire and allow to cool to lukewarm.

4. When you can put your hand on the bottom of the saucepan without burning it, add the vanilla and begin beating.  The mixture will become a lighter color and will thicken.

5. At this point, you have two options.  I like to spread the candy in a buttered 8 x 8 cake pan to be cut into small squares later.  My mother remembers that Meme would drop the penuche from a teaspoon onto waxed paper and push a pecan half onto the top of each piece.  Just know that you have to work like wildfire at this point.  The candy will set up very, very quickly. 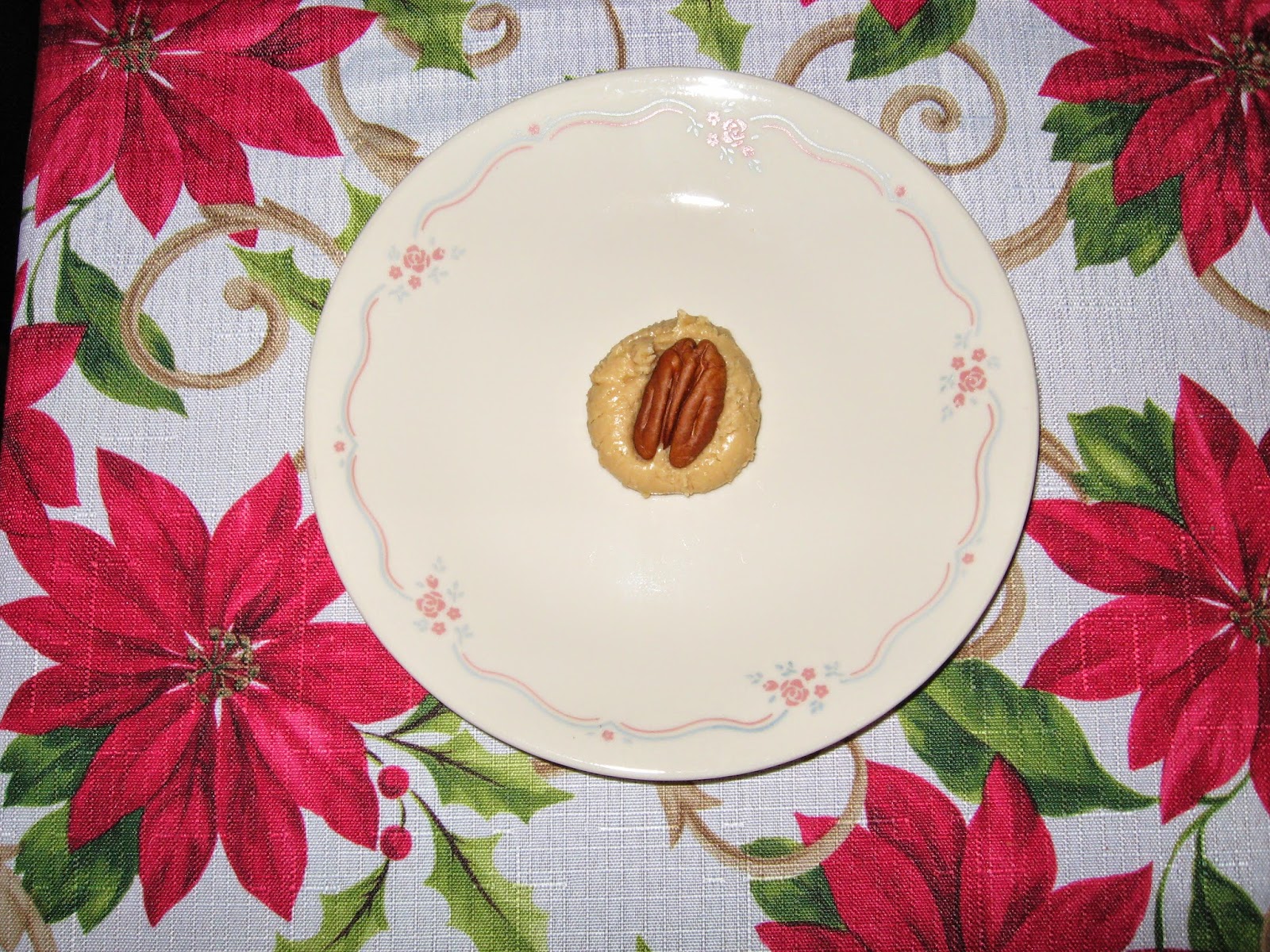 Either way, this old-fashioned candy is fantastic--when it turns out properly--and I hope that you'll enjoy it too.  Don't be turned off by the descriptions of my repeated failures.  I figure that one of the services that I can offer my blog readers is to suffer through the failures in order to deliver you a better chance of a successful final product on your first try.  Fill up the comments section with your findings, knowledge, and advice.  Good luck!

Note: The next time I make this, I'm going to try buttering the saucepan before cooking the penuche.  I think this might help keep it from turning grainy around the edges.

P.S. (12/23/14)  I forgot to mention that if you do have a batch that fails, don't discard it.  Doled out a couple of spoonfuls at a time, it makes a delicious sweetener for your bowl of hot breakfast cereal.
Posted by Jim at 7:55 PM