Making Toast on a Wood Cookstove

I find it interesting to read the many articles about how to make toast on a wood stove (heating stove or cookstove) which appear all over the internet, and I've decided to put my two cents in with this post.

To be completely honest from the outset, we do not make toast very often on our wood cookstove.  Our early 1950s Toastmaster toaster is just too convenient.  However, I know that many of the people who read this blog are interested in homesteading, preparedness, or increased self-sufficiency.  Furthermore, many people who cook on woodburning cookstoves live an off-grid lifestyle, and a conventional toaster can be quite a drag on alternate power sources.  Thus, it seems pertinent to include information about toasting on a cookstove here.

One can make toast on a wood cookstove in five different ways.  I think some are better than others, though, so I'll warn you right now that I will be editorializing along the way.  You're not a bit surprised, are you?

To make an accurate comparison of the toasting methods, I used purchased bread so that each slice would be as nearly uniform in size and composition as possible.  No matter how I slice homemade bread, I cannot get it to be perfectly even, and I didn't want the bread to be a variable which affected the results of my experiments.

Method 1: Using a stovetop--or "camp"--toaster.  These can be purchased all over the internet in the style you see below or in what is sometimes called the pyramid style, where a louvered pyramid directs the heat of the stove toward the toast that is resting parallel to the sides of the pyramid.  Mine happens to have been purchased from Lehman Hardware, but I do not know whether they still carry it. 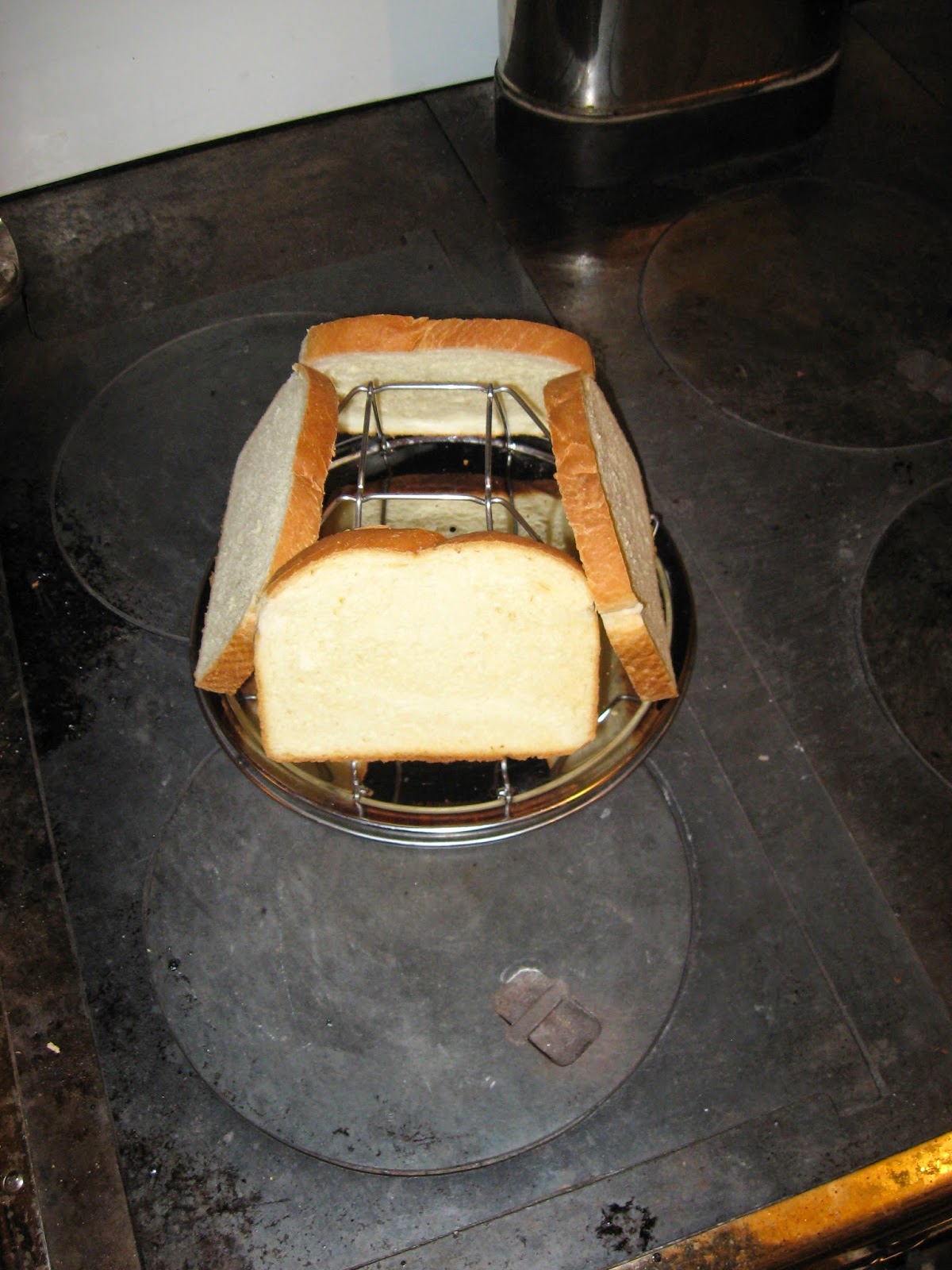 I consider the stovetop toaster method quite unsatisfactory for a woodburning cookstove.  I had asked for this toaster as a Christmas gift from my in-laws several years ago, thinking that it would be the perfect thing to add to my collection of wood cookstove accessories.  To make a long story short, I could never get it to work right on the Qualified range, but thought it must have just been me.  It went to the basement for several years, but I decided I would try it out on the Margin Gem.
The bread that you see in the picture rested on the toaster for 30 minutes and did nothing but dry out.  Thinking that I might just as well get rid of the thing (Nancy is constantly pointing out that we have too much stuff in our house), I decided to give it a try on the gas range.  Within four minutes of having the thing over a pretty high flame, I had very respectable toast.  Thus, this toaster went back to the basement in case I need toast in the middle of a summer power outage, but it will not be used on the Margin Gem again.
Method 2: Laying the toast directly on the cooktop.   Of course, you first want to make sure that your cooktop is very clean--free of fly ash, wood dust, and any spilled food which might have cooked on and then carbonized.﻿  Lay the piece of bread wherever you feel that the heat is appropriate.  I put mine directly over the firebox, but I think that at the time I was conducting this experiment, that place was perhaps a little too hot. 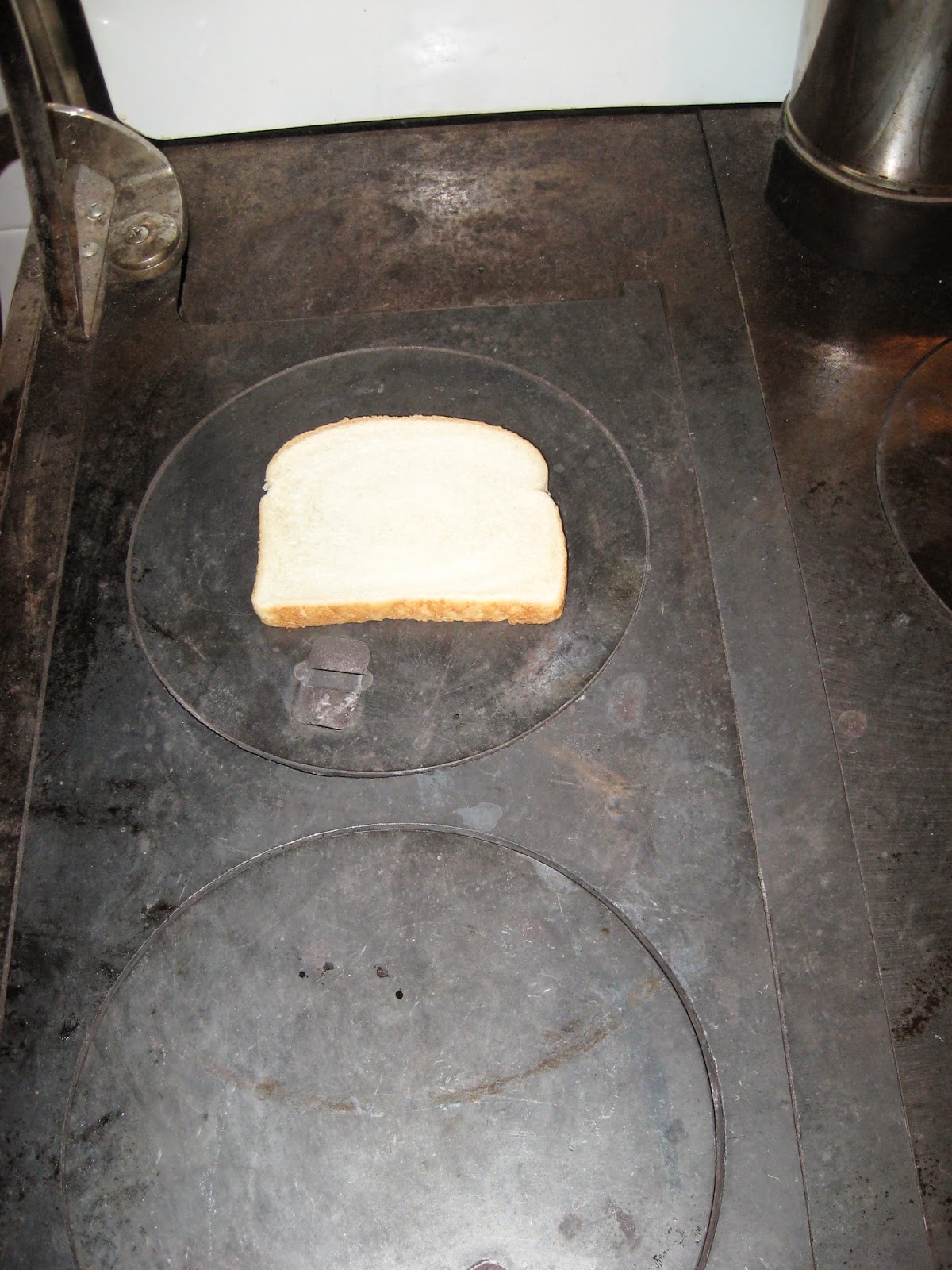 When you feel that the bread is toasted to your liking on the first side, turn it to toast the other side.  Watch it carefully because this method goes quite quickly. 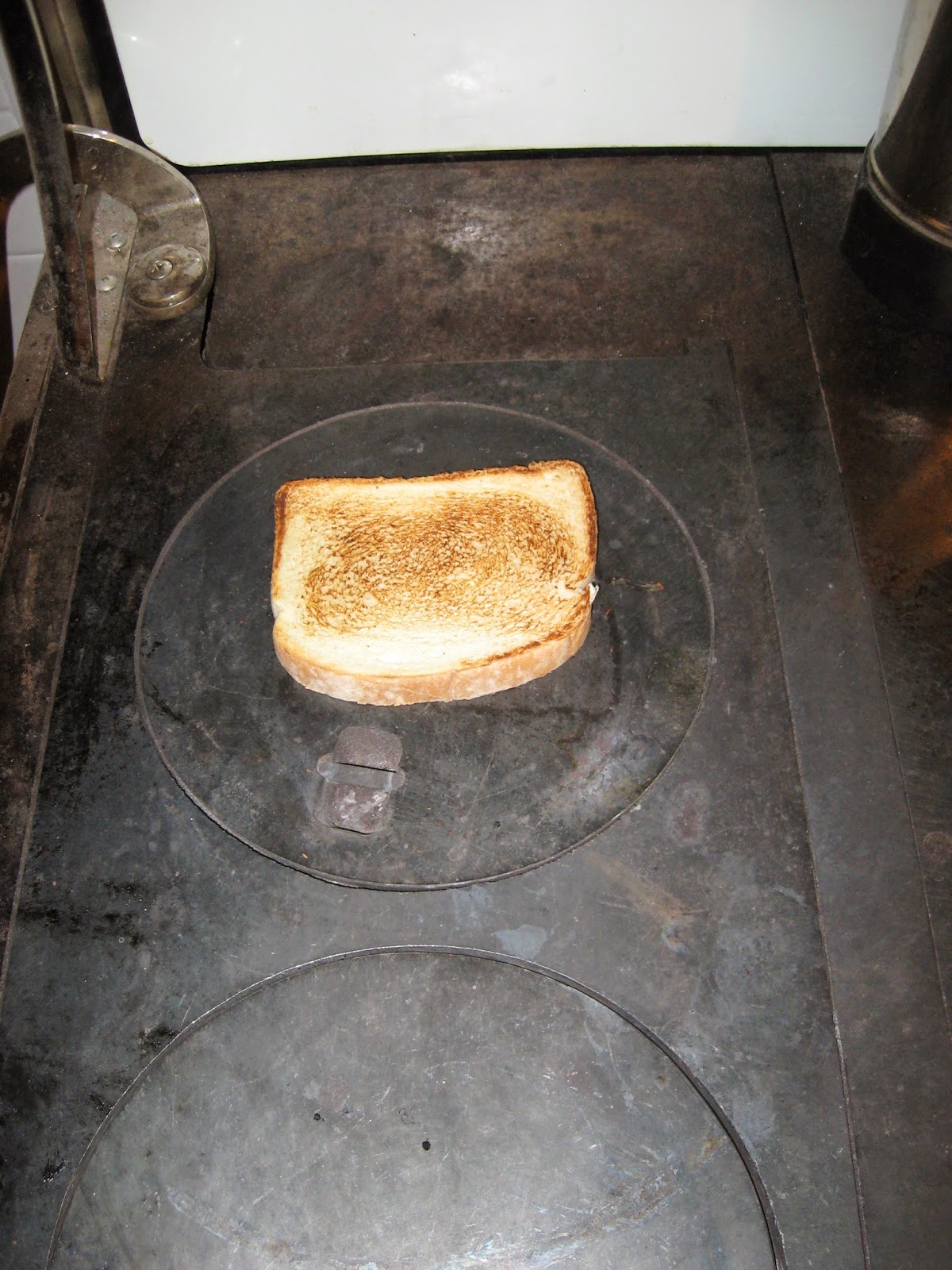 A lady who lives in our small town and is a friend of my mother's once told me that the only toast that she ever had growing up was made this way.  She shared this memory because for some reason she and my mom were talking about burnt toast and how it can be salvaged by scraping the burnt parts with a table knife until all of the blackened crumbs have been scraped off.  She grew up thinking that scraping the burnt part was just a necessary step in the way everyone made toast, so you can see that this method can easily result in burning your bread rather than toasting it. 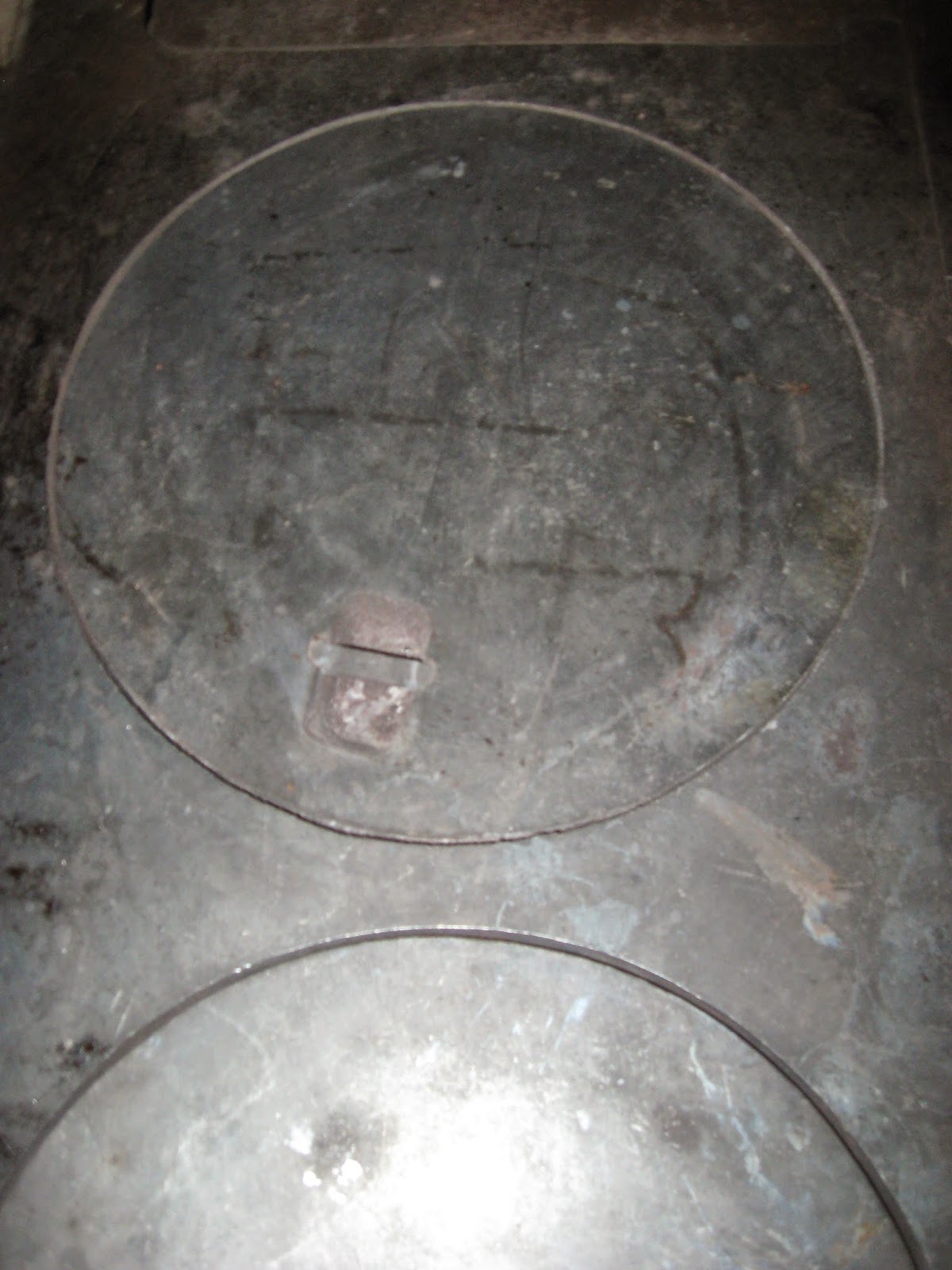 The aspect of method two that I don't much care for is that the toast always leaves its autograph on the stovetop.  If you've been following this blog for any length of time, you've seen picture proof that I'm not as fussy about the look of my stovetop as I probably should be, but still.

Method 3: Toasting bread on aluminum foil on the cooktop.  I didn't think of this one myself.  I found this one online here at this "toast post" on the Paratus Familia Blog. 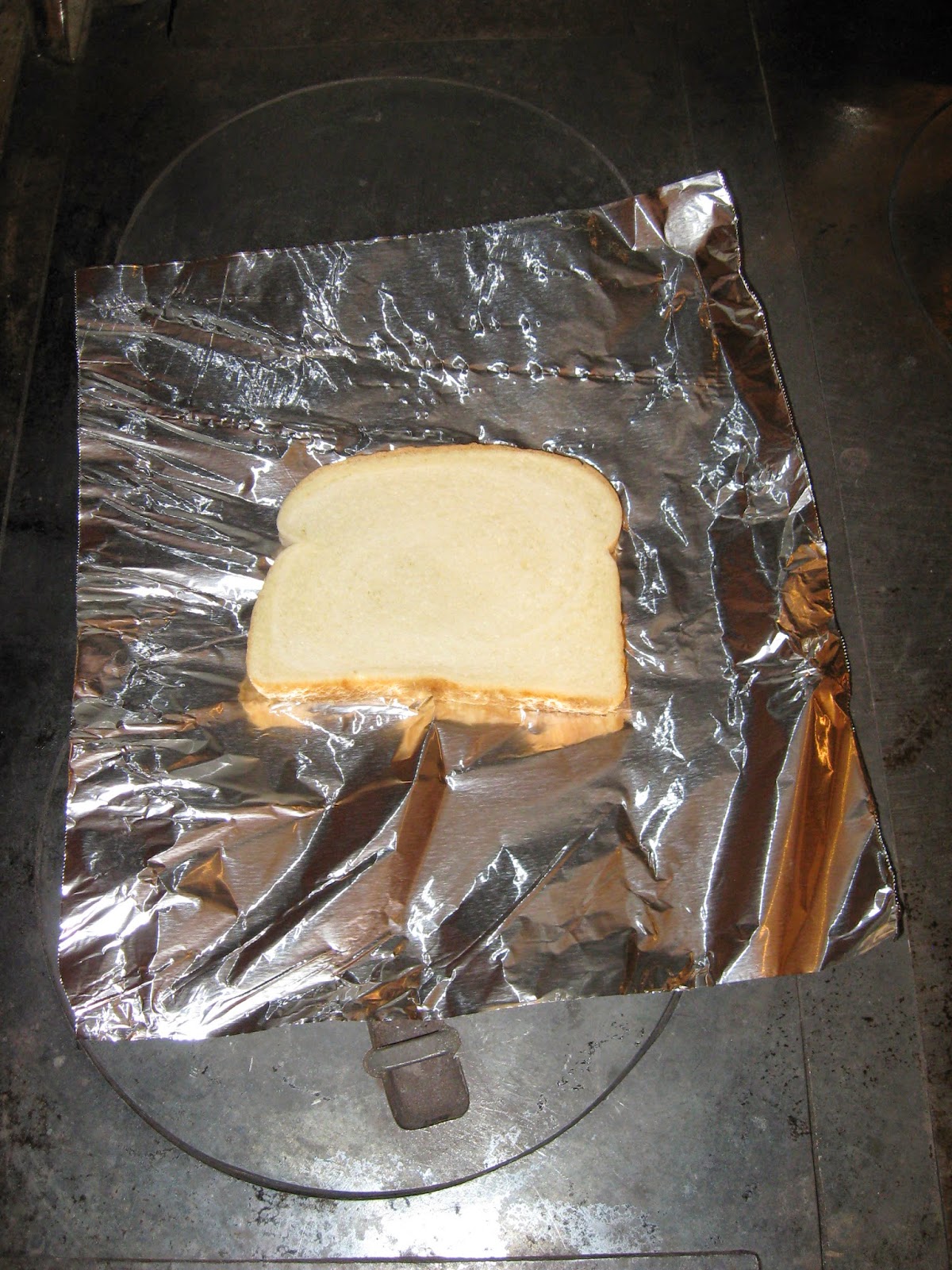 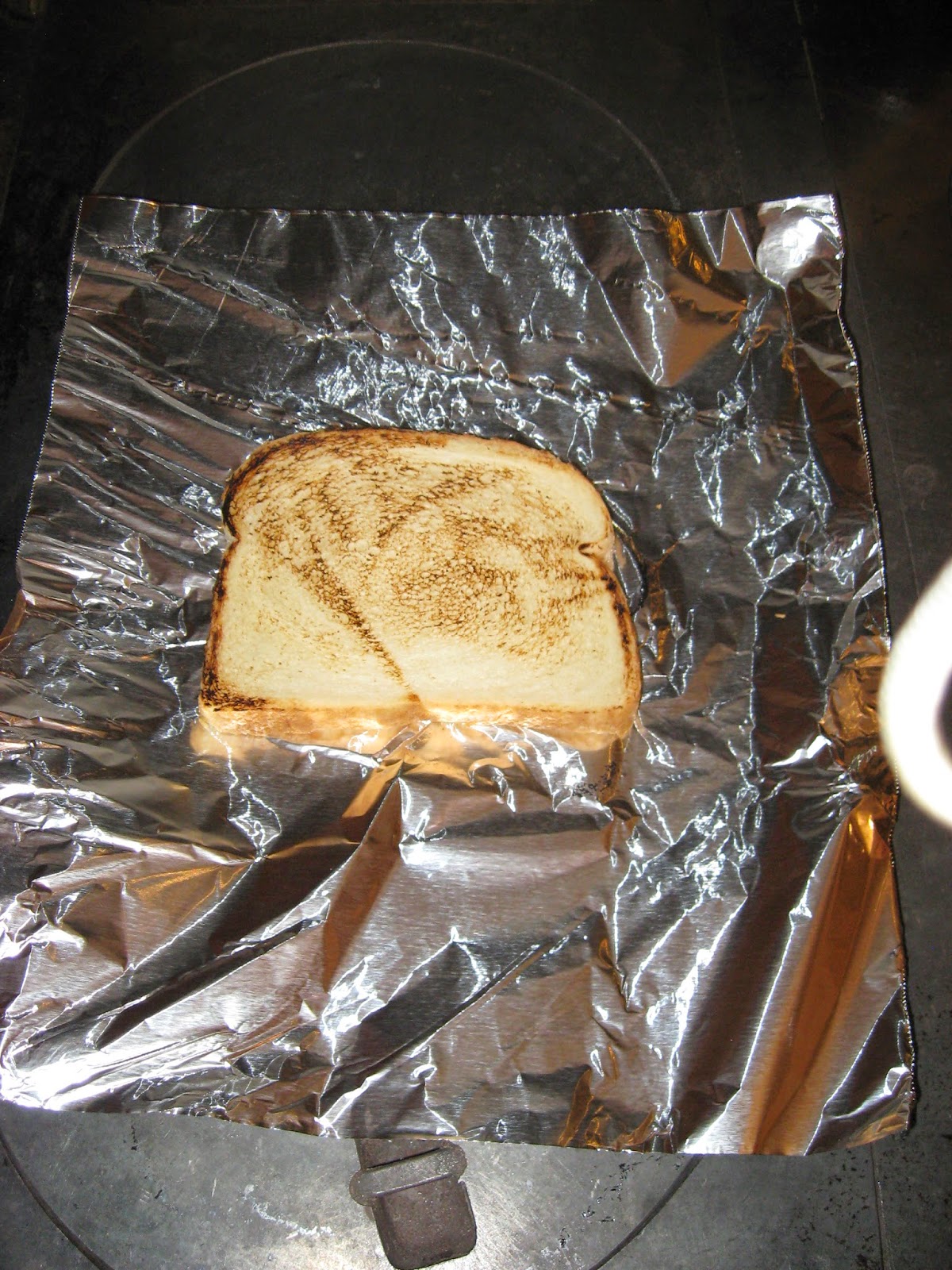 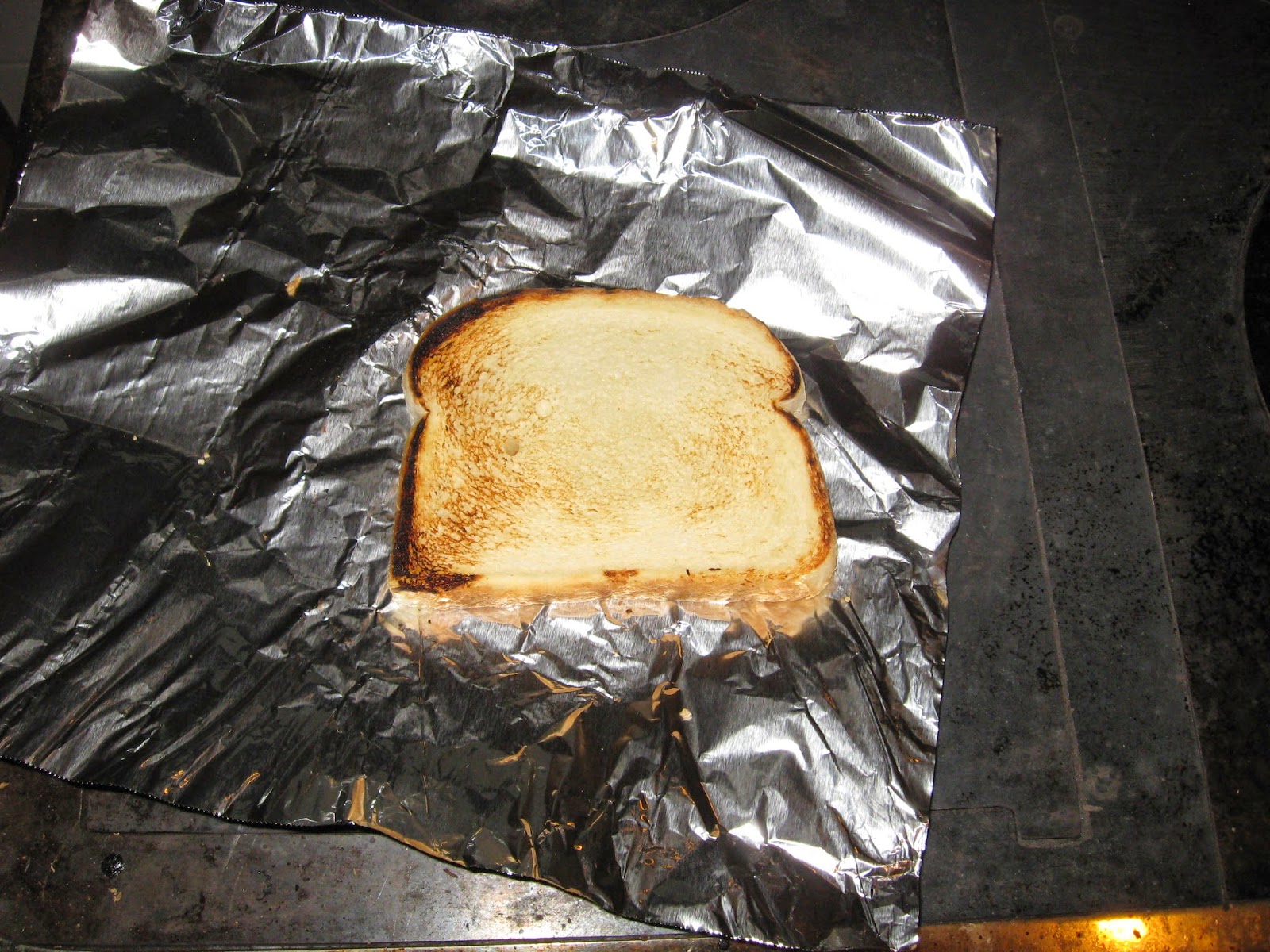 Clearly, this method works--quickly, too--and I've made good toast this way before, but in the pictures above, I had the foil over a part of the stovetop that was a little too hot for toasting.  My main complaint with this method is that after you've used your toast foil for a while, it will need to be replaced.  That is why this is not my preferred method.

Method 4: (my preferred method) Toasting on a cast iron griddle.  I asked for this 11 1/4" breakfast griddle as a Christmas gift when I was in either junior high or early high school.  It is extremely well seasoned from frying pancakes and French toast, so things don't stick to it.  I put it over the hottest part of the stove and lay the bread on it. 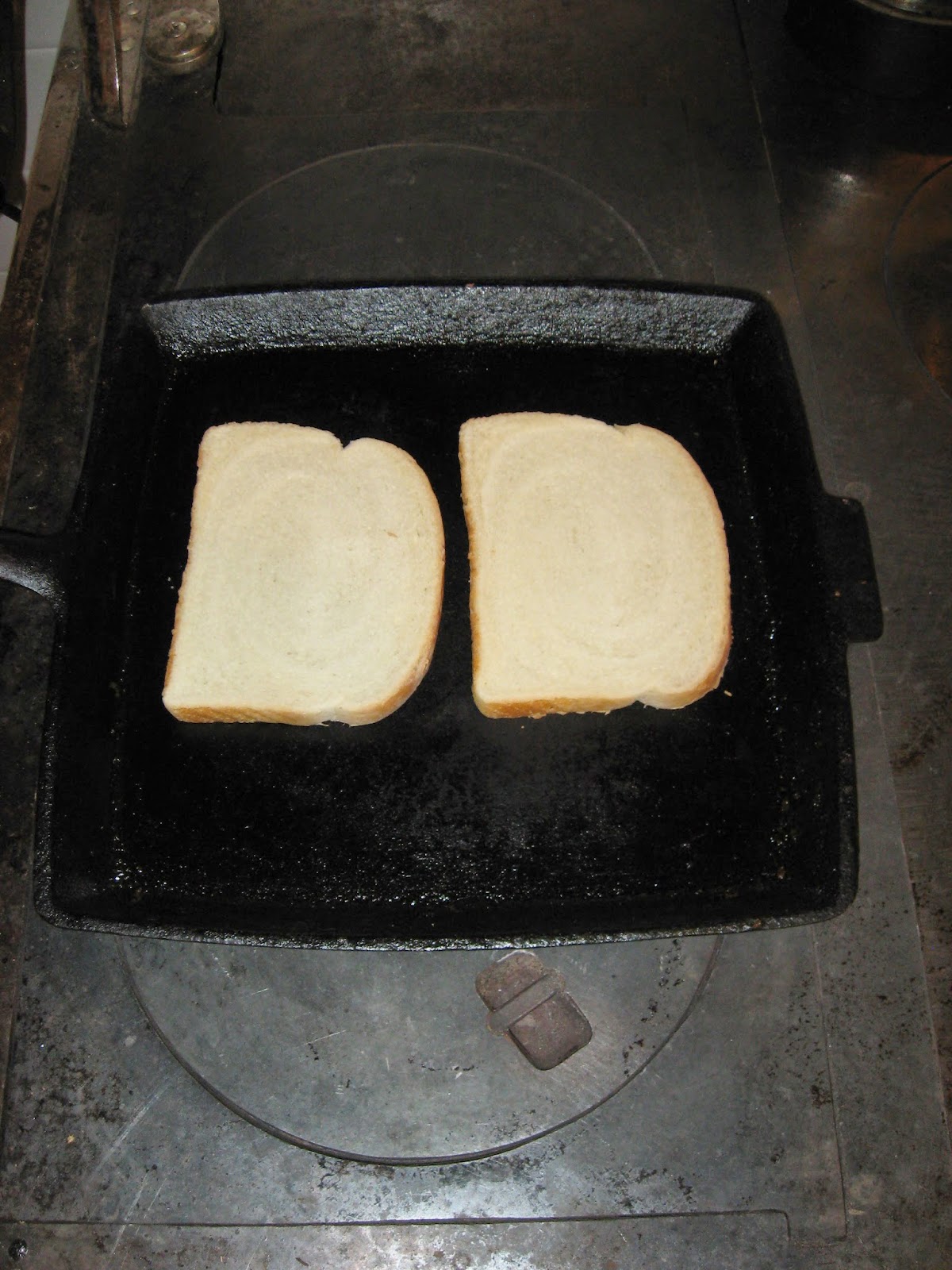 Watch carefully and turn the bread when it is toasted according to your preferences.


You can see that this method results in good looking toast.  I can't tell any difference between the flavor of this toast and that which comes out of the electric toaster.  This method doesn't take much time after the griddle is hot.
Method 5: Now, if you are going to spread a layer of real butter on your toast anyway, an extremely delectable treat is made using this method which is similar to the fourth one.
Using soft butter, spread an extremely thin layer of it on only one side of the bread.  Lay the buttered side down on the hot griddle.  Again, watch closely and turn as soon as it has reached the desired shade of brown.  Turn it over to toast the unbuttered side.


Method five results in toast with an amazing flavor, but since I usually spread light tub margarine over my toast, I don't do this often.  It is quite a treat, though, and the less butter you use, the better the flavor, in my opinion.  You just have to be sure that the thin layer of butter covers the entire side of the bread; otherwise, it browns very unevenly.

I guess I should say that there is a sixth method.  It involves putting the pieces of bread in an extremely hot oven (500 degrees or more) until it has reached the desired shade of brown, but I'm not going to try that because I slightly warped the steel bottom of the oven on the Qualified Range by getting the oven that hot, so now I try to avoid firing the stoves in that manner.

As with any cooking done on a wood cookstove, there are as many methods as there are cooks.  Please utilize the comments section below to share yours!

Email ThisBlogThis!Share to TwitterShare to FacebookShare to Pinterest
Labels: accessories, other uses of a wood cookstove, wood cookstove cookware