When I was little, my grandparents on my mom's side raised sheep.  Cattle were always their main focus, but they still had sheep around from when my aunt Cheri raised them during her 4-H career.  We even got in on it one spring when they had a bottle lamb that my grandparents thought we kids would enjoy taking care of.  "Linda the Lamb" came to live with us in a big cardboard box in the basement garage of the little house, and eventually she moved to a pen to the west of the driveway where a second garage now sits.

I raised sheep when I was in 4-H, too, and in fact, I didn't get rid of them until shortly after Nancy and I were married.  Thus, at various points in my life, lamb has been a common item on the menu.

Grandma Marian was a fantastic cook in her day, as I've mentioned several times on this blog, and when she served lamb, no one ever turned their nose up at it.  It was always delicious!  Of course, she wasn't using a wood cookstove by the time I came along, but that would have only improved the flavor.

Here is what she did:

1. Place the lamb roast in an enamel roaster that has a lid.  If you want, you can brown the roast in a little bit of butter over a brisk fire to begin with. Sometimes Grandma did this, and other times she did not.  When I cooked the roast in the pictures for this post, I did not brown it before putting it in the oven. 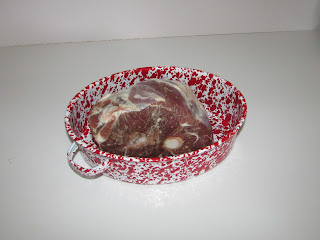 3. (This was one of her secrets.)  Sprinkle the roast with marjoram leaves. Whenever she cooked any kind of lamb, she insisted it ALWAYS be seasoned with marjoram.

4. On top of the marjoram, place several bay leaves.  She would always put bay leaves on a beef roast, too. 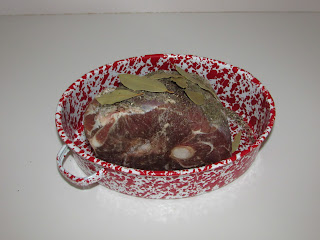 5. Then, she would drape the lamb roast in slices of bacon.  The bacon is the reason that one can get away with using less salt in step two above.  I operate under the premise that "Bacon and butter make everything better," and it certainly holds true in this case.  As my own addition, I sprinkle a little pepper over it all once more because I am very fond of peppered bacon. 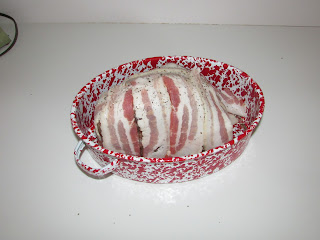 6. Put the lid on the roaster and put it in a moderately slow oven (about 325ºF) until it reaches the doneness you desire.  I prefer lamb roast to be well done.  In the picture below, I baked potatoes in the same oven for the same amount of time, and everything was cooked in a little over an hour and a half. 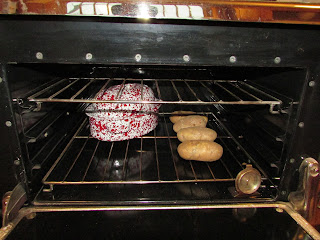 The roast and potatoes were accompanied with the broccoli that you see over the firebox at the left in the photo below.  The roast was very good, but the bacon was awesome! 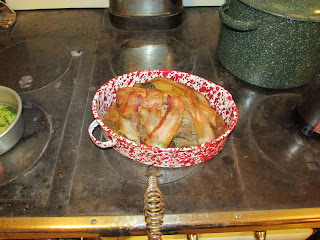