Monday was a big day at our place.  It was the first day in the last eight that I didn't have some kind of school obligation or other.  I was not scheduled to substitute, so I spent the whole day at home trying to get some things done.  While I was eating my lunch, my brother came in from loading out corn to find out if it would work to move the summer kitchen. Secretly, I had been hoping all morning that this would be the case, but he travels a lot since he is the First Vice President of the National Corn Growers Association, and his days at home are usually quite full as he catches up on farm work and other responsibilities.  Therefore, I didn't want to exert any pressure.  But, bless him, he took time out of his busy afternoon to organize and transport the necessary equipment while I vacated the more portable things from the inside of the building.

Originally, we put up this shed to operate a small bakery out of it at the end of our driveway.  After seeing how the Amish in southern Iowa have bakeries and little grocery stores on their farms, we thought that we'd like to try something like that.  Thus, back in the summer of 2009, we purchased this Tuff shed, finished the inside, installed the Riverside Bakewell cookstove, which I had had since the late 1990s, and began baking every Saturday that fall until it got so cold that the garden hose which supplied our running water froze.

We did an okay business that fall, and I learned A LOT.  Our biggest problems were that it was hard to sacrifice the time from our already busy weekends, and we never knew how much we were going to sell.  Some Saturdays we didn't have anything left by the evening; other Saturdays would see us with five or more loaves of bread that didn't sell.

We opened again the next fall, but it became a drag in a real hurry, and so ended that phase of our lives as custom bakers.  The "shed" as we called it, then became our summer kitchen, but because it was located a full 75 steps from the back door of the house, cooking down there was colossally inconvenient.  Couple that with the fact that the oven door broke during the family reunion in 2011, and you have all of the reasons that we just haven't used the summer kitchen all that much. 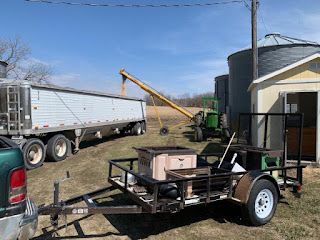 True confessions now: we didn't have a clue as to how to move a building. I'm not sure that I do yet, but Kevin is brave and adventuresome, and we accomplished the task! 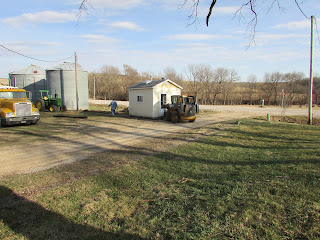 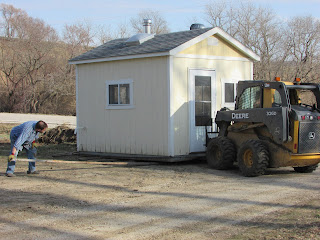 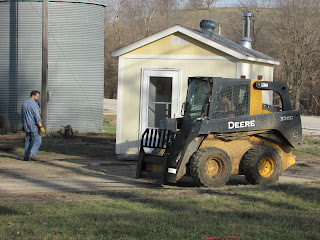 The summer kitchen now rests on a concrete pad north of the house where our old garage used to be.  It is only 11 steps away from the back door, and is actually very close to where the original summer kitchen/washhouse was on our farm.  Hopefully, this will mean that I'll use it more.

Noting that Sunday evening marked the end of March and that there are only a maximum of two more months that we will use the Margin Gem on a daily basis, I lamented to Nancy, "I already miss the cookstove."  She was in a different room; otherwise, I'm pretty sure I would have seen an epic eye roll in response.  But, now I can look forward to just switching to a different cookstove!

I'll keep you posted on the progress as we get the summer kitchen rearranged and in operation.
Posted by Jim at 3:10 PM