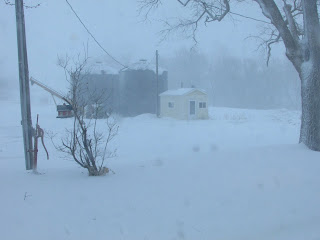 Nancy and I are sitting on our new reclining love seat watching Doctor Zhivago on Netflix while a blizzard rages outside.  The picture above was the view to the east of the house before it got dark and before the snow and wind got serious about their business tonight.

Prior to sitting down to watch the movie, I had a snack of caramel puffed wheat.  I haven't had this for perhaps two years, but I really enjoy it.  I think I was in high school when I was first introduced to this food by my grandma Marian.  I don't know what possessed her to make it at that time, but she said then that her mother, my great-grandma Gladys, used to make caramel puffed wheat for a snack when she was young.  Grandma Gladys cooked on a woodburning cookstove until they moved from their farm in Hazel Dell Township (the next township west of us) to their farm just south of Council Bluffs on 29th Avenue in 1941, but I don't know what her original recipe might have been.

The ironic thing about this is that when Grandma Marian first made this for us, she used a microwave recipe. I copied it from her so that I could make it while I lived in a dormitory at Iowa State University, and now I've adapted this recipe for use with a woodburning cookstove.  Lots of traditional recipes have been converted for use in a microwave, but perhaps this is the first time that a microwave recipe has been converted for the woodburning cookstove! 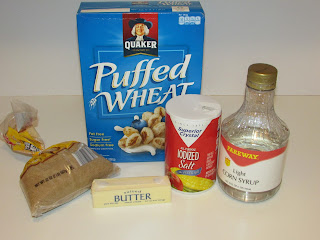 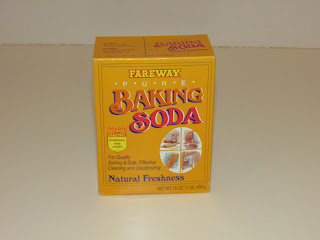 The first step is to build your fire, but don't get carried away.  You will need only a slow oven (between 200 and 300ºF).  In the Margin Gem, this is easily accomplished with a good bed of coals and a large chunk of wood. Your fire does need to be hot enough to boil your caramel syrup first, though.  Those of you who have been following this blog for any length of time will know that I consider this a great wood cookstove recipe because it uses the heat of the fire to complete the first step of cooking while the fire is heating the oven.

Combine the brown sugar, butter, corn syrup, and salt in a medium, heavy-bottomed saucepan.  Put this directly over the fire to come to a boil. 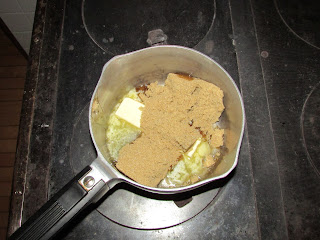 While this begins to heat, put the puffed wheat in an oven-proof metal bowl or roaster bottom.  I use one of my stainless steel bread bowls. 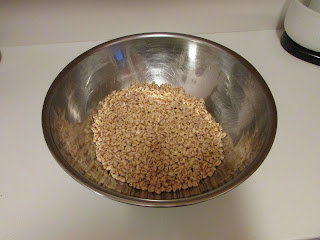 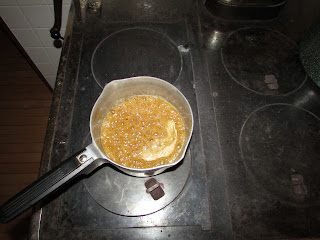 Once the full rolling boil has been reached, remove the syrup from the fire and stir in the half teaspoon baking soda.  The syrup will foam up. 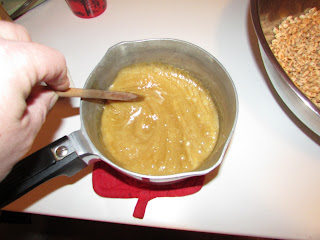 Pour the syrup over the cereal in the large bowl and stir it thoroughly. 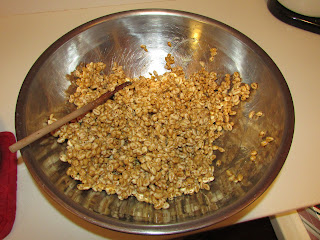 When the cereal is completely coated, slide it into the slow oven.  Bake for 35-40 minutes, stirring every ten minutes.  Baking the cereal is important because after you pour the syrup over it, it becomes distastefully chewy. Baking it makes it crunchy again. 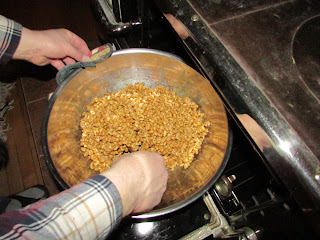 After forty minutes have passed, pour the hot cereal out on a jelly roll pan to cool.  As soon as it can be handled, break the cereal apart so that there are no large clumps. 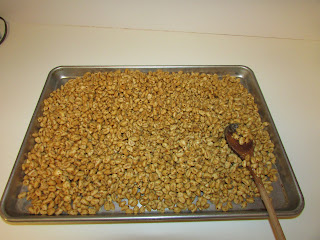 Store in an airtight container.  This will keep indefinitely.

This tastes a lot like Sugar Smacks, but without their characteristic burned flavor.  I'm sure you could eat them in a bowl with milk on them, but I never have.  Of course, the syrup and the method could also be used to make caramel popcorn.

Now, I know that many of this blog's readers do not cook on a woodburning range, so I will give you the microwave directions the way I originally copied them:

Cook the brown sugar, white syrup, butter, and salt for two minutes on full power.  Stir.  Cook for another two minutes.  Then stir in the 1/2 tsp. soda until foamy.  Pour over cereal which has been placed in a brown paper grocery sack.  Shake thoroughly.  Microwave the cereal in the paper bag for forty-five seconds on full power.  Shake.  Repeat these steps two more times.  Pour out to cool.

I hope you enjoy this one!