Another Use for the Warming Oven: Softening Crystalized Honey

You'd think that after using a wood cookstove for almost twenty years that I wouldn't very often run across a new trick.  But no, I'm continually amazed by the versatility and usefulness of these ranges.

My latest new discovery is that the warming oven is a great place to soften honey which has crystalized.

Honey crystallization is a very natural process, and will happen to all honeys eventually.  However, it is inconvenient when you want to use honey in its liquid form.

The honey that you see in the picture below was purchased from Van Sickle Bees, a local honey producer.  It originally came in one of those plastic bear-shaped containers, but I put the honey in a mason jar because I was worried that the floor of the warming oven would get too hot and melt the plastic. 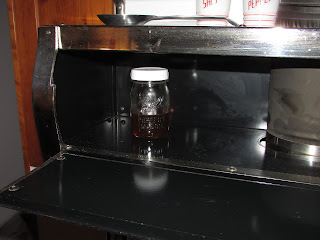 After a while in the warming oven, the honey returned to its liquid state. Once the honey has re-liquified, you want to let the honey cool to room temperature slowly so as not to encourage it to crystalize again.

Don't be tempted to leave the honey in the warming oven because continued exposure to high temperatures will break down the nutritive value of the honey.

Now we know another reason wood cookstoves are great appliances!

Email ThisBlogThis!Share to TwitterShare to FacebookShare to Pinterest
Labels: Margin Gem, other uses of a wood cookstove, warming oven