One of the things that I enjoyed the most about my time spent as a local banker over a decade ago was that if I had a question about anything, all I had to do was wait until the right customer came in, and I could get the answer from an expert.  I learned about chuck wagon cooking from a lady who had grown up in Cherry County, Nebraska, for example.  Another lady taught me about potato salad dressing made with sour cream.  I was schooled in our community's history by many older ladies and gentlemen, and I was taught the genealogy of most of the other "old guard" families in our area.

Another thing that was great fun was the fact that several of the older women in the community would bring us various types of food.  Among the things I remember were buttermilk cake, prune pie, rhubarb jam, whole wheat bread, and ginger cookies made from the recipe that I'm going to share with you.

Lavon was one of the prettiest elderly ladies that we waited on.  My grandmother had known her as one of the older girls when she was growing up in the township to the west of ours, and she had always remembered her as being extraordinarily beautiful in her youth, too.  One day shortly before Christmas, Lavon brought us some of the ginger cookies that she had always made for her family for Christmas.  She was in her late eighties or early nineties by that time, and she talked about how she had skipped making them one year because they were getting to be a lot of work for her.  A grandson complained so loudly, however, that she had resumed baking them while she still could.  She told me a little about the process of making the cookies, and I asked if she would share the recipe.

A few days later, she brought in a copy of the recipe in her own handwriting with notes scrawled in the margin, and it was the dearest gift she could have given.  I've scanned it so that you can see it below. 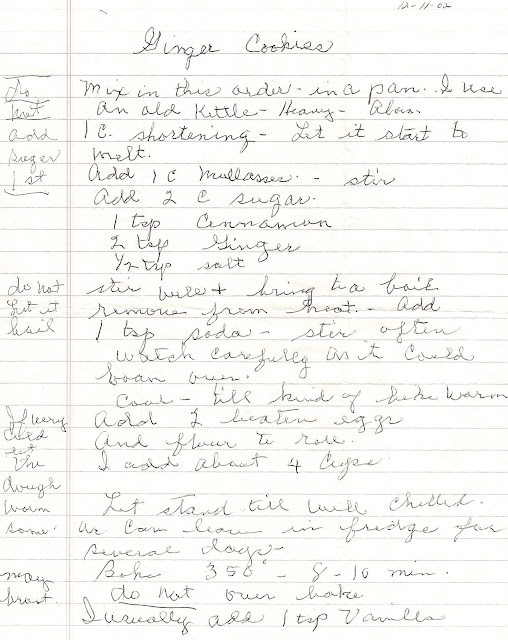 This is a very old recipe, but they are truly delicious cookies with an old-fashioned flavor that just can't be beat.  They also keep beautifully.  I will confess that the first time I made these, I had so many Christmas cookies and sweets that I didn't get these frosted in time for Christmas.  In the holiday hubbub, I forgot about them in a tin on the dining room hutch.  I'm embarrassed to admit that it wasn't until summer vacation that I discovered that they were there, and they were just as fresh and tasty as they had been in the beginning.  I frosted them and enjoyed them perhaps more than I would have at Christmas.

Since Lavon's handwriting is a little difficult to read due to the arthritis and poor eyesight which affected her in her later years, I'll translate for you.

In a heavy, large kettle (the Magnalite kettle that you see in the pictures below is a 5-quart Dutch oven), place 1 cup shortening.  Put this on the fire and let it begin to melt. 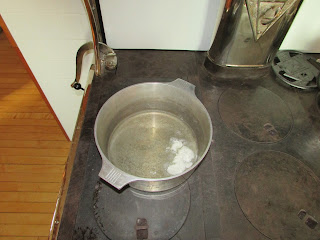 Add 1 cup of molasses and stir. 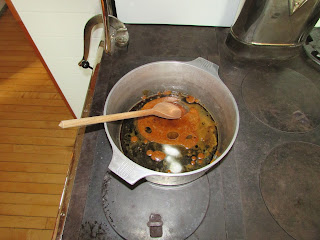 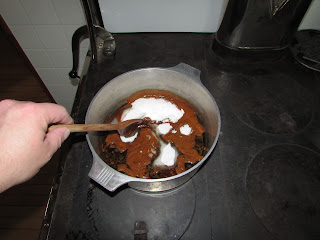 Stir all of this together well and bring it to a boil. 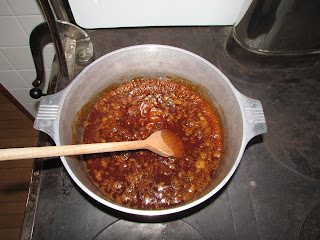 Once this mixture boils, remove it from the fire immediately.  One of Lavon's notes in the margin warned to not let the mixture continue to boil.  I'm sure that this is so that the sugar doesn't begin to work toward soft ball stage.

Once the mixture has been removed from the fire, add 1 tsp. of baking soda.  Stir this in and watch carefully since it could foam over. 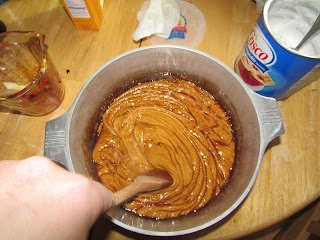 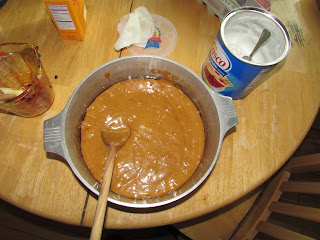 This part is really fascinating to watch.  Once it appears to be done foaming, let this mixture cool until it is kind of lukewarm. 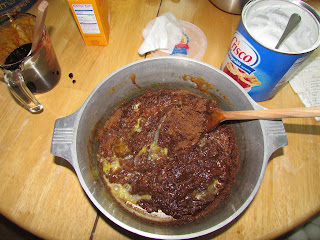 Then add enough flour to make a dough that will be able to be rolled out after it has been chilled.  Lavon said to add four cups of flour, but I find that more is necessary. 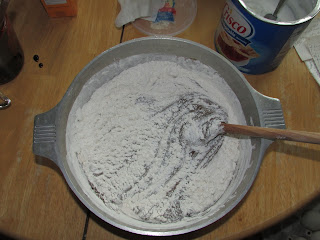 Let the dough stand in the refrigerator (or on your cold back porch) until well chilled.  Lavon said several hours or several days would work.

Roll out the dough and cut it into desired shapes.  I use a gingerbread man cutter, but the cookie that Lavon brought us was a star. 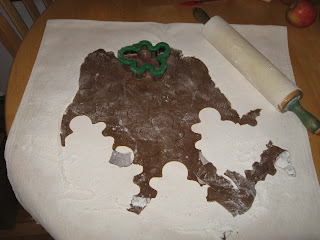 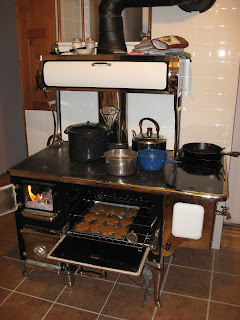 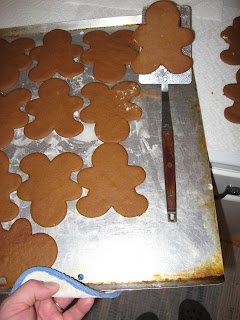 Lavon frosted these with a thin powdered sugar glaze, but my sweet tooth prefers a thicker frosting.  Either way, these are a very enjoyable old-style cookie.

I hope you all have a Merry Christmas.  We were supposed to have 1-3" of snow this morning.  It looks to me like we've had somewhere over 6", and when it comes on the day before Christmas, it couldn't be more perfect timing.  Remember that the birth of our Savior is the reason that we celebrate at this time of the year!