The Cookstoves at Living History Farms

In mid-June, Nancy and I visited her sister Susan in Southeast Iowa.  We left Susan's early on a Wednesday, and arrived that morning in the Des Moines area.  We had lunch on the Des Moines Skywalk System, and then we visited the Salisbury House in the afternoon.  The next day we visited Living History Farms in Urbandale.

Living History Farms is a 500-acre working museum which includes three farms--a Native American camp, an 1850 pioneer log home/farm, and a 1900 farm.  It also includes a town which is set to appear as it would have in rural Iowa in 1875.

Of course, my favorite part of the whole Living History Farms experience is seeing the woodburning cookstoves that are in use at the museum.  Three wood cookstoves are in regular service, and I took the opportunity to photograph each of them in order to include them here on the blog.

The first cookstove that we saw was in the Tangen Family Home.  This house is part of Walnut Hill, a fictional Iowa town set in 1875.  "Mr. Tangen" is the town implement dealer, so his house reflects a certain affluence, though it is not a mansion.

The cookstove in the kitchen is a Crawford.  From what I have been able to learn, Crawford ranges were made by Walker & Pratt in Boston, Massachusetts.  I'm sure that this range was chosen because it reflects the time period as closely as possible, but I'm not sure that a range from Boston would have made it all the way to Iowa in those days. 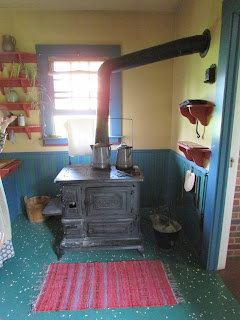 This stove had some unique characteristics.  The first picture below is of the firebox.  It was pretty standard.
What was unique was that a few inches below the firebox there is a second dump grate.  I have never seen anything like that.  I wonder whether the stove was designed to have a summer (upper) grate and a winter (lower) grate like the Heartland Oval stoves.  Another theory I had was that maybe the secondary grate was used to collect clinkers when burning coal.  If someone who reads this post knows why the stove was designed this way, please utilize the comments field to educate me! 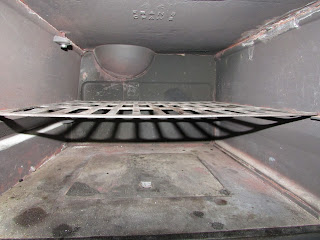 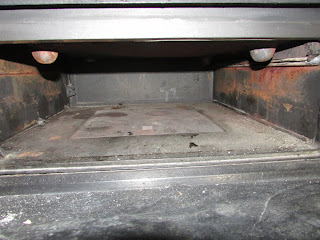 The picture below shows the oven dampers and oven cleanouts on the right side of the range. 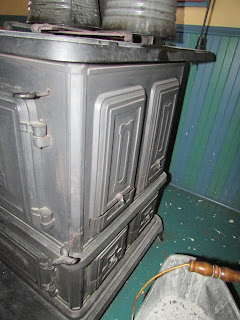 The second cookstove that we saw was in the Flynn House.  The historic interpreter who visited with us about this stove said that originally a house of that size would have had a larger cookstove, but again this one was chosen because it was accurate for the time period of the house.  It is also a Crawford with a warming oven across the bottom, but its design was less unusual. 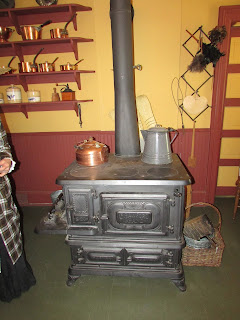 Nancy and I breezed through the 1700 Ioway Native American Farm and the 1850 Pioneer Farm because they don't have cookstoves, and hurried to the 1900 Farm where the beautiful Acorn cookstove presides over the dining room.  Living History Farms has its own excellent blog entry about this cookstove, which I think says it all. 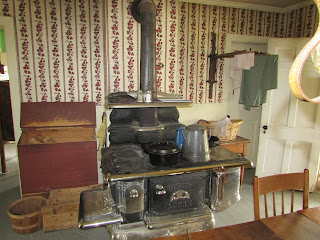 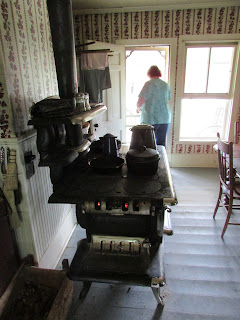 Unfortunately, the usual historic interpreter at the 1900 Farm house was not at work the day we were there, so I didn't get to visit with her.  I did however, spend some time visiting with historic interpreter Lucy O. at the Tangen Family Home.  Lucy has cooked on all three of the cookstoves in use at Living History Farms, and she is definitely a "cookstove kindred spirit."  Talking to someone who knows exactly what I mean when I wax poetic about wood cooking is so much fun.

I told Lucy that the last time I had been at Living History Farms was in 2001, and at that time, the historic interpreter at the Tangen Family Home had told me that she didn't much care for the Crawford cookstove there, but said "I can cook anything on the Acorn at the 1900 Farm."  I asked Lucy if she agreed, and she said that she actually preferred the Crawford.  She thought the reason might be because she'd had more experience with the Crawford, but she also liked having the warming oven beneath the oven.  She said that the warming shelves were just not as effective at keeping things hot when they were finished cooking.

I told her that I could certainly identify.  After having only a high shelf on the Qualified, the warming ovens on the Riverside Bakewell and the Margin Gem were a welcome addition.

I said above that Lucy was a "cookstove kindred spirit."  She agreed with me that she would rather cook over wood than any other fuel.  She also told me that she is a newlywed, and she has made a deal with her husband that if she ever leaves Living History Farms, she will get her own woodburning cookstove, and he will get really good at chopping wood!  I tell you, folks, there is just something about woodburning cookstoves that gets in your blood!

If you're ever in central Iowa, I would highly recommend at trip to Living History Farms.  Their website is http://www.lhf.org/ so that you can take a look at all that they have to offer.
Posted by Jim at 8:19 AM