The Stove that Started It All

I credit my great-great-aunt Meme﻿ with getting me interested in woodburning cookstoves.  Born in 1895, she was in her eighties by the time I was born, but she was still walking beans (for those of you who are too young or from an urban background, that is what we called it when people walked the soybean fields in order to hoe or cut the weeds in the days before herbicides made this practice obsolete) and keeping very active.  She was my maternal grandfather's aunt and grew up on the farm where my grandmother, brother, and cousin all make their homes today.  My grandfather was both an only child as well as an only grandchild since Meme and her sister never married.  Meme expended all of her motherly instincts on my grandfather, in many ways becoming much closer to him than his own mother was.
When my mother's generation was growing up, it always felt to them like they had an extra grandmother because Meme was very much a part of the family at all times.  With her great-nieces and nephew she did things like take them to see Mary Poppins when it first came out in theaters, but by the time I came along, her driving days were numbered, so the majority of the time that I spent with her was in her apartment, where we played together and she started baking cookies with me very early on.
As I mention in the "About Me" column beneath the labels index on the left, Meme and her sister had been given a toy wood cookstove when they were young.  She reminisced about how the two of them would collect small sticks in the yard and burn them in the stove, baking tiny pies in the oven and cooking small pots of things on the top.  Eventually, Meme's sister-in-law (my great-grandmother) convinced her to give the stove to some cousins to play with.  During that time, several of the stove lids were lost, a frying pan handle was broken, and the long stovepipe extension went AWOL.﻿  Meme always indicated that she saw the stove on a visit to their house after the children were grown, and she was heartbroken to see it in such a state of neglect, so she asked for it back.  Her wish was granted; she brought it home and cleaned it up, using baby food jar lids to replace the missing stovetop lids.
Thus, it came to be that I always played with it while visiting her.  She left her home on Grace Street in 1977, and I remember playing with it on the living room floor there, so I had to be very young when I started enjoying it.  Once she moved to her apartment, my sister and brother and I spent countless hours in the second bedroom, which she had fitted up as a sort of sewing/play room, "cooking" buckeyes, acorns, and some other nut that I haven't been able to identify.
The enjoyment of this toy stove was compounded by the fact that Meme's last real-life cookstove reposed comfortably in the summer kitchen out on the farm.  I made frequent forays into the dilapidated old building to gaze at the beautiful Monarch range with its rusted nickel trim and white enamel panels.  When I was in high school, I even re-blacked it in an effort to keep the rust in check so that I would be able to use it when I got my own home.  Sadly, some unidentified reprobates burgled it while I was in college.
At any rate, imagine my surprise while I was cruising e-bay and ran across another toy stove exactly like Meme's!  I've seen many toy and salesman sample stoves over the years, but this is only the third one of these that I have seen.  You can visit the ebay auction here.  The photographs that go with the entry are quite inclusive, so I want to document them here because this truly is the stove that started my fascination. 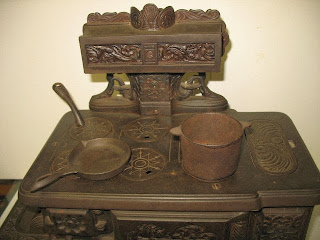 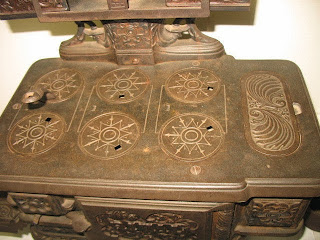 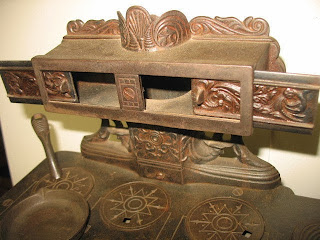 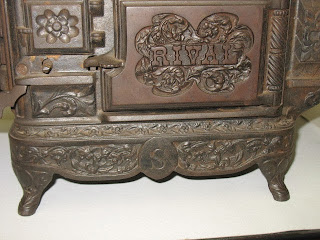 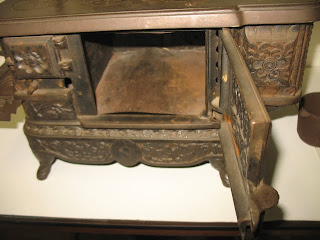 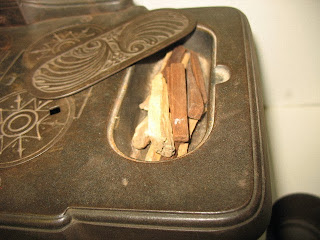 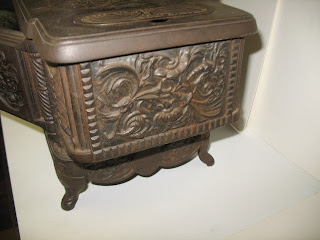 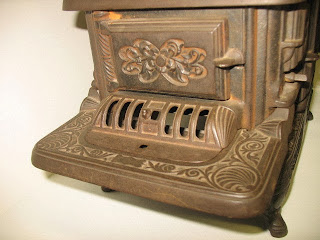 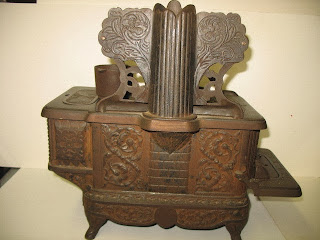 Looking at these pictures brings back the memory of many happy hours spent with Meme.  Goodness knows how many "meals" of buckeyes she pretended to eat for us.  While she attended our dinners or patronized our imaginary restaurants, she would recall the days when she and her mother cooked on the Monarch cookstove.  She would vehemently deny that she had romanticized wood cooking for me, but she did.  I remember telling her as a little kid that I wanted to cook on a real wood cookstove someday.  She told me that she thought it was silly and would then talk about the days when they couldn't start a fire due to poor weather conditions and chimney draft problems, but I was already hooked.
I can't justify spending the money on the price listed on this "buy-it-now" auction, but I sincerely hope that whoever the lucky buyer is gets just a fraction of the enjoyment out of this stove that Meme's stove brought to us.