If you read my last post, you saw the picture below of a wheelbarrow full of summer fuel: sticks, corn cobs, bark, etc. 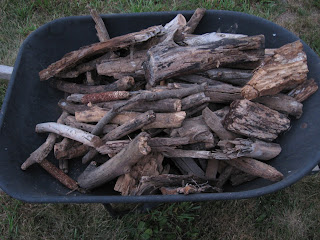 Most of this particular wheelbarrow full of fuel was just bits of wood that I had picked up here and there around our farm, the rest was contributed by my dear grandmother from what she picked up around her farm.

I want to tell you what just half of this fuel did last Saturday.

1. Cooked our casserole for noon dinner (a new recipe that I copied out of a magazine in my doctor's office while I waited for my bi-annual cholesterol maintenance appointment--which, by the way, went very well despite the bacon grease that I put in my potato soup).  This new casserole recipe had approximately 75 minutes of stovetop cooking time before it was put in a moderate oven for another 20 minutes.  Thus, it had a total of over an hour and a half of cooking time.  We didn't like it, so you won't see the recipe on the blog.

2. Sauteed zucchini from my sister-in-law for our vegetable side dish.

3. Baked a pan of from-scratch buttermilk biscuits made with buttermilk from our cow Bonnie.  As soon as the casserole was finished baking, I put it into the warming oven, threw a pile of little sticks on the fire and brought the oven up to over 400 degrees for the biscuits.

4. Boiled and canned three and a half pints of pancake syrup made from the drippings that we catch from beneath the caramel sticky rolls baked for the Monday Markets.  (I think that this is a great way to save on the expense of sugar.)

6. Heated water in the teakettle and reservoir for washing the canning jars and a few other dishes.

7. Heated enough hot water to meet all of our needs for the rest of the day, including a nice hot shower for me before we went to town.

Yes, that's right, all of this on half of the pile of sticks and cobs and bark which could have easily been left to rot where they were!

You see--here is the soapbox part--having a wood cookstove allows a person to take what would often be considered trash and use it productively and efficiently.  It's just one of the many aspects of owning a wood cookstove that I consider extremely advantageous.

I just wanted you all to know about that.  Thanks, I feel better.

P.S. Don't worry.  I know about the scientific evidence available on the importance of rotting wood as habitat and food source for all manner of flora and fauna which are necessary in balanced ecosystems.  Rest assured, no ecosystems were irreparably harmed in the above activities.  We have PLENTY of rotting wood around here!

P. P. S. The other half of the fuel in the picture above was supplemented by some split pieces that you saw in the winter fuel picture to cook potatoes for our dinner while we were gone to church on Sunday morning, to make another new casserole (also not very good), and, of course, to heat water.  I did get another partial wheelbarrow of summer fuel later on Sunday afternoon to keep the stove going in order to bake three batches of cookies to sell today at the Monday Market.  Efficiency, efficiency!