Even though we've had a couple of hard freezes, the broccoli plants in our garden have begun to produce in earnest since we've had several nice rains lately.  We both love broccoli cooked, raw, or in casseroles, so we're happy for the late harvest.

We've canned broccoli before.  While it isn't the prettiest canned vegetable to look at, it is quite convenient to be able to open a quart jar, drain the water off, and have broccoli that is already defrosted and ready to be stirred into a couple of our favorite 70's era casserole recipes.  Thus, we decided that we would pick what is very likely the last broccoli of the 2012 growing season and try pressure canning on the Marjorie the Margin Gem for the first time.

I also decided to take this opportunity to try using Tattler reusable canning lids for the first time.  We had bought a trial box of these lids when we were at The Dutchman store in Cantril, Iowa, back in June, but I had completely forgotten about them while we were canning during the summer.  We buy our canning lids in bulk sleeves from the Amish stores down in Redding, Iowa, at very reasonable prices, but if we could reuse them indefinitely, that would be quite a savings in the long run.

After picking the broccoli, we soaked it in salt water to wash it and draw off any insects.  Surprisingly, a few tiny bugs did surface despite the chilly weather.

Then, I placed the canner over the fire and scalded the Tattler lids.

We trimmed the broccoli and cut it into the size pieces that we want; then, we packed it fairly tightly into quart jars.

We put the lids on the jars, loaded them into the canner, and put the lid on.  The canner exhausted for approximately ten minutes.  I covered the petcock with the weight, and "the dance" began.  The following pictures are posted in chronological order, showing how many different positions the canner had to be in in order to reach and maintain the approriate amount of pressure for the appropriate amount of time. 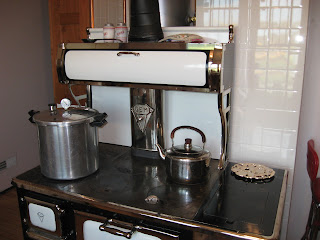 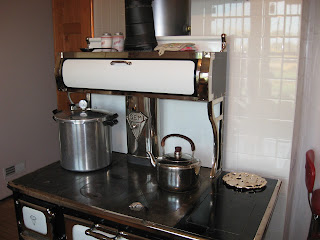 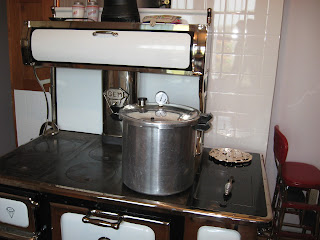 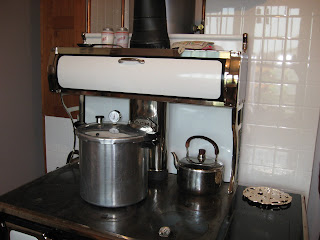 There were a few other positions that I didn't snap a picture of, but these pictures show the general progression.  I did not fuel the fire while the canner was maintaining pressure, but it would have been best to have added only small pieces of wood so as not to run the risk of cooling the fire too much while waiting for a large log to ignite.

Once the processing time was finished, the trivet that you see resting on the reservoir in the pictures above was moved to the ledge on the kitchen cupboard, and the canner was placed there to cool.  Remember, a pressure canner has to be completely removed from a woodburning range in order for the pressure and temperature to drop at the correct speed.

As you can see, the canner had to be moved around a lot more in this canning session than in the one that I photographed for my original post about pressure canning on a wood cookstove.  Keep in mind that there were several differences, though: six pints/seven quarts, different canner, different stove, different processing time, and different weather conditions.  Even with the increased movement of the canner in order to maintain constant pressure, I don't really think that I adjusted the canner's placement any more frequently than I would have adjusted an electric or gas burner.

All went well, and every jar sealed.  I'm anxious to see how well the seal holds and how difficult they are to get into without damaging the rubber ring.

A) The directions on the Tattler box simply say: "When jars have cooled, remove metal band and determine by feel if lids are securely sealed."  Tattler lids don't make that familiar "ping" sound when they seal.  However, before sealing, the lids have an obviously convex curve to them.  When they are sealed, they are noticeably concave.

B) Nancy finds the odor produced while canning broccoli particularly offensive and likens it to the odor of dead mice.  I have to admit that it isn't the most pleasant smell, so consider yourself fairly warned that this may not be an activity you would want to complete before having a house full of company--unless, of course, you don't particularly like the company that is coming and hope that they'll either leave in a hurry or think twice before coming again.
Posted by Jim at 8:30 PM