Use of the Warming Oven

In her comment on my post entitled "Little Things Mean a Lot," reader Tracy asked for more information about warming ovens.  I felt that I needed to do some more research and photography before I could write a quality post about this wonderful feature of the woodburning cookstove, so I'm tardy in replying.  So at long last, here is my reply.


Terminology
First, a little background information about warming ovens.  I often see places on the internet where people mistakenly refer to the warming ovens on cookstoves as "bread warmers."  I'm going to show you just how judgmental I can be sometimes and admit that when I see someone refer to warming ovens as bread warmers, I immediately figure that they know little about cookstoves.  The only other accurate names for warming ovens that I have seen or heard with any frequency are "warming closet" or "high closet."  I'm sorry to get so technical on what to call these features of the woodburning range.  It's just that they are so versatile that limiting them with the term "bread warmer" just doesn't cut it.


Location
As you can see from the pictures below, the warming ovens on both of the stoves that I use are above the cooktop.  This is the most common location for warming ovens; however, I know that in the past, some models of Home Comfort ranges and Monarch ranges had additional warming ovens below their baking ovens.  Our Qualified range had only a high shelf above its cooktop, but it did have a storage drawer beneath the oven which could have been used as a warming oven.  Depending on the style of range, the stove pipe may extend through the center of the warming oven; otherwise, it usually makes its vertical trek just behind the backsplash and warming oven.  It seems to me, though, that the position of the stovepipe has little to do with the temperature of the warming oven.

Dimensions
﻿
It is quite rare to find any information in advertisements, catalogs, or the Internet about the size of warming ovens.  Dimensions for warming ovens apparently are not considered selling points for woodburning ranges, and apparently this was true historically as well.  Thus, all I can do is provide the measurements for the two warming ovens which are in use here at our home.

The Riverside Bakewell's warming oven is about two inches deeper on the bottom than it is on the top.  This design causes the familiar backward slope to the warming oven doors and is responsible for the fact that they stay closed without any kind of latch.  The bottom depth measurement is more important than the top because the bottom is where you would place things.  The Riverside's warming oven measures 36" W x 10" D x 8-1/4" H.﻿


Uses
Hmmm.  Where does one begin?  Something tells me that this won't be my last post about warming ovens.  Of course, the warming oven is the perfect place to warm cold plates and serving dishes before serving a meal, but this is just the beginning.  The first two pictures below show cooked (or partially cooked) foods keeping warm while other parts of the meal or entree are being prepared.  This is also a common use of the warming oven, and it is particularly convenient if you are the sort of cook who has difficulty getting every part of a meal to be done at the same time. 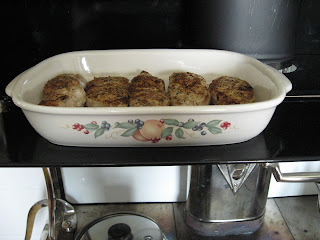 The next picture shows loaves of bread rising on the open door of the warming oven.  The warming oven would be too warm for bread to rise if the door were shut, and the capacity would be severely diminished, too.  Actually, since this picture was taken, I have been doing a lot of baking for the Monday Markets, and I now always put a bath towel down on the open warming oven door beneath the loaves of rising bread.  The inside surface of the warming oven door gets quite hot when the door is open and nothing is on the cooktop to block the heat radiating from it, and it was too hot for the bread dough.

Of course, the dry heat of the warming oven also creates a perfect place for drying bread for making bread crumbs.  In the picture below, several slices of bread are resting in a pan to dry out in the warming oven.  After they were completely dried, I popped them in the food processor and created finely textured, delicious bread crumbs that later became the breading for homemade onion rings.

The temperature ranges listed above are within the range that are recommended for food dehydrators, so I'll be trying to dry other foods in the warming oven in the future.  Has anyone out there tried this?


Another convenient function of the warming oven is heating canning jars before they are filled with
hot food to be canned.  Having the jars hot before putting hot food, boiling water, or bubbling jellies and preserves in them prevents the jars from breaking due to the rapid temperature change of putting hot food into cool jars.


I have discovered that the warming oven is also the perfect place to soften butter.  I've learned to be careful, though.  If the butter is in a bowl that is making direct contact with the floor of the warming oven, it can become a puddle in a hurry.


For some frozen foods, the warming oven is a great place to defrost.  I think this is why Susan from Stoves and More Online calls her warming oven her "Amish microwave."  I'm naughty, of course, so I've actually defrosted meat in the warming oven.  I'm sure that any food science expert would tell you that I shouldn't do that.  More frequently, I use the warming oven to defrost our homemade applesauce (packaged in our chic freezer containers which were originally margarine, whipped topping, cottage cheese, or sour cream cartons) which I don't think presents any significant danger.  I put the containers on a plate to buffer the high heat of the floor of the warming oven as well as to catch any condensation from the outside of the container.


As you can see, the warming oven of the woodburning cookstove is an extremely versatile piece of equipment.  I imagine that as colder weather sets in, we will discover even more uses for this ingenious feature of the cookstove.

One last note: The temperatures that I have recorded for the warming oven are exactly in the range of temperatures offered by the modern warming drawer, which has become a feature of today's upscale home kitchens.  Online prices for warming drawers range from right around $900 to an eye-popping $1599!  Yes, these electric conveniences offer the user more precise control over the temperature, but their capacity is fairly comparable to the warming oven, and I can guarantee you that the extra charge for having a warming oven on the Margin Gem instead of a high shelf was not $900.