I had started writing this post several weeks ago.  Those of you who keep up with this blog regularly will remember that I mentioned that I had made strawberry preserves in my June 2nd post about water bath canning on a wood cookstove﻿.  However, I had only taken two photographs of the process and decided that they were not enough to make a quality post.

Well, one thing and another happened after that.  First, it got quite dry in our section of Iowa for a while (Thank you, God, for the recent rains!), and all of my June-bearing strawberries decided that it felt way too much like July to continue bearing fruit.  Thus, I was hoping to collect enough berries from my everbearing strawberry patch to make another batch of preserves and get better photos.  It was looking good until one of my cows got out and visited the strawberry bed.  Apparently, if you are a cow, the foliage of a strawberry plant is every bit as tasty as the fruit.  The strawberries appear to me like they will come out of their bovine-induced trauma, but it is going to take a while.

Actually, our little town started what we call Monday Market, so Nancy and I (and last Monday our mothers, too) baked up a storm on both functioning cookstoves.  We took with us several loaves of bread, some pies, some cookies, and some angel food cakes, and sold all of them within the first forty-five minutes that the market was open.  Now we are figuring out ways to be able to produce more, and thus we bought strawberries (GASP!--so not the same as what you grow yourself!) in order to sell some strawberry preserves.

The strawberry preserve recipe that my family has always used is attributed to my great-grandma Ruth.  In our family, she remains a legendary cook, even though she passed away twenty-some years ago.  There were two large strawberry patches on our farm when I was growing up, and I can remember strawberries being sent to Grandma Ruth's house so that she could make the preserves for us.  That was in the late 1970s.  By the 1980's my mother was coping with huge amounts of strawberries pretty much by herself, but with the occasional help of my grandmothers.  We kids, of course, were pressed into service to pick them, and we were taught early-on the value of letting strawberries ripen on the vine.  The large berries were frozen whole and would appear as side dishes, in salads, or as topping for ice cream and cake at our family birthday parties.  The small, scrubby ones were relegated to the preserve kettle, but they were enjoyed just as much.

One of my favorite summer memories from my childhood has to do with these strawberry preserves.  On the morning after we had picked strawberries, Mom would get up early in the morning to cook the preserves while the house was still cool.  Until you have smelled these preserves cooking with real, homegrown, vine-ripened strawberries, you cannot appreciate how wonderful it was to wake up to a house filled with that heady aroma.  I can remember my nose practically dragging me down to the kitchen, plopping me into a brown vinyl kitchen chair to wait anxiously for a piece of toast slathered with this red nectar.

While I was in junior high, Granny got a wild hair and decided to move the strawberry beds, but the result was disastrous.  I tried to salvage and restart them several years ago but had no luck.  Then my sister Janet, bless her, made some of these preserves from strawberries that she and her husband raised at their home in northern Nebraska.  She was present when I got a taste of them at my parents' home, and she got to see what I'm sure was a look of ecstasy on my face as I was transported back in time twenty years.  Seeing the opportunity to give me ONE OF THE BEST CHRISTMAS GIFTS EVER, she gave me a whole pint of these preserves that year for Christmas.  This got me inspired.  The next year, Nancy, her dad, and I put in three raised beds, and we now have strawberries again.
That is, until drought and Houdini cows hit them.

Anyway, these strawberry preserves are for those who want an intense strawberry taste.  I have a friend who was just starting to learn to can several years ago after she had begun to be a successful gardener, and she had made strawberry jam using the recipe that comes in the package of Sure-Jel.  It was good, she said, but it didn't taste sufficiently "strawberry-y" for her.  I gave her this recipe, and she was delighted with the results.  Here is what you do:

1. Wash and pare three cups of strawberries.  If you have to deal with those freakishly large, nearly tasteless, usually barely ripe blobs that are sold as strawberries in grocery stores like I did, cut the berries into half-inch pieces.  Put the berries into a bowl and pour two cups of sugar on them.  If you have sufficient strawberries, you may double the recipe, but DO NOT DO MORE THAN A DOUBLE BATCH AT A TIME!  I don't know why, but it doesn't work.  Trust me on this one.

Note to sister-in-law Susan: It dawned on me several days after we got home that this is why the first batch of preserves that I made at your house was not as good as the second.  The first kettle had four batches in it.  I had been told not to do that years ago, but I forgot it.  Sorry!

2. Grandma Ruth recommended putting them in the refrigerator overnight to let the sugar draw the juice out of the berries.  I just put a plate over the bowl and left them on the counter in the kitchen because I knew that I would be getting back to them this evening.

3. Once the juice has come out of the strawberries, in a thick-bottomed pot bring the juice and sugar mixture to a boil as quickly as possible, stirring occasionally.  Of course, on the cookstove, this is accomplished by putting the kettle over the firebox and having a brisk fire burning in the stove.  I would not recommend removing the lid from the stove and cooking this directly over the fire.  The amount is not so large as to make that necessary.  In fact, if you are not doubling the recipe, don't use a kettle that is larger than five quart capacity either.

4. Move the boiling preserves to a cooler part of the stove where they will continue boiling but very gently.  Because I had a pretty hot fire going to bake a double-crusted strawberry pie, I initially had to move the preserve kettle all the way over to the right edge of the cooktop.  Then, as I let the fire cool, the preserves had to be moved back closer to the fire.


5.  If you are going to waterbath can them, this is the time when you would put your canner over the fire to heat and get your lids into the hot water to soften the sealant.  This recipe also freezes well if that is your preference.

6. This is where things get tricky.  There is no set amount of time that these preserves have to cook like in conventional jelly making with pectin.  You can test for doneness in three ways: a) see if the juice sheets off the spoon like in the pictures in the Ball Blue Book, b) put a couple of drops of the juice onto a plate which has been in the freezer.  If after coming into contact with the plate it is the consistency you desire when you scrape it off with your finger, it is done, or c) look to see whether the strawberries are "glassy" since that is another indication of doneness.  The last method is the one our family prefers. 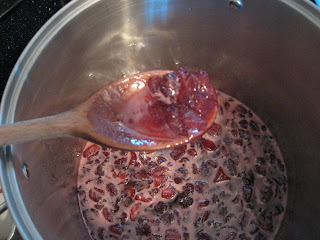 7. Remove from the stove, and stir down the foam as much as you can.

8. Pour into jars, adjust lids and bands, and process.  (Again, I used room-temperature jars and let them boil for over ten minutes.)

As it is summer and I didn't want any more heat in the house than was necessary, I opened the oven damper as soon as the canner had come to a boil.  I knew that the fire under the canner was more than sufficient to keep it at a full rolling boil, and I wanted to let as much of the extra heat go up the chimney as soon as possible.

A couple of notes if you are dubious about the lack of an exact cooking time:

If the preserves are cooked too long, they will be very thick and difficult to spread, but I think you could dilute them with a little water while heating them and remedy that.

If the preserves are not cooked long enough, they will be runny, but they would be outstanding as ice cream topping!  However, you can actually put them back on the stove and cook them longer after they have cooled so that you can get them to the right consistency.

Email ThisBlogThis!Share to TwitterShare to FacebookShare to Pinterest
Labels: canning on a cookstove, canning on a wood stove, strawberries, vintage recipes