As I look over this blog, I notice that many of the recipes which I have included here so far are for sweets and desserts.  In my experience, most general cookbooks and recipe boxes reflect this lop-sided phenomenon, but I think that it is because many cooks simply put the nutritional part of their meal together according to their own taste and do not rely on recipes for the standard fare of a meat, a staple, a vegetable, and a fruit.  At least, that is certainly what happens for most of the meals in our household.

My grandma Marian is no exception to this rule.  For all of her married life, she routinely put huge dinners on the table at noon--first for her family and in-laws; then for family and the occasional hired man; and then for family, the occasional hired man, and a growing pile of grandchildren.  However, no written recipes exist for the succulent beef roasts, heavenly mashed potatoes, delicious fried chicken, creamed carrots, mouth-watering sweet corn, and various other midwestern traditional dishes which made a seat at her dinner table a coveted thing indeed.  Therefore, there is no written recipe for the meat dish that I'm going to share with you here, but this is one of my favorite main dishes that Grandma makes.  Even though Grandma had given up her wood cookstove about fifty years prior to concocting this recipe, this is a main dish that is particularly well suited to the wood cookstove.

You are going to first be browning some pork chops or pork loin slices.  If you know that your meat is lean, start with a little butter (I think a little bit of bacon grease tastes better) melting in the bottom of a skillet.  You just need enough to cover the bottom of the pan.

Then, brown as many pork chops or boneless pork loin slices as you need to feed those who will be around your table.  Season them as you like. 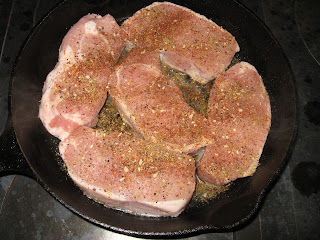 I cooked these directly over the firebox because I wanted that high heat which produces a good browned flavor.

While these are browning, mix a few tablespoons of flour into a cup of cold water. 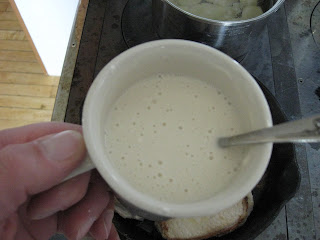 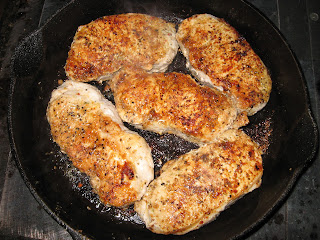 Once the chops are nicely browned on both sides, transfer them to a baking dish and put them in the warming oven so that they will stay hot while you make the gravy.

Now pour a little hot water from the teakettle into the skillet, loosening the nicely browned bits of meat and drippings from the bottom with a fork or whisk. 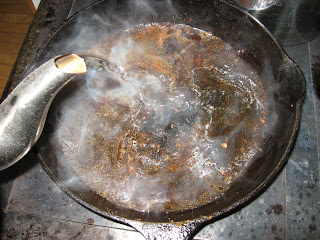 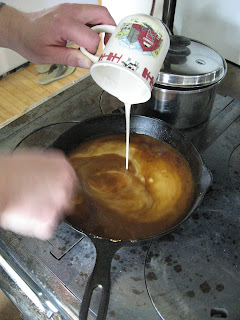 Pour the flour and cold water mixture into the skillet, stirring constantly with a fork or whisk to keep it from getting lumpy.  Season the resulting gravy to taste and let it boil rapidly. 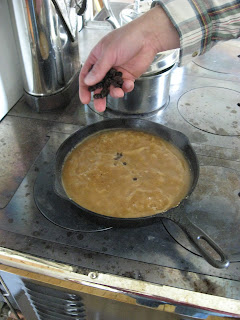 Add a couple of generous handfuls of raisins.  Grandma's preference is to use golden raisins, but I like any kind of raisin. 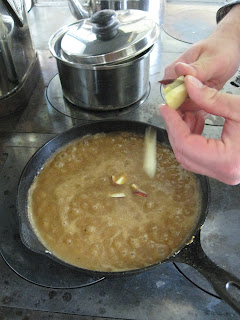 Slice an apple or two into the gravy, too. 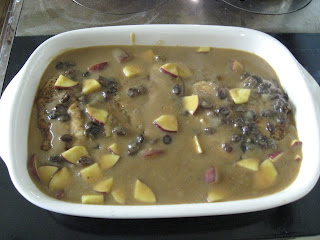 Pour the gravy over the chops in the casserole dish and pop the whole thing into the oven.

Bake until the pork chops are cooked through.  Depending on the temperature of your oven and the doneness of the chops when you took them out of the skillet, this could take anywhere between thirty minutes to an hour.  As it cooks, the smell of it almost reminds me of Thanksgiving since my family puts raisins and apples in the turkey dressing.

I think that this meat dish holds well once it is cooked.  You can bring it back up to the warming oven to stay hot until you are ready to serve the meal.  It's also nice because it is made of things that people generally would have on hand.  Give it a try.  I bet there's a good chance that you too will "even like raisins in gravy!"
Posted by Jim at 7:00 PM